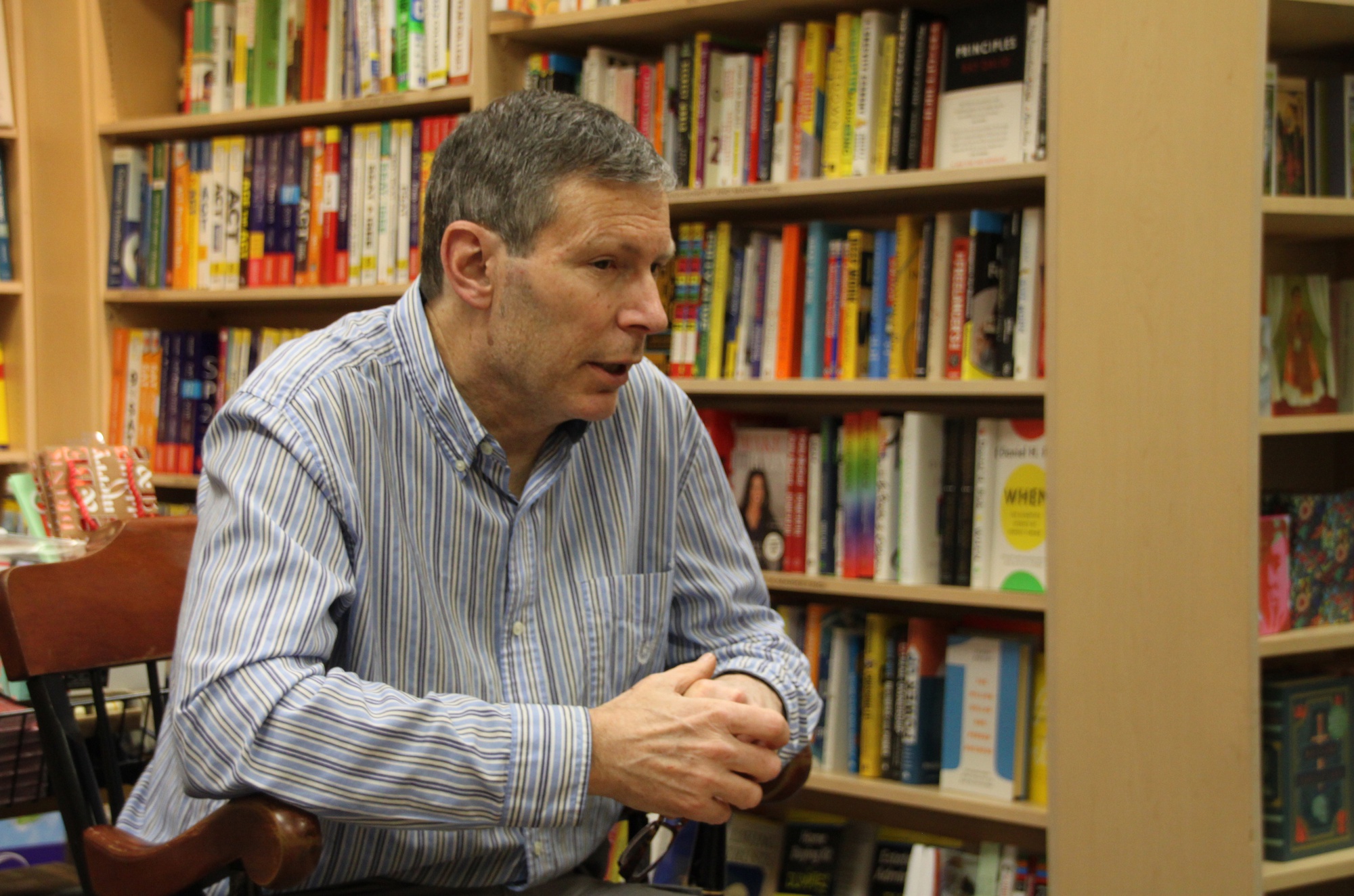 The owner of Porter Square Books offers his thoughts on the importance of independent bookstores in the age of Amazon.
Advertisement
Advertisement

The Indies: Threatened, But Thriving

On one side stands Amazon—vast, convenient, and cheap. On the other side stands small bookstores, promoting what Ryan L. Raffaelli, a Harvard Business School professor studying the industry, calls “the 3 C’s”: community, convening, and curation.
By Sonia F. Epstein

Behind the information desk at the Harvard Book Store, a red banner reads, “Find it here. Buy it here. Keep us here.” The store has long promoted independent retail, so when Chronicle Books released comedian John Oliver’s bestselling picture book solely through Amazon, it spoke out.

Oliver’s book parodies a picture book released by Vice President Mike Pence’s family. “Marlon Bundo’s Day in the Life of the Vice President” is a story narrated from the perspective of the Pence family rabbit. Oliver’s spoof, “A Day in the Life of Marlon Bundo,” describes the same-sex romance of the Bunny of the United States (BOTUS). The book’s profits will be donated to the Trevor Project, which supports BGLTQ youth, and to AIDS United, which seeks to end AIDS in the U.S.

“It almost just seemed like an afterthought that people are going to want to buy these books in bookstores,” says Alex W. Meriwether, the general manager of Harvard Book Store. “That was what was so frustrating. For a commentator who seems to think so much about the bigger picture, it seemed a little tone-deaf that that wasn’t thought of.”

In a March 23 email to the American Book Association, Chronicle Books President Tyrrell Mahoney apologized for the frustration caused by the book’s launch. “We had to ensure that the book was a complete surprise,” she wrote. “We ultimately agreed to make the book available for purchase at the time of the on-air surprise by allocating a percentage of the print run to Amazon and making the rest of the first print run available to all our other retailers as soon as possible.”

Oliver’s representatives from Avalon Management did not respond to a request for comment.

Secret book releases, though, are common—Oprah’s Book Club books form one prominent example. Publishers have thus established processes that allow stores to order books with access to only cursory information about their content.

“I’m not going to say it’s unprecedented, but I cannot think of a time this has happened before,” Meriwether says.

Harvard Book Store finally received its first shipment of Oliver’s book 10 days after its initial release on Amazon. “It's hard to estimate how many more we might have sold had we had books sooner, but I'm sure that we lost sales,” head buyer Rachel M. Cass wrote in an email.

Nonetheless, store employees say they are pleased the event re-sparked conversations about protecting local retail. The store’s response, staffers say, is less the panicked cry of a dying business than the defiant backlash of an industry threatened, but still thriving—for now, anyways.

The independent bookstore industry has certainly suffered. From 1995 to 2000, almost half of the country’s independent stores closed, unable to compete with chains like Barnes & Noble and Borders. By the 2000s, Amazon dominated the book industry, and was poised to reshape it entirely with the release of the Kindle in 2007. Even large chains could not compete—Borders closed in 2011.

But as Amazon expanded, the indies fought back. From 2009 to 2015, the number of independent bookstores in the U.S. increased by 35 percent, according to the ABA.

“In the last three, four, five years, the independent bookstore industry has done a much better job of getting the word out about the importance of shopping local and the real, insidious danger of Amazon to local economies,” says David Sandberg, an owner of Porter Square Books.

The result is a bifurcation of the book industry. On one side stands Amazon—vast, convenient, and cheap. On the other side stands small bookstores, promoting what Ryan L. Raffaelli, a Harvard Business School professor studying the industry, calls “the 3 C’s”: community, convening, and curation.

“There are tons of people who come through [Porter Square Books] because they want to come here with their kids, or they want to come for coffee with their friends,” Sandberg says. “If it was just a place to buy a book, and if we were just competing for price, we would lose. But we have an identity as a community space.”

At Harvard Book Store, lectures, author events, and book signings promote intellectual “convening.” Each week, the store holds “Friday Forums” at which scholars, including Harvard professors, speak on a range of academic subjects.

Brattle Book Shop has long owned its space in the heart of Downtown Boston, a product of decades-old foresight that has allowed the Gloss family to avoid today’s sky-high rents. Brattle distributes maps marking other local bookstores to their customers. Thus, Boston-area bookstores report having formed a cooperative, rather than a competitive, network.

“Over time, the buyers in a store learn their customer base,” Sandberg says. This allows for what Raffaeli calls “curation,” in which stores carefully select content that caters to their specific customers. Raven Used Books, a bookstore that specializes in scholarly works of philosophy and history, has particularly refined curatorial skills, and sells between a third and a half of its inventory every month.

“We have a constant turnover of stock and that allows us to make the rent,” says John Petrovato, the owner of Raven Used Books. “It’s all about nurturing them, the local community. I would say half our customers come in once a week, so we want to keep good, fresh books coming in.”

“It’s a matter of how every store owner adjusts,” Gloss says. He promotes his store in lectures, online, and through a self-produced podcast. “I keep the name out and I think our business will be fine.”

But the Internet has also crippled specialty bookstores: Globe Corner Bookstore, the Mt. Auburn shop that housed one of the largest map and travel book collections in North America, closed in 2011. Schoenhof’s Foreign Books was down the street, and closed last year after 161 years of business.

Nevertheless, local stores have learned to fill gaps left by the impersonal Internet. “The future feels more certain than it might have been in the earlier days of Amazon,” Meriwether says. “The indie bookstore uproar around the John Oliver roll-out is just an opportunity to bring those issues to the forefront again, to have this conversation again, to say, ‘Is price the only thing that matters?’”