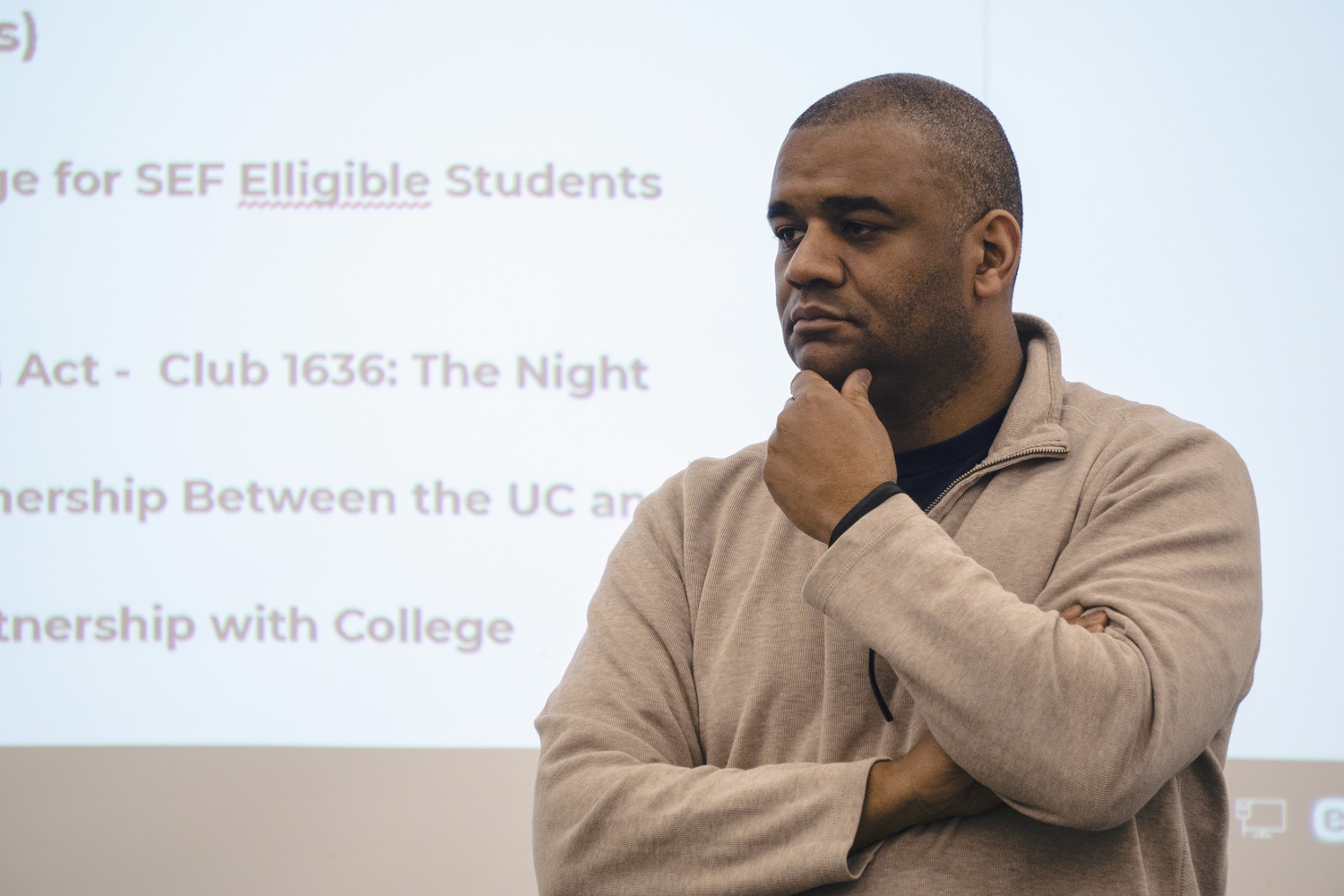 Associate Dean of Students for Diversity and Inclusion Roland S. Davis said Sunday that Harvard’s Office of General Counsel and Massachusetts Hall—traditionally a name for the University’s central administration—are “involved” in examining the Friday arrest of a black Harvard undergraduate.

Davis—who gave this update at a weekly meeting of the Undergraduate Council—said he is unsure whether or not “decisions have been made” with regard “to any kind of a formal investigation” of the incident. OGC comprises Harvard’s internal arm of lawyers who help legally represent the University.

“I do know that the Office of the General Counsel is involved, I do know that Mass. Hall is involved,” Davis said Sunday. “So I would imagine that some sort of investigative process is forthcoming, if it hasn’t already been initiated.”

University spokespeople could not immediately be reached for comment late Sunday evening.

Cambridge Police Department officers arrested the Harvard undergraduate Friday evening after the student and law enforcement engaged in a physical altercation. In the account of events CPD later published on social media, officers wrote the student—who was naked and who CPD determined had previously taken narcotics—clenched “both of his fists and started taking steps towards” the police, prompting officers involved to “grab his legs and bring him to the ground.”

But eyewitnesses of the event—including members of the Harvard Black Law Students Association—have stated CPD’s version of events is “incorrect” and have called the incident an instance of police brutality.

“A naked, unarmed Black man stood still on the median at the center of Massachusetts Avenue,” a statement later released by BLSA reads. “He was surrounded by at least four Cambridge Police Department (CPD) officers who, without provocation, lunged at him, tackled him and pinned him to the ground.”

“While on the ground, at least one officer repeatedly punched the student in his torso as he screamed for help,” the BLSA statement reads.

The CPD police report detailing the arrest states one officer involved in the incident punched the student at least five times while the student remained on the ground in an attempt to unpin his arms and handcuff the undergraduate. The student was ultimately charged on several counts including indecent exposure, disorderly conduct, and assault.

BLSA’s statement argues other Harvard resources—not CPD—should have been contacted and mobilized to come to the student’s aid before CPD got involved. In particular, the statement states Harvard University Health Services were contacted first, but that HUHS transferred the callers to CPD.

UC representatives questioned Davis Sunday as to why HUHS transferred the callers to CPD, with at least one student calling the decision “concerning.”

“And you should be concerned about that,” Davis said in reply. “There are a lot of questions that need to be answered. How CPD even became involved in this situation is the biggest one and I don’t have an answer to that right now.”

Davis encouraged UC members to put pressure on Harvard’s administration to demand an answer to that question. He told representatives they should “keep that a present and burning issue” before administrators.

“I think you, as the governing body of the undergraduate student population, you can ask those questions,” Davis said. “You may get answers in a way that I can’t.”

Quincy House Representative Sarah Fellman ’18 asked Davis whether there will be a meeting between students and representatives from HUHS and CPD. Davis said he does not yet know the “specifics” surrounding a potential meeting, but noted that administrators including Dean of the College Rakesh Khurana and Dean of Students Katherine G. O’Dair have been “in meetings all day” to discuss the issue.

Davis noted he himself will be in a meeting at 8 a.m. Monday morning “where I think some of that information will be conveyed.”

“When we know, then we’ll let people know,” he said.

Ivy Yard Representative Swathi R. Srinivasan ’21 also questioned Davis about the College’s amnesty policy and how “it kind of fell apart” during the Friday incident.

The amnesty policy states that, if a Harvard undergraduate brings “an intoxicated or drug-impaired friend” to HUHS or to another hospital—or to seek help from College residential staffers or HUPD—neither the student nor the friend “will face disciplinary action from the College for having used or provided alcohol or drugs.”

“I hope to hell it’s being looked at,” Davis said when asked why the amnesty policy was not applied during the Friday incident involving the student.

“I think what you all need answers to is why the system didn’t work the way you thought it should work,” Davis said at another point. “And I think you’re entitled to those answers.”

Some UC members described their plans to mobilize in the wake of the arrest at the Sunday meeting. Student Relations Committee chair Nicholas P. Whittaker ’19 called College students’ efforts to organize to date “quite extensive.”

“Salma [Abdelrahman ’19] and I and a junior at the College, Hilda Jordan [’19], are organizing some kind of body that’s trying to be a response and advocacy kind of body,” Whittaker said.

Whittaker said he and others involved with this organizing effort are currently “fundamentally focused” on helping and protecting the student involved in the arrest. In the days following the Friday incident, hundreds of Harvard affiliates gathered in meetings across campus to discuss the arrest, share concerns, and plan a response.

“The next steps are engaging in the larger conversation about how the University handles things like this and when it eventually get there, the national conversation,” Whittaker said. “We’re trying to mobilize as quickly as possible.”

Abdelrahman detailed steps she hopes the UC will take in response to the incident. She said she thinks the Council should issue a “statement of support and solidarity with black students” at Harvard and also with the arrested student. Abdelrahman also said the UC should hold a public meeting with the heads of HUHS and HUPD.

“I think these are all important measures, considering that we are the representatives of the student body,” Abdelrahman. “I also think that holding some of the administrative bodies accountable that were involved in this specific incident—so UHS, HUPD.”

Dunster House Representative Victor Agbafe ’19 asked Davis whether administrators are holding discussions with CPD and HUPD in the wake of the arrest about what constitutes “correct protocol” during an “escalating situation” like Friday’s incident.

“Dean Khurana pledged to get people in the room to have some of these conversations,” Davis responded. “I think one of the things that will need to come from that is a way to make sure that students understand what the policies are, what your rights are, and what you can expect in terms of your interactions with both HUPD and CPD.”

In an interview before the meeting, UC President Catherine L. Zhang ’19 promised to use her platform to “support students unequivocally.”

“Something went terribly wrong that night,” she said. “And there’s something that needs to be changed in understanding the ecosystem of how different things interacted, [which] will help us understand where we can put UC efforts to change it.”

Asked Sunday whether Harvard as an entity can take a “stance” on the student’s arrest, Davis said he was unsure.

“It would be stupid of me to speak for Harvard University,” he said. “I like my job. So I don’t know.”