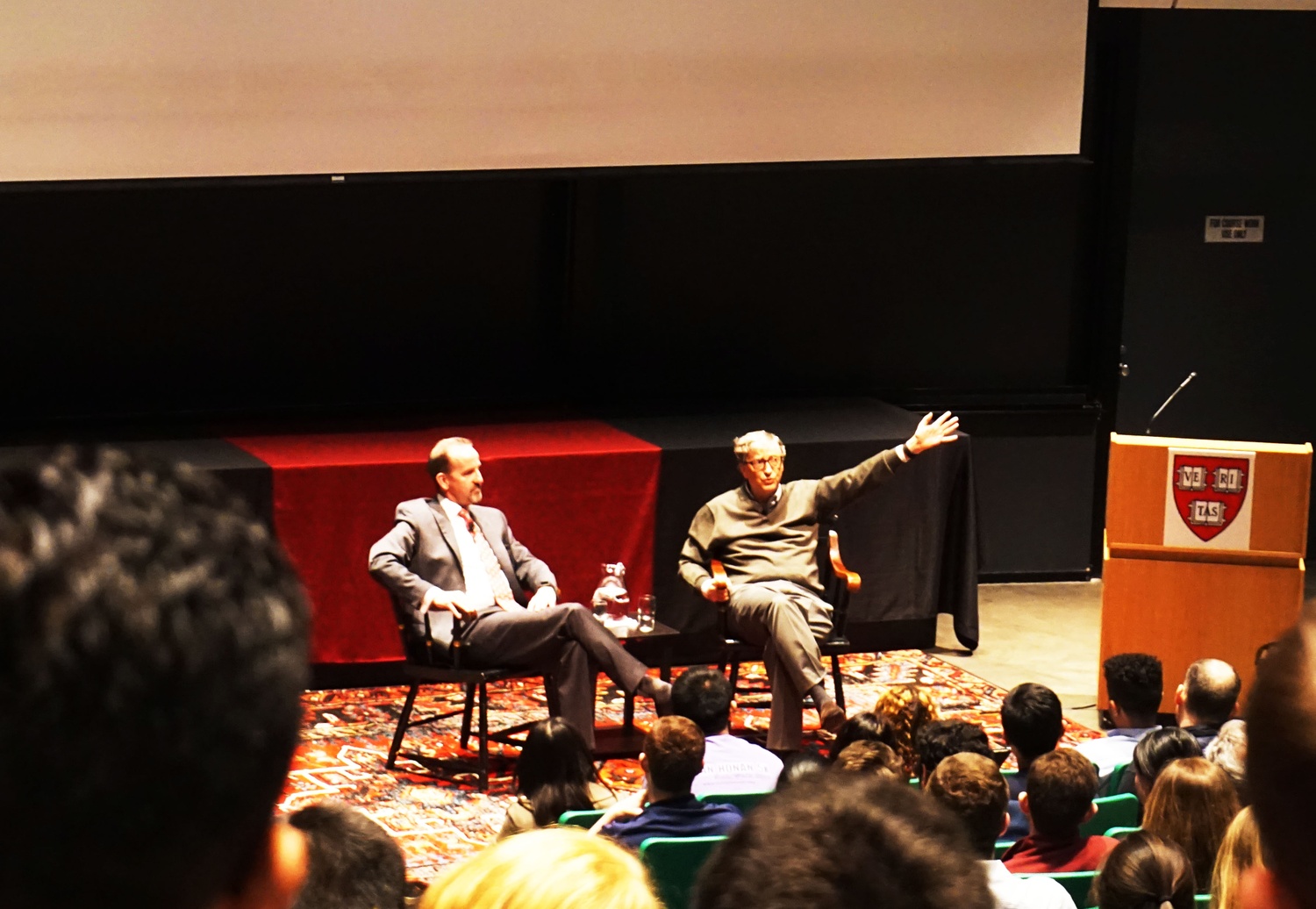 Bill Gates, Harvard’s wealthiest drop-out, returned to the University Thursday to visit labs and speak to hundreds of students from across Harvard’s schools about his career at Microsoft and philanthropy via the Bill and Melinda Gates Foundation.

At one point during his visit, Gates sat down with Francis J. Doyle III, the dean of the School of Engineering and Applied Sciences, to hold a public conversation before answering questions from the hundreds-strong audience. The conversation and question-and-answer session were both hosted by the Offices of the President and Provost.

Gates, who was on track to graduate with the College’s Class of ’77, wrote in an email after the event that it was great to receive the invite to visit.

“It was really interesting to hear what was on students’ minds during my Q&A with them,” he wrote. “We live in an exciting time with so much opportunity for people who love learning and want to contribute to the world in some way, and I’m sure Harvard students will continue to make a big impact.”

Gates took questions from students in the crowd about a variety of topics, many related to inequities in the education system, which he called the most significant issue facing the country.

During the event, Gates mentioned some of his Foundation's efforts to bridge the gap in access to education. He particularly mentioned the Gates Millennium Scholars Program, which grants students from low-income minority backgrounds the opportunity to pursue an undergraduate education in any discipline.

Despite this and other initiatives, Gates said the Foundation—which he said spends $800 million annually on education—has not been able to move the United States education system into the top three globally ranked systems.

“We have no noticeable impact after almost 20 years of working in that space,” Gates said. “But we’re committed.”

For higher education, the problem goes deeper than funding, Gates said. Asked about the lack of “scientific literacy” in Washington, Gates said the issue extends beyond politicians, calling understanding of issues like genetically modified organisms and climate change “very limited” among the general public.

“The problem is when you get issues—climate change being the best example—where scientific understanding is fairly important because the sacrifices have to be made now in order to get the benefit later,” he said.

“The statistic that I’d be most proud of is when we got started, there were 11 million children a year under the age of five who died every year and now that number has been cut in half,” he said.

Gates said he attributes the decline in early childhood death to the Foundation’s efforts to provide vaccines and medications to Africa and other parts of the world. The Foundation is on track to reduce the number of deaths to 2.5 million by 2030, according to Gates.

The next challenge for the Gates Foundation is to fully eradicate polio, he said, noting the global effort is “very close” to achieving this.

Heather M. Viola, a student at the School of Public Health who attended the event and will intern for the Foundation this summer, said she is “very excited” Gates brought up the polio initiative.

“I was hoping to have a little bit more detail on the technical side of some of the global health and things specific to disease eradication, but I think I’ll have to wait and hear more over the summer when I start work,” she said.

Apart from discussing his work, Gates joked about his time as an undergraduate, expressing a wish that he had been “more sociable.” Gates laughed about how classmate and eventual Microsoft CEO Steve Ballmer punched him for the Fox Club, one of Harvard’s all-male final clubs, to bolster his social life.

“There were these things called ‘men’s clubs’ and I never even would’ve known they existed, but Steve Ballmer decided I needed to have some exposure to, I guess, drinking. So he got me punched for the Fox Club so I’d go to those events,” Gates said.

On a more academic note, Gates discussed his experience with “Math 55,” a course he called the “hardest freshman math class at the time.” Gates assumed the class was no longer in existence.

“It is,” the audience resoundingly informed him.

Gates wrote in the email that, while much has stayed the same from his time as a student, some things have changed a lot.

“Access to information is a big thing—I used to stay up late and argue with my friends about some piece of information, and there was no way of proving who was right and who was wrong until the library opened up in the morning and we could research it,” Gates wrote. “Now, you can find the information online in an instant.”

Javier Cuan-Martinez ’18 said it was “surreal” to go from class to getting to see Gates speak.

“It was awesome to learn from him even if it was just for an hour and just seeing what his thoughts are on current events,” Cuan-Martinez said.