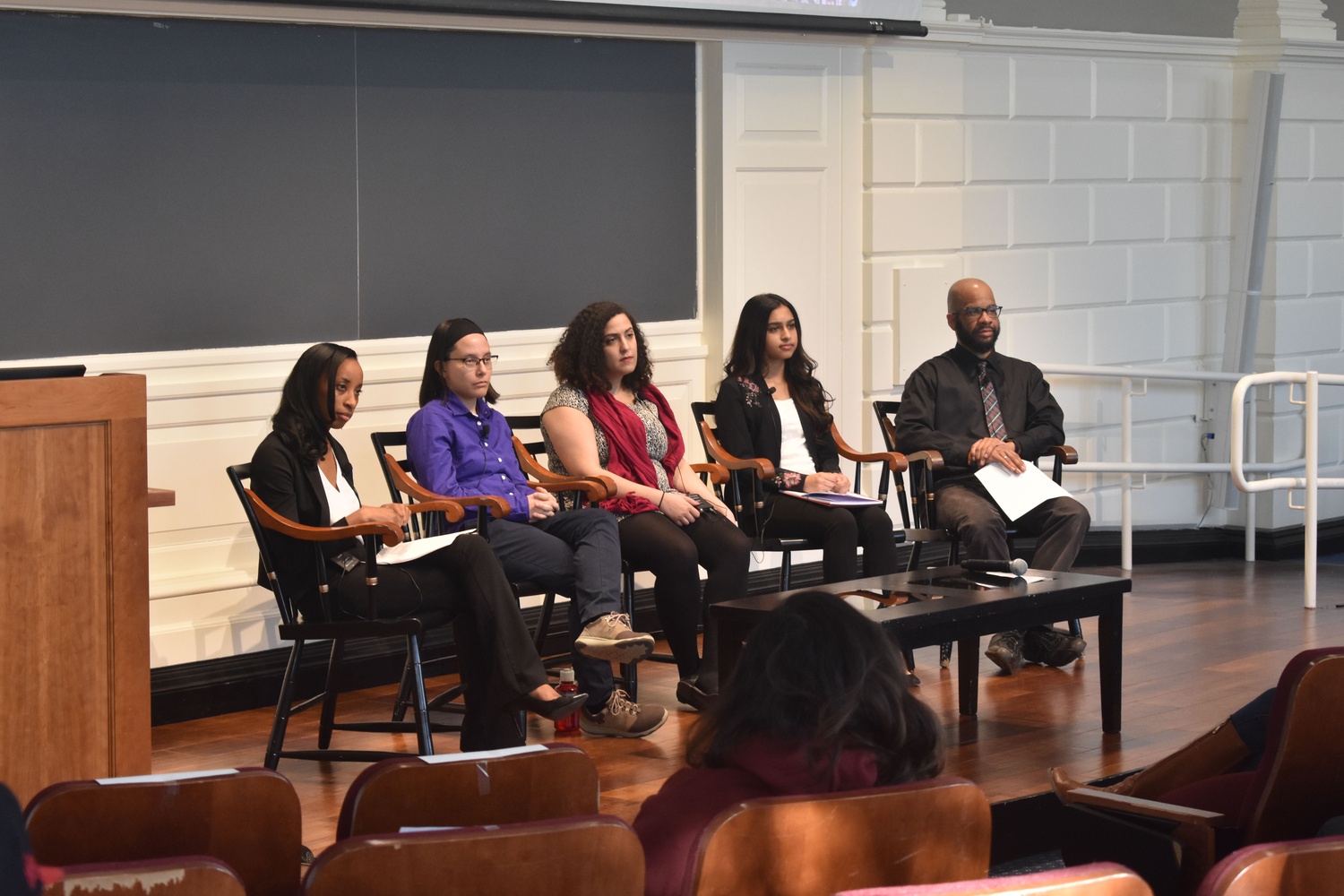 Scholars and activists discuss surveillance of Muslim and minority youth at a Harvard Graduate School of Education panel. By Karina G. Gonzalez-Espinoza
By Lainey A. Newman, Contributing Writer

The Harvard Graduate School of Education hosted a panel discussion Thursday on the effects of surveillance programs that target Muslim and minority youths in schools.

The discussion focused on the Countering Violent Extremism program, an anti-terrorism initiative being piloted in three U.S. cities—Boston, Los Angeles, and Minneapolis. The CVE program began under President Obama in 2011 to counter various types of radical thinking. The Trump administration has since shifted the program’s focus to primarily target Islamic extremism, according to Reuters.

Abeela Latif, an Equity and Inclusion Fellow at the School of Education focusing on International Education Policy, organized the event with the Muslim Justice League in conjunction with the Committee on Ethnicity, Migration and Rights. The MJL is based in Boston and works to advocate for communities “threatened under national security pretexts.”

“Until a few months ago, I had never heard of CVE,” Latif said. “So I set myself the task of educating myself about what CVE is. Once the picture started to take form, I realized that this is a critical issue, and it’s a critical time to have this conversation.”

The panel featured three experts and was moderated by Aaliyah El-Amin, a lecturer on education at the GSE, and Daren Graves, an associate professor of education at Simmons College. Alim H. Islam, a senior caseworker at CAGE—an advocacy organization for communities impacted by the War on Terror—called in via video-chat from London to discuss the United Kingdom’s anti-terror Prevent programme.

Islam related several case studies of young people persecuted by the Prevent programme, including a young man who wore a bracelet in support of Palestine to school one day and was subsequently tracked and interrogated by police officers.

Fatemah Ahmed, the deputy director of the Muslim Justice League, discussed the role of the U.S. government in the implementation of CVE programs. Since 2010, the Department of Homeland Security has given out more than $10 million in grants to implement CVE programs across the country, according to Ahmed. Programs often focus on specific communities. For example, one program in Boston focuses specifically on the Somali community—three of the five CVE grants that have been awarded to Boston target the Somali community, Ahmed said.

“People will say that CVE is community-led,” Ahmed said. “But when the community sees how CVE is being carried out, their members are definitely not happy.”

Aleena Durrani, of the Montgomery County Civil Rights Coalition, said that surveillance programs can be hidden from public knowledge by various program names.

“In Maryland, it’s called BRAVE—Building Resilience Against Violent Extremism,” Durrani said. “It’s essentially CVE, but it is disguised by a newer, brighter acronym.”

Latif says she hopes to follow this discussion with another event next semester.

“We just wanted to get the conversation started,” she said. “We hope to take a deeper dive into this issue in the fall.”