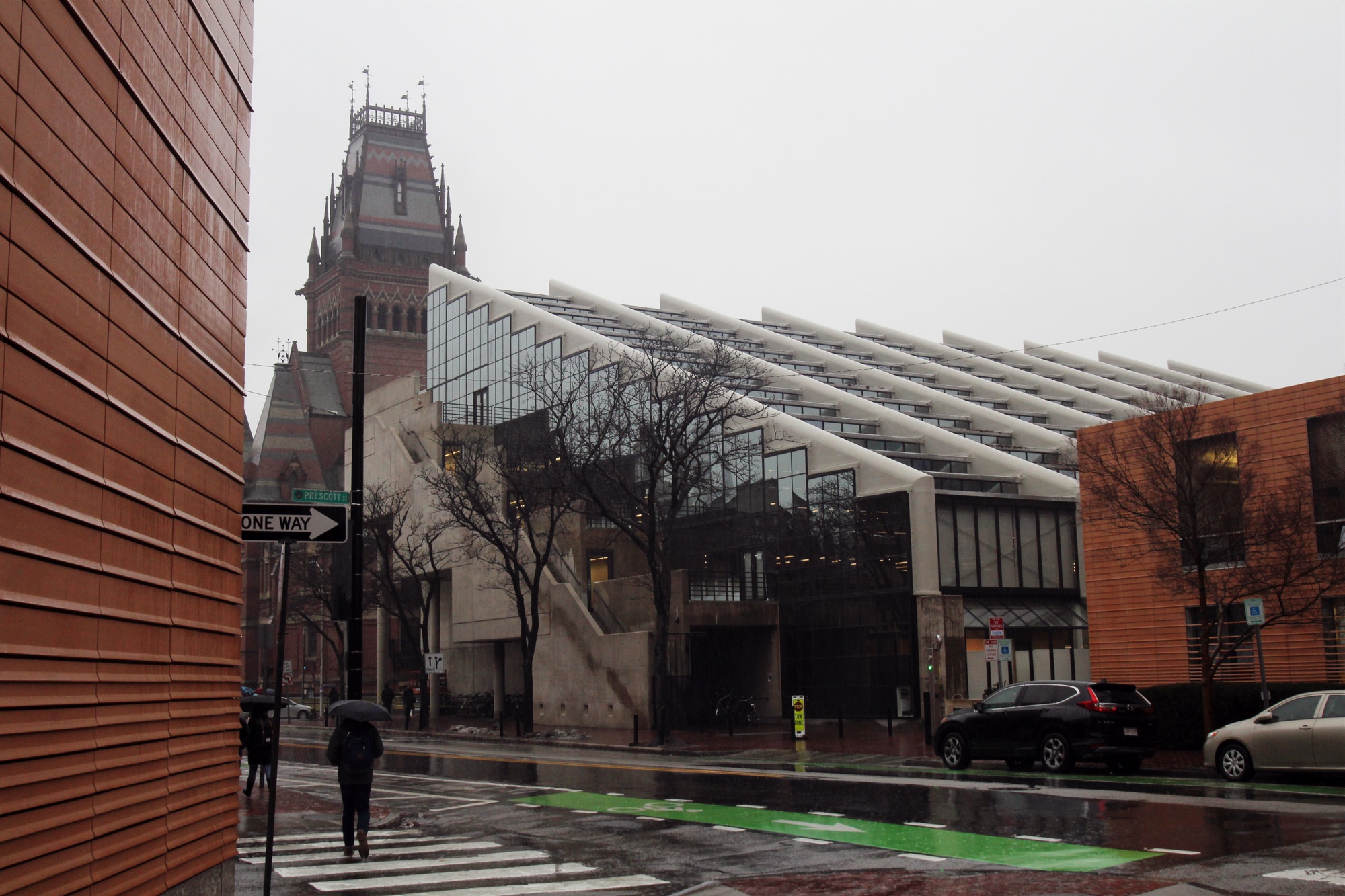 FM sat down with Griffin at her new exhibit in Gund Library, “Design for the Just City,” named after her popular class, to discuss justice in urban environments including Cambridge.
By Annie M. Goldsmith

Posters plaster the glass walls of Professor Toni L. Griffin’s Gund Hall office. Each one depicts a map of the United States with data broken down by region, alongside a large word: “Resilience,” “Rights,” “Identity,” “Fairness,” “Acceptance,” and many more. Griffin teaches one course per semester at the Graduate School of Design, each revolving around her idea of a “just city.” FM sat down with Griffin at her new exhibit in Gund Library, “Design for the Just City,” named after her popular class, to discuss justice in urban environments including Cambridge.

Editor’s note: This interview has been lightly edited for clarity and length.

FM: What are some of the core values of the “just city”?

TG: It’s recognizing that every city or neighborhood is really different, so there wasn’t just one catch all “just city.” A just Houston is gonna look different than a just Albuquerque or a just LA or a just Minneapolis or a just Topeka, Kansas. We wanted a way for communities to be able to define justice for themselves and what elements of a just city meant for them. Lastly, we wanted to create a set of indicators and metrics that would allow communities to actually evaluate whether or not they got greater equity, or they got greater participation, or inclusion.

Today I believe that the just city has to work towards helping those who are most marginalized in cities, have the same benefits of those that are more privileged in the cities. So, issues of ownership, belonging, inclusion, diversity, acceptance, power, access, are just some of the values that I think are most important to the just city.

FM: What do you see as some of the major problems big cities face today?

TG: In the work that I do as an urban planner, in cities like Chicago, New York, Memphis, Milwaukee, St. Louis, Detroit, I have consistently found issues of disinvestment, blight, abandonment, racial segregation, income inequality, environmental justice, and, in each of those cities, I’ve found the exact same conditions. Also, in each of those cities, I’ve found that that condition predominantly affects people of color, women, and children.

FM: What would you say are possible solutions to these inequities?

TG: In the exhibition we just opened here in the GSD, “Design in the Just City,” we’re featuring four case studies of projects that we believe begin to tackle some of these injustices around populations who feel invisible, spaces that segregate, processes that don’t include and provide for inclusive participation, or spaces that intentionally have excluded people. The four projects include the 11th Street Bridge Park project in Washington, D.C., which is taking an old highway bridge trestle and turning that into a park, that actually it bridges both sides of the Anacostia river. The west side of the river is a predominantly wealthy Capitol Hill neighborhood, the east side of the river is predominantly African American and is where a lot of African Americans were pushed out of communities during urban renewal in the 1960s and 70s. The bridge designed by OMA+OLIN partners is designed to obviously connect both sides of the river through the bridge structure, but has a number of programmatic features that are really intended to be a place where people come together. Spaces are situated in such a way that people from the west, more wealthy side of the river have to come across to the east side of the river to enjoy different amenities, like an environmental education center. So, putting those spaces there is facilitating a reason for people who ordinarily wouldn’t go to that side of the city to come to that side of the river and vice versa. There’s this intentionality of the programming that was placed there, and where it’s placed on the river, to help bridge communities and bridge people of difference in coming together.

FM: That sounds great. You live full time in New York but spend two days per week in Cambridge. What are some ways Cambridge can become more “just”?

TG: Cambridge is continuing to grow, both in terms of the local economy here, particularly around Kendall Square—it’s growing in population, but there’s not a lot of room to grow. So issues of affordability were certainly some of the more challenging conditions of injustice that the students [in the course last spring] saw on the ground. A lot of their propositions for justice had to do with how do local communities, particularly diverse communities of color, retain a sense of ownership and identity in a fast growing city with a fast growing economy. How to ensure that their identities aren’t erased from the fabric of how the city looks and feels, both in terms of the identity of the physical environment, but also the amenities and services that different populations, particularly foreign born populations, need in this city. Looking at ways to retain ownership, a material ownership of property through land trust and housing cooperatives that help build equity at the household level, for families to stay in Cambridge were just a few of the things that [the students] began to look at and propose.

FM: Is there anything Cambridge has done particularly well?

TG: I know that the city last year commissioned a citywide master plan and, as part of that, set up a number of different platforms to increase civic participation in the process of making a plan and a vision for the city. One of my colleagues was part of developing the tools and strategies to be used to be as inclusive as possible in that process. Many cities defer doing citywide master plans—they’re complicated, they take a long time, and to be done well they really should include as many voices as possible in that process. So, I think it’s great that the city has taken on the challenge of trying to put that forward-thinking vision forward, and to try to do that in a way that is inclusive of community voices. I think planning is done best when it’s not done by a single sector. So it’s not just the city’s plan, it’s not just the community’s plan, I think you have to bring all of those stakeholders to the table and really kind of work those issues out simultaneously. I think that planning is still in process, but I think that’s a smart thing to do particularly in a city that’s growing rapidly to try to get in front of the kind of issues that it’s facing and to try to put forward a shared vision for how to address them.