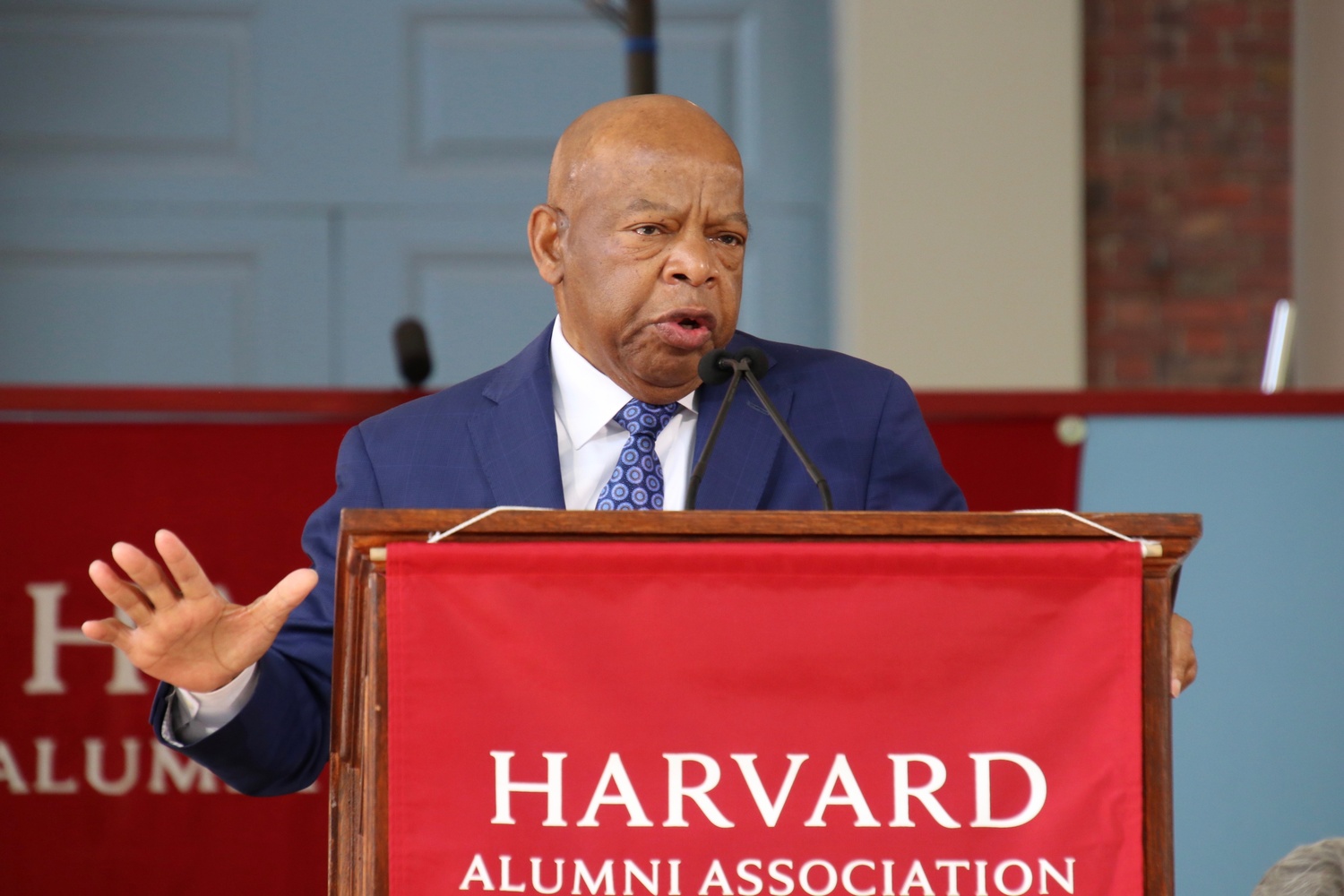 Congressman and civil rights leader John R. Lewis told students and alumni they “must lead” and implored them to get into “good trouble, necessary trouble” during his Commencement address Thursday.

Lewis—who spoke during Afternoon Exercises, the Harvard Alumni Association meeting that comprises the second portion of Commencement Day programming—told students and alumni they are “never too young” and “never too old” to lead.

“Take a long deep breath, and take it all in,” Lewis said. “But tomorrow, I want you to roll up your sleeves. The world is waiting for talented men and women to lead it to a better place.”

Lewis, a decorated icon of civil rights in the United States, has represented Georgia’s 5th congressional district for over 30 years. He was one of the “Big Six” leaders who organized the March on Washington in 1963 and he helped lead the 1965 march across Edmund Pettus Bridge in Selma, Ala. Lewis was awarded an honorary doctorate of law degree from Harvard in 2012.

Lewis devoted much of his speech to what he characterized as America’s challenging political climate, urging students and alumni to “save our democracy.” Lewis urged the crowd to fight for social justice and to protect the planet from climate change. He exhorted the audience to bring about these changes through voting rather than violence.

This year marks the 50th anniversary of the assassination of Martin Luther King Jr.—another member of the “Big Six”—in 1968. Lewis, who worked with King, recalled the sadness and frustration he felt when he learned about his friend and fellow activist’s death. He advised audience members to focus on the “hope” of the future rather than the tragedies of the past.

“Today, we have to get rid of our tears and not be down,” he said. “We have to be hopeful and keep the faith and turn the ship of state around.”

Lewis drew praise from University President Drew G. Faust, who delivered her final Commencement address after his speech. Faust plans to depart her post in June after more than a decade in office; President-elect Lawrence S. Bacow will succeed her.

“There can be no finer example of how to live a life than that of John Lewis,” Faust said.

In her own speech, Faust said she has “hope” students can face the challenges of what she called a “damaged world.” Faust dwelled at length on the swelling anti-higher education sentiment in the public sphere, especially as it relates to Washington, D.C.

“At a time of growing distrust of institution and constant attacks on colleges and universities, I want to affirm my belief that they are beacons of hope. I think our best hope for the future to which we aspire,” Faust said. “At their very essence, universities are about hope and about the future and that is at the heart of what we celebrate today.”

Faust also reflected on her tenure, joking that she and the first iPhone were “launched” within 48 hours of each other in June 2007. Since then, Faust said, the University has faced many crises including the Great Recession, cases of sexual misconduct, and attacks on higher education with the dawn of the Trump era.

But Faust also applauded what she described as a burgeoning culture of student activism, mentioning movements like Black Lives Matter, Divest Harvard, #MeToo, and the activism of undocumented students on campus.

Faust said the “privilege” of interacting with Harvard’s faculty, students, and staff has “uplifted” her throughout the past decade.

Before Faust’s speech, outgoing HAA President Susan Morris Novick ’85—in a surprise move—awarded Faust the Harvard Medal, a prize recognizing extraordinary service to the University. Though the HAA had announced three other winners of the prize ahead of Thursday’s meeting, Novick told the audience in the middle of the ceremony that she planned to give an additional award to Faust.

Novick called Faust a “pioneering president” and a “global ambassador for higher education.” Novick also praised the outgoing president for her efforts to make Harvard a “more inclusive” campus and lead the University “through change and storm.”

In her speech, after hearing Novick’s praise, Faust emphasized Harvard’s “work is unfinished.”

“The job remains still to be done. And time have made that more difficult than ever,” Faust said. “May we continue to challenge ourselves with the hope of all we can be and the unwavering determination to be that. May Harvard be as wise as it is smart, as restless as it is proud, as bold as it is thoughtful, as new as it is old, as good as it is great.”