Roughly 30 percent of surveyed members of the Harvard Faculty of Arts and Sciences say they know at least one person in their department who has experienced sexual harassment.
By Angela N. Fu and Lucy Wang 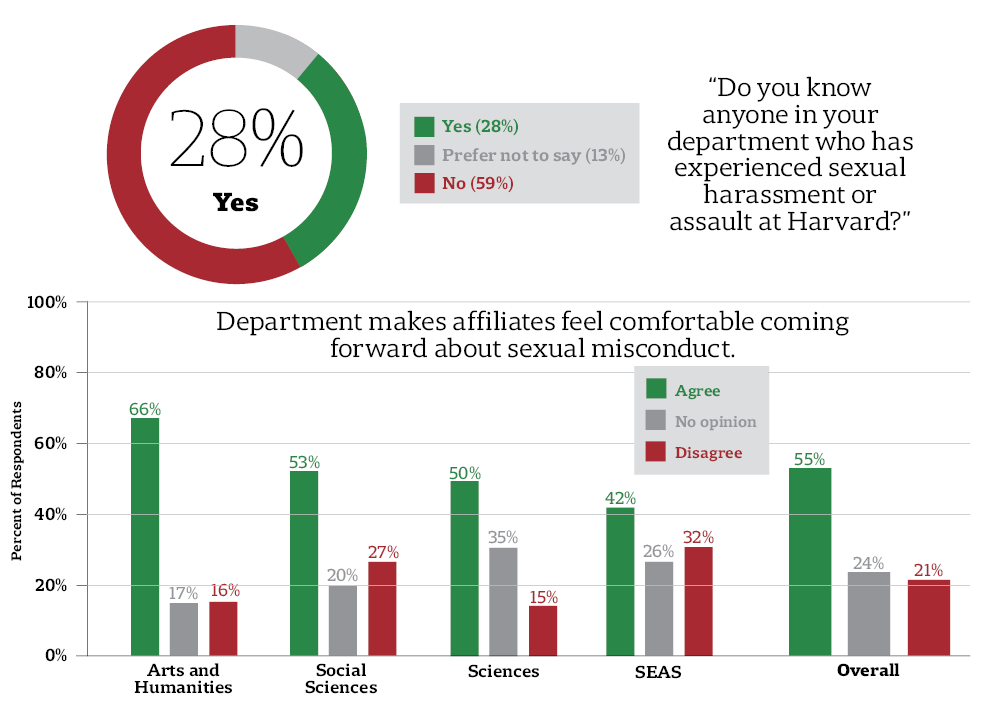 Roughly 30 percent of surveyed members of the Harvard Faculty of Arts and Sciences say they know at least one person in their department who has experienced sexual harassment or assault at the University.

The Crimson’s faculty survey also revealed that a majority of respondents believe their respective departments foster an environment in which affiliates feel comfortable coming forward about instances of sexual misconduct. A majority of respondents also said they “agree” or “strongly agree” with the University’s response to allegations of sexual harassment made against Government Professor Jorge I. Dominguez.

The 54-question survey garnered roughly 500 responses, representing more than 40 percent of the Faculty, though not all respondents answered each question. The anonymous survey, emailed to nearly every member of the FAS, was open from April 17 to April 30. The Crimson adjusted the data reported in this story by respondents’ ladder status and divisional affiliation (see below for methodology).

Reports of sexual harassment at Harvard have risen in the past few years.

The Office of Dispute Resolution, which investigates allegations of sexual misconduct, saw a 65 percent increase in formal complaints from the 2015-2016 academic year to the 2016-2017 academic year. ODR also reported an increase in complaints late last year in the wake of the #MeToo movement, a social media campaign asking women to post stories of sexual harassment and assault using the hashtag #MeToo.

When asked whether they they know someone in their department who has experienced sexual harassment at Harvard, 28 percent of survey respondents answered “Yes,” while 13 percent of respondents indicated “prefer not to say.” The remainder answered “No.”

The survey also asked respondents whether they agreed with the assertion that their departments create “an environment where students, faculty, and staff feel comfortable coming forward about instances of sexual misconduct.”

Compared to the other three divisions, the School of Engineering and Applied Sciences saw the lowest percentage of affiliated respondents indicate they “agree” or “strongly agree”—42 percent.

SEAS also saw the highest percentage—32 percent—of affiliated respondents indicate they “disagree” or “strongly disagree” with the idea their respective departments foster environments in which affiliates feel comfortable speaking up about sexual misconduct.

Sixteen percent of Arts and Humanities respondents also selected “disagree” or “strongly disagree,” while the Social Sciences and Sciences divisions saw 27 percent and 15 percent of respondents do so, respectively.

Near the start of the 2018 spring semester, allegations of sexual misconduct perpetrated by Government professor Dominguez garnered national attention and prompted criticism of the University’s set procedures for investigating incidents of sexual harassment.

The Chronicle of Higher Education reported in February and March that at least 18 women are accusing Dominguez of repeated acts of sexual harassment across nearly four decades. After the allegations became public, FAS Dean Michael D. Smith announced that FAS would conduct a “full and fair” review into the accusations and that Dominguez was being placed on paid “administrative leave.” Shortly after Smith’s announcement, Dominguez, who is currently on sabbatical this semester, announced he will retire at the end of the school year and immediately stepped down from his administrative positions.

The Crimson’s survey asked faculty how they felt about the Harvard’s approach towards the allegations against Dominguez. The majority of survey respondents—58 percent—reported they “agreed” or “strongly agreed” with the University’s actions. Nineteen percent indicated they “disagreed” or “strongly disagreed.”

The Crimson reported in April that FAS has filed a Title IX complaint against Dominguez. Once a formal complaint is filed with the Title IX office—which deals with the federal policy that prohibits sex and gender-based discrimination including sexual harassment—ODR investigates the allegations laid out in that complaint.

But several of the women accusing Dominguez of harassment have said that Harvard is “ill-equipped” to adequately investigate Dominguez. The women have pointed to a variety of factors including what they call a lack of resources and a previous failure to recognize Dominguez’s decades of alleged harassment.

Survey respondents were evenly split in their opinions of the Title IX office and the ODR.

Thirty-seven percent of respondents reported they “agree” or “strongly agree” that the Title IX Office and the Office of Dispute Resolution are adequately equipped to deal with issues of sex and gender-based discrimination on campus. Thirty-one percent indicated they “disagree” or “strongly disagree” with that idea. Thirty-two percent reported feeling “neutral.”

By contrast, respondents hailing from SEAS were least likely to report feeling confident in the offices’ ability to investigate sex and gender-based discrimination; 14 percent indicated they “agree” or “strongly agree” while 55 percent reported they “disagree” or “strongly disagree.”

The Crimson reweighted all responses by ladder status and divisional affiliation—the two demographic categories which saw the most significant areas of response discrepancy. These reweightings did not produce any changes greater than plus or minus 2.5 percent from the unadjusted percentages.