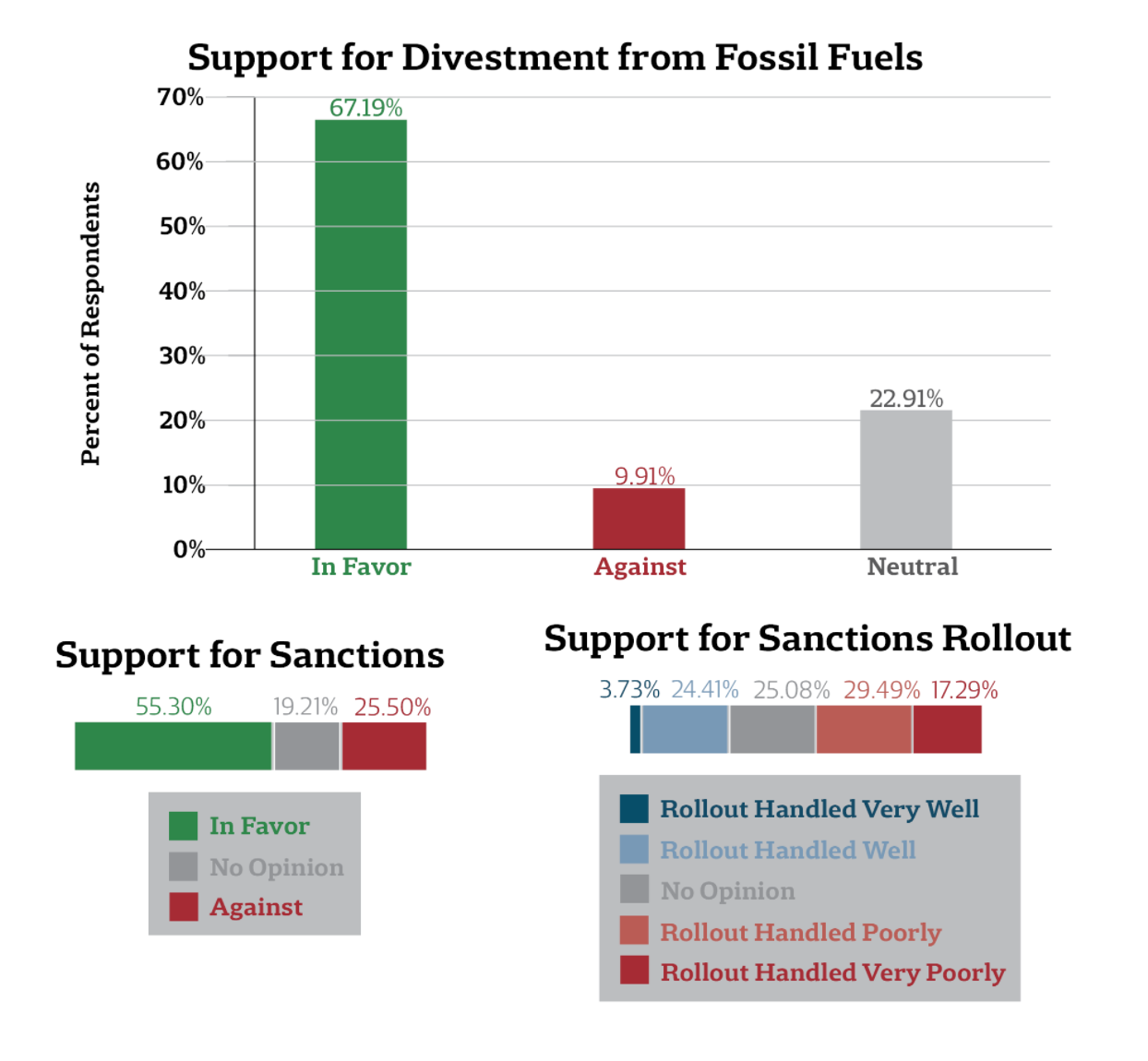 A significant majority of the Harvard Faculty of Arts and Sciences—67 percent—believe the University should divest from fossil fuels, while a slightly smaller majority—55 percent—support the College’s controversial social group penalties, according to a faculty survey conducted by The Crimson.

While faculty broadly indicated they agree with Harvard’s attempts to regulate undergraduate social life, a plurality of respondents reported they believe the administration handled the rollout of the policy “poorly” or “very poorly.” The sanctions, which took effect with the Class of 2021, bar members of single-gender final clubs and Greek organizations from varsity team captaincies, campus leadership positions, and from receiving College endorsement for certain prestigious fellowships.

The 54-question survey garnered roughly 500 responses, representing over 40 percent of the faculty, though not all respondents answered each question. The survey, emailed to nearly every single member of the FAS, was open from April 17 to April 30 and was anonymous. The Crimson did not adjust the data for possible selection bias.

The past several years have seen the implementation of multiple milestone policies on campus, ranging from the historic social group penalties to updates to the decade-old General Education program. Then there are the policies yet to pass—including administrators’ repeated refusal to divest from fossil fuels and the possible elimination of “shopping week,” the class selection period held at the beginning of each semester and beloved by students.

The first installment of The Crimson’s faculty survey series examines how professors regard these key shifts.

Student calls for Harvard to divest from fossil fuels recently found new urgency—over the past three years, members of student advocacy group Divest Harvard twice occupied and shut down administrative buildings to protest Harvard’s ties to the coal industry. In April 2016, three Divest Harvard students were arrested for demonstrating in the downtown offices of the Harvard Management Company, which oversees the University’s endowment.

But University President Drew G. Faust has not budged, repeatedly arguing divestment would harm the health of Harvard’s $37.1 billion endowment.

Most faculty agree with the protesters. In total, 67 percent of faculty respondents indicated they believe Harvard should divest from fossil fuels, while just 9 percent reported they disagree with that proposal.

Support for the policy differed along gender lines. Women were more likely to be supportive of the sanctions than were men—among female respondents, 66 percent indicated they support the policy, while 51 percent of male respondents did the same.

Faculty views on the sanctions also correlated with political leanings. Sixty-one percent of respondents who identified themselves as “liberal” or “very liberal” elsewhere on the survey supported the penalties, while just 35 percent of self-identified “moderate” or “conservative” respondents did so.

Professors reported feeling less content with the way administrators have debuted the policy. A plurality of respondents—46 percent—indicated they believe the College handled the rollout of the penalties “poorly” or “very poorly.”

Faust first announced the penalties in May 2016. Nearly two years of administrative deliberation followed—including the creation of two different committees, two Faculty-wide votes, and three separate reports totaling more than 90 pages. Administrators at times sought to revise the policy, once recommending Harvard ban social groups altogether. The Crimson reported in July 2017 that that suggestion garnered only seven votes from the 27-member committee that proposed it, making it the third-most popular option considered.

The committee later walked back its proposed ban and admitted it “did not reach consensus.” In Dec. 2017, the Harvard Corporation stepped in and voted to officially approve the original sanctions as debuted in 2016.

Administrative attempts to regulate undergraduate social life also did not alter most faculty members’ opinions of Smith. The vast majority of respondents—roughly 70 percent—said the penalties did not change how they evaluate Smith’s job performance.

Respondents were split on whether the Faculty was properly consulted during the formulation of the College’s social group policy—a flashpoint for conflict across the past year-and-a-half. Thirty-five percent of respondents indicated they feel faculty gave enough input, while 29 percent reported feeling professors were not properly consulted. The additional 35 percent reported no opinion.

Overall, just 22 percent of those surveyed said they felt the University’s path to approving and implementing the College’s social group policy encroached on the authority of the Faculty.

Forty-four percent of respondents disagreed, while the remaining 34 percent indicated they had no opinion.

Faculty discontent with an alleged lack of involvement in crafting the sanctions led to at least two separate Faculty motions designed to kill the penalties over the past year. Only one of these motions came to a vote at a Faculty meeting, where it was ultimately defeated after 130 professors voted against while 90 voted in favor.

The Crimson’s survey comes at a time when administrators and faculty are plotting and positing major changes to Harvard’s undergraduate academic offerings.

At a faculty meeting early last month, professors discussed the benefits of instituting an early registration system and cancelling the long-running “shopping week,” a one-week period at the beginning of the semester during which students can freely walk in and out of classes before officially enrolling. The suggested registration system would require students to select classes they would like to take before the start of the semester.

Professors in the Arts, Humanities, and Social Sciences were more likely to support early registration than were Sciences and Engineering professors.

Faculty cited a number of concerns with shopping week. The Crimson’s survey offered a pre-written menu of possible complaints, though respondents could also write in their own grievances.

66 percent of Faculty members who responded to the survey indicated they think Harvard should abandon shopping week.

Administrators are currently reforming the College’s General Education requirements. The changes, approved in 2016, come in response to a May 2015 report that found the program was “failing on a variety of fronts.” The changes—which would restructure and reclassify the classes required under the program—are set to take effect in fall 2019.

Reweighting all responses by ladder status and divisional affiliation—the two demographic categories which saw the most significant areas of response discrepancy—produces nominal changes from the unadjusted results reported in the main body of the story.

Adjusting data on faculty opinions of the College’s social group policy suggests that 54.68 percent of faculty broadly support Harvard’s attempts to regulate undergraduate social life, 26.93 percent do not support the sanctions, and 18.39 percent have no opinion. By comparison, the unadjusted data shows that 55.38 percent of respondents support the policy, 25 percent do not support the penalties, and 19.62 percent have no opinion.

Adjusting data on faculty opinions of shopping week yields no changes greater than the precision of unadjusted data reported in the story.

Separately adjusting data on faculty opinions of all five issues discussed in the story by gender or minority background yielded no changes greater than plus or minus 0.8 percent to the response category percentages reported in this story.

Editor's Note: This article has been updated to include a Methodology section discussing The Crimson's data-gathering procedures as well as the paper's understanding of the collected data, including corrections to the raw data made using publicly available information regarding the demographics of the Faculty of Arts and Sciences.