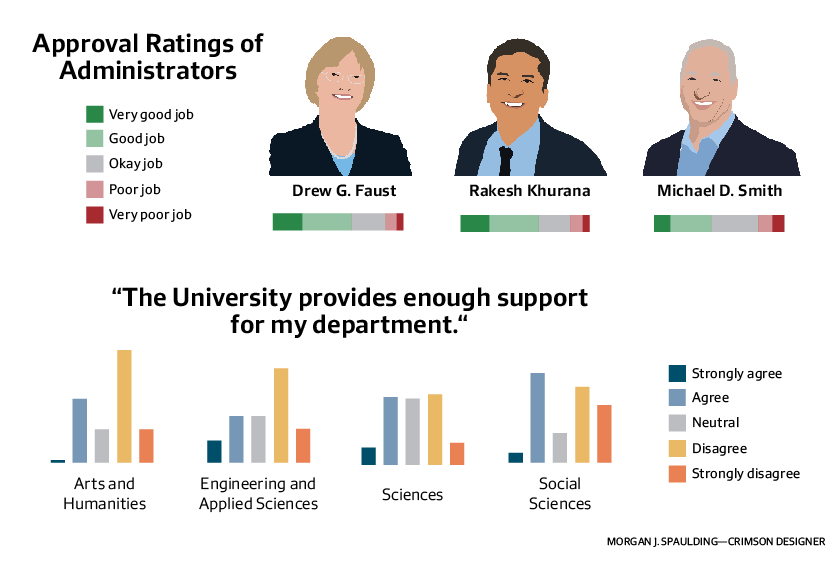 Roughly half of surveyed members of the Harvard Faculty of Arts and Sciences do not believe the University provides enough support for their department as a whole, according to a survey conducted by The Harvard Crimson.

The survey also revealed that a majority of respondents believe University President Drew G. Faust, Dean of the College Rakesh Khurana, and Dean of FAS Michael D. Smith are doing “good” or “very good” jobs. A plurality of respondents—42 percent—moreover believe the University’s current initiatives meant to improve diversity are sufficient, according to the survey.

The 54-question survey garnered roughly 500 responses, representing more than 40 percent of the Faculty, though not all respondents answered each question. The survey, emailed to nearly every member of the FAS, was open from April 17 to April 30 and was anonymous.

The Crimson reweighted data reported in this installment by ladder status and divisional affiliation (see below for methodology).

Nearly half of survey respondents reported they believe their respective departments lack sufficient support from the University.

Overall, respondents reported mixed feelings on whether their departments’ atmospheres are conducive to a healthy division between work and personal life.

Thirty percent of respondents indicated they “agreed” and 7 percent indicated they “strongly agreed” with the suggestion their department culture reflects a good work-life balance.

A majority of respondents—59.6 percent—feel valued as scholars, according to the survey. When asked to evaluate the statement “I feel valued as a scholar,” 19 percent of respondents answered they “strongly agree” and 40 percent answered they “agree,” though another 17 percent responded they feel “neutral.” Seventeen percent, however, indicated they “disagree” and 8 percent indicated they “strongly disagree.”

These numbers were largely consistent across divisions with the exception of the School of Engineering and Applied Sciences, in which 34 percent of which faculty answered “disagree.”

The University has taken several steps in recent years to improve diversity on campus. University President Drew G. Faust assembled a committee of professors, staff, and alumni in 2016 to study issues of diversity at Harvard. The group, dubbed the Task Force on Inclusion and Belonging, released its final report in March.

“Achieving excellence across these pursuits requires bringing a broad diversity of perspectives, methods, and experiences to bear on any given area of study or discovery. In other words, academic excellence requires diversity and inclusion,” the report reads.

The survey—which comes on the heels of this report—indicated a plurality of FAS faculty believe the University’s efforts to make Harvard more diverse are sufficient. Forty-two percent of respondents indicated they “agree” or “strongly agree” with the statement “FAS/the University is doing enough to diversity Harvard,” while 26 percent chose “neutral,” and 32 percent answered “disagree” or “strongly disagree.”

Responses differed along gender lines. Among respondents who identified as male, around half—49 percent—said they “agree” or “strongly agree” that the University’s current diversity initiatives are adequate. Twenty-six percent of female respondents indicated the same.

Harvard has seen a number of challenges and controversies across the past decade—ranging from the 2008 financial crisis to the 2012 Government 1310 cheating scandal to the more recent, convoluted debut of the College’s social group sanctions. Forty-six percent of respondents to the survey indicated they believe Harvard handled the rollout of the penalties “poorly” or “very poorly.”

Nonetheless, a majority of respondents reported they think three of Harvard’s top administrators—Faust, Smith, and Khurana—are performing their jobs well.

In general, less than half of survey respondents—41 percent—reported they had attended an FAS faculty meeting in the past six months. FAS holds these meetings monthly.

The Crimson’s survey asked respondents about their age, sexual orientation, and annual income. The survey also asked about gender and race—but, given the University already tracks and publicizes demographic information on the gender and race of FAS ladder faculty that is likely more accurate, The Crimson is not reporting that data in this article.

The majority of survey respondents—55 percent—reported their ages as falling between between 25 and 45 years of age. Of the people within this age range, 49 percent identified as female or genderqueer/nonbinary.

Among respondents who reported they fall in the 46 and over age bracket, 35 percent of respondents indicated they identify as non-male.

The Chronicle of Higher Education reported that the average salaries of tenured professors and associate professors at Harvard in 2016 were $221,382 and $124,965, respectively. FAS salaries increased by only 1.5 percent for fiscal year 2018.

A plurality of respondents who indicated they are tenured professors—41 percent—reported that their annual income falls between $121,000 and $250,000. The vast majority—69 percent—indicated their income amounts to at least $121,000.

The Crimson reweighted all response percentages mentioned in this story by ladder status and divisional affiliation, the two demographic categories which saw the most significant areas of response discrepancy in the main story.