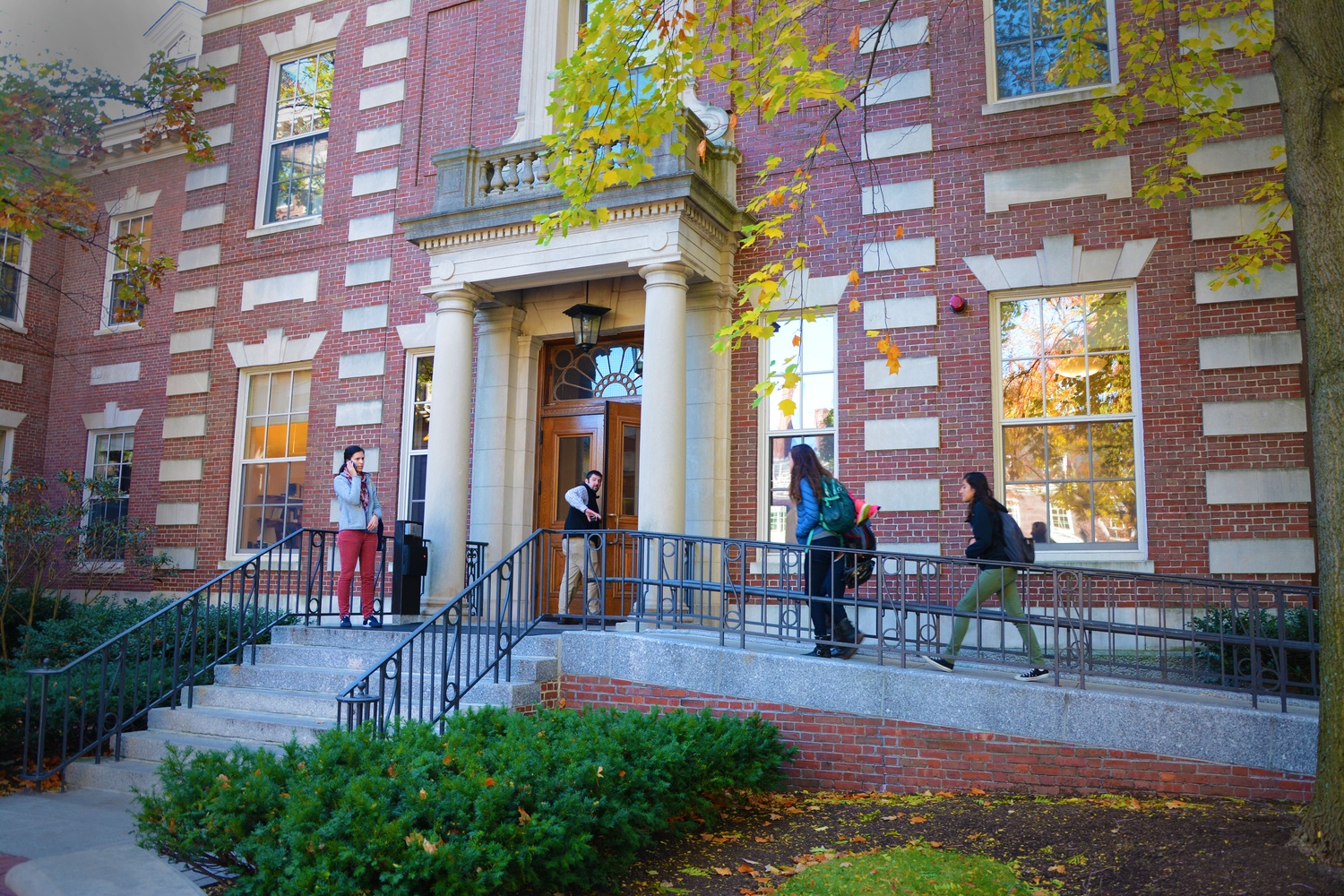 Students and faculty flow in and out of the Barker Center, home to the Humanities Center at Harvard, on a Monday morning. By Annie E. Schugart
By Angela N. Fu and Lucy Wang, Crimson Staff Writers

Nearly 50 Harvard student and alumni organizations signed a letter last week addressed to President-elect Lawrence S. Bacow calling for the next Dean of the Faculty of Arts and Sciences to develop a formalized ethnic studies program.

The groups—which called themselves the Harvard Ethnic Studies Coalition—penned their letter as Bacow leads the search for the next Dean of FAS.

“The next Dean of FAS must be a leader who prioritizes the need for ethnic studies at Harvard, engages regularly with ethnic studies scholarship, and possesses the vision to establish an academic entity that can bring together students, scholars, and faculty,” the Coalition’s letter reads.

Current FAS Dean Michael D. Smith announced in March he would step down after 11 years in the position, but will continue to serve until Bacow finds his successor.

In the months following Smith’s announcement, Bacow has met with faculty and students across FAS to solicit input on the search. In March, he notified FAS affiliates that he had created an advisory committee comprised of various faculty for the search.

“We felt it [the letter] was a really important opportunity as stakeholders, as alumni and students, to provide our input and I think in many ways this is something that matters to a lot of students and alumni,” Seo said. “It’s something that a lot of alumni, especially, assume has already happened.

The letters are the most recent effort in a decades-long campaign to create an ethnic studies field at Harvard. Since 1972—the year when students first pushed for an ethnic studies program—students have submitted 12 proposals calling on Harvard to invest in the field. The Ethnic Studies Coalition sent its own proposal in 2016, which called on University President Drew G. Faust and other administrators to establish a department of Ethnic Studies. More than 1,000 students, alumni, faculty, and staff signed the 2016 petition.

FAS’s current Ethnic Studies offerings include a secondary in Ethnicity, Migration, Rights or Latina/o Studies, and students who concentrate in History and Literature can specialize in the concentration’s newly created Ethnic Studies field.

“It is clear that FAS must find a way to redress the fragmented and neglected state of ethnic studies across various programs at Harvard and establish an FAS-wide entity dedicated to ethnic studies,” the Coalition’s letter reads.

Peer institutions including Yale, Stanford, Columbia, and Brown currently offer academic programs on ethnicity and race, according to the letter.

“Harvard lags behind its peer institutions because it does not invest in the field that is producing the most crucial scholarship for understanding the racialization of people of color in the United States and beyond,” the letter reads.

FAS is currently working to expand its course offerings in “fields of priority to EMR and the ethnic studies track in Hist & Lit,” according to an emailed statement from FAS spokesperson Rachael Dane.

“[T]he FAS administration is having promising conversations about how to strengthen its programs in studies related to ethnicity, migration, and indigeneity, and the FAS is pursuing new faculty to further strengthen the its offerings,” Dane wrote.

Seo said he and the Ethnic Studies Coalition would continue to work with student and alumni groups to advocate for the issue.

"We are basically bringing together so many different organizations, representing on their behalf their desire and interest in ethnic studies,” Seo said. “And I think these kinds of coalitions are really powerful ways for us to bring attention to the issue."