'Like Fire in the Middle' of Harvard Yard: Baldwin-Inspired Sculpture Draws Viewers 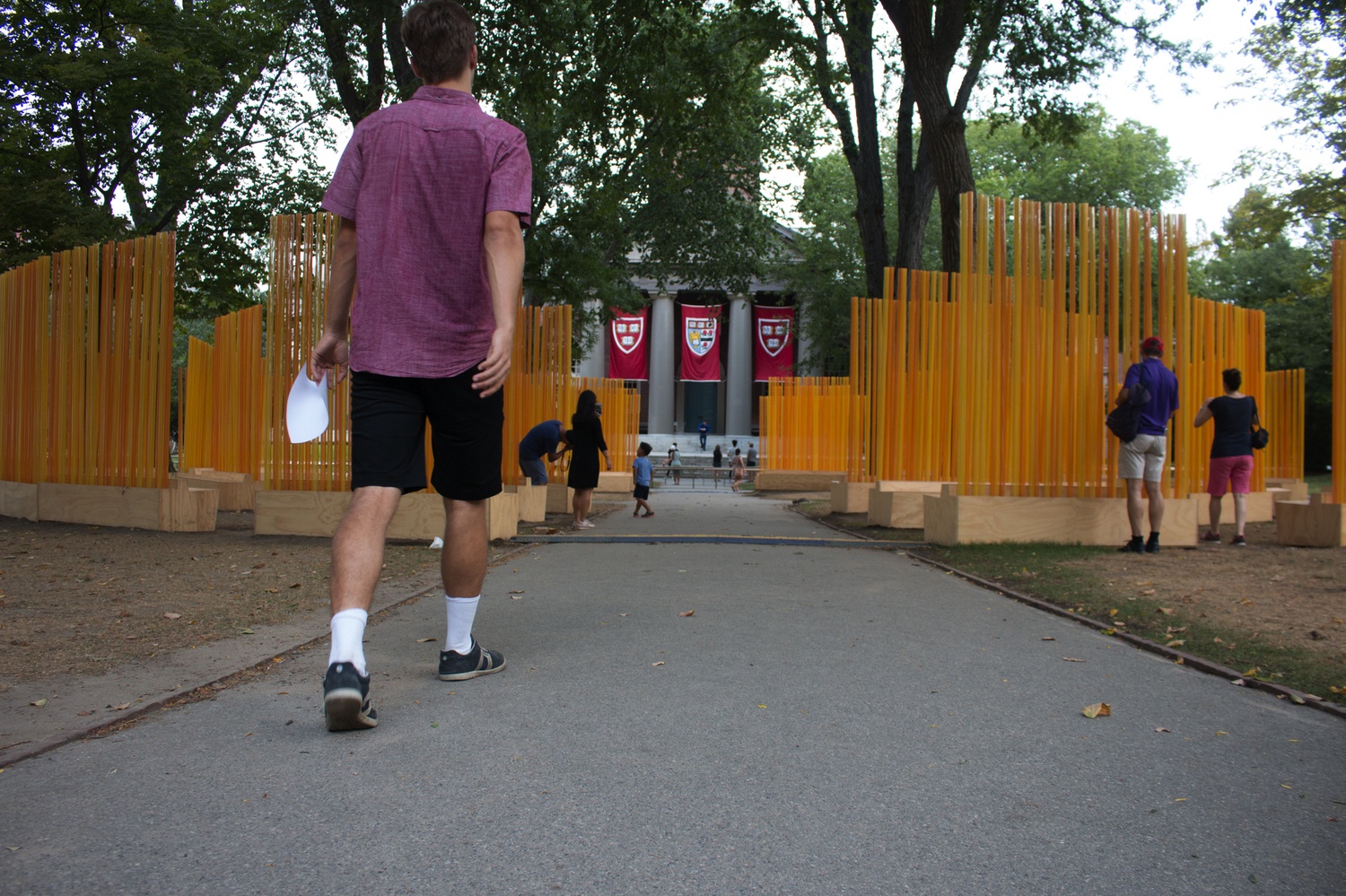 The Harvard University Committee on the Arts commissioned artist Teresita Fernández to create the sculpture “Autumn (...Nothing Personal)," which is inspired by a 1964 James Baldwin essay and will remain in Harvard Yard until early October. By Caleb D. Schwartz
By Andrea M. Bossi and Annie C. Doris, Crimson Staff Writers

A recently erected art installation titled “Autumn (...Nothing Personal)” and inspired by a James Baldwin essay will remain in Tercentenary Theatre throughout the month of September, serving as a space for events, discussions, and public viewing.

The Harvard University Committee on the Arts commissioned artist Teresita Fernández to create the sculpture. The installation comprises concentric rings of long, curved wooden benches with backings made of semi-illuminated yellow and orange tubes. Planning for the sculpture, which was fully installed in the Yard August 27, began two years ago.

“I knew I wanted to create an artwork that wasn’t passive, that didn’t just get ‘plopped down’ on the Harvard campus,” Fernández wrote in an email. “I developed dialogues, met with many individuals, collaborated, brainstormed, and formed relationships at Harvard for almost two years in order to create a work that people could feel invested in.”

Fernández taught a course at Harvard entitled “Arts, Imagination, Democracy: Public Arts in Practice” in Jan. 2018 as part of the College’s Wintersession program. She wrote the course served as “preparation” for her work on the sculpture.

“The students were involved from the beginning in thinking about what it could mean to imbue a built structure with democratic practices and research,” Fernández wrote.

The project also drew on contributions from Harvard affiliates such as Amanda Figueroa, a Ph.D. candidate and an intern for the committee on Ethnicity, Immigration, and Rights. To plan for the sculpture, Figueroa said she dug into the Harvard archives to learn more about Tercentenary Theatre.

“In terms of landmarking this space, not only does the installation work in the horizontal dimensions and provide a resting space, but the poles that come up also disrupt that visual line of sight and again just make it even more of a spotlight even more of a stage, even more of a landmark here,” Figueroa said.

Fernández wrote that the installation is meant to evoke Baldwin’s 1964 text “Nothing Personal,” published in collaboration with famed photographer Richard Avedon during a pivotal moment in the Civil Rights Movement. The essay-length book examines the state of life in America at the time. Fernández wrote that she sees Baldwin’s work as containing elements of “loneliness, despair, and violence” but also of “light and trust.”

“It is Baldwin's essay that inspired my use of the vulnerable light of autumn as a metaphor for a nation still struggling so desperately with the same issues Baldwin so eloquently exposes,” Fernández wrote. “During the day, it feels like an immense zoetrope, shimmering and flickering reflections and shadows of the overhead Elm trees with people moving through it; at night there is lighting built into the work so it looks like fire in the middle of the Yard.”

Lori E. Gross, associate provost for arts and culture, said Baldwin’s references to light made it a “very important” element of Fernández’s work.

“The essay builds on itself but it ends up with the idea of light and that there’s light at the end of some things that are often dark,” Gross said. “I think that it’s actually a very hopeful message at the end of some very complicated ideas and times, both in ’64 and now.”

“The intention is to have a series of public conversations where we will read the Baldwin text together in this space and also using the Baldwin text in course-work, in group discussions, with student groups as a jumping off point for creative responses that will continue a conversation beyond this physical structure," Molinski said.

Fernández wrote that upcoming readings of Baldwin’s essay at the sculpture are also designed to evoke a sense of “public intimacy.” She said human interaction with and around her work is a key part of the sculpture.

Prior to this one, Harvard  commissioned other art projects including “John Harvard Speaks,” a video installation in which the John Harvard Statue was temporarily animated with students’ faces and voices.

The art space will be open to the public and will continue to host events until its removal on October 1.