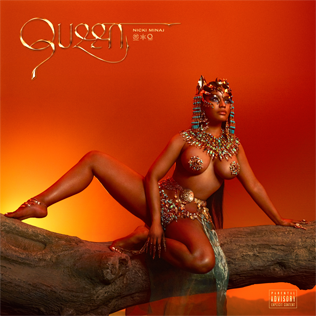 If we are to understand the music industry as a feudal system of strongmen and loyal followers, then queendom Minaj is under siege. It has been four years since Nicki Minaj has put out a proper album, and time has not been kind to her. Embroiled in a slew of controversies and faced by adversaries old and new, the musician has been disappointingly unsuccessful in responding by either public statement or rap feature. Thankfully, her new album “Queen” is levelheaded, tempered with the maturity that develops from guarding your position on top. However, the collection of tracks is its own war of attrition: able to hold its own and not devoid of victories, but laborious nonetheless.

As an established act, it seems like Nicki Minaj has finally realized she does not need to grandstand. Opening track “Ganja Burns,” is not at all a triumphant return track. Instead, there’s a spiritual, restorative quality to it. Wispy and smoke-like, the piece has a charmingly subdued guitar motif in the background that seems to blink in and out of existence (a Nicki mirage of sorts). The feeling carries on into the bouncy “Majesty,” featuring big names Eminem and Labrinth. Rather than heavy-handedly gassing each other up like one might expect, the artists create a high energy love song, as if unbothered by the outside world—Minaj’s only comment to detractors is the repeated “Jealousy is a disease, die slow.” With that, she joins the pantheon of giants who realize that the best defense is not offense, but indifference.

If Minaj is going to be made out to be a villain, it will be on her own terms. “Barbie Dreams,” a new take on “Just Playing (Dreams)” by The Notorious B.I.G., manages to pull off a good faith onslaught of her rap contemporaries. Funky, referential, and made possible by genuine industry friendships, the song demonstrates that good digs are good digs, regardless of whether they have malice behind them. Though she does get in a few disses later on in the album, the pivot away from the relentlessly acerbic is invigorating at a time when the media is insistent on pitting female rappers against one another.

This faux-“evil” Nicki comes to a head in the Chun phase of the album. Minaj has been heavily criticized for cultural appropriation in her single “Chun Li,” where she declares, “They paintin’ me out to be the bad guy / Well it’s the last time you’re gonna see a bad guy do the rap game like me.” Self-aware and backed up by hard bars, the track and persona offer a burst of energy before the album begins to drag. What’s unfortunate, however, is that she leans too far into the whole Chun image. “Chun Swae,” featuring Swae Lee in an act of title-play that feels a bit on the nose, really does not do its counterpart justice. Papered with weird production, pitched up vocals, and an outro that drags the song past six minutes long, it makes one wonder what part of the Chun essence she wanted to capture.

There is a difference between being self-assured and self-indulgent, and the album at times clearly lapses into the latter. It is a fact of nature: 19-song albums face an entropic drive towards tedium. And while some might argue that a four-year hiatus should be justification enough to showcase a larger selection of work, many of the choices in the album don’t hold up. The outros of songs, for example, often do nothing to add to them: “Rich Sex,” which was already feeling a tad vapid and trend-chasing (compounded by Lil Wayne’s whiny contributions), sinks further as Nicki asks “You mad, doggie?” in its final moments. The “2 Lit 2 Late Interlude,” a repetitive structural track which only exists to gel the album together, leaves listeners restless rather than refreshed.

Moving through the album feels like moving through brackish water: potent, then muddled and dilute. Songs such as “Thought I Knew You,” “Run and Hide,” and “Come See About Me” are mostly or completely sung, and while Nicki’s voice is not unpleasant, it is incapable of bringing the edge that her rapping does. While her attempt to open up and be sentimental is appreciated, one can’t help but wonder if a stripped, confessional-style rap flow might have better conveyed the love and heartbreak unsuccessfully packaged in those tracks. Hearing the marimba-backed spitting of “LLC” and the throwback-Roman pickup at the end of “Barbie Dreams,” the overabundance of sedated singing feels like squandered real estate. At the very least, the decreased reliance on a recurring pop hook would have tightened the album.

It is perplexing why Nicki does not play more to her strengths. While lengthy albums have become her modus operandi, the identity crisis in this one is particularly sophomoric. “Pink Friday: Roman Reloaded” threw everything at the wall to see what stuck. “The Pinkprint” stretched itself out with mostly unearned sentimentality. “Queen,” a supposed answer to that, masqueraded itself behind sick bars and backslid. There’s nothing inherently wrong with a bulky record, but smothering a great project with “Pinkprint” B-sides is unforgivable. And most frustrating of all is the fact that Nicki seems to at least peripherally understand this: In “LLC,” she near-pejoratively writes that “It’s two girls getting more money, and they don’t rap, they sing songs.” So give us strained metaphors. Give us shameless name-dropping. Don’t give us melancholic head voice. We already have the Billboard Top 100 for that.

After an aimless midsection, Nicki closes strong with “Coco Chanel.” Joined by Foxy Brown, Nicki returns to her New York roots, ending the album with swagger. The feature is a great foil to Nicki, providing thudding rap delivery that plays well against her partner’s swaying sound. Hearing this track, I get the sense that this album would have been just as appropriately titled “Queens.” Nicki has demonstrated that she can hold her own in both the rap landscape and share spotlight without losing stature. Moreover, she has not lost the crisp flows and New York attitude which earned her a following. Yes, the album is long and unwieldy at times. But all who hope to witness a de-crowning are going to have to keep waiting. As Nicki so knowingly reminds us, those who covet die slow.