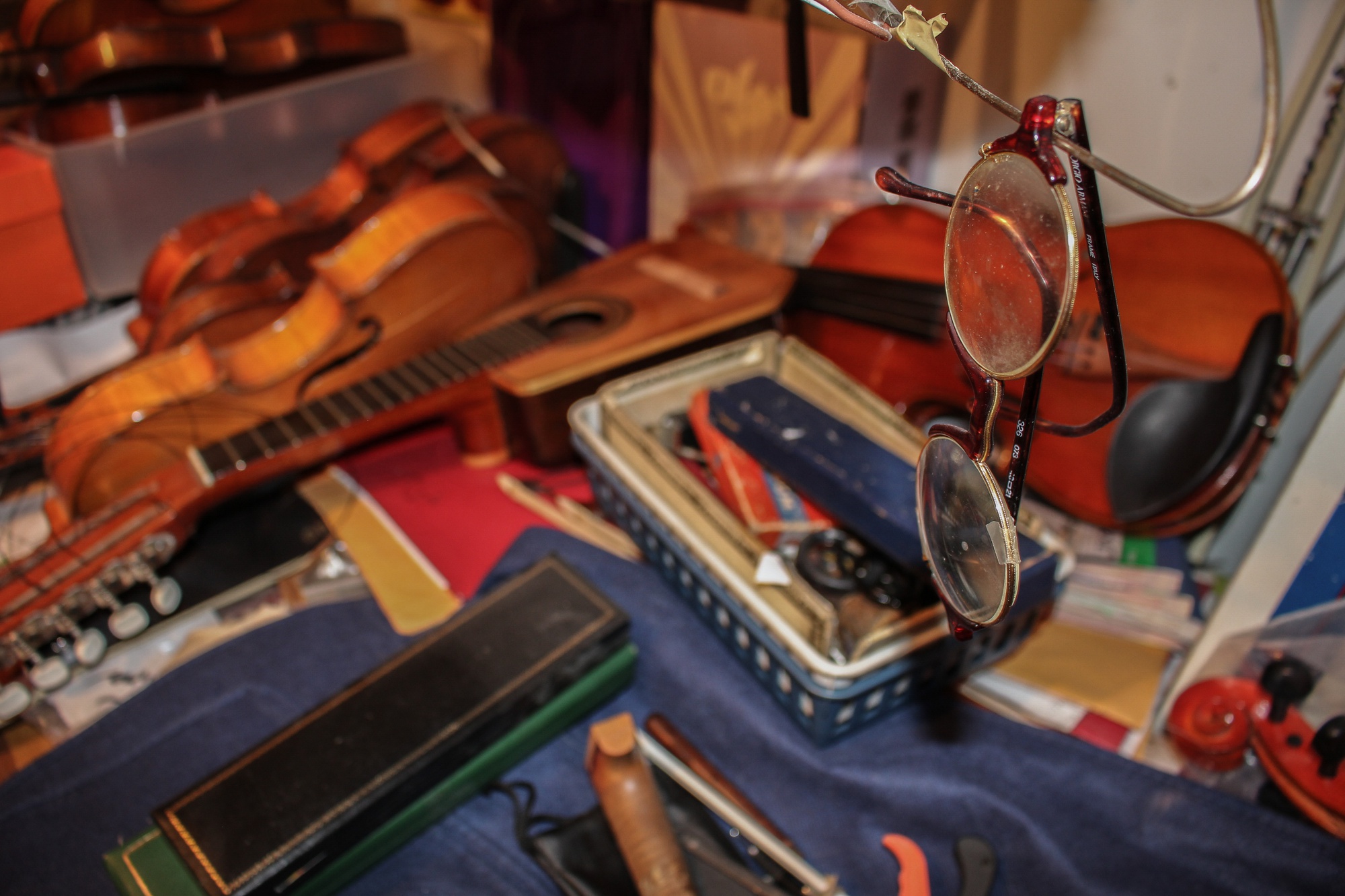 Cambridge Violin, a violin repair shop in Harvard Square, has been run by Germaine M. Carbury-Breau since 1981.
Advertisement
Advertisement

A display case at street level bears a sign with peeling letters that says “VIOLINS VIOLAS CELLOS BOWS REPAIRS SALES” and an arrow that points 45 degrees up toward a door that leads to a staircase with 16 steps.
By Matt B. Hoisch

Cambridge Violin is on the second floor of 50 JFK St., across from Staples and Shake Shack and above Amorino. A display case at street level bears a sign with peeling letters that says “VIOLINS VIOLAS CELLOS BOWS REPAIRS SALES” and an arrow that points 45 degrees up toward a door that leads to a staircase with 16 steps. At the top is another door, coated in hand- written notes, magazine cut-outs, and duct-taped aphorisms like a scrapbook accumulating memories and snippets of knowledge: a Dolly Parton quote scribbled on printer paper that says “If you want to see a rainbow you got to put up with the rain”; a hand carved wooden sign that says “Violins”; a placard that reads “Entrée Des Artistes.”

“Someone called it ‘Dickensian,’” Germaine M. Carbury-Breau says of the violin repair shop that she opened in 1981. The repair room is small: 10 feet by 20 feet. A workbench in the middle is surrounded by brushes in jars and small blades on hooks. There are also piles of books on subjects ranging from Homer to cooking to art history. Stringless violin bodies hang along the walls.

“Those will be mostly for parts,” Carbury-Breau says; a side or a rib. The body of a standard violin is 14 inches long. But the sizes and the colors of the violins Carbury-Breau repairs can vary, especially with older violins. So a stock of proverbial organ donors is helpful for any violin repair person.

“I always loved music,” Carbury-Breau says, “from the time I was born.” Raised in Canada with French ancestry, she learned guitar and taught herself violin. She grew up listening to country music years before she became interested in classical music.

“Where I come from, because of the mountain range — it goes through Maine — you couldn’t get a Boston station on the radio to save your life. But you could get southern stations for some reason,” she says. “We knew about Nashville way before Bostonians ever did.”
Carbury-Breau grew up speaking French, but for her “À propos des violins, c’est plus facile pour moi de parler en anglais” — it’s easier to discuss violins in English.

She immigrated to America over 50 years ago. Several years after that, she was working in a biology lab and running an antique shop. A man approached her about breaking in the lease for a property he owned in Harvard Square. She jumped at the opportunity.
“I thought, ‘Holy cow,’” Carbury-Breau recalls. “To me, Harvard Square was heaven.” She laughs. “He said, ‘Do you think you can look at it?’ I said ‘Is tomorrow morning too late?’”

Eight to 10 million people pass through Harvard Square each year, according to Denise A. Jillson, the Executive Director of the Harvard Square Business Association. Jillson says local business owners  owners know their markets and their consumers, and they “can be very nimble and very flexible” when it comes to reacting to what customers want.

Violins require precise repair. Tools that measure to within a millimeter hang above the workshop area in Cambridge Violin. To produce sound, energy from the vibration of the violin strings travels through a carefully calibrated network of woodwork and air pockets. Play the A string and hear 440 vibrations per second, the result of details that boil down to the movement of molecules. So each broken violin demands a slightly different fix.

“I have probably repaired a thousand violins,” Carbury-Breau says. “I’m not sure that I’ve ever done the same on two violins.”
Each violin is personal. “The instrument is very intimate,” Federico Cortese says. Cortese is the music director of the Harvard Radcliffe Orchestra, which Carbury-Breau has serviced in the past. “There is something — it’s hard to explain,” Cortese says. “The feeling that an instrument has a problem is a little bit like ‘my ankle hurts.’ It’s something that — you know — you’re playing soccer, and you feel that there’s a problem with a muscle. It’s yours.”

Cortese likens selecting a violin repair expert to selecting a dentist. “The dentist is something that you really choose,” he says. “The barber is somebody you choose.” According to Cortese, musicians don’t give their instruments to a repair person who isn’t “highly recommended.”

Given her choice of metaphor, it’s apt that some of the devices Carbury-Breau uses to repair violins are re-purposed dental tools that she’s picked up at flea markets. “You need something a little pointed or a little mirror to look in,” she says. “You see that, and you go, ‘Oh, I could use that to look inside a violin,’ or ‘I could use this to do a little something.’” Violin anatomy is as delicate as dentistry.

After decades of violin repair, Carbury-Breau is full of stories. “There’s a thousand things we could talk about,” she says, cradling a mug of water. She remembers the days in the 1960s when she saw Bob Dylan on Mt. Auburn Street; the violins from China and England and France and Australia sent to her for repair; the doctor from Cleveland who played Ave Maria on his Stradivarius violin one night in her shop. She recounts a period when she was having a tough time and bought a CD of La Mer by Debussy to fall asleep to and listened to it for weeks and weeks. It is a seemingly mundane moment that has stayed with her. Carbury-Breau struggles to describe her experience.

“You see, I don’t know which word to use: when you hear [the music] or when you listen. Which word would you use?” She pauses. “Once you get to a point where it’s speaking to you.” She takes a sip from the mug.

Business is slower now. The repetitive motions of twisting and gripping and slicing have taken their toll on Carbury-Breau’s hands. Her thumbs are often in pain, but she’s treating them, applying heat and soaking them often. She says they are getting better. Still, she has to tell customers it will take a little longer to fix their instruments. She isn’t playing the guitar or the violin for the time being.

Hanging over a door in Carbury-Breau’s shop is a gold placard that says “Symparanekromenoi.” It’s from Kierkegaard, she says, her “favorite existentialist.” She translates the phrase as “Separation from God.” It literally refers to a fellowship of the dead; yet, descending the 16-step staircase back to the street below Cambridge Violin, “separation” feels like the right word to meditate on.