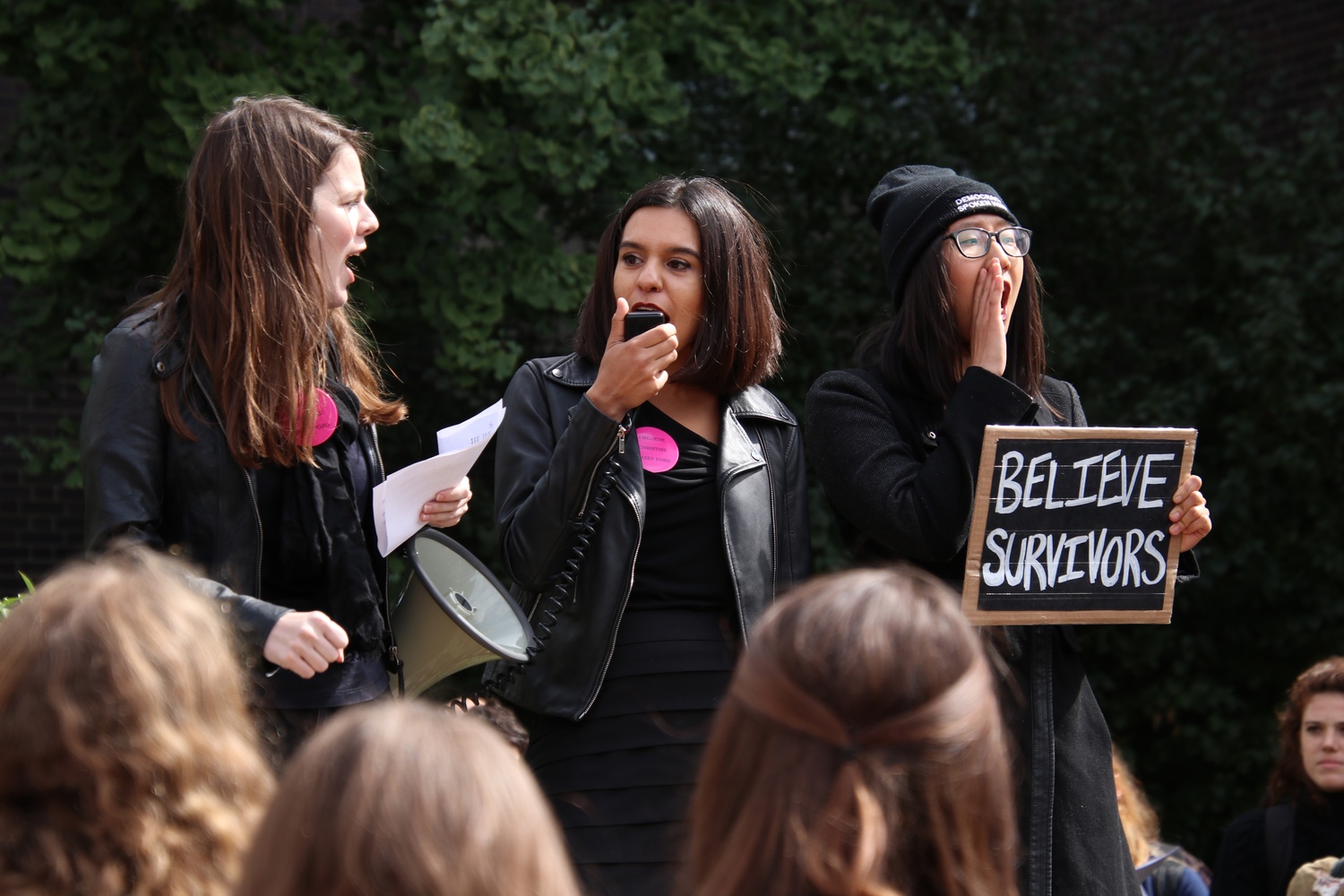 At almost exactly 12:57 p.m. Monday, several hundred Harvard undergraduates and Law School students rose from their desks, packed up their bags, and walked out of their classrooms.

They strode across campus to a small plaza sparsely dotted with trees, shouting calls for “Justice!” into the crisp afternoon air. A handful clambered atop a granite rock reading “Harvard Law School” and lofted bullhorns. Almost all wore black. Many pinned small pink buttons declaring “I Believe Christine Blasey Ford” to their chests.

“America is at a crossroads,” third-year Law School student and president of the Harvard Black Law Students Association Lauren D. Williams told the crowd. “It can turn a wilfully ignorant blind eye, as it has done countless times before, or it can stand by these survivors and ensure that there is a fair investigation and a fair judiciary hearing.” 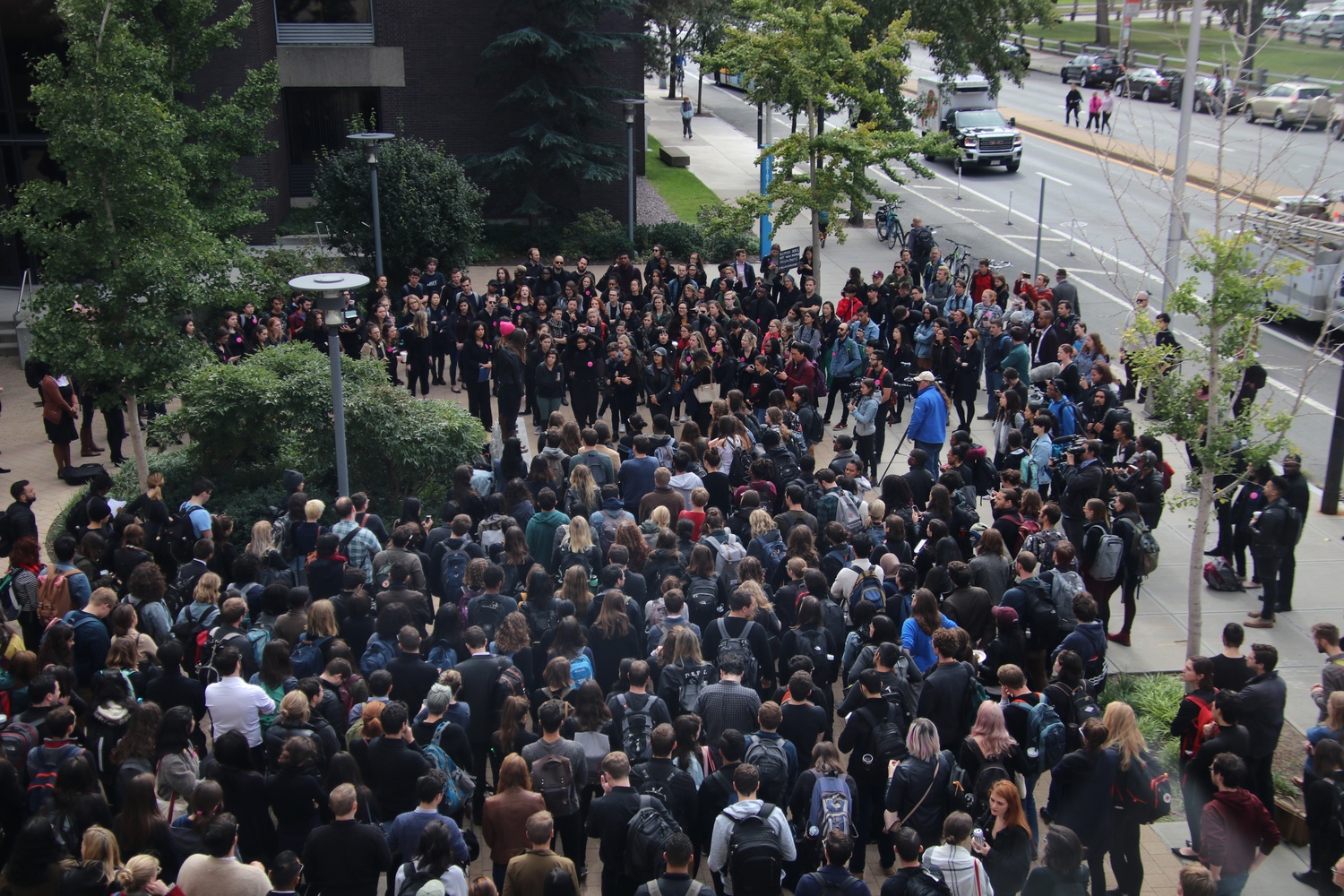 A large crowd gathers around speakers at the walkout for Christine Ford and Deborah Ramirez. By Amy Y. Li

Williams was referring to the accusations of sexual misconduct that have roiled the once seemingly surefire Supreme Court confirmation of President Donald Trump nominee and conservative judge Brett M. Kavanaugh. Over the course of the past week, at least two women have come forward with allegations that Kavanaugh sexually assaulted them decades ago.

In an interview with the Washington Post, Ford — a widely published psychology professor from California — said that Kavanaugh pinned her to a bed, ground his body against hers, and sought to remove her clothes at a party both attended while in high school. And in a later interview with the New Yorker, a second woman, Deborah Ramirez, alleged that Kavanaugh had pushed his penis in her face at a party when both were enrolled as undergraduates at Yale.

Both Ford and Kavanaugh are set to testify about his alleged misbehavior at a high-stakes, nationally televised hearing Thursday. Kavanaugh has repeatedly and unequivocally denied the women’s allegations — and did so again in an interview with Fox News on Monday.

But his declarations of innocence have not convinced some at Harvard Law School. Monday’s walkout and rally — which lasted for roughly 20 minutes in total — follows a Harvard Law Record article published last week in which four students called on the University to bar Kavanaugh from teaching at the Law School pending a “full and fair investigation” into the allegations of sexual misbehavior.

Kavanaugh currently serves as a lecturer at the Law School, where he has taught since 2008. He is scheduled to teach a course titled “The Supreme Court Since 2005” during the 2019 winter term, a special three-week session that takes place each January. 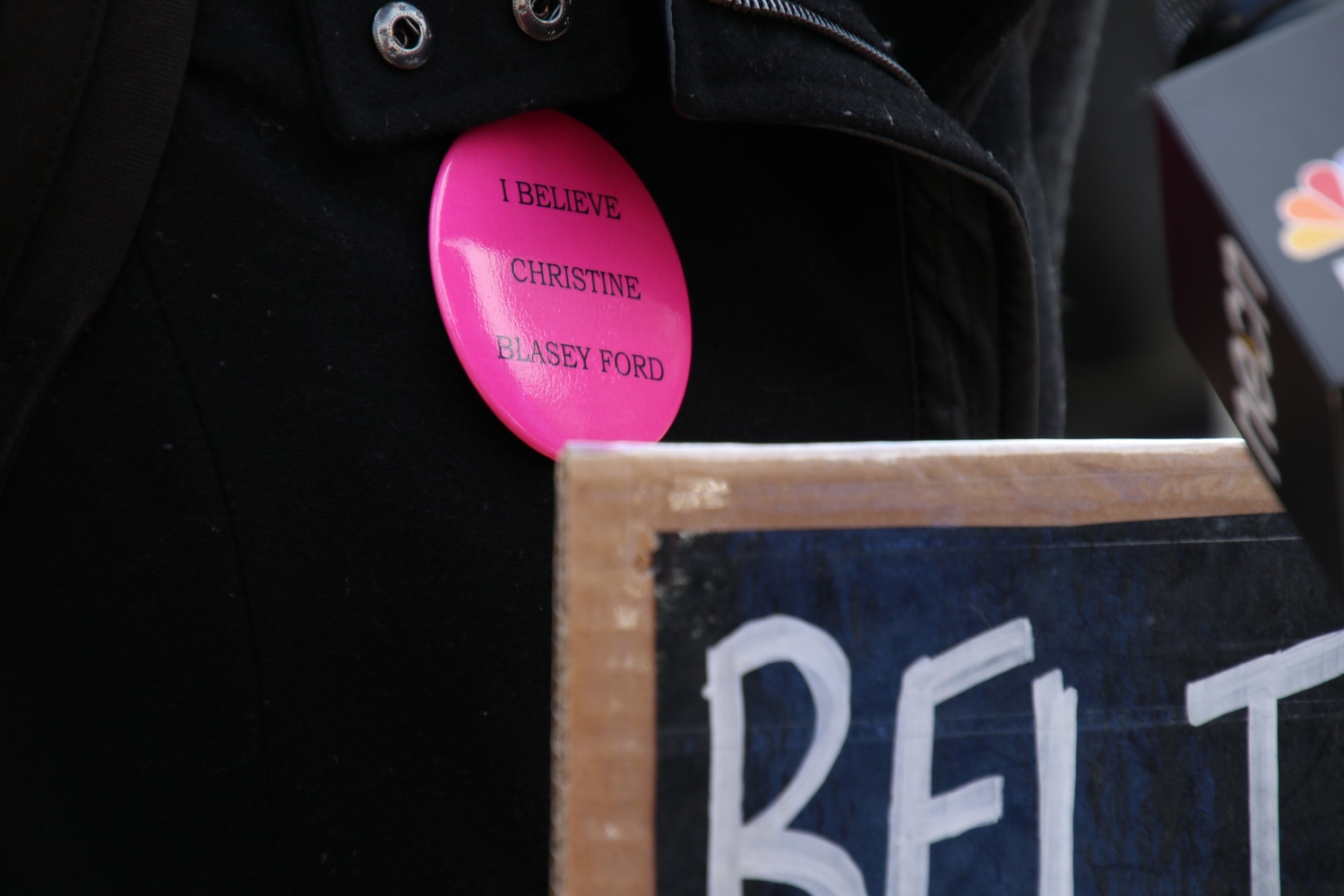 At a walkout Monday, HLS students wore buttons in support of Christine Blasey Ford, a professor alleging Supreme Court nominee Brett M. Kavanaugh sexually assaulted her when they were both teenagers. By Amy Y. Li

Second-year Law School student Sejal Singh, who helped organize the walkout on behalf of anti-harassment student advocacy group the Pipeline Parity Project, said in an interview after the event that Kavanaugh’s confirmation would have a far-reaching impact on American teenagers.

“We should think about not just the message that his presence on the Supreme Court would send to the American people, not just to women, but to boys, who see that there’s no consequences for this kind of behavior,” she said.

Though the crowd was mostly composed of Law School students, the walkout also drew participants from the College — and a few passersby. Amelia Y. Goldberg ’19, a member of anti-sexual assault advocacy group Our Harvard Can Do Better, said she tried to get the word out to Harvard undergraduates over the weekend and on Monday. The group posted about the event on social media and sent details over Harvard email lists.

Alexandra “Vail” Kohnert-Yount, a second-year Law student who helped plan the walkout, said the demonstration was meant as more than simple protest.

“This walkout symbolizes the lack of an investigation into these allegations, it symbolizes the Harvard administration’s deafening silence on this matter, and it expresses our deep concern as human beings and as Americans for the harms that Judge Kavanaugh would do to us,” she said.

Shortly after Kavanaugh’s nomination in July, Law School Dean John F. Manning ’82 praised and congratulated the judge in a statement posted on a Harvard website. Manning called Kavanaugh “an inspiring teacher and mentor” who has demonstrated “generosity, dedication, and collegiality” during his time teaching in Cambridge.

Manning has not commented publicly on Kavanaugh since the first allegations of sexual misconduct surfaced over a week ago.

“It is Law School policy not to comment on personnel matters," Law School spokesperson Robb London wrote in a statement.

Asked about the walkout, Law School Dean of Students Marcia L. Sells wrote in a statement Monday night that the school recognizes its students are working to process the recent spate of news reports surrounding Kavanaugh.

“We are supporting our students as they grapple with these issues in different ways,” Sells said. “On Thursday, when the hearings are aired, we will provide a space for students to watch together as a community.”