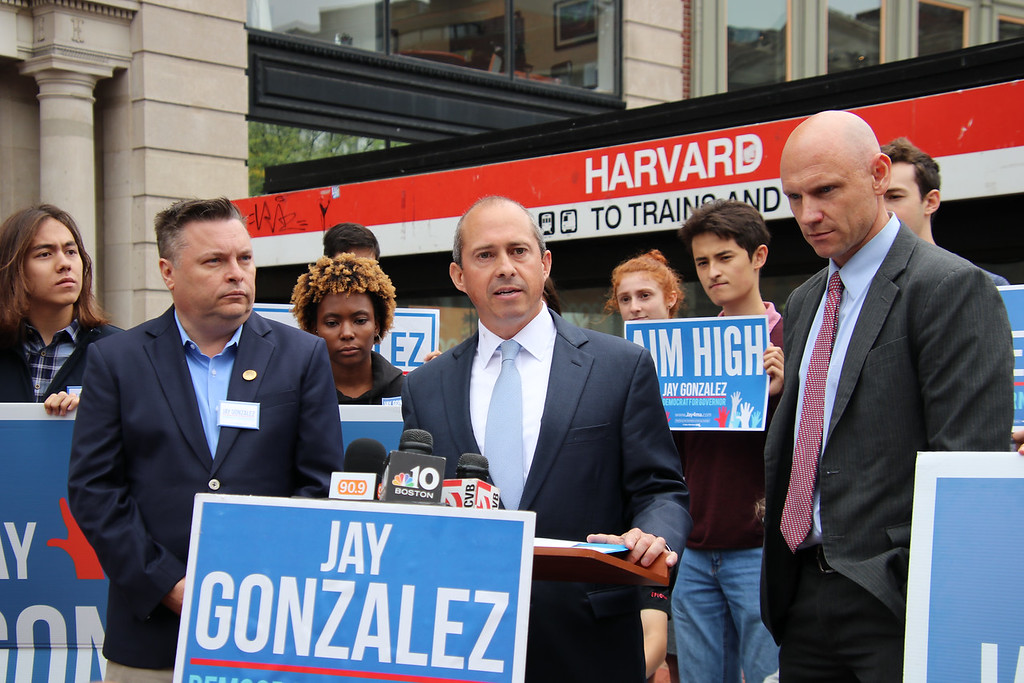 Gubernatorial Candidate Jay Gonzalez held a press conference at the Harvard T Stop to propose an endowment tax that would cost Harvard half a billion a year. By Amy Y. Li
By Lorenzo F. Manuali
Lorenzo F. Manuali ’21, an Associate Editorial Editor, lives in Adams House.

It was wrong when the Republican Congress called for it and President Donald Trump signed it into law. It’s wrong now.

Recently, Democratic nominee for Massachusetts governor Jay Gonzalez, with Democratic nominee for lieutenant governor Quentin A. Palfrey ’96 and Cambridge Mayor Marc C. McGovern beside him, announced a plan to tax the endowments of the state’s private, non-profit colleges and universities whose endowments total over $1 billion at a 1.6 percent rate. This plan is more severe than the one passed by Republicans in Congress and signed into law by Trump. That plan taxed the income generated by university endowments, meaning that, according to one estimate, Harvard will have to pay the federal government over $40 million. Gonzalez’s plan, on the other hand, taxes the assets of the endowments, resulting in the $500 million figure that Harvard would owe the state of Massachusetts under his plan.

Simply put, this plan is foolish. All of the institutions of higher education that would be taxed under this plan — including Harvard — are non-profit organizations. In case Gonzalez has forgotten what that means, these institutions don’t make money off of the services they provide the public or the people they educate. At the same time, they provide an enormous benefit to society. Higher education has been shown to increase social mobility, civic engagement, tax revenues, economic growth, innovation, and has many more positive effects.

Supporters of the plan delineate the difference between this plan and the one passed by Republicans in Washington by pointing to Gonzalez’s intention to use the income generated by the tax to fund public education and transportation. Besides the fact that Gonzalez avowedly does not yet know how the money “would be allocated,” raiding one form of non-profit education to provide for another is hypocritical at best. There is no doubt that public education deserves more money than it is currently receiving, but the money should come from elsewhere.

In the same vein, raiding one public benefit (like higher education) to give to another (like transportation) is often a very bad idea. Of course, governments must sometimes fund initiatives with less-than-ideal revenue sources. Budget constraints are real. But stealing large sums of money (such as $500 million) from a public good can lead to unintended consequences down the road. As an example, for years, New York governors used money that was originally meant for the Metropolitan Transportation Authority for other projects. Now, the New York City subway system is in shambles.

Still others argue that endowment taxes encourage universities to use their endowments to lower tuition prices and increase financial aid for their students. Many of the universities affected by this tax, however, already have need-blind admissions processes, meaning your socioeconomic status plays no role in the decision of whether to admit you. However, even if this weren’t true, it’s difficult to lower the price of tuition or provide more financial aid when the state of Massachusetts is stealing away significant amounts of money from your budget. The way to incentivize universities to lower their prices certainly isn’t to tax them. Indeed, it may trigger the opposite of what was intended.

Moreover (and perhaps worst of all), Gonzalez’s plan dangerously plays into the populist attack on higher education, and it reaffirms the idea that higher education is an elitist institution that is bad for the nation, rather than an instigator of social mobility and societal progress.

So, Mr. Gonzalez, tell me this:

Neither you nor I can answer these questions precisely — we don’t know how Harvard will deal with the lost revenue, just like you have no real plan for how to spend it. But what we both know is that the $500 million in cuts have to come from somewhere. The University’s surplus on its $5 billion operating budget only amounted to $114 million in the 2017 fiscal year. Taking into account the $40 million that will be lost to the federal endowment tax, that leaves an almost $400 million hole in the University’s budget. This isn’t just another endowment tax. This is a tax on financial aid. This is a tax on education. This is a tax on research. But perhaps most disgustingly, this is a tax on human lives and progress.

Because, with Gonzalez’s proposal, we’re already at the bottom.