‘We Deserve Better’: Harvard Students Take In Kavanaugh-Ford Hearing, Protest the Law School and the Nominee

Students sitting in Harvard Law classrooms “applauded” and “burst out in cheers” when Supreme Court nominee Brett Kavanaugh lamented the fact that he might never return to teach at the school during an extraordinary Senate hearing Thursday. 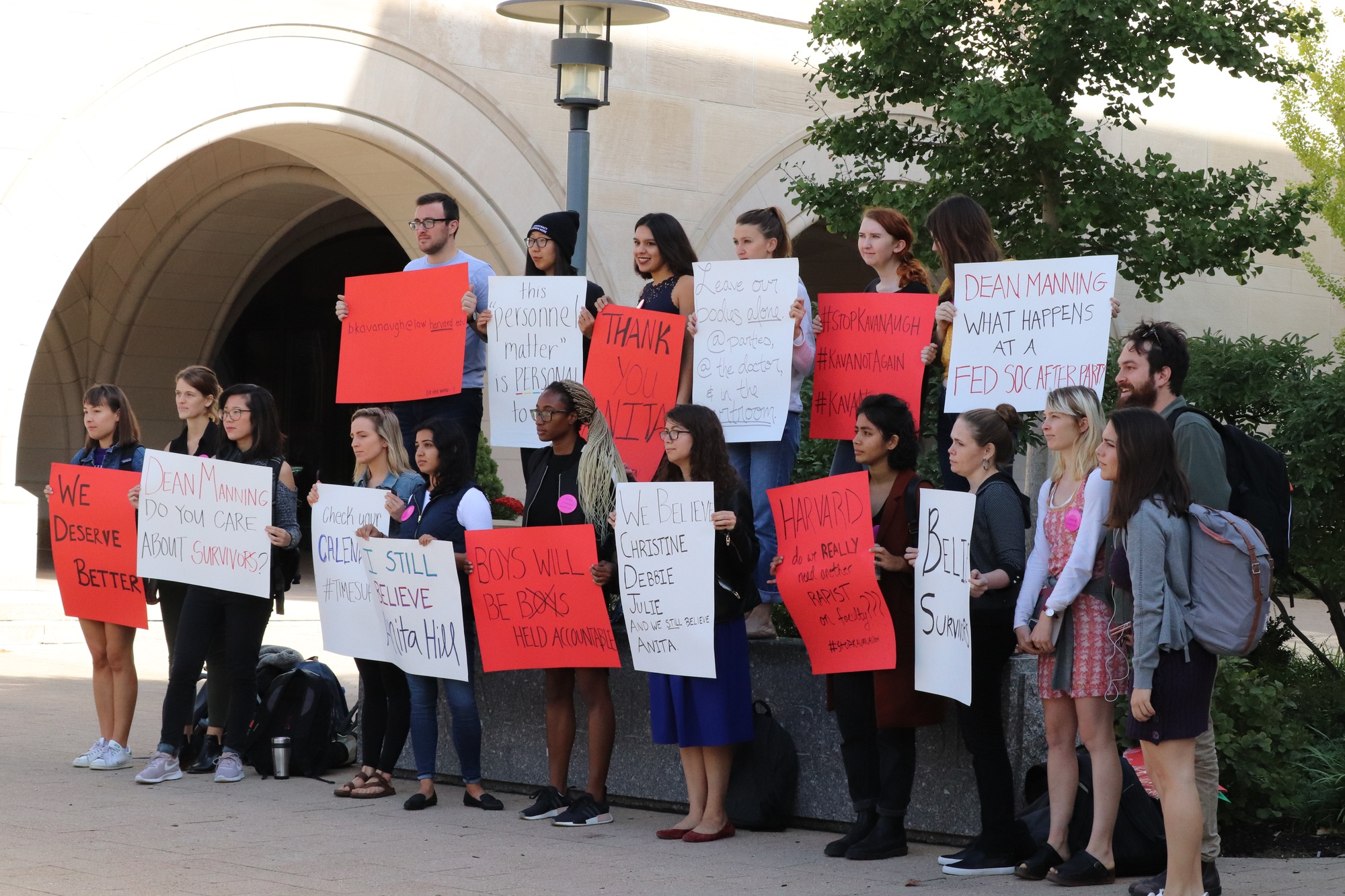 ‘We Deserve Better’: Harvard Students Take In Kavanaugh-Ford Hearing, Protest the Law School and the Nominee

Students sitting in Harvard Law classrooms “applauded” and “burst out in cheers” when Supreme Court nominee Brett Kavanaugh lamented the fact that he might never return to teach at the school during an extraordinary Senate hearing Thursday.
By Jamie D. Halper and Aidan F. Ryan

Students on campus joined millions of others across the country riveted by what many have described as the most contentious Supreme Court confirmation process in decades. For Harvard Law students in particular, though, the day-long proceedings held hundreds of miles away in Washington, D.C. hit close to home.

Kavanaugh has taught at the school for over a decade as a visiting lecturer. Students watched, some with bated breath, as Ford described how Kavanaugh had allegedly attacked her when the two attended a party as teenagers in suburban Maryland.

"I was pushed onto the bed and Brett got on top of me. He began running his hands over my body and grinding his hips into me," Ford recounted, growing visibly emotional. "I believed he was going to rape me. I tried to yell for help. When I did, Brett put his hand over my mouth to stop me from screaming."

In his testimony, Kavanaugh strongly — and angrily — denied Ford's allegations.

"This has destroyed my family and my good name," Kavanaugh said. "This whole two-week effort has been a calculated and orchestrated political hit, fueled with apparent pent-up anger about President Trump and the 2016 election."

The intense and highly scrutinized hearing stretched on for more than eight hours, as senators and a prosecutor hired by Republicans questioned first Ford and then the nominee. Senators pressed Ford about details of the alleged encounter, Kavanaugh about his teenage drinking habits, and each other about their possible partisan motivations.

Kavanaugh, President Donald Trump’s nominee to replace retiring Supreme Court Justice Anthony Kennedy, seemed all but certain to be confirmed to the Court until about two weeks ago, when an anonymous letter accusing the nominee of sexual assault leaked to the press.

Ford came forward as the author of the letter a few days after it leaked, alleging in an interview with the Washington Post that Kavanaugh had pushed her onto a bed, pressed his body to hers, and attempted to take off her clothes at a house party in 1982.

Days afterward, another woman — Deborah Ramirez — told the New Yorker that Kavanaugh had exposed himself and pushed his penis in her face at a party both attended while freshmen at Yale College.

Kavanaugh repeatedly and unequivocally denied the allegations and requested the chance to defend his reputation in front of the Senate Judiciary Committee. After several days of negotiations over the terms of such a hearing, Ford agreed to fly across the country to answer questions in person. 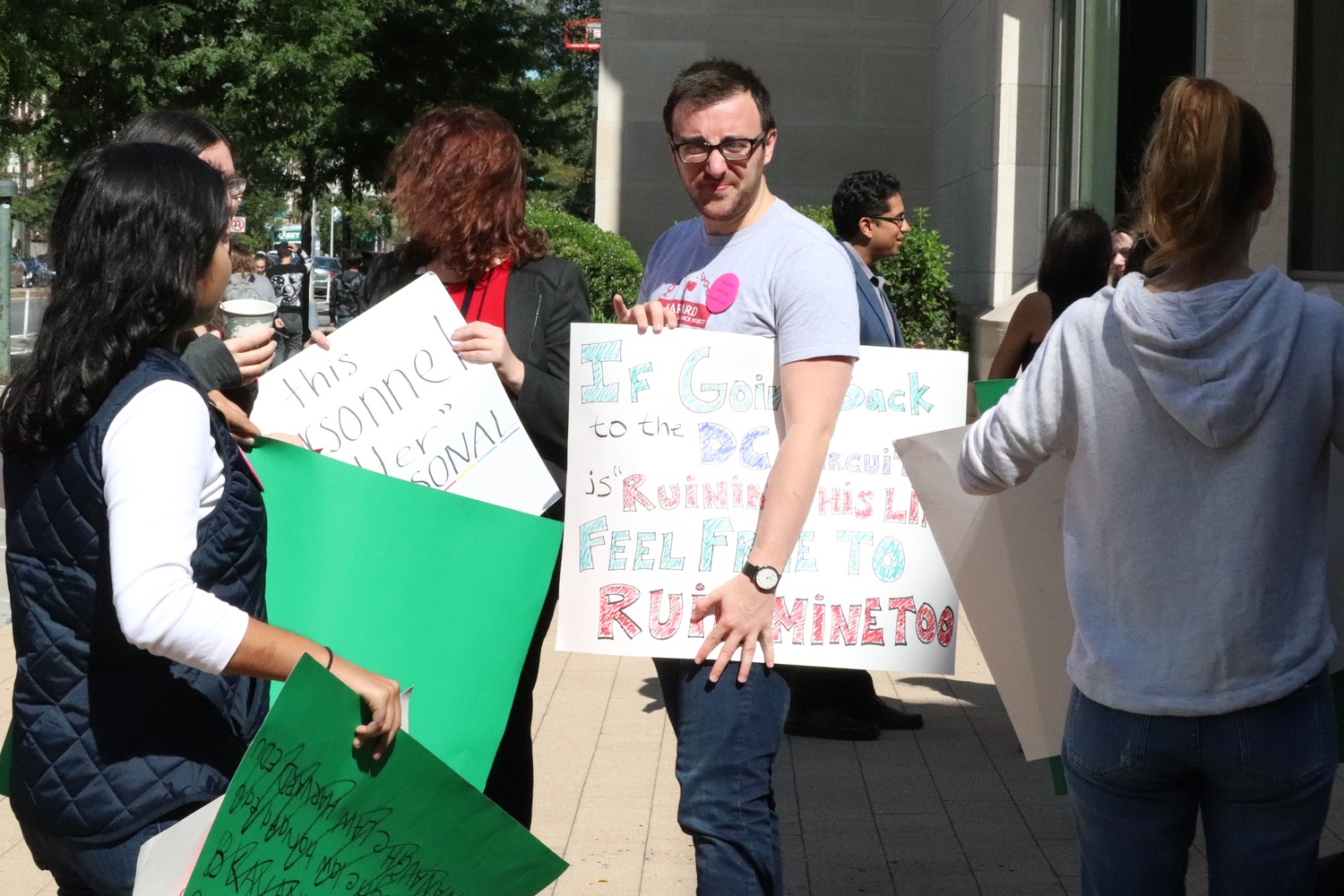 Seated before the committee Thursday morning, Ford said that, though she was “terrified” to go public with her allegations, she felt it was her “civic duty.” When senators asked her if she was completely sure Kavanaugh is the man who attacked her, she replied that she was “100 percent” certain.

In his testimony, Kavanaugh again vehemently denied the allegations. He became teary and agitated, launching a broadside against the Democratic members of the committee and dubbing the hearing “a circus."

The series of unfolding accusations across the past week sparked emotional reactions — and protests — in Cambridge, even spurring some students to urge Law School administrators to bar Kavanaugh from teaching at the school pending a "full and fair investigation" into all allegations of sexual misconduct. Law School administrators have three times refused to say whether they will permit Kavanaugh to teach his course on the Supreme Court this winter.

“It is our longstanding policy not to comment publicly on personnel matters,” Law School spokesperson Robb London wrote in a statement Tuesday.

Hundreds of Harvard Law students walked out of class Monday to show support for Ford and Ramirez and to protest Kavanaugh. At the College, the Harvard Democrats and anti-sexual assault advocacy group Our Harvard Can Do Better criticized the Law School’s silence on Kavanaugh at a meeting Tuesday evening. And on Wednesday, members of the Harvard International Socialists rallied around the John Harvard statue in the Yard to demand Harvard to sever ties with the embattled nominee.

The day of the hearing, the Harvard Law Student Alliance for Reproductive Justice held a screening in a classroom closed to the press. Haley R. Adams, a second-year Law School student who attended the screening, said in an interview during a break in the proceedings that she sympathizes with Ford.

“I don’t want to speak for all women but I think that most of us can probably see ourselves in that experience,” Adams said. “Maybe not in quite as formal as a setting, but in a situation in which we are trying our best to convey an experience and being doubted and questioned, and it’s really horrifying to watch and it’s exhausting.” 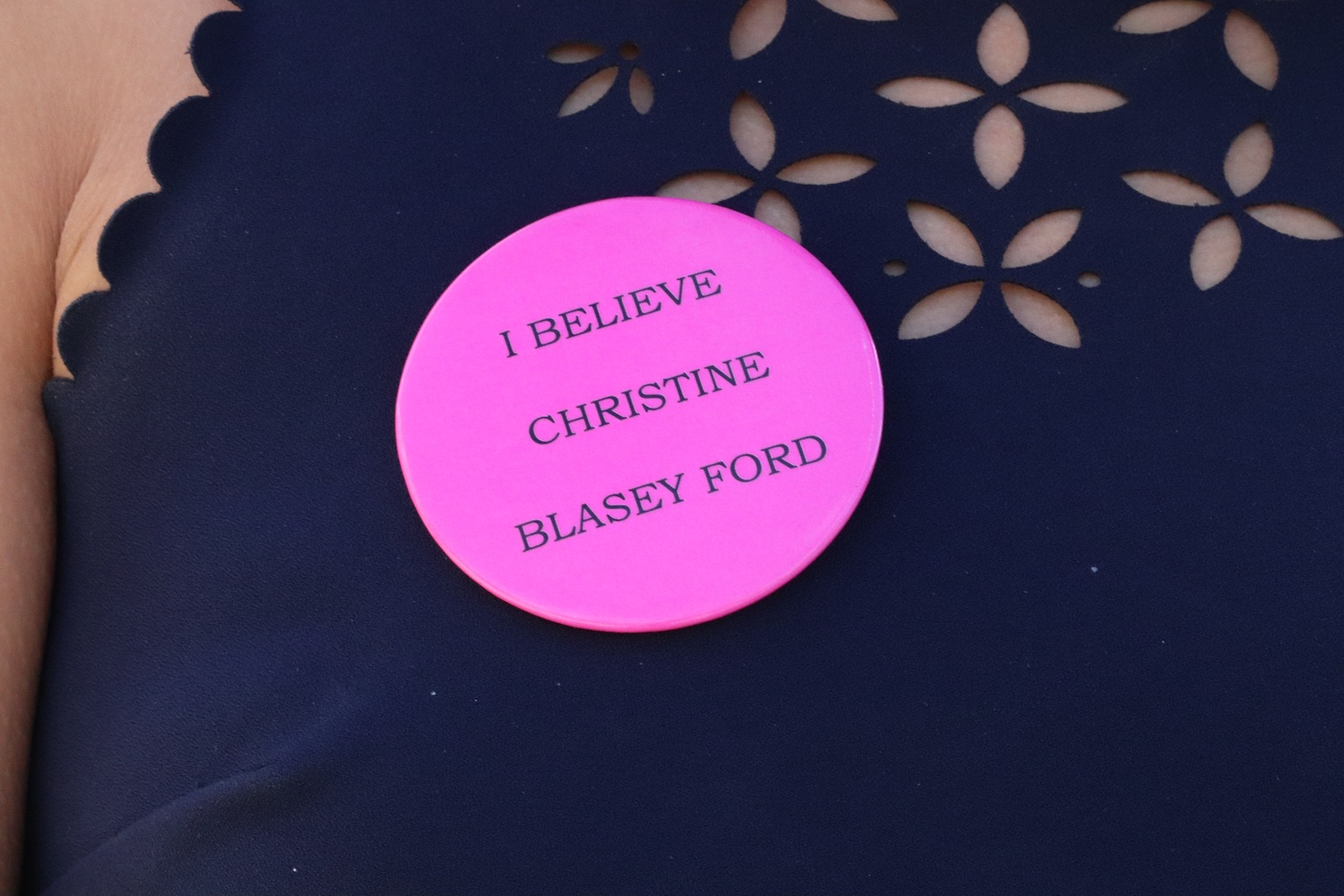 The Law School Dean of Students Office also held a separate screening in a school pub.

Shortly after 11:30 a.m., a group of Law School students launched an anti-Kavanaugh demonstration outside of Pound Hall — the same location where students held the walkout and rally Monday. The protesters flaunted posters reading “We Deserve Better” and “I Still Believe Anita Hill.” Some signs offered more pointed criticism of Law School Dean John F. Manning ’82. One, referencing the dean's refusal to comment on Kavanaugh’s employment status, asserted that “This ‘personnel matter’ is PERSONAL to us.”

The group of roughly 20 to 25 students stood outside and posed for pictures while holding posters during a break in senators’ questioning of Ford.

Though students at the Law School have loudly voiced their outrage over Kavanaugh, Harvard Law professors have made no organized effort to oppose his nomination. Their silence stands in contrast to action taken by law school faculty at Yale, Kavanaugh’s alma mater, several of whom penned a letter to the Senate Judiciary Committee urging the senators to “conduct a fair and deliberate confirmation process” that includes an investigation led by a “neutral factfinder.” Sen. Richard Durbin (D-IL) formally submitted the letter for the record during the hearing Thursday.

Second-year Law student Sejal Singh — one of the four authors of a Harvard Law Record article that called on the University to ban Kavanaugh from teaching — said she was disappointed that Harvard professors have not sent a similar letter to the Senate.

“My understanding is that the letter from Yale Law professors calling for a real, full, fair investigation was entered into the record today,” Singh said. “And I really wish there had been a similar letter from our professors here at HLS.”

Kavanaugh’s time teaching at Harvard not only stirred controversy in Cambridge, it also featured in the nominee's opening testimony.

Before the allegations emerged, 80 of Kavanaugh’s former students had sent a letter to the Senate Judiciary Committee extolling the judge’s character and teaching abilities. Later, more than 200 current and former students signed and sent a rebuttal letter opposing his nomination.

“In a letter to this committee, my former students — male and female alike — wrote that I displayed ‘a character that impressed us all,’” Kavanaugh said Thursday. “I loved teaching law. But thanks to what some of you on this side of the committee have unleashed, I may never be able to teach again.”

According to several Law School enrollees, students sitting in Harvard Law classrooms Thursday “applauded” and “burst out in cheers” when Kavanaugh said he might never return to a teaching role.

Back at Harvard, students also gathered at screenings held at the Institute of Politics Thursday, though attendance petered out over the course of the afternoon. Alexandra S. Norris ’21, who attended the IOP viewing event, said she wanted to experience the hearing alongside other students who cared about the confirmation process.

In the conference room where the hearing was shown, specific moments drew a range of responses from those who had gathered to watch.

When Ford mentioned the GoFundMe campaigns her supporters have set up to help cover security costs and Rachel Mitchell — the prosecutor Republicans brought in to question Ford — appeared confused about the online fundraising site, laughter broke out in Cambridge.

The proceedings more frequently drew sober reactions, though. When Ford said she had taken a polygraph test to determine the veracity of her allegations on the day of her grandmother’s funeral, the audience gave groans of disbelief.

Upstairs from the IOP conference rooms where undergraduates gathered to watch, a group of Harvard Kennedy School students took in the hearing in a student lounge. At the viewing — hosted by the school’s Gender Policy Union and Women in Power organization — Sarah Kinney, a mid-career MPA candidate, said cheers erupted when Sen. Kamala Harris (D-CA) spoke up in support of Ford.

Watching the proceedings with other students provided a source of support on an emotionally fraught day, Kinney said.

“I think that there’s a lot of power in having people around you to do difficult things,” she said. “I didn’t really want to watch it, I wasn’t interested in watching it by myself and I just did not want to experience that without a support community.”

The Senate Judiciary Committee will vote Friday morning on whether to advance Kavanaugh’s nomination to the full Senate.