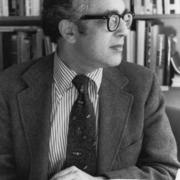 Nathan Glazer, Harvard's Professor of Education and Social Structure, Emeritus, died Saturday at the age of 95 in his home in Cambridge.
By Rebecca S. Araten, Crimson Staff Writer

When filmmaker Joseph Dorman interviewed Sociology Professor Emeritus Nathan Glazer at City College on 137th street in Harlem, he offered to hail a cab or order a car service to take the professor, then in his 90s, to wherever he wanted to go next.

“He said, ‘Absolutely not, I want to take the subway home,’” said Dorman, who wrote and directed the film “Arguing the World,” which featured Glazer and three of his fellow New York intellectuals. “That was a point when they were just beginning to produce subway art in each of the subway stations, and he wanted basically to stop at all the stations on the way home to look at the subway art.”

Glazer, who died Saturday at the age of 95 in his home in Cambridge, studied issues of ethnicity and immigration, often examining them from a global perspective. He is known for being one of the first sociologists to focus on ethnic studies, according to Dorman. But Glazer also explored topics stretching beyond sociology, venturing into varied fields like education, architecture, and urban planning. His work often touched on city life.

Glazer’s free-thinking attitude allowed him to connect his studies to a variety of different fields, according to Sociology Department Chair Jason Beckfield.

“He couldn’t be bound by a certain school or a certain discipline,” Beckfield said.

Nathan Glazer, Harvard's Professor of Education and Social Structure, Emeritus, died Saturday at the age of 95 in his home in Cambridge. By Courtesy of Harvard Department of Sociology

Glazer started his career in academia, teaching at University of California, Berkeley in 1963 before moving to Harvard in 1969, where he taught in the Sociology department. During his time at Harvard, his courses spanned three schools: the Faculty of Arts and Sciences, the Graduate School of Education, and the Graduate School of Design.

Tufts History Professor Reed T. Ueda, who was one of Glazer’s students at the Graduate School of Arts and Sciences, called him a “true thinker” and an “independent spirit.”

Glazer wrote several books including “Beyond the Melting Pot,” which explored the plausibility of assimilation as a goal for immigrants. He came to the conclusion that total assimilation of minority groups was impossible and that America would never be a country of “unhyphenated Americans,” but rather would comprise multiple identities.

The city often inspired Glazer’s work, according to multiple people who knew him.

Dorman said Glazer’s research showed attention and care to the specifics of city life and its realities.

“He really observed on the ground, he was not a man of grand theories,” Dorman said. “He really in a lot of ways disdained grand theories, because he saw all the ways that large, abstract theories obscured one’s ability to understand particularities of life...all those particulars added up themselves to something larger than any overarching theory could get at.”

Glazer’s appreciation of the “quirks of the city” caused him to disagree with modernism’s bleak views of city life, according to Dorman.

“He really, in that sense, had a wonderful eye and a love for what makes a city a city,” Dorman said.

Glazer grew up in New York City, living in East Harlem and the East Bronx as the child of Jewish immigrants from Warsaw. Though he left the city after his marriage to writer Ruth Gay ended in a divorce, Glazer remained “absolutely fascinated by New York City,” according to his daughter Sophie B. Glazer ’74.

“Long after he left New York he would come back very specifically, to make sure we saw some particular architectural wonder that he delighted in,” Sophie Glazer said.

To celebrate Glazer’s 80th birthday, the two went on an architectural walk around what used to be the Jewish neighborhoods of Harlem, looking at the changes that had taken place since Jewish families had left there to move to the Bronx.

Early in his career, Glazer became involved in radical politics and joined a group called the New York Intellectuals while he was in his 20s. He later built up a reputation as a neo-conservative, a label which Dorman said was applied “erroneously.”

“He was always a kind of independently ascending neo-conservative. He never stopped being one, but he was never a pure one in any way,” said Eugene J. Dionne ’73, Glazer's undergraduate thesis advisee.

Dionne said that while Glazer took a neo-conservative approach to academic policy research, he cared a lot about economic injustice and was anti-war.

Glazer was not afraid to change his stance on political subjects, according to Boston College Political Science Professor Peter N. Skerry, who worked with Glazer as a Ph.D. student.

“Nat Glazer was always a man who was constantly re-evaluating his views, particularly his political and policy views,” Skerry said.

Dorman said one example of Glazer recanting a previous position is when he changed his stance towards affirmative action. Glazer initially stood strongly against affirmative action, even writing a book about the topic, “Affirmative Discrimination,” in 1987. Eleven years later, Glazer published “In Defense of Preference,” an article that argued the country had not yet reached a point at which affirmative action was unnecessary and could be dismantled.

Glazer retired in 1993, but he continued his research and shifted his focus to architecture. Even as he neared the end of his days, when his vision made it difficult for him to read print books, Glazer continued to read history books off of a computer screen.

“He always said he felt lucky to do what he did,” Dionne said.