Bringing the Entire World to a Classroom With Rus Gant

As one of the leading experts on virtual reality technology, Gant has spent decades developing ways to bring the whole world into the classroom. He joined Harvard’s Visualization Laboratory in 2010, following stints at MIT and Carnegie Mellon University.
By Joshua S. Archibald and Matteo N. Wong 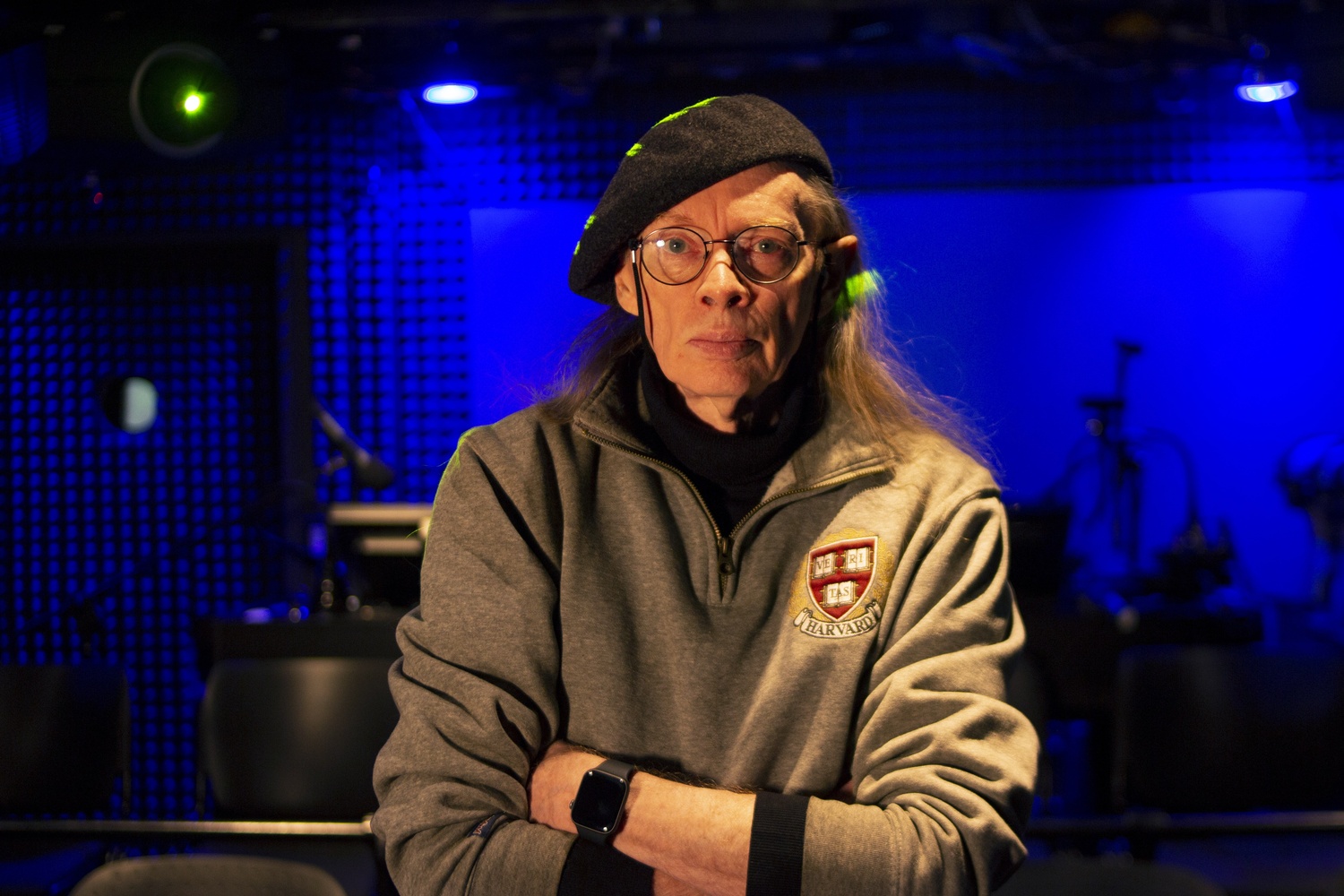 Rus Gant, a renowned 3D artist and computer engineer, is the director of the Harvard Visualization Research and Teaching Lab. By Awnit Singh Marta

From his lab in Harvard’s Geological Museum, Rus Gant can send people to Mars, Paris, the Pyramids of Giza, the bottom of the ocean, or on a flying tour of Manhattan with the press of a few buttons.

As one of the leading experts on virtual reality technology, Gant has spent decades developing ways to bring the whole world into the classroom. He joined Harvard’s Visualization Laboratory in 2010, following stints at the MIT and Carnegie Mellon.

“He’s one of the real pioneers in the entire field,” said Christopher J. Dede, a professor at the Harvard Graduate School of Education whose research focuses on the educational uses of virtual and augmented reality.

Gant’s recent projects include turning French language-learners into Parisians for a class period; taking college students on a virtual field trip to see the Sphinx and pyramids in Egypt; and giving geology students the power to build mountains in a sandbox.

Paul Kelley, the Department of Earth and Planetary Sciences laboratory director, has worked with Gant since he first brought his ideas to the department’s Visualization Lab.

“What really strikes me about Rus is not only the degree of passion that he brings to this and the strength of his belief in the role that it has to do with education, but his sustained ability to stay current in what the developments are,” Kelley said.

IMMERSIVE LEARNING AS A "SUPERPOWER"

“Today we’re talking about Mongolia. Boom! We’re in Mongolia,” Gant said, standing in his lab. “It’s like a superpower.”

Gant said he believes one of the most promising uses of virtual reality is immersion — embedding people in another environment through an entirely digital world.

He has worked on many projects at Harvard to make this a reality.

Following the 2015 Charlie Hebdo terror attacks in Paris, Gant collaborated with French Professor Nicole Mills to bring her students to memorial services in France via the Visualization Lab.

“A student was experiencing a memorial where people were singing and clapping, and the student actually started to clap while in the headset as if she was there,” Mills said. “There’s a really powerful experience of visiting that moment in time.” 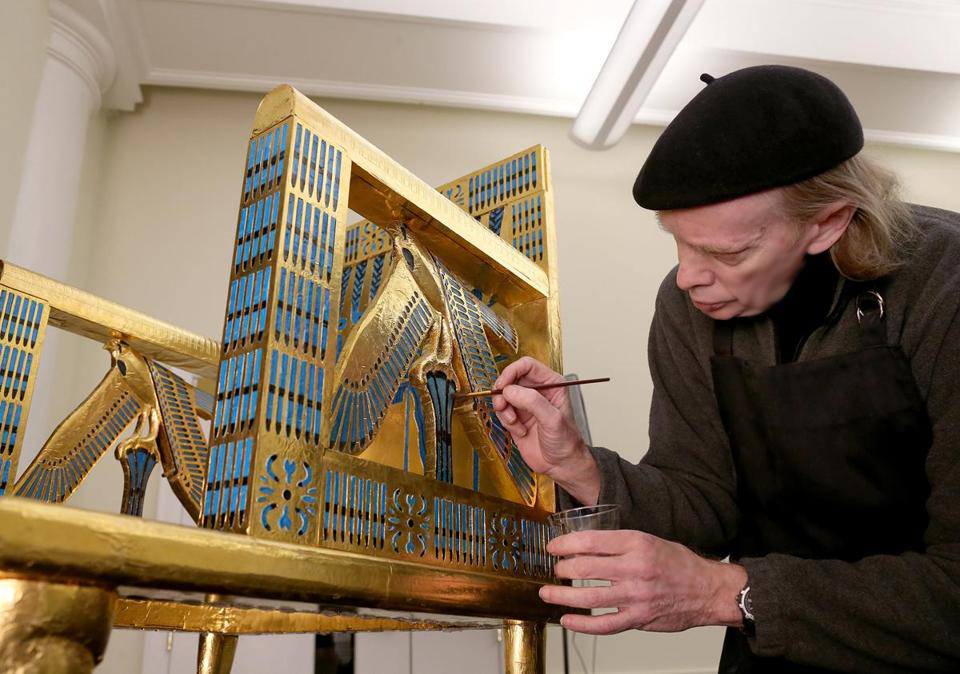 Gant works on Hetepheres's throne. By Courtesy of Rus Gant

Gant and Mills have continued exploring applications of virtual reality in language instruction. Over spring break 2017, he gave her a virtual reality camera to capture footage while taking a trip to Paris. Gant, who has a B.F.A. and M.F.A in 3D Cinematography and Animation and 3D Photography, then edited the footage into a series of vignettes, which Mills’ students used to experience different quarters of Paris through virtual reality headsets mounted to smartphones.

Inspired by the two earlier successes, Mills, with the help of Gant and Dede, applied for and received a grant in 2017 for a Paris virtual reality narrative project. Mills worked with virtual reality company Wonda to film four Parisians living in the city over the course of two months and used the footage to produce virtual reality experiences.

Now students in one of Mills’s classes, French 11: “French II: Exploring Parisian Life and Identity,” spend three days with virtual reality headsets, each day dedicated to the life of a different Parisian — an 11-year-old boy, a Tunisian filmmaker, and an artist-magician. Mills said she believes virtually experiencing Paris through others’ eyes changed her students’ perception of what it means to be Parisian.

One of Gant’s earliest projects at Harvard was the Giza Project, led by Anthropology Professor Peter Der Manuelian ’81. The project, still in progress, seeks to create detailed digital models of the Giza Plateau, home to the Giza Pyramids, one of the seven wonders of the ancient world.

“I enjoy picking his brain for future technology developments, and linking new developments with applications to education and archaeology that have not been previously brought together,” Der Manuelian wrote in an email. 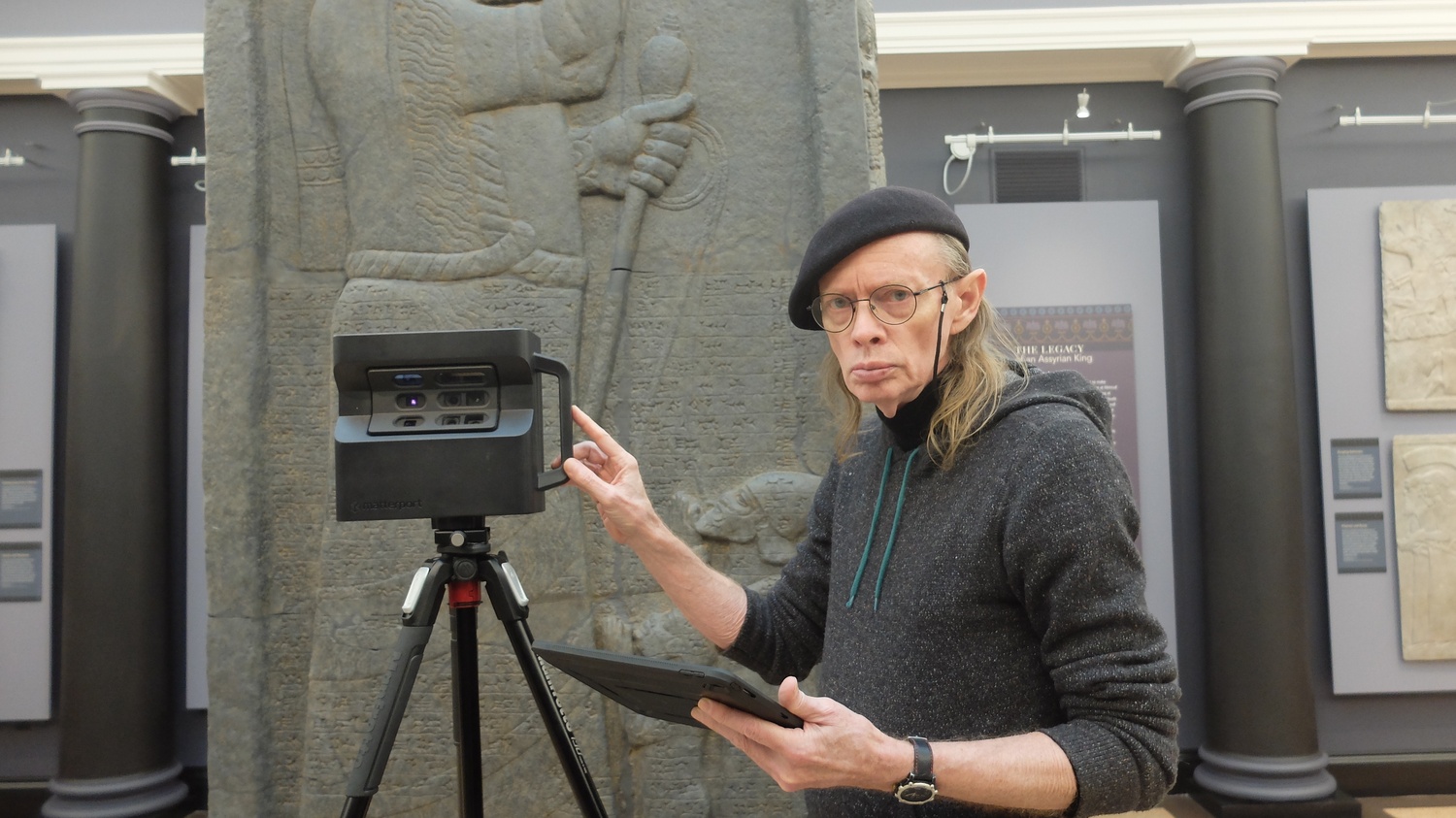 Gant photographs an exhibit at the Semitic Museum with a virtual reality camera. By Courtesy of Rus Gant

Gant recently pushed the boundaries of archaeological education by virtually bringing students from China’s Zhejiang University to the Giza Plateau along with one of Der Manuelian’s Egyptology classes.

Gant led students on an exploration of the tombs with the lab’s Rumii technology set-up, while Der Manuelian simultaneously lectured to classes thousands of miles apart.

“Literally at the same moment, at the same time, students on the other side of the world are engaged in exactly the same class material in this kind of virtual classroom,” Kelley, the lab director, said. “That’s unprecedented.”

ON THE CUTTING EDGE

Real-time collaboration in virtual reality, like in Der Manuelian’s class, was made possible by recent improvements in technology and decreasing costs. The Visualization Lab’s hardware has undergone several upgrades in recent years.

A screen in the lab can show multilayered images with such high resolution that humans standing miles away in photographs can be seen clearly when zoomed in.

“The room itself is a kind of instrument,” Gant said. “You can see any content in that instrument.”

For some classes, the lab may feature a trip to the Canadian Rocky Mountains with a 360-degree video of a field lecture to supplement.

For others, it can bring students through the lens of a microscope. In one biology class, students used to have to watch a professor examine a specimen through a window or small monitor because the microscope was too sensitive to have multiple people present.

With the Visualization Lab, students can observe the data collection in high definition.

The sandbox in Gant’s office represents another answer. Equipped with an Xbox camera, a projector, and a mid-range graphics computer, the box is a real-time topographical map generator. Incoming geology students can move the sand and a new map will project onto the surface. Holding out a flat hand creates digital rain, which pools at the lowest point of the projection.

VIRTUAL REALITY FOR ALL

“It’s relatively easy to tell the future. It’s hard to tell the timing of the future,” Gant said. “My role has been to be 10 years ahead of everybody else.”

His office is lined with decades of iterations of virtual reality hardware. Though virtual reality is not new, cost has long posed a significant barrier to its widespread use. In the 1980s, Gant said, a single headset cost upward of $10,000.

Only in the past ten years, with the release of gaming headsets like Hasbro MY3D and the mass production of smartphone parts, has the technology become affordable, he said. A formerly $7,000 accelerometer now costs 35 cents to manufacture, and Gant is even considering designing Harvard-specific headsets since parts’ costs aren’t astronomical.

This is not to say the most complex virtual reality will soon be accessible across the University, though. Scaling the technology requires making the Visualization Lab and headsets work consistently, an ongoing challenge.

“It’s one thing to do a one-off demo,” Gant said. “The technology needs to run on Harvard time.”

Another obstacle is the rapidly evolving nature of the virtual reality field: “If we buy it in the spring semester, will it be obsolete by fall?” Gant asked.

Regardless, Gant said he believes the increasing affordability of many virtual reality headsets can open up enormous possibilities for the classroom. He has done dozens of collaborations since coming to Harvard, ranging from Harvard Divinity School classes to the Business School.

Libraries, as well, have the potential to democratize virtual reality technology. Gant has worked with Susan Berstler, a technology specialist at the Cabot Science Library, to start making the technology accessible to all Harvard students.

The two have converted a group study room on the library’s second floor into a virtual reality space in which students can use a headset while a monitor mounted outside the room displays to onlookers what the current user is seeing.

“There’s no reason why we couldn’t check out VR headsets that have content on them related to a class the same way we check out books for research,” Berstler said.

“He is a resource for the greater Harvard campus,” Berstler added. “It’s sometimes very hard to work across departments and schools at Harvard, people get very siloed, and he doesn’t see any of those siloes.”