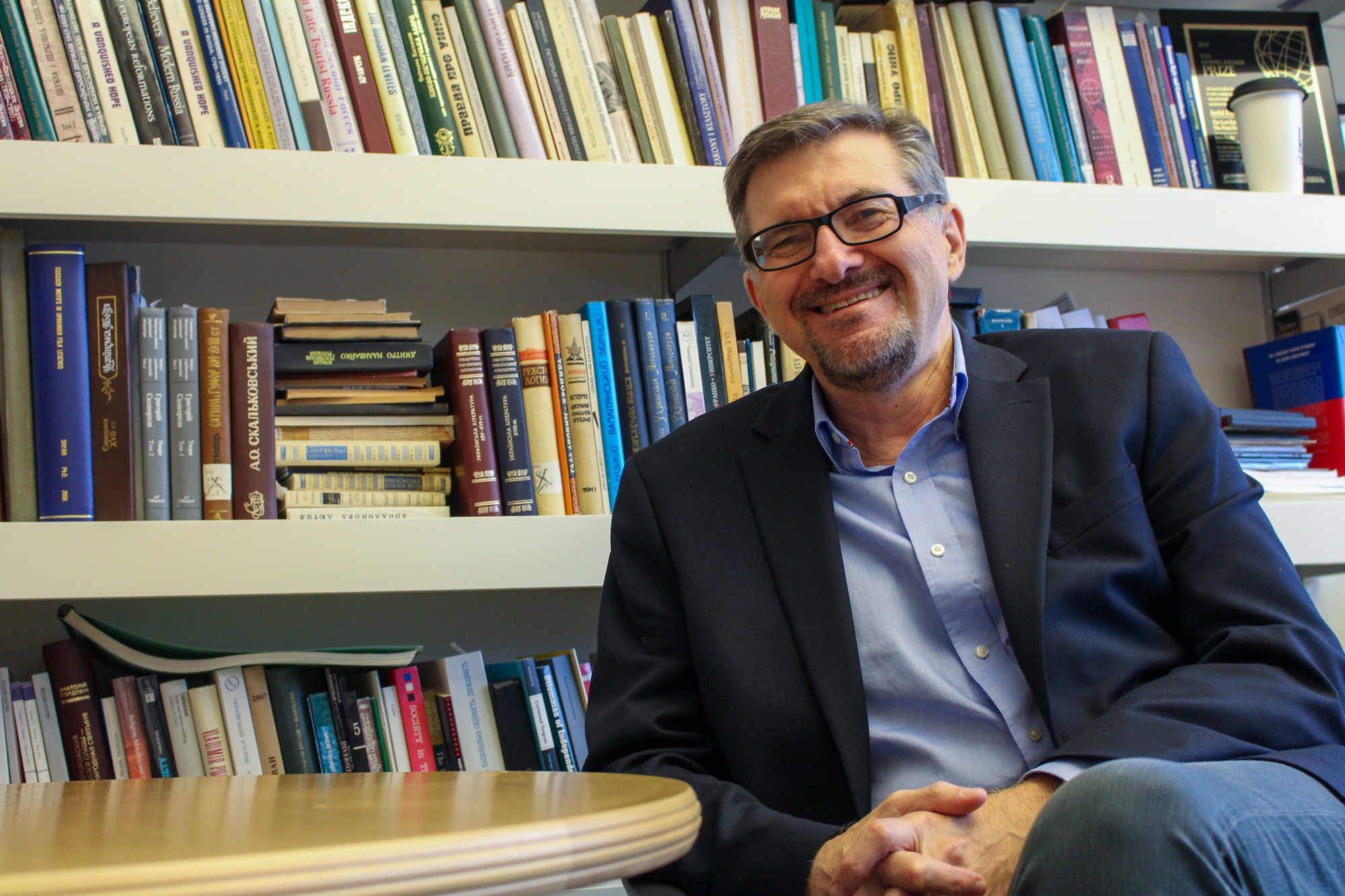 Serhii Plokhii is a Ukranian-American historian and professor at Harvard College specializing in the history of Ukraine, Eastern Europe, and Cold War studies.
Advertisement
Advertisement

Fifteen Minutes sat down with Professor Serhii Plokhii, the Mykhailo S. Hrushevs'kyi Professor of Ukrainian History, to discuss Ukranian history, the Trump-Ukraine scandal, and the roles that both Russia and the United States have played in shaping the country’s politics.
By Olga Kiyan

Professor Plokhii is the Mykhailo S. Hrushevs'kyi Professor of Ukrainian History. Fifteen Minutes sat down with him to discuss Ukranian history, the Trump-Ukraine scandal, and the roles that both Russia and the United States have played in shaping the country’s politics.

FM: Ukraine is situated so that it is caught between the interests of Russia and the West. Furthermore, in an interview with The New York Times, you referred to the country as a “battlefield.” Why do you think the location of Ukraine is important to its history and its relations going forward?

Now Russia is trying to reassert its role in the region, [and] Ukraine again becomes a key element. Just how the Soviet Union could not continue in ’91 without Ukraine, today a reassertion of Russia’s role in the region without Ukraine being on board is a major problem. That is why this is one of the only regions other than Georgia where you see military action happening, with the annexation of territory taking place.

FM: Especially with the Trump-Ukraine scandal, we were wondering if corruption plays a role in this situation. Why are U.S. politicians so interested in getting involved in Ukraine?

SP: Let’s look at the person who first brought Ukraine into [the United States] –– Paul Manafort. Manafort was participating in the elections and trying to help one of the candidates in the democratic elections in Ukraine.

If politicians go [to Ukraine]… they don't go alone. There are people who go there to make money, to advance some business initiatives, and so forth. And people take advantage of the interests and the support that already exists in Washington, and some of those people are more scrupulous and honest than others, to put it mildly. Judging by where Paul Manafort is now, he wasn’t very scrupulous. And from what we know about Hunter Biden, at least in the information that is publicly available, there was no wrong doing on his part. So, many people believe that the whole Biden thing is just a smoke screen, an attempt to distract attention from a number of scandals that are associated with the Trump presidency.

FM: There has already been talk about Russian meddling in U.S. elections, and now we see potential meddling in elections between Ukraine and the U.S. What are your thoughts on that?

SP: We certainly still are waiting for any, not even proof, but any suggestion that there was a government effort on the part of Ukraine to get involved in U.S. politics. There are no troll factories to do that, there were none of those operations. What we see is that different parts of American politicum try to use Ukraine to advance their agenda here in the U.S. It's not Ukraine coming to the U.S. and trying to influence that, it's America coming to Ukraine looking for dirt, either on one side of the political divide or another.

FM: How do you think these developments will affect U.S. politics?

SP: We see in this presidency something that didn't happen before –– a growing suspicion that the American president is in one way or another influenced by foreign powers. That wasn't in the first decades of the 19th century, when the U.S. was just being formed as a new state. It didn't happen in the 20th or 21st century. So, historically speaking, it's a rather new development. I have no doubt that it will leave a lasting mark on American political culture, just because of its novelty and the seriousness of the accusations. Whether the accusations are right or wrong, that's a different story, but again, they're out there, they're part of the discussion, they're part of the debate. Just that discussion and debate will impact American politics for the future. In what way that will happen, I don't know, but I have no doubt that these things are very consequential.

—Magazine writer Olga Kiyan can be reached at olga.kiyan@thecrimson.com.