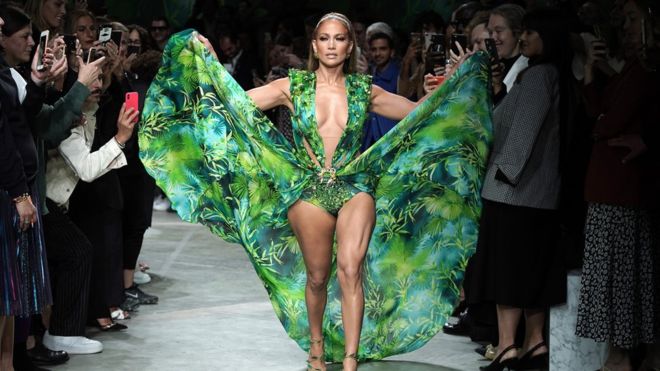 US singer Jennifer Lopez has revived her iconic green Versace dress that led to the invention of Google Images. By Courtesy of Getty Images
By Amelia Roth-Dishy, Crimson Staff Writer

There are some artists who transcend genre, embedding themselves so deeply in the cultural zeitgeist that at any given moment, they both shape and reflect the masses who adore them. Jennifer Lopez is one such — if not, the — artist of the last two decades. Critics tend to underestimate Lopez, describing her, albeit admiringly, as the most influential Latinx performer of her generation. But much like Warhol or Tupac, the rise and fall — and the rise again — of J-Lo is instrumental to the superstructure of all contemporary American culture. With her new film “Hustlers” taking flight at the box office and generating long-overdue awards buzz for Lopez and a constant flow of press junkets to look forward to, not to mention a Super Bowl halftime performance looming on the horizon, it’s time to dive into the history of J-Lo, which is, essentially, the history of the modern American cultural project. The year 2001, while politically and socially important for many reasons, is also a crucial year for the purpose of unpacking the J-Lo narrative, and must be studied as such with care.

Having released her bilingual debut album “On the 6” to substantial commercial success in 1999, J.Lo took the natural next step to superstardom in the age of narcissism and released an eponymous record, “J-Lo,” in January 2001. Hit singles included “Love Don’t Cost a Thing,” a glittery ode to late-stage capitalism’s crushing influence on modern relationships, and “I’m Real,” a lamentation for transparency in the digital age (“I’m real / what you get is what you see,” Lopez insists). The album shot to the top of the charts, achieving number one status in the U.S. and Canada Billboard charts. That September, Lopez performed a remix of “I’m Real” with Ja Rule at the MTV Video Music Awards, cementing her status not just as a triple threat but also as a cross-genre icon of performance.

Yes, in 2001, Jennifer Lopez and Matthew McConaughey represented peak rom-com casting. Funny how some things never change. “The Wedding Planner” is a delightful romp with no originality, save the architecture of the critical meet-cute: Lopez gets her heel stuck in a street grate and is physically swept off her feet to safety by a heroic McConaughey. More importantly, though, is the fact that in January, “The Wedding Planner” opened as the number one movie in America. And thus January 2001 marked a seismic cultural achievement for Lopez, unmatched by any artist of her age: She held both the number one movie and the number one album at the same time. If careers have cycles, Lopez’s subsequent attempts at omnipresence are inarguably an attempt to return to this moment of sheer and unrivaled cultural dominance.

It is impossible to forget what happened just before this apex year, and not only because the internet has rehashed and dissected it to pieces this week. According to legend, the green Versace dress that J.Lo wore to the 2000 Grammys is what caused Google to invent Google Images. Just last month, Lopez, in a genius promotional stunt, celebrated the 20th anniversary of that pre-viral moment by wearing an identical version of the dress and strutting down the Versace Fashion Week runway in all of her preposterously toned, 50-year-old glory. This is to say that there is a legitimate case to be made for Jennifer Lopez and her daring v-neck as archetypal fashion icon of this bizarre and hyper-performative 21st century. Yet Lopez made sure to enshrine her lifestyle clout in the year 2001 by founding her successful fashion line. At a press conference, she told reporters, “It’s time for the world to wear my look.” Indeed, this sporty-chic line cemented Lopez’s status as the aught’s supreme arbiter of mass culture in nearly every conceivable realm — the stage, the screen, the radio, and the all-important closet.

In the coming years, perfumes, reality shows, and tabloid drama would follow, but 2001 marked the beginning of the J.Lo mythology, the codification of a superstar who would endure past her contemporaries and into the birth of a new cultural age.

(All incredulities about the complete seriousness of this argument should be directed to the author, who is not whatsoever joking)

–Staff writer Amelia F. Roth-Dishy can be reached at amelia.roth-dishy@thecrimson.com.