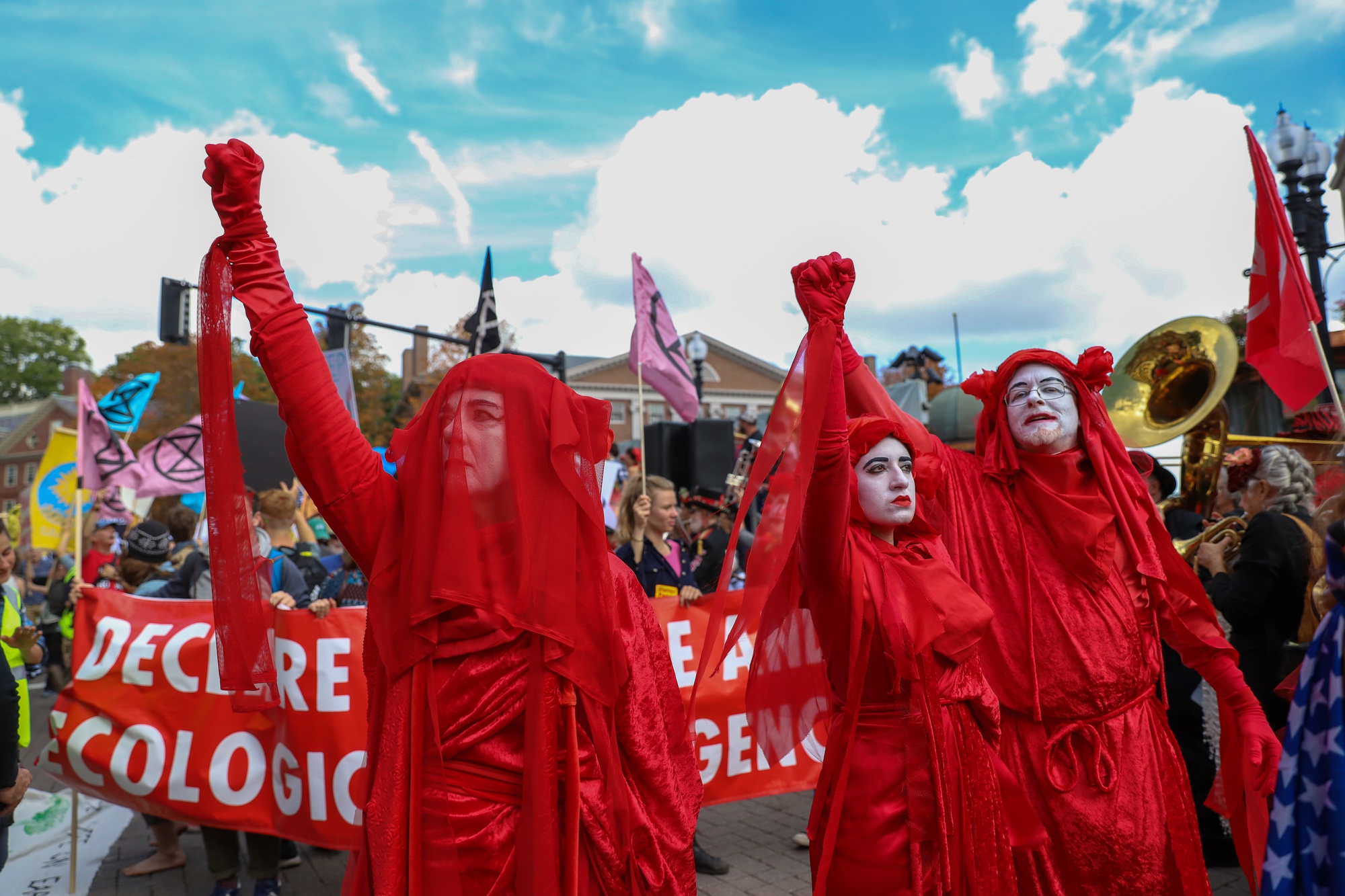 Members of the "Red Rebel Brigade" joined the Extinction Rebellion's die-in and rise up in Harvard Square during the HONK! parade to fight for government action regarding climte change, immigrant justice, and affordable housing.
Advertisement
Advertisement

And the Band Plays On

The street bands gathered in this rainy, Somerville square have come from around the country — and world — for the Honk! Festival, a three-day event held each Indigenous Peoples’ Day weekend for activist street bands to parade, party, and play in support of their respective, broadly leftist causes.
By Samuel D. Buckley-Bonanno

A tall man wrapped in a long skunk-fur-print cape and sporting a top hat decked with glowing lights greets me at Bow Market in Somerville. The circular horn beside him features boldly painted text reading “This sousaphone kills fascists.” Over the din of the crowd, I overhear someone call the coming night “the wokest fun there is.”

Inside Bow Market, a local marketplace-turned-backstage-area, musicians tune their instruments in a cacophony of brass. Groups cluster themselves by costume, adorned in everything from Victorian steampunk to mushroom hats to Super Mario Bros. outfits. Every instrument is as decked out as its player, whether with revolutionary slogans or Christmas lights tangled around the brass.

Out of the sonic chaos, melodies emerge. Soon, there’s a band lined up, ready for the crowd.

The street bands gathered in this rainy, Somerville square have come from around the country — and world — for the Honk! Festival, a three-day event held each Indigenous Peoples’ Day weekend for activist street bands to parade, party, and play in support of their respective, broadly leftist causes. 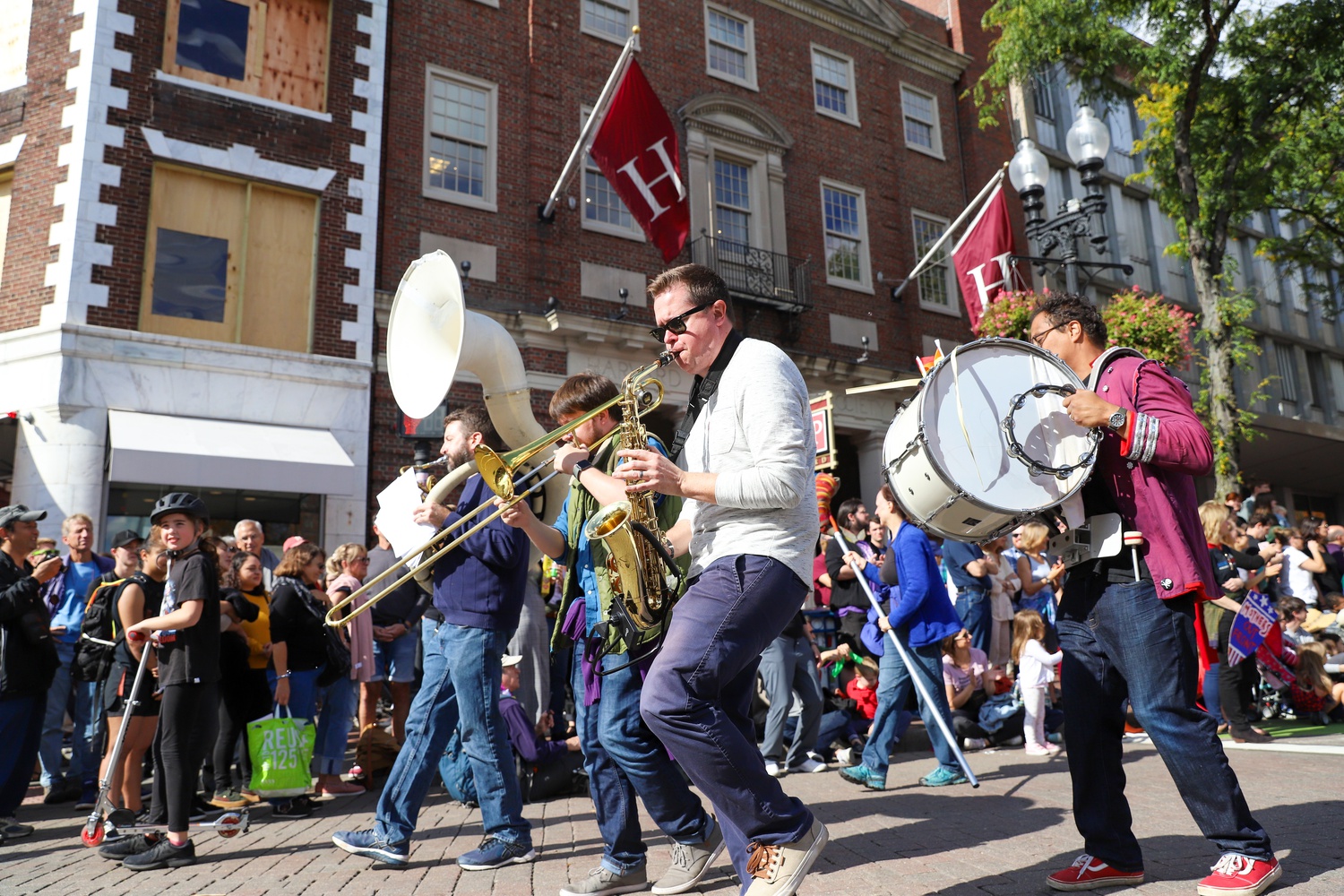 HONK! is a 3-day festival, usually occurring during Indigenous People's Day Weekend, thats brings brass bands from all over the world to Somerville to celebrate music, community, and activism. By Ryan N. Gajarawala

In addition to the all-band revue that takes place at Bow Market on Friday, the festival consists of several marches that culminate two days later in the Honk! Parade, traveling from from Davis Square to Harvard Square for the kick-off of Cambridge’s Oktoberfest.

For now, though, situated between a microbrewery and a kale smoothie cafe, Honk! is just getting started.

As bystanders wrap up their evening shopping, the sudden reverberations of a jazzy reimagining of Darth Vader’s Imperial March followed by Brazilian protest chants halts them in their tracks. Onlookers soon abound.

Those who stay get to experience everything from a “Where’s Waldo”-themed act to a performance from a band formed in memory of Emperor Norton, an early inhabitant of San Francisco who, in 1859, declared himself “Emperor of the United States” and went on to print his own currency.

The members of this latter band, “Emperor Norton’s Stationary Marching Band,” are exceptionally proud of their namesake, whom their page on the Honk! website claims “is not dead; he is waiting to be awakened in each of us” as he is “a manifestation of the absurd and unusual forces of the universe.”

On the bus to the festival, I get to experience a taste of the “absurd and unusual” — sitting next to me happens to be one of the top mentors in the School of Honk!, a person replete with stories and wisdom about the festival and its origins.

I learn from this man, who goes only by his first name, Carlos, that the festival itself began when the Second Line Social Aid and Pleasure Society, a street band from Somerville, realized in the early 2000s that it was not the only street band making social and political statements with its performances.

Since 2006, Second Line has been gathering with like-minded street bands from around the country and bringing brass-toned calls for justice to the Greater Boston-area. 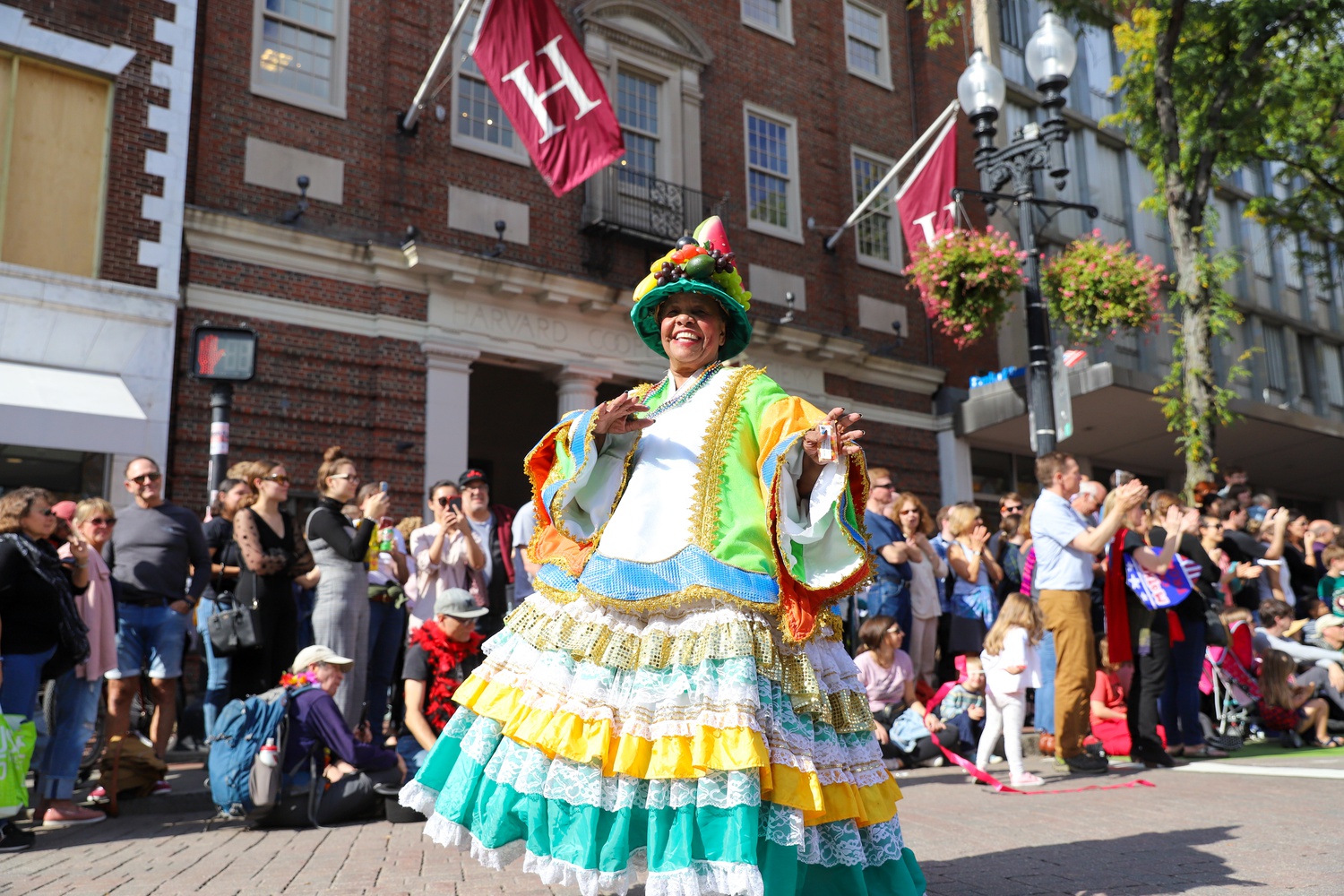 On the festival's third day, local community groups, artists, and activists promoting a variety of social causes join the brass bands in a vibrant parade from Davis Square to Harvard Square, converging with the Harvard Square Oktoberfest. By Ryan N. Gajarawala

The event, now officially hosted by the School of Honk — a music program for street performers — also taps into the tradition of European and South America musical activism.

This year, in addition to the Brazilian feminist musical collective, “Fanfarra Feminina Sagrada Profana” (the Sacred Unholy Female Fanfare), the Honk! lineup includes “Environmental Encroachment, Chicago;” ‘The Young Fellaz’ from New Orleans; and the “Bolschewistische Kurkapelle Schwarz–Rot” (the Bolshevik Holiday Orchestra Black–Red, according to their website), whose members regale us with the classic protest songs they played under East German rule.

I ask Carlos what keeps drawing him back to Honk!; he responds in parable. Quoting Gaddar, the Indian poet and activist, Carlos tells me a story: Gaddar was once asked, “What do we need to change?” The answer: “Everything.” In response, he was asked, “Where do you start?” The reply: “Anywhere.”

“I just happen to be playing music,” Carlos says. “So this is where I enact my change. In this corner, this is what we do to push history.”

As the night pushes onwards and the umpteenth band edges toward the crowd, the dancing takes on a frenzied pitch. Its formation dissolves as its members mingle with the crowd, and the distinction between performer and onlooker blurs. A trombone player just behind my ear startles me senseless, his horn emitting a piercing, joyous note. In the midst of chants against oppression, raised fists in the crowd start to sway to the beat.

As the rhythm picks up through the night, the staccato refrain of “Hey, hey, hey, hey,” rarely heard outside of college mosh pits, emerges out of the crowd. This time, however, it comes from the voices of seven-year-olds to 70-year-olds, and it entirely lacks the usual manic rush to the center that inevitably ends with an elbow to the ribs.

The dancing is just as convulsive, but punctuated with warnings against the iceberg’s melting, immigration raids, and authoritarian futures. Soon, a man locks arms with me, and we start clumsily dancing in circles together. Some tremendous catharsis is at hand; dystopian loomings turn bacchanal as a man in a pink bunny suit saunters across the stage, hammering out beats.