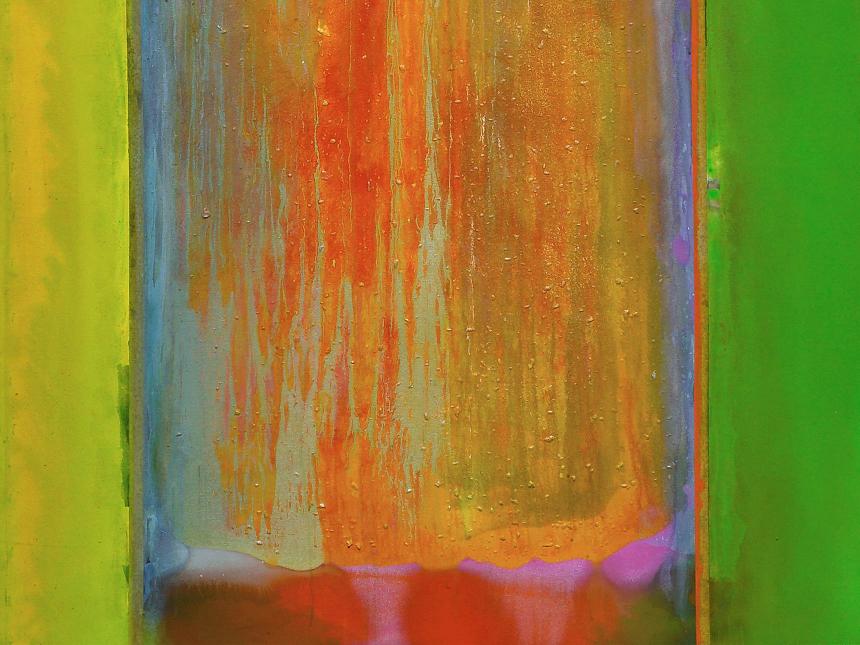 Drawing together works from its extensive collection and private loans, the Museum of Fine Arts, Boston again seeks to bring about a unique outlook on contemporary art through its new exhibition, “Contemporary Art: Five Propositions.”

The exhibition, which opened Oct. 26, splits the collection of pieces into five thematic groupings: Color Fields, Imaginary Beings, Sculpture, Material, and Utopias. In efforts to both showcase and rethink the MFA’s contemporary art collection, the exhibition draws upon work from 1899 to 2019, and incorporates artists from around the world. While the exhibition draws from a diverse range of sources, media, and perspectives, the MFA’s website states that “the installation pinpoints certain strengths — and, in doing so, sometimes reveals the blind spots.”

Color Fields, the first space in the exhibition, greets visitors with large hanging tapestries painted with swathes of color when they enter through the glass double-doors of the gallery. The works dominate the entrance, and captured the attention of Jon Feng, a patron of the museum who, upon entering the space, said he was “very excited about the ones hanging on the ceiling.”

The room features a collection of works, ranging from a piece by early 20th century abstract artist Helen Frankenthaler to one of Andy Warhol’s Oxidation Paintings. “Color catalyzes human emotion” is written on the gallery wall, and the works in the first grouping incorporate media such as painting, photography, and installation to capture the effects of color.

Color Fields ends with a large, paneled installation piece from artist Lucy Dodd titled “lé,” which separates the first space and the second grouping, Imaginary Beings. Jaelen R. McCarthy, another visitor, emphasized the importance of the transition from one grouping to the next.

“I liked how that boxed it off and then it opens up to a bigger space,” McCarthy said.

The next grouping, Imaginary Beings, brings together works focusing on what it means to be human through realistic and fictional portrayals of figures. From paintings like “Grey Cat with Madrone and Birch Trees” by Joan Brown to a multimedia work that incorporates a glass taxidermy eye, the grouping is united through discussion of human form, rather than common medium.

The third collection, Sculpture, begins with Simone Leigh’s “No Face (Pannier),” a terracotta and steel sculpture of a faceless woman in a large raffia skirt that stands between the two groupings, confronting viewers as they move through. This grouping especially draws on an international range of work, from British Rachel Whiteread’s “Double - Doors II (A + B)” to Japanese-American artist Isamu Noguchi’s collection of smaller sculptures to the West-African inspired work of Simone Leigh.

The inclusion of international pieces caught the attention of many patrons, including Kashima Yukie, a visitor from Japan.

“I didn’t know this museum had such a large collection from worldwide sources,” Yukie said.

Material, the fourth grouping, occupies the same large room as Sculpture and brings together artists who explore and defy the “conventions and stereotypes between materials and identity,” according to the text on the gallery’s wall.

The grouping features pieces such as “The Kiss,” a single-channel black and white video on Laser Disc by Raphael Montañez Ortiz and “Wing” by Lynda Benglis, a raised cast-aluminum piece that juts out into the space.

Utopias, the final grouping in the sequence, features only three works: Dan Flavin’s fluorescent light piece “Monument for V. Tatlin,” one of Isa Genzken’s concrete sculptures, and Peter Fischli and David Weiss’s photograph “Ehre, Mut und Zuversicht.” The pieces occupy the smallest room of the groupings, and act as a conclusion to the exhibition.

Patrons of the museum complimented the exhibition’s scope and diversity.

The exhibition draws from both its own collection and the loans from private parties, integrating lesser known works with staples of the Museum’s collection.

“My first impression is that I’m looking at a lot of work that I’ve never seen before, artists that I’ve never heard before,” said Peter Menendez, another patron of the museum.