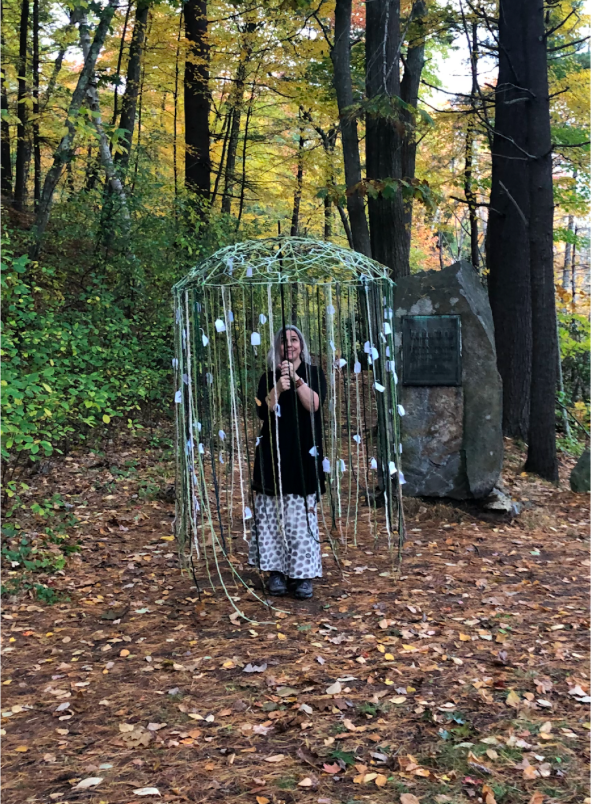 Artist Karen Krolak stands underneath an umbrella tagged with the names of audience members' loved ones. By Courtesy of Joseph P. Kelly
By Joseph P. Kelly, Contributing Writer

“We’re actually walking on the Emerson Thoreau Amble, which is this path that they were known to walk between their houses. And so that’s part of the inspiration for the name ‘Art Ramble,’” Muise said.

Muise discussed the different contexts of the word witness, ranging from the judicial to religious sense, and finally connecting them to the witness of grief and loss. That theme — witnessing grief and loss — was the subject of the active performance piece offered on Oct. 10 with Monkeyhouse founders Krolak and Harris.

The Monkeyhouse website describes the organization as “an award winning, Boston based nonprofit that connects communities through choreography.”

In “Relaying [78]’s,” immediately after entering the forest and walking past the first Art Ramble pieces, a living woman stood holding a giant crocheted umbrella with streams of yarn hanging down around her like a giant jellyfish. This woman was Krolak, the piece’s creator.

The co-creator of the umbrella and cofounder of Monkeyhouse, Nicole Harris, had another project on the scene called “Love Letters from Boston” that she describes on her website as “the choreography of correspondence.”

“It’s a way to remember that there’s always something good even on days that feel overwhelmed with negativity,” Harris wrote in an email of her work.

Harris explained that this event was an effort to intertwine the “Relaying [78]’s umbrella with her love letters. Krolak crafted the crocheted umbrella for “Relaying [78]’s” alongside Harris when Krolak was an artist in residence at the Newton Cemetery and Arboretum. The cemetery was then repairing a fence that was surrounded by willow trees, leading to the inspiration of the jellyfish-like tendrils that surrounded her.

“It gave me the idea to create this [umbrella] as a way, at first, just to be able to get people to be able to follow me on the guided tours I was doing,” she explained.

At the same time, Krolak had been working on a project called The Dictionary of Negative Space — a dictionary composed of previously undefinable concepts that Krolak aims to explain through the idea of negative space. Krolak organizes these wordless definitions by number: The term [78] actually refers to the definition of “ [78],” which is defined in her dictionary as “a being who does not make the grade to public memory after death.”

The inspiration for the dictionary came from the loss of Krolak’s mother, father, and brother in a car accident in 2012 that left her feeling as though she didn’t have the words to articulate her emotions.

“I found myself struggling to be able to explain to people what was happening in my head in, in my world, in my life,” Krolak explained. “I had thought that if I could just find thirty words … I could make sense and talk to people again.”

Krolak explained that through this difficult process of grief, there was no language for loss, and that this understanding allowed her to understand the power of wordlessness.

For the performance, Krolak wore her mother’s shoes.

“[My mother] was always talking about having to walk in other people’s shoes,” Krolak said. “And to think about the idea of walking in her shoes being a way that kind of keeps some aspect of her presence in my life here within a process like this [art performance] ... I think that she would understand the public good that comes out of it and the way in which that kind of feels like something she would be doing — to take care of an entire community.”

Krolak invites people wherever she brings the umbrella to place tags on the strands hanging from the umbrella, tags with the names of [78]’s that people want to be remembered. But Krolak said that although the project’s definition of a [78] focuses mainly on the memory of people lost, there are other losses that are just important.

“One of my favorite [tags] just said ‘Elroy the cat,’” she said.

Krolak and Harris encouraged the audience at the performance event to write a “love letter” to a [78] after placing a tag for that person on Krolak’s umbrella.

Krolak also explained that during one of her tours, her husband wanted to carry the umbrella for her because he thought it was too heavy for her to carry for the whole tour all by herself.

“I realized, as a metaphor, that’s a really beautiful thing, to be able to pass that process of holding onto all of that [loss] to somebody else… and by the end of the tour, every single person on the tour had carried it at some point in time,” Krolak said.

After this realization, Krolak began taking the umbrella to the many places she visits, to replicate this act of passing on the weight of loss to others.

“They were dancing with it and taking pictures,” Krolak said of the first time that she passed around the umbrella. “Instead of it feeling like something that’s this heavy burden, it was something that made them feel special and joyous.”