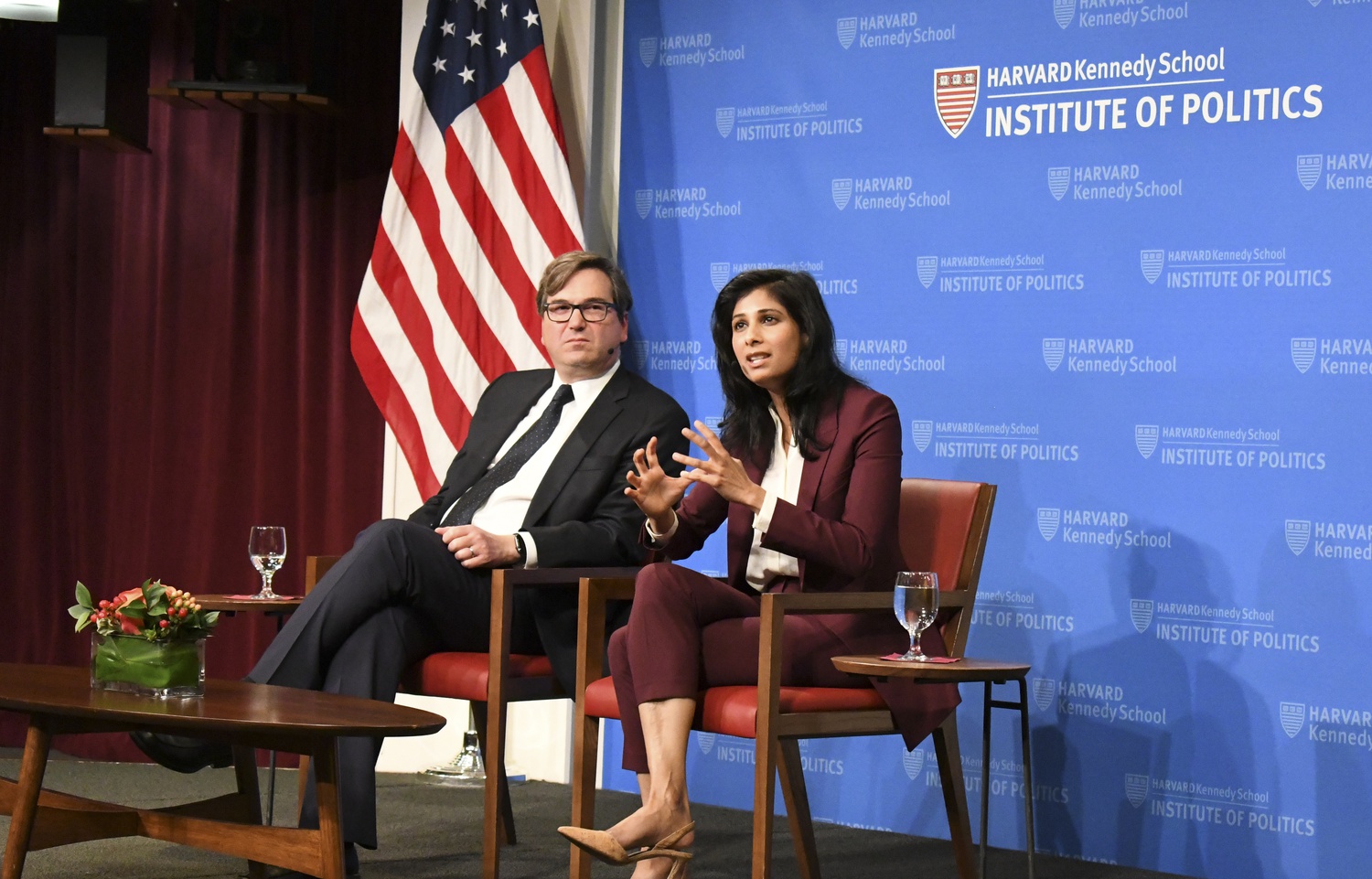 Gopinath, who is on leave from her appointment as a Harvard Economics professor, spent most of the talk discussing the impact of recently levied tariffs on trade between the United States and China. Economics Professor Jason Furman moderated the talk, which was delivered as the annual Malcolm H. Wiener Lecture in International Political Economy.

“What we’ve seen in the data is, for the goods that continue to come from China, there has barely been any change in the dollar price that Chinese exporters get,” Gopinath said. “The tariff is being paid almost completely by U.S. importers.”

Gopinath, who was named IMF Chief Economist in October 2018, also discussed differing economic growth rates in the global economy. She said she believes Latin America is the region that is seeing the least growth, while emerging countries in Asia continue to see growth rates exceeding 5 percent.

“If I look at emerging and developing economies and exclude China and India … their per capita growth for 2019, it was 0.4 percent,” she said. “There was an optimism that we would see much more convergence and emerging markets would be growing at much faster rates by this time.”

Furman concluded the talk by asking Gopinath for her opinion on Libra, Facebook’s proposed blockchain digital currency. His question comes less than a week after Facebook CEO Mark E. Zuckerberg testified about Libra in front of the House of Representatives Financial Services Committee in Washington, D.C.

“When you think of a large organization like Facebook that has 3.5 billion users, [Libra] can have a very dramatic impact on payments and how people transact in the world,” Gopinath said. “So these are issues that come in of whether they have the right protections in place, in terms of customer protection, protections for money laundering, terrorism financing issues.”

Gopinath said she believes regulation is “nowhere near ready” to address these issues.

Phillip Meng ’23, who attended the talk, said he thought Furman’s line of questioning was “interesting,” but said he believes that the disparity between the IMF’s initial optimistic projections earlier this year and its current projections was not adequately explained.

“I think Professor Furman’s line of questioning was appropriately tough in really questioning why the IMF projections this year have been particularly inaccurate,” Meng said. “I’m not sure that question was completely addressed, right? Because that consequence is confidence in the IMF and its confidence in its projections. When 2020 opens, will we trust what the IMF says?”

Rundong Ji, a junior fellow at the Mossavar-Rahmani Center for Business and Government, said he appreciated that the subject matter that Furman and Gopinath discussed could be applied to his research.

“I was happy to see that the IMF’s concerns are related to my current research topics relating to the labor income share,” Ji said.