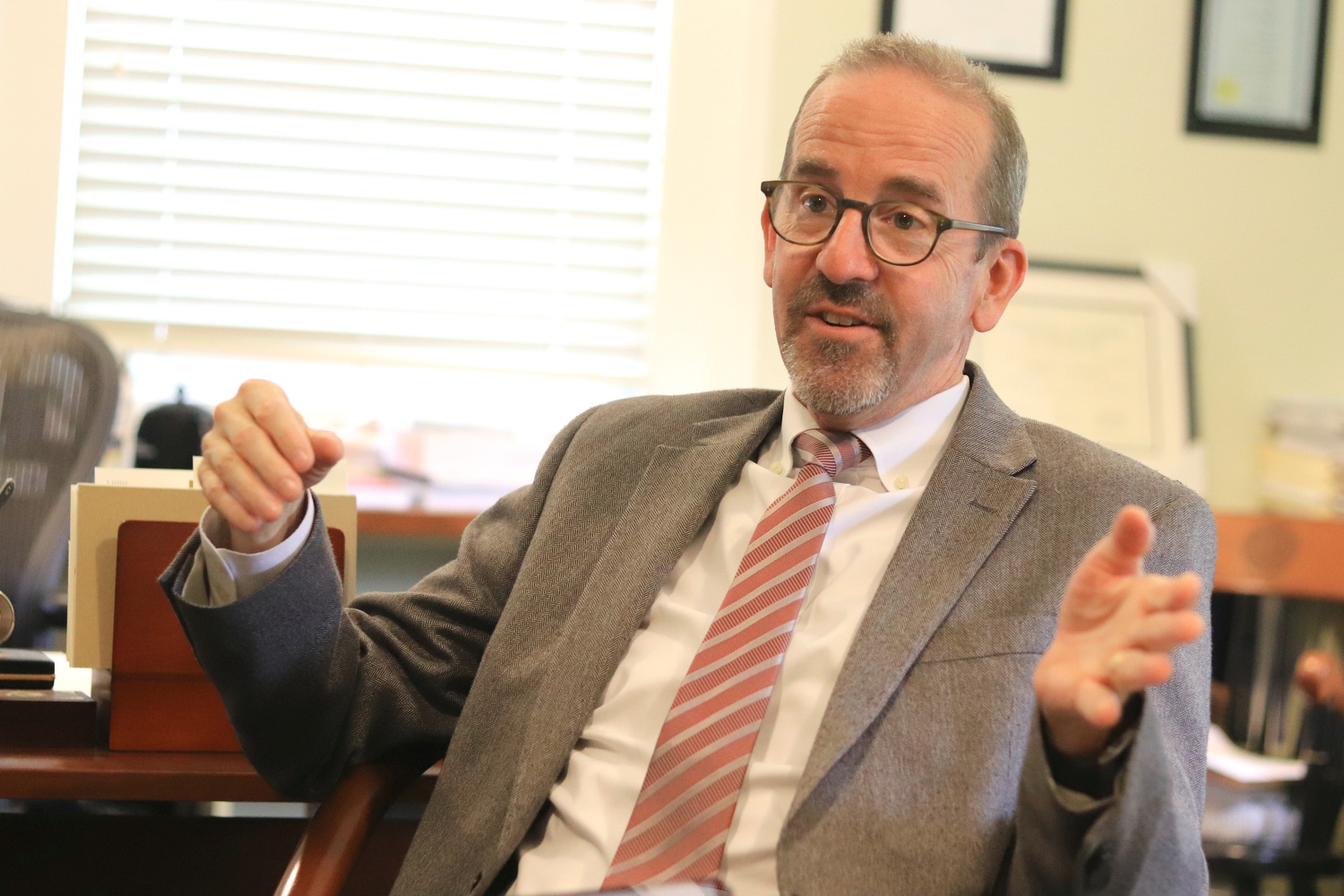 Dean of the School of Engineering and Applied Sciences Francis J. Doyle III speaks about the upcoming move to Allston in his office during an interview on Monday. By Kathryn S. Kuhar
By Ruth A. Hailu and Amy L. Jia, Crimson Staff Writers

The School of Engineering and Applied Sciences’ new Science and Engineering Complex in Allston — which officially opens in June 2020 — will house several collaborative spaces designed to bring together students across the University, Dean of SEAS Francis J. Doyle III said in an interview Monday.

Doyle said he hopes these spaces will provide opportunities for “serendipitous collisions” between students and faculty members that will facilitate the exchange of ideas. To this end, the building will be designed around having common areas with ample furniture, rather than “linear corridors and doors off the corridor,” according to Doyle.

The building is designed around a central atrium that extends from two stories below ground to six stories above ground. SEAS spokesperson Paul Karoff said the building’s architect called it a “vertical Harvard Yard,” where different students could mingle.

“You might be on the eighth floor and be able to see what’s going on the sixth floor... so everything becomes more cohesive in that regard,” Doyle said. “That’s probably one of the most impressive architectural features in the building.”

One of the building’s main features is a “maker space” located on the ground floor, which will contain facilities for 3-D printing and other tasks. This space will be surrounded by supplemental labs for the active learning components of various courses, such as those in Mechanical Engineering and Electrical Engineering.

Doyle said supporting SEAS’s teaching mission is his “day one” priority. He added, however, that he hopes to eventually open up the “maker space” to other members of the Harvard community for their individual projects.

As it stands, courses and activities at SEAS will utilize about half of the capacity of the building, Doyle said. He said he hopes to work with College and University administrators to ensure the remaining space is optimally allocated to courses outside of SEAS.

Doyle said this will resolve existing space constraints for storing larger projects and will serve as a way for groups to host meetings and events.

“Today, if one of the student clubs wants space to do something, we are shoehorning them into the corner of somebody’s lab or a space in the back of a classroom or wherever we can find space,” Doyle said.

In the new building, however, student groups will have a “real operational space that is assigned to them.”

Doyle said he hopes common spaces and the capacity of the building expand beyond SEAS and incorporate all of FAS, describing it as a “blended solution for everybody.”

“This isn't just some engineering outpost — this really is a part of the expanded Harvard fabric,” Doyle said. “When you expand fabric, you stretch and strain sometimes, but let’s make it integrated.”