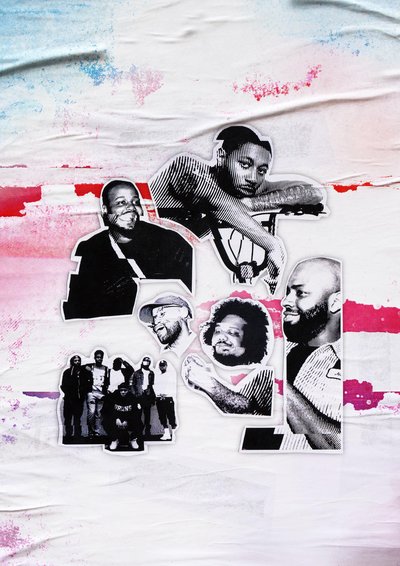 On Sept. 27, the Artists for Humanity Epicenter in Boston hosted Red Bull’s Beantown Uprising, a festival event sponsored by the energy drink brand with the hopes of celebrating the city’s influence in the hip-hop industry.

The music line-up consisted of Boston’s most beloved hometown artists, including Cousin Stizz, Michael Christmas, and collective Van Buren. Boston businesses also partnered with the event, and Bodega — a local streetwear shop — built an art installation of a convenience store in homage to the entrance of their own iconic Boston shop.

As the crowd filed into the venue, many formed a line for Bodega’s free custom t-shirt table. The limited edition shirts were exclusive to the Beantown Uprising event, and had the musical acts and brand sponsors located on the back. The public was allowed to choose from various decals such as roses and bedazzled Red Sox logos to create their own unique wearable souvenirs of the night.

The first act of the night was Van Buren, a collective rap group hailing from Brockton, Mass. In a sudden flurry of movements, all the members got on stage and began to dance erratically as one member took the mic and rapped. Lord Felix — a Van Buren member — was raging and throwing himself from one side of the stage to the other. At one point, he brought a fan wearing his iconic visor up on stage to jam out with the group.

Michael Christmas performed shortly after. Christmas began by telling the crowd why the event was so important to him.

“Don’t make me emotional now, but I’m in a room filled with my family,” Christmas said.

Christmas performed many of his more recognizable songs, like “Honey Berry,” and also added four previously unperformed pieces to his set. During his performance, Christmas asked the crowd to split into opposite sides, which clashed together and erupted a mosh pit in the center of the floor.

Concert goer Frederick Ramos was impressed by the venue and the artist lineup.

“I like the aspect, like it’s a gallery,” Ramos said of the location. Various canvases of contemporary and modern artworks hung across the venue.

When asked about the artists that would be performing later on in the night, Ramos mentioned his special ties with the Van Buren collective.

“I went to highschool with a couple of them so it’s cool seeing them out here, you know, making waves,” Ramos said.

Van Buren member Lord Felix also said that the concert venue appealed to him, and that he wants to give his fans the best experience possible.

“This is what I want my shows to be likewhen I start doing more bigger shows. I want them to be an experience,” Lord Felix said. “They have the t-shirts over there, they got fucking caterers. It’s dope.”

With the support of his family and friends behind him, Lord Felix said he wants to put the best of himself on the stage.

“I know they’re going to turn up with me, so I’m going to feed off everyone’s energy. I always give it my all every performance anyways, but this is like an extra boost,” he said.

Throughout the night, DJ duo Bearly Yvng continued to remind the crowd of the importance of the evening and what the festival embodied.

“What we try to do is to lift up the culture of Boston,” the MC said.