Portrait of an Artist: Mick Rock 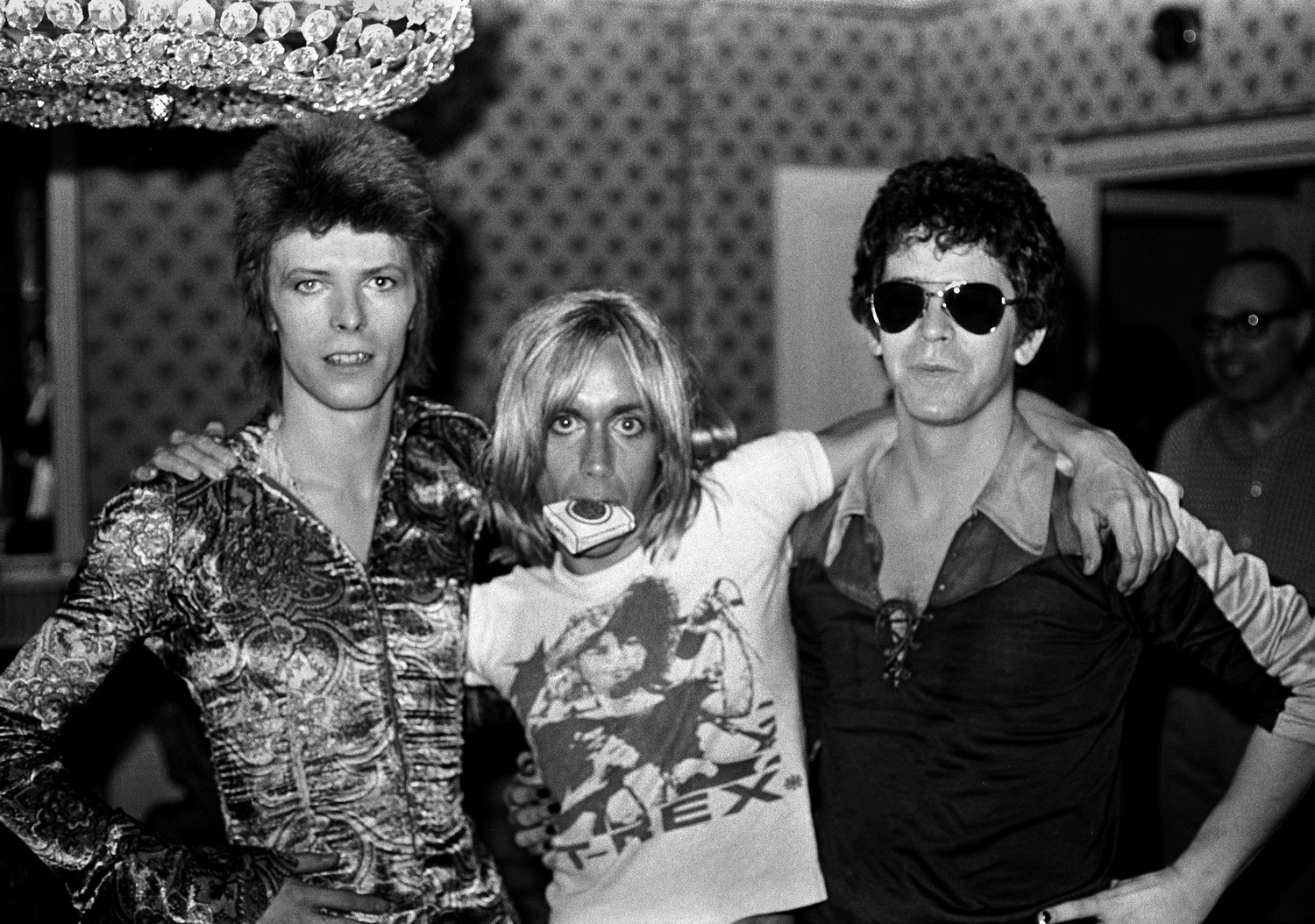 Longstanding rock photographer Mick Rock has shot artists including Lou Reed and David Bowie. By Courtesy of Behind the Lens
By Kathryn B. Klein, Contributing Writer

Known as “the man who shot the ’70s,” Mick Rock is a living legend in the world of music photography. Even if you don’t recognize his Dickensian name, you’ve definitely seen his iconic photos, including one of the most recognizable images of Queen, the famous bubble bath shot of Motley Crue, and his portraits of David Bowie. In his interview, he shared countless stories laden with literal music history, as well as wise musings on finding one’s passion. He will be appearing in Behind the Lens at Boston City Winery on Oct. 7.

This article has been edited and condensed for clarity.

The Harvard Crimson: What’s the coolest experience you’ve had shooting photographs, or what was something you never expected to turn out the way it did?

Mick Rock: I never expect anything. But I know it will turn out fine because everything always does — just one of those weird things, you know? Fate has its role to play. For me, the most recent shoot is always the one that’s hottest in my mind … People say, “What’s your favorite photograph, Mick?” Well, I don’t know, it depends on the air of the day, the day of the week, the month of the year, and whether or not I’m having my period — because if I’m having my period that could put a whole different cast on things!

THC: How have changes in the music industry over the years impacted you?

MR: I just shoot the same as I always shot. I don’t think about things like that. I mean, people are either going to love ‘em or they’re not. So, I don’t know. I mean, obviously the digital change has changed a lot of things and I love digital. I think that it gives you so much flexibility. One is you can see what you’re up to, always. Two, you can show them to people quickly. Three, if you want to send a shot to outer Mongolia, you can do it within about three minutes of actually taking the pictures. Obviously you’ve got to know someone in outer Mongolia and I actually don’t … When I go out, I don’t take a bloody camera with me, I take my phone like everybody else. But if you want me to bring a camera, you’d better have a little stash of gold in your hand to prime me with. That’s not totally true, but I like to say it.

MR: I don’t know what I’d be doing. I know what my parents thought I would probably be doing. I’d gotten a scholarship to Cambridge University in England and they thought I was going to go there and be very sensible, get my degree and maybe become a lecturer. And that wasn’t what I had in mind. I really wasn’t interested in a career, I was interested in an adventure. And a fucking adventure is what I got, for good and for bad.

I picked up a friend’s camera on an acid trip — that’s what got me rolling into photography. And it got me very excited, the explosions. I mean, I was really high. Every time I clicked, you got this kind of explosion, and then, every time there was a click, everything changed. I was mostly photographing this young lady and her face went through a million different changes. And after that I was just curious about it. I wasn’t really thinking, “Oh I’m going to be a photographer.” … And the musicians, well it didn’t pay very much money but so what? I got to do what I wanted to do. And it kind of grew — such that now my old rock and roll pictures are worth a lot … Just David Bowie in 1972, if you think of that alone, forget even about Freddie, and Lou Reed, and Debbie, and Rocky Horror, and Syd Barrett, and the Ramones, and the Sex Pistols… If it was alive, I would probably shoot it back in those days.

THC: What’s one moment you wish you’d captured on film?

MR: I do remember being at a party and John Lennon was there and I was introduced to him and I was kind of in awe. This is probably late ‘70s, I mean it had to be, because when was he shot, 1980? And I was thinking of shooting but somehow I couldn’t do it. It’s a weird thing, I know, but it kinda froze me, so I do remember that. But mostly if I wanted to shoot it, I’d shoot it and not think too hard about it. Because you can’t think too hard. The thing about photography is, it’s not an intellectual pursuit, it’s a totally visceral, intuitive thing. And even though I’ve shot for Gucci and that tends to be a bit more mapped out, most of the pictures I’ve shot I was the art director as well. The famous Queen shot, that’s all Mick Rock. I came up with the idea, I shot it, I organized them, I got the lighting, I did everything.

THC: How did you work with artists who had their own creative vision for the shot?

MR: Mostly they just let me get on with it. David was very good. He could take direction very well … And Freddie. And today, of course, I’ve been around so long that I have a certain, shall we say, reputation, so going in people, they expect me to provide the magic. And of course I do. Because that’s my job.

THC: When working with artists more than once, how did you keep up the magic for a second shoot? How did you come back with something new?

MR: I just did it … And I don’t know, it always works. Don’t ask me why. Obviously somebody up there was sprinkling fairy dust on me, or was it cocaine? I’m not sure, it was a bit of both. You have to understand I haven’t touched anything (well I have a little marijuana sometimes) in 23 years. When you have quadruple bypass heart surgery, as I did in the Christmas of ’96, it’s very painful. So, people said to me afterwards, “Don’t you feel tempted?” And I said, “No, I don’t feel fucking tempted!” What I went through was very uncomfortable and I don’t want to duplicate it. And I’ll tell you, in 2012, also at Christmastime, I had a kidney transplant. So, God has given me a couple of whacks upside the head just to remind me: Don’t be a dick, Mick.

THC: So when you work with artists like Andy Warhol who aren’t musicians, does that change the dynamic?

MR: It doesn’t really change anything … I mean, Andy was a bit different because Andy was Andy! I do remember though, shooting him and Truman Capote for a High Times cover many many, many years ago and going to the Factory. And the Factory was then on Union Square in the middle of New York and it was a mess. The space he let us shoot in was a fucking mess. And I was bouncing up and down because I’m fairly bouncy when I shoot and at some point he said to me, “Excuse me, Mick,” and I’d been doing it for a while and he must’ve realized it before, but he was just pointing out that I was jumping up and down on a bunch of canvases. I mean they were rolled canvases you wouldn’t have known what they were. And I thought, “Oh, really? Might be a million dollars under my feet.” But I remember his attitude, he wasn’t really that bothered he just thought I might like to know.

THC: Who were your biggest inspirations for your work?

MR: I remember having a period, and that would have been back in the ‘80s, where I’d spray backgrounds to my photographs. But at that period I was interested in Jackson Pollock, notwithstanding the fact that he died a horrible death and killed somebody else in a car crash. Nevertheless, for me, he’s probably the greatest American artist, unbelievable. Strange fellow, but his art was fantastic. I like Man Ray. I wasn’t really interested in photographers when I started out but when I discovered Man Ray I thought, “Oh, he’s got the same initials as me!” Of course, I’m a tall, lanky Londoner, his real name was Emmanuel Radnitzky and he was a short Jewish guy from Philadelphia. Not that I have a little bit of Jewish in me, I’ve got a little bit of all kinds of stuff in me. I’m a hybrid. I’ve got Sicilian in me, too. I think the Sicilian in me takes the photographs, like a hit man.

So, [being a photographer is] obviously what I was meant to do. I’ve had people ask me, “Oh Mick, I wish I had this and I wish that,” but my first question to them is one, what do you do and two, are you good at it? I remember a guy who was an accountant and he went on and on and on (I think he’d had a few drinks) and he regaled me, “I always wanted to be a photographer.” I said, “What do you do?” He said, “Well, I’m an accountant.” And I said, “Well, are you any good at it?” He said, “Oh yeah, I’m a really good accountant. Do you need one, Mick?” And I said, “That’s what you’re meant to be doing.” If you’re really good at something, that’s what you’re supposed to be doing in life, you know? Don’t worry about what anyone else is up to, because that’s their problem.