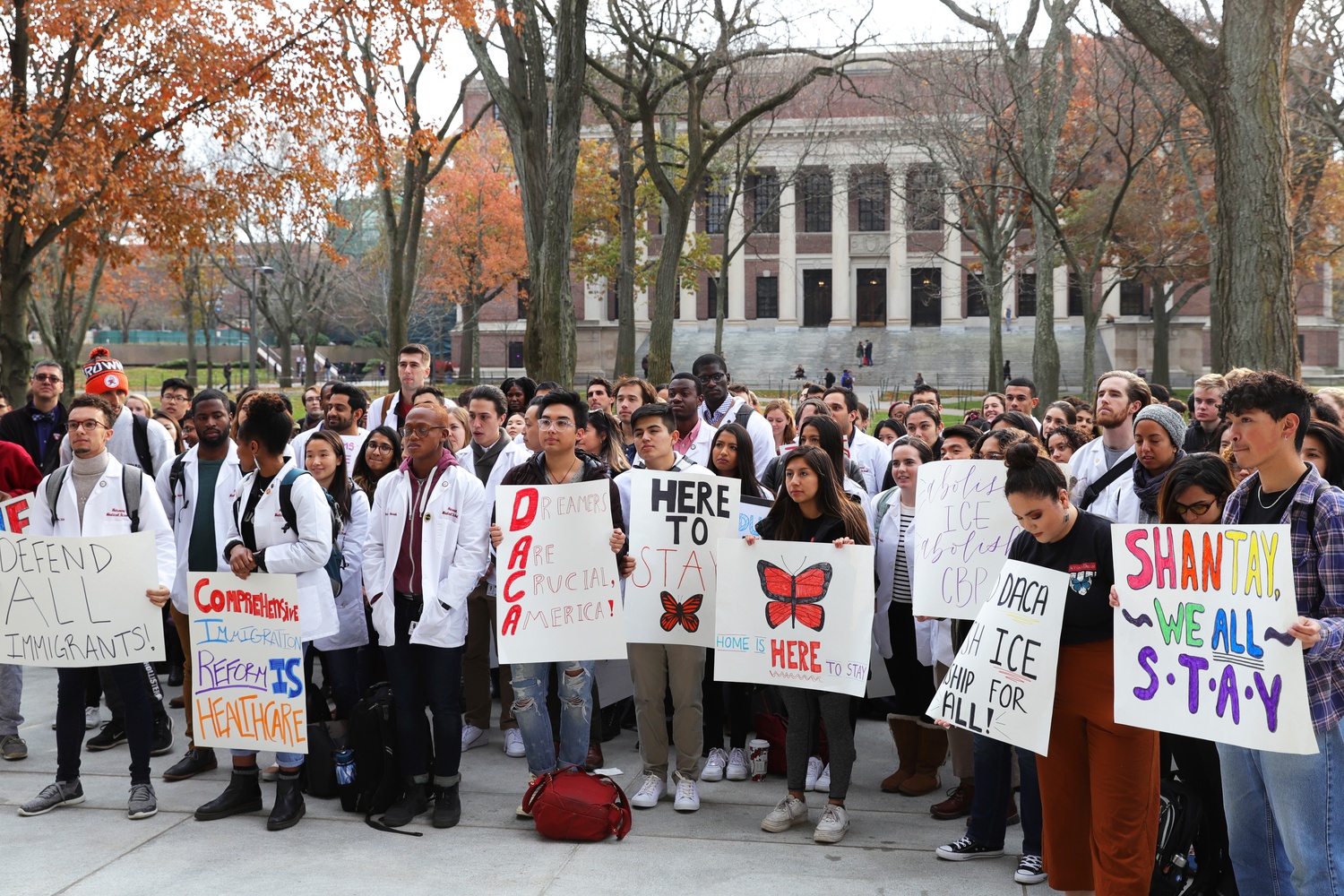 Harvard affiliates gathered at Memorial Church Monday afternoon to show support for immigrants at the Walk Out to #DefendDACA ahead of the Supreme Court hearing a case which will determine the fate of the DACA program. By Kathryn S. Kuhar
By Devin B. Srivastava and Amanda Y. Su, Crimson Staff Writers

Hundreds of Harvard affiliates walked out of class and gathered in Tercentenary Theater Monday to demonstrate support for the Deferred Action for Childhood Arrivals and Temporary Protected Status ahead of a Tuesday Supreme Court hearing on DACA.

Act on a Dream — a student-led immigration advocacy group at the College — organized the walkout along with 21 co-sponsoring campus organizations, including Divest Harvard and the Palestine Solidarity Committee.

The walk-out fell one day before the Supreme Court hears a case on DACA, an Obama-era program that allowed children brought to the United States by their parents to live and work in the country. The case will determine the fate of the program, which has been challenged by the Trump administration.

The more than 200 walk-out participants congregated in front of Memorial Church for a series of chants and speeches Monday afternoon.

Education School Professor Roberto G. Gonzales said that upcoming hearings are a source of unrest for those who fall under DACA and TPS protections.

“The stress, anxiety of tomorrow on many members of our community is palpable, and the weight cannot be more excruciating,” he said.

Doris Reina-Landaverde, a custodian at Harvard who received TPS in 2001, told the crowd that TPS recipients live in fear because of the hearings.

“We are under attack. We are thinking every day — what will the court decision say?” she said.

A court case about TPS — a program that grants temporary refuge in the United States to residents of countries afflicted by conflict and natural disasters, among other dangerous conditions — has already commenced, and a decision from the appeals courts is projected to come out soon. The DACA and TPS court cases will determine the futures of one million undocumented immigrants, 700,000 DACA recipients, and 300,000 TPS holders. 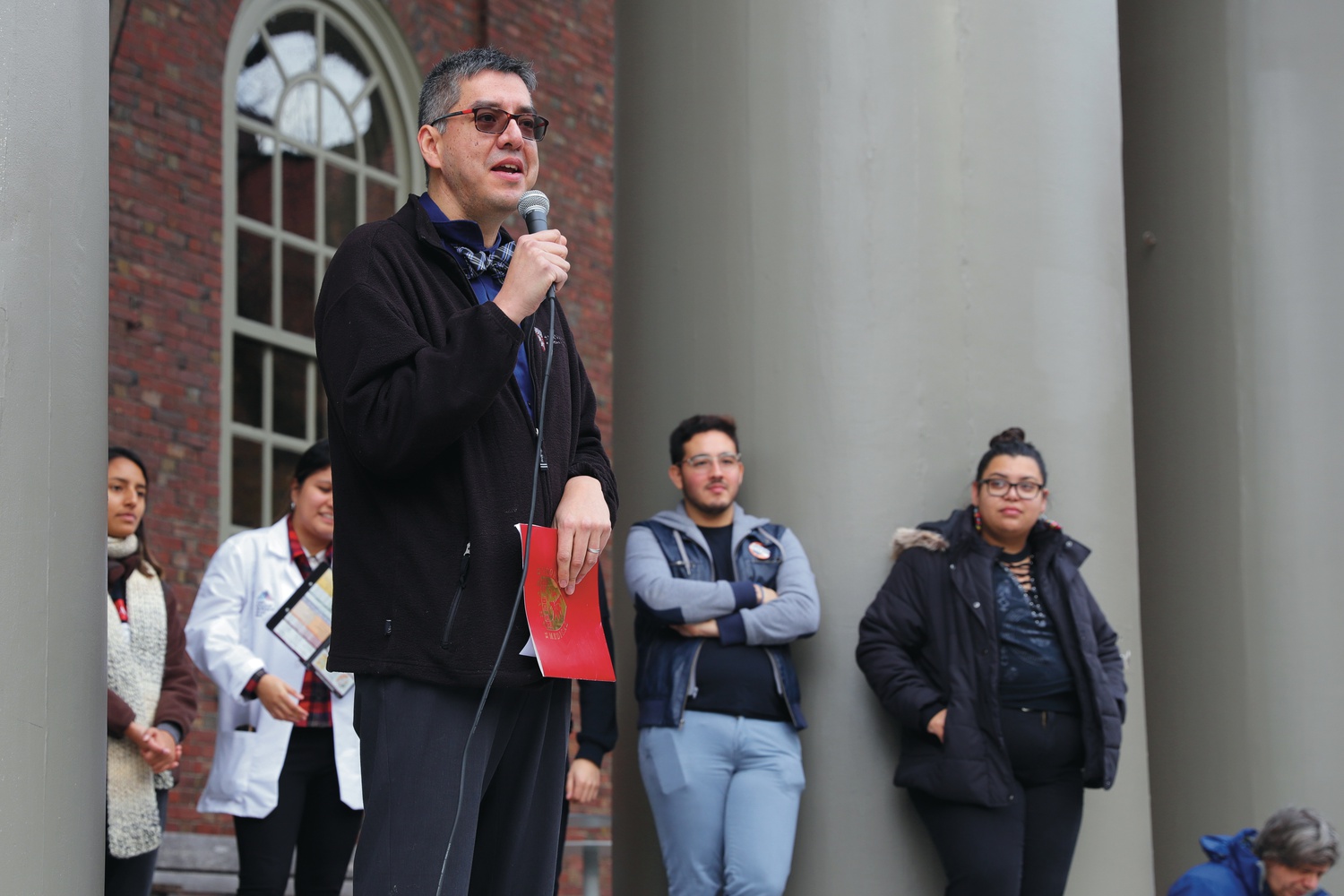 Act on a Dream Co-Director Diego Navarrete ’21 spoke about the benefits of DACA, but also its limitations. He pointed to pathways to citizenship for all undocumented immigrants as the end goal.

“DACA is literally breadcrumbs,” Navarrete said. “We need it to exist, but it’s the bare minimum.”

During the walk-out, speakers and organizers condemned The Crimson’s decision to request comment from an Immigration and Customs Enforcement spokesperson in their coverage of Act on a Dream’s “Abolish ICE” protest in September. After the protest had concluded, Crimson reporters emailed ICE’s press office for comment. More than 900 people and several student groups have since signed an Act on a Dream petition criticizing The Crimson’s decision to reach out for comment.

In her remarks, Act on a Dream Co-Director Emily A. Romero ’21 called on all walk-out participants to decline any interview requests from the Crimson.

Crimson President Kristine E. Guillaume ’20 wrote in an emailed statement that the publication seeks to hold itself to the “highest standards” of journalistic practice with its policies for reaching out for comment.

“Fundamental journalistic values obligate The Crimson to allow all subjects of a story a chance to comment,” Guillaume wrote. “This policy demonstrates a commitment to ensuring that the individuals and institutions we write about have an opportunity to respond to criticisms in order to ensure a fair and unbiased story.”

“We welcome feedback from our readers and from those we cover. In this case, we met with representatives of Act on a Dream to hear their concerns and explain our approach,” she added.

“We who do not have the power to vote are relying on everyone extending a hand to support us,” she said.

Act on a Dream organizers said they would soon be circulating a petition calling on the University to extend support to undocumented students in the form of legal resources and additional “administrative staff.”