In An Instant: A Commemoration of the Birth of Polaroid 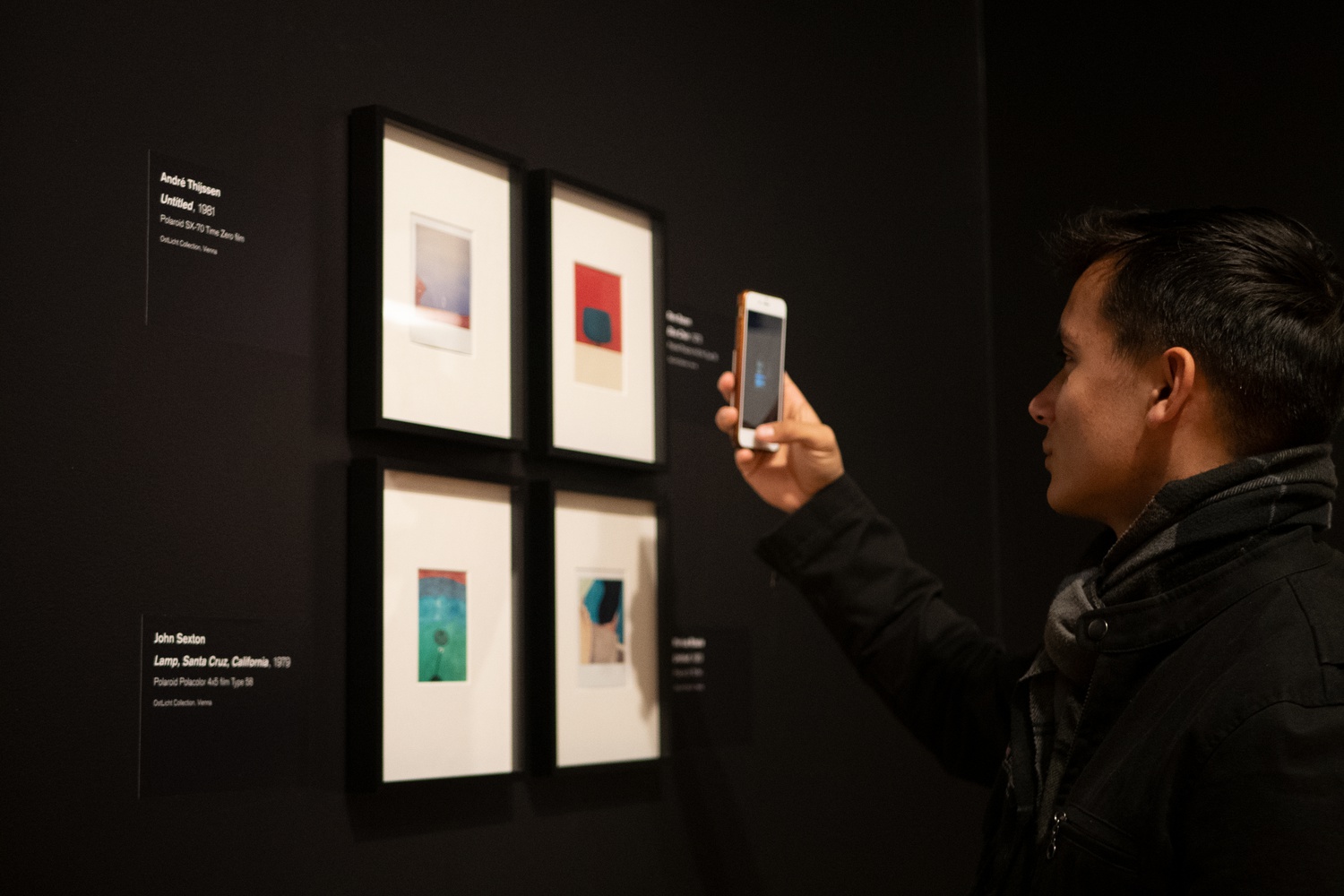 On Saturday, Nov. 9, the MIT Museum held a day-long special event celebrating Polaroid — the Cambridge-born camera that captured people’s hearts from its invention to its modern day resurgence.

The ongoing Polaroid Project exhibit, tied together by a wide strip of the signature Polaroid rainbow, showcases artwork of all styles as well as the various iterations of Polaroid cameras. Cases of artifacts dominate the center of the room, while artwork, grouped by style, lines the walls.

Beyond the exhibit, the day’s agenda included a storytelling hour, a showcase of historic Polaroid models at a “Polaroid Petting Zoo,” spotlight tours with the curators, and a presentation entitled “Lady Gaga, Polaroid, and the MIT Museum: A perfect trifecta.” The exhibit also featured interactive elements, including a community pop-up installation, where visitors were encouraged to bring their own Polaroids and add them to the wall. The opening day of the exhibit marked Polaroid Reunion Day, an open invitation for former Polaroid employees to talk and reminisce while surrounded by the products they helped create and the resulting artwork.

Former employees Peter Carcia and Ladan Homayoon discussed what it was like to work under the large and influential company that Polaroid has become.

“It was a hierarchy that didn’t think women would make good engineers,” Carcia said of Polaroid’s earlier days. “I made it a personal thing to go find a talented woman. Ladan is a talented engineer.”

“We were just laying the bricks as they were driving the train,” Homayoon added.

For the former employees, the exhibit inspired nostalgia: Some of the very cameras they helped develop were on display.

“I worked on SX70, the first camera you see here. I worked with TI to put together the circuit,” Carcia said.

The exhibit itself mirrored the art-meets-technology ethos of the company: The museum page notes that the display encompasses “various dimensions of the art-technology relationship through the exhibition of both art and artifacts.”

“It was something I really enjoyed about being there, that it was both an engineering company and that they were so interested in the arts,” Jennifer K. Ellwood, a former engineer in product design at Polaroid, said.

Homayoon also commented on Polaroid’s contributions to the evolution of contemporary photographic artwork. Just as the art of painting had its movements, the influence of various artistic styles appear in the show’s Polaroid artwork as well: The exhibit features impressionism, mixed media, still life, and collage, to name a few. Short blurbs on the walls highlight these vaguely grouped styles and explain each movement, as well as its applicability to Polaroids.

“The way Monet and the whole impressionist movement came about was because paint became portable and they were able to create paintings really fast and in real time,” Homayoon said. “Polaroid did that.”

Beside the artwork, display cases stand populated by different iterations of Polaroid cameras — some more robust, others more technical. From the very first Polaroid built to the more modern Polaroids of today, the exhibit holds a wide assortment of the company’s large, classic machines. Some display cases hold prototypes and moving parts, while still others spotlight the specific engineer that helped develop that camera.

“I’m kind of drawn to the cameras, they just look out of place — thinking about how your cameras always fit in your phone [these days],” Tin D. Nguyen, an MIT volunteer, said.

Though the older Polaroids may now be outstripped by slimmer, higher-tech cameras, many at the exhibit said they feel Polaroid has its place in the modern digital age — and that its current second wind is valid.

“There are so many different ways to use Polaroid products and film, like you can manipulate the images once the image comes out, you can have them instantly … there are things that Polaroid still offers that the digital cameras don’t. So in that way I do think they’re still valued,” Ellwood said.

Audience members and participants throughout the exhibit said that they saw limitless potential for Polaroids — and that this classic camera won’t be going away any time soon.

“I feel like… people rediscover these things, and for a new generation, it has a lot of novelty value,” Nguyen said.