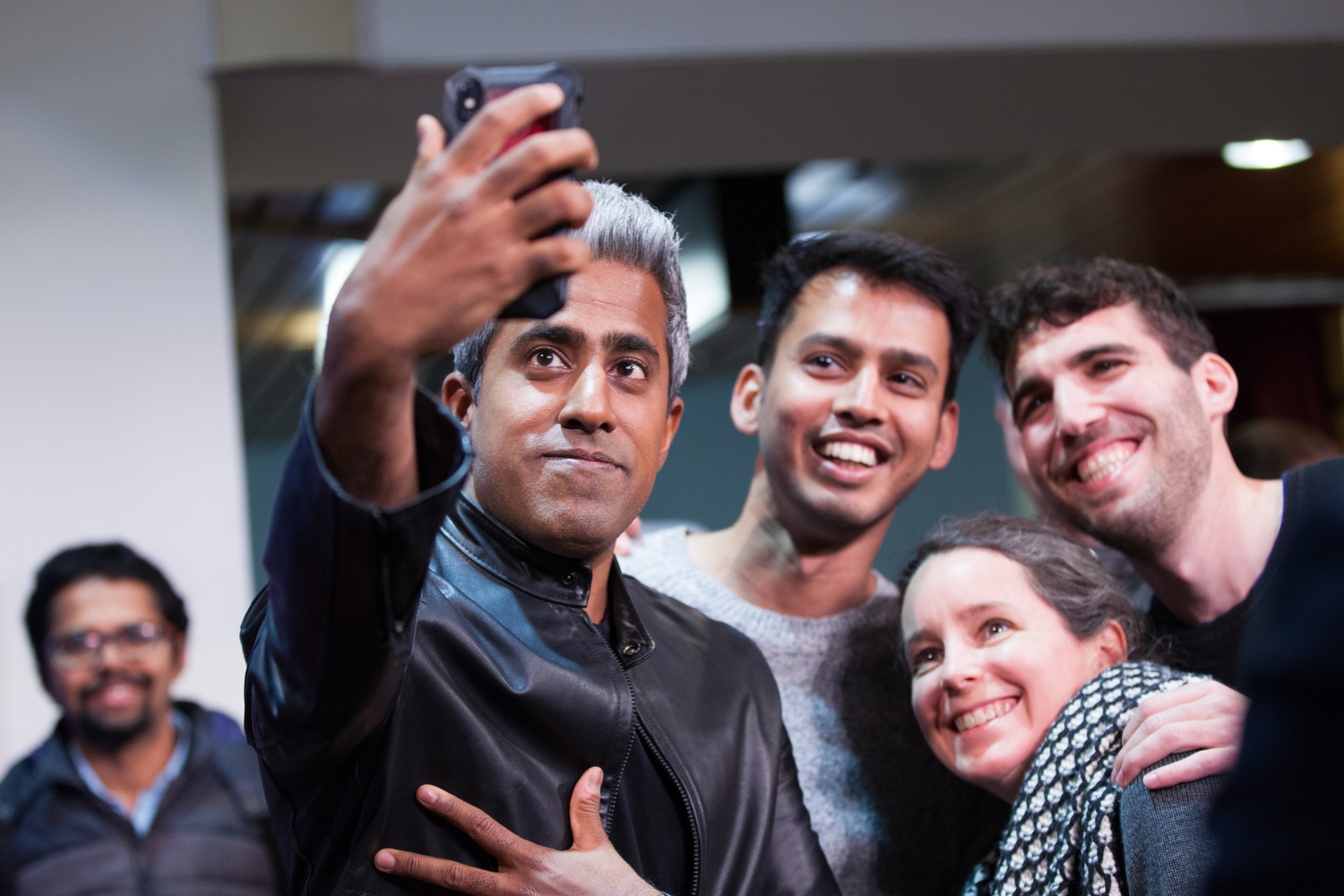 Anand Giridharadas, the author of Winners Take All, poses for a photo at the JFK Jr. Forum Tuesday night. By Kai R. McNamee
By Fiona K. Brennan and Nidhi Patel, Contributing Writers

Anand Giridharadas, author of the book 'Winners Take All,' criticized the notion that elite philanthropists can bring about reform in a talk at the Harvard Institute of Politics Tuesday.

Giridharadas said that these wealthy individuals claim to be solving societal problems by donating to charitable causes — but that they are really upholding the social and economic structures that are at the root of these problems. In addition to writing three books on politics in the United States and India, Giridharadas is an editor-at-large at TIME and a former columnist for the New York Times.

Giridharadas explained his view that the American people believe that business and entrepreneurship, rather than the “slothful” public sector, are the best ways to promote social change.

“We’re not getting transformational reform because we have outsourced the job of changing the world to the people with the most to lose from real change,” Giridharadas said.

Philanthropy allows the wealthy to “scrub” their tarnished reputations, according to Giridharadas. He also criticized universities like Harvard that accept donations from billionaires — some of whom he said have unethical backgrounds — and even put their names on buildings.

“Harvard has perfected this art and has perfected taking money and remaking the names of people who are scoundrels,” Giridharadas said in an interview immediately after the event Tuesday. “Harvard has allowed itself to become the world's most prestigious drive-through reputational laundromat.”

“There's some money you shouldn't take at all ever, no matter what. Hello, Jeffrey Epstein,” Giridharadas added.

University spokesperson Jonathan L. Swain declined to comment but pointed to recent comments made by administrators regarding the school’s donation policy.

In an interview last month, University Provost Alan M. Garber ’76 said that Harvard must have a “principled approach” when deciding whether or not to return gifts. Garber also said there “may well” be occasions when a gift should be returned, and administrators should be conscious of changing attitudes nationwide regarding certain donations. The University is currently conducting a review of billionaire donor and convicted sex offender Epstein’s donations to the University.

Ayesha P. Venkateshwaran, a student at the Harvard School of Public Health, said she found the talk both “difficult” and “important” to hear — particularly Giridharadas’ opinion that college students have not done enough to protest against this flawed system. Giridharadas said during the event that reform “begins with anybody who’s part of this institution.”

Harvard Kennedy School student Oriol S. Borras also said that Giridharadas raised important points. Still, he pointed out that these criticisms of philanthropy in a capitalist society are not new.

“I would say, like in some countries in Europe, we have parties that are saying what he was saying,” Barras said. “I think the fact that this is being said in the United States, and it's being said in a kind of conservative university as Harvard is, it’s like an innovative thing.”

At the conclusion of his talk, Giridharadas called upon the audience to advocate for a new age of reform through the public sector. He said he hopes the American people can come to speak to each other in “a public language, not a language of optimization and leverage and scale, but a language of public words, philosophical words about the common good.”