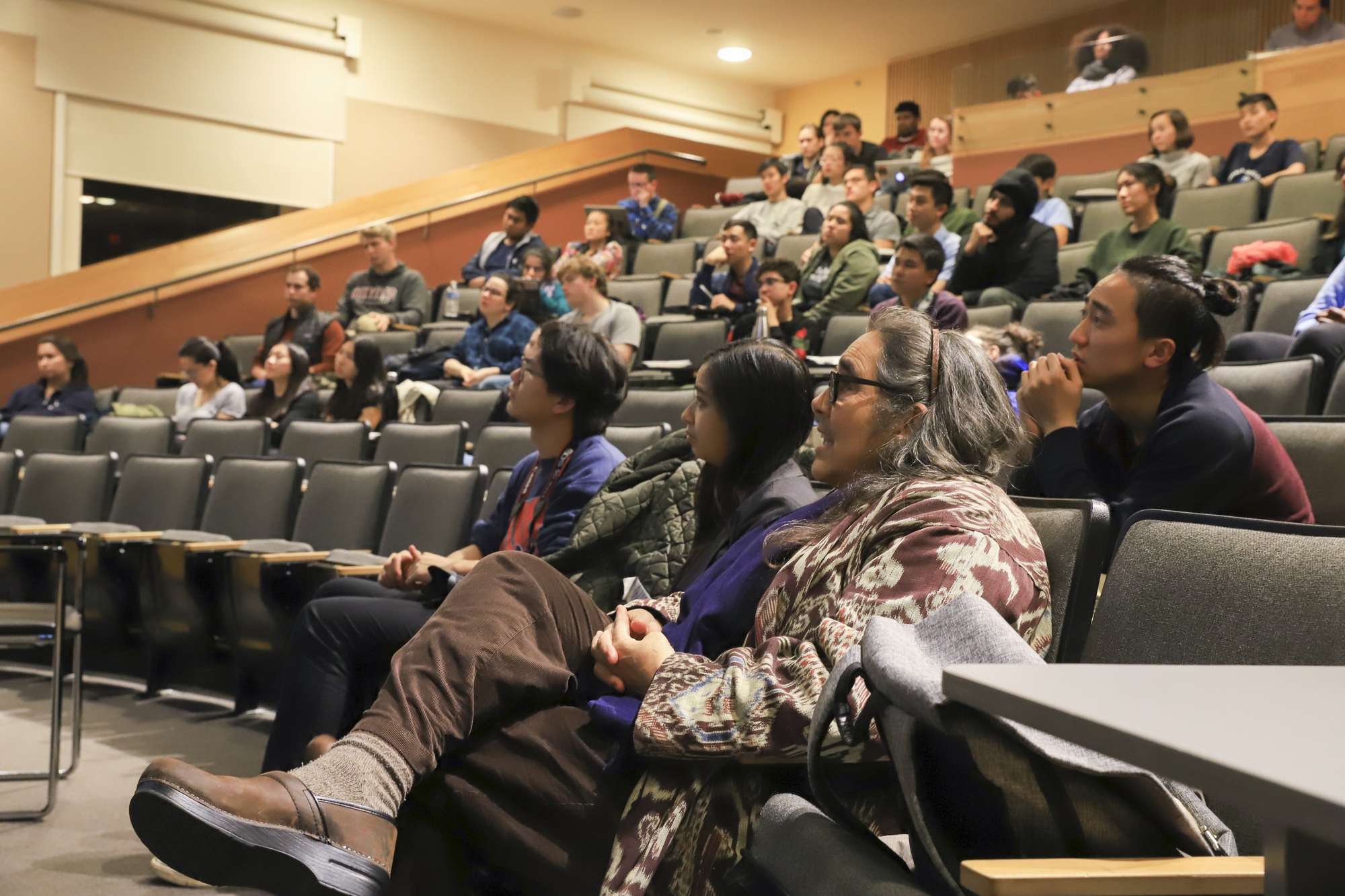 Members of the Harvard community attend a discussion on the Thirty Foot Telescope, which is proposed to be placed on Mauna Kea in Hawaii. The project is controversial due to its infringement on the use of indigenous land and potential ecological repercussions.
Advertisement
Advertisement

Five-thousand miles away, a video call beams from the Big Island of Hawaii into Boylston Hall. Tonight, a panel of Hawaiian academics is directing the audience’s attention toward a conversation that has captured the hearts of the people — the construction of the Thirty Meter Telescope on Mauna Kea.
By Kevin Tan

Five-thousand miles away, a video call beams from the Big Island of Hawaii into Boylston Hall. Tonight, a panel of Hawaiian academics is directing the audience’s attention toward a conversation that has captured the hearts of the people –– the construction of the Thirty Meter Telescope on Mauna Kea.

This event, hosted by the Task Force on Asian and Pacific American Studies and co-sponsored by the Student Astronomers at Harvard-Radcliffe and Native Americans at Harvard College, is packed with students from many different Harvard schools. The speakers are no less diverse, hailing from places across the globe: from Brown University to their homes in Hawaii. Throughout the night, they illuminate the situation through their conversation, presentations, and anecdotes.

Mauna Kea, a dormant volcano and the tallest peak in Hawaii, has long been a cornerstone of Indigenous Hawaiian culture and religion. All five of Hawaii’s mountains are sacred, but Mauna Kea is the most so –– its summit is believed to be the region of the gods, and in ancient times, laws restricted anyone but high-ranking ali’i, members of the royal family, from visiting it. However, several characteristics of this sacred landscape –– the altitude, exceptionally clear weather, and isolation from urban developments –– have transformed the mountain into a popular site for astronomy and, more imminently, the proposed site of the TMT.

The TMT will be the first of its kind, consisting of a single-mirror system that will have unparalleled light gathering power. Given the increased clarity of the data that can be collected from this telescope system, it is projected to open up new areas of astronomical inquiry.

“It'll be a revolution,” says Rodrigo E. Cordova ’19, the former president of the Student Astronomers at Harvard-Radcliffe. “If it ever gets built, it'll be a new scale of resolution that astronomy just has never had before. And what you can do with that is you can see the smallest of galaxies… the TMT is big enough that we will probably have the first ever images of exoplanets.”

Such telescopes are not newcomers to the Hawaiian Islands. Over the past few decades, thirteen telescopes have been situated on this mountain, developments which have disrupted the ecosystem and landscape of Mauna Kea. In the past, reports of mercury leaks from the facilities and the disposal of untreated sewage from such sites have raised concerns as to the safety of the Mauna Kea aquifers. In response to these criticisms, Dan Meisenzahl, a spokesperson for the University of Hawai’i, wrote in an email, “The University of Hawaiʻi has acknowledged and apologized for the shortcomings of its management of Maunakea in the last century. The great advances in UH’s management of Maunakea since the 1998 state audit are well documented in subsequent independent audits.”

But with the development of the Thirty Meter Telescope, the stakes have changed.

“The scope of the telescope is so much bigger,'' says Makana Kushi, the Program Assistant and Coordinator for Native American and Indigenous Studies at Brown University. Being the largest construction project on the Mauna Kea peak, Kushi predicts that the impact on the structural integrity and ecology of the mountain will be far more drastic. But Meisenzahl claims that the TMT will actually lessen the impact environmental impact of telescopes on Mauna Kea. He wrote in an email that “Five of the 13 telescopes on Maunakea will be decommissioned before TMT is operational and the sites will be restored to their original state.”

“The fact is that people are galvanized by this movement and are starting to have this cultural and political awakening,” Kushi says.

Several of the event’s speakers have been part of this awakening. Kuʻulei Perreira-Keawekane, a Native Hawaiian activist and educator, is one of the people who appears via Skype. She has been involved in defending Mauna Kea and shows the audience the contents of her “raid bag” that she carried on the mountain: first aid supplies, a photo of the mountain, and a dust mask and goggles to mitigate the effects of tear gas.

Protests against the construction of the TMT have taken root in the past few years, drawing in native Hawaiians and other allies in a fight for Indigenous lands and recognition from the government. Kushi believes that people are starting to realize that the protests are about more than just Mauna Kea. ”It's a matter of Hawaiians having a say over what happens on our homelands,” she says.

“People will not accept its industrial scale. The kind of destruction that happened just to build the smaller telescopes was painful for Hawaiians to see,” says Mary Tuti Baker, a postdoctoral Fellow at Brown University in indigenous and environmental political theory.

Even though many are opposed to the TMT’s construction, however, the speakers emphasized that this opposition is not anti-science. Jocelyn L. Doane, the public policy manager at the Office of Hawaiian Affairs, says that the narrative should not be centered around a battle between Indigenous religions and modern science, as it is commonly depicted in the media. She believes that the controversy surrounding Mauna Kea is not a zero-sum game; both parties are important and can benefit from each other.

“We have many Hawaiian scientists. We’re absolutely pro-scientists, pro-science,” Doane says. “Pure science is not bad, but we really have to be more open to weighing what would be damaged, what would be lost.”

As the protests at Mauna Kea persist, the conversation around respect for Indigenous cultures and the sciences will continue as well. And for Perreira-Keawekane, this hope for the future is what keeps her going in her activism.