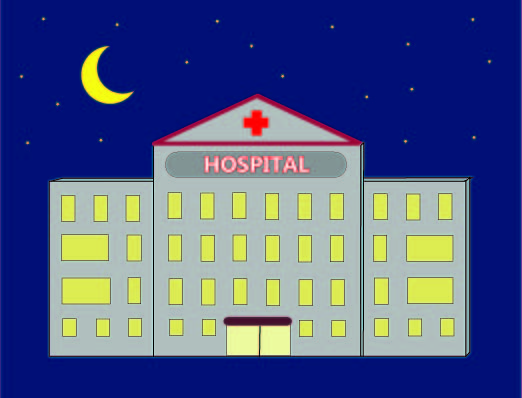 The Rising Cost of Nighttime Care

In order to avoid another significant bill, Jordan opted to Uber off-campus to Mount Auburn Hospital, accompanied by her roommate. She received a taxi voucher from UHS for her trip back to campus, but when it failed to summon a taxi for “three to four hours,” she ended up returning to campus around 7 a.m. with HUPD.
By Roey L. Leonardi and Jane Z. Li

When Alexa C. Jordan ’22 bit into a Clif Bar in November of her freshman year, she didn’t realize how much that bite would cost.

Jordan has an allergy to nuts, and the cashews in the bar soon sent her into anaphylactic shock. She called for an ambulance and was transported to the hospital around 11 a.m., returning to campus around 6 p.m. after being treated. The ambulance bill was $1,300, and she says she is still “dealing with” that expense nearly a year later.

At 2 a.m. the following night, Jordan woke up “not able to breathe,” and called Harvard University Health Services for assistance. She was diverted from Urgent Care and directed to the hospital instead, with instructions to call an ambulance for transport.

In order to avoid another significant bill, Jordan opted to Uber off-campus to Mount Auburn Hospital, accompanied by her roommate. She received a taxi voucher from UHS for her trip back to campus, but when it failed to summon a taxi for “three to four hours,” she ended up returning to campus around 7 a.m. with HUPD.

So the total cost of that bite? In addition to $1,300 in ambulance fees, it cost several hours of waiting and a “traumatic, horrible” experience that follows Jordan to this day.

In June, HUHS Urgent Care stopped admitting patients between the hours of 10 p.m. and 8 a.m. By Yuen Ting Chow

After June 17, 2019, HUHS Urgent Care stopped admitting patients between the hours of 10 p.m. and 8 a.m., instead providing an urgent care line that connects to a tele-nurse for over-the-phone counseling. If students require immediate care within those ten hours, they must seek out a local hospital instead. This has exacerbated issues with transportation costs to off-campus medical facilities that students like Jordan had experienced even before the switch.

In an April Crimson article, Senior Director of Nursing and Health Promotion Maria Francesconi said the change was made to help streamline the emergency care process, eliminating the interim period of waiting between arriving at Urgent Care and being transported to the hospital. Figures from February 2019 show that the number of students who make use of the overnight urgent care system is low: Of the 227 calls to overnight urgent care that month, only 15 people arrived at HUHS in person, and six of those were transported to the hospital.

In an emailed statement, Michael Perry, a spokesperson for HUHS, wrote, “Callers to the nurse advice line between 10pm and 8am receive the highest level of care and medical advice in an easily accessible way. Many callers save time by preventing the unnecessary step of visiting in-person urgent care only to be transferred to an emergency room.”

The changes, however, have still been met with backlash from students.

“I think the general tone of conversation is that students feel like some avenue in which they can seek healthcare has been restricted or taken away completely,” says Jenny Y. Gan ’22, an Undergraduate Council representative. Jordan, who is also a UC representative, has heard similar concerns from other students.

“I sent out a survey to the Adams House mailing list to try [to] get general feedback at the beginning of the school year, and [policy change] was actually one of the main complaints,” Jordan says.

Although Jordan had the option to seek UHS assistance last year when she woke up in the middle of the night, unable to breathe, there would be no hope for such assistance now. Her options would have been another ambulance charge upwards of $1,000, or the alternative she decided to take — seeking help on her own.

In light of her own experience and those of fellow students, Jordan — along with UC representative M. Thorwald “Thor” Larson ’21 — has sponsored a new UC bill that funds “non-emergency medical transportation” for students who use Uber, Lyft, or other ride-sharing services to receive off-campus medical care.

Ethan M. Schultz ’21 was one of the first students to directly benefit from this new policy. Three weeks ago, he sprained his ankle while running near the law school campus around 10 p.m. and was faced with two options: pay thousands of dollars for an ambulance ride, or hop on one foot to Mt. Auburn. “It was after hours, so there were less options available,” Schultz says, “so I just called an Uber.”

This third method of transportation has become increasingly popular among students seeking care after HUHS closes its doors. Schultz claims some of his friends have been in similar situations, and admits that while Ubering to the hospital feels “kind of pathetic… it’s just what you have to do.”

Schultz recalls the story of a friend who “was in severe danger and needed to be taken care of.” Although she could barely speak, she managed to voice her inability to pay for an ambulance bill. “It was kind of heartbreaking,” Schultz says, adding, “When you’re in severe danger you shouldn’t need to think about paying for your ride to the hospital.”

Following his own late-night Uber ride to Mt. Auburn, Schultz provided Larson with his transportation receipts and some basic information, and he was reimbursed in full. “It was the easiest thing,” he says.

The UC bill will also help students who aren’t seeking after-hours care: Students can be reimbursed for visits to off-campus mental health appointments, physical therapy, and other forms of care. This is especially important, Jordan says, because “CAMHS is lacking right now in staffing, so they’re having to send students out into the community.” These journeys can prove time-consuming and costly, and the possibility of reimbursement alleviates some of the financial burden placed on students unable to receive on-campus counseling.

Sending students into the community for counseling, however, is standard practice due to the nature of CAMHS. According to Dr. Barbara Lewis, Chief of CAMHS, “While CAMHS is designed to provide students with short-term therapy, there are students who are seen for a longer period of time. For those students who seek regular, long-term therapy, CAMHS maintains strong relationships with providers in the community, and through our Community Referral Coordinator (CRC), we will assist students to find an outside provider that best fits their needs.”

As for this new system’s adequacy in addressing concerns raised by the lack of overnight care, Jordan maintains that the UC is doing all they can to “ensure that there’s a minimal detriment placed on students.” Gan hopes the new transportation reimbursement program will help illuminate other areas of campus medical care that can be improved. A survey enabling students to apply for the program appeared in the Nov. 6 UC Weekly newsletter, which contains a section for feedback, allowing students to “leave any comments or personal stories.” She hopes to use this feedback in presentations to HUHS administrators, “who can hopefully take that into consideration when they're thinking about the future of emergency care.”