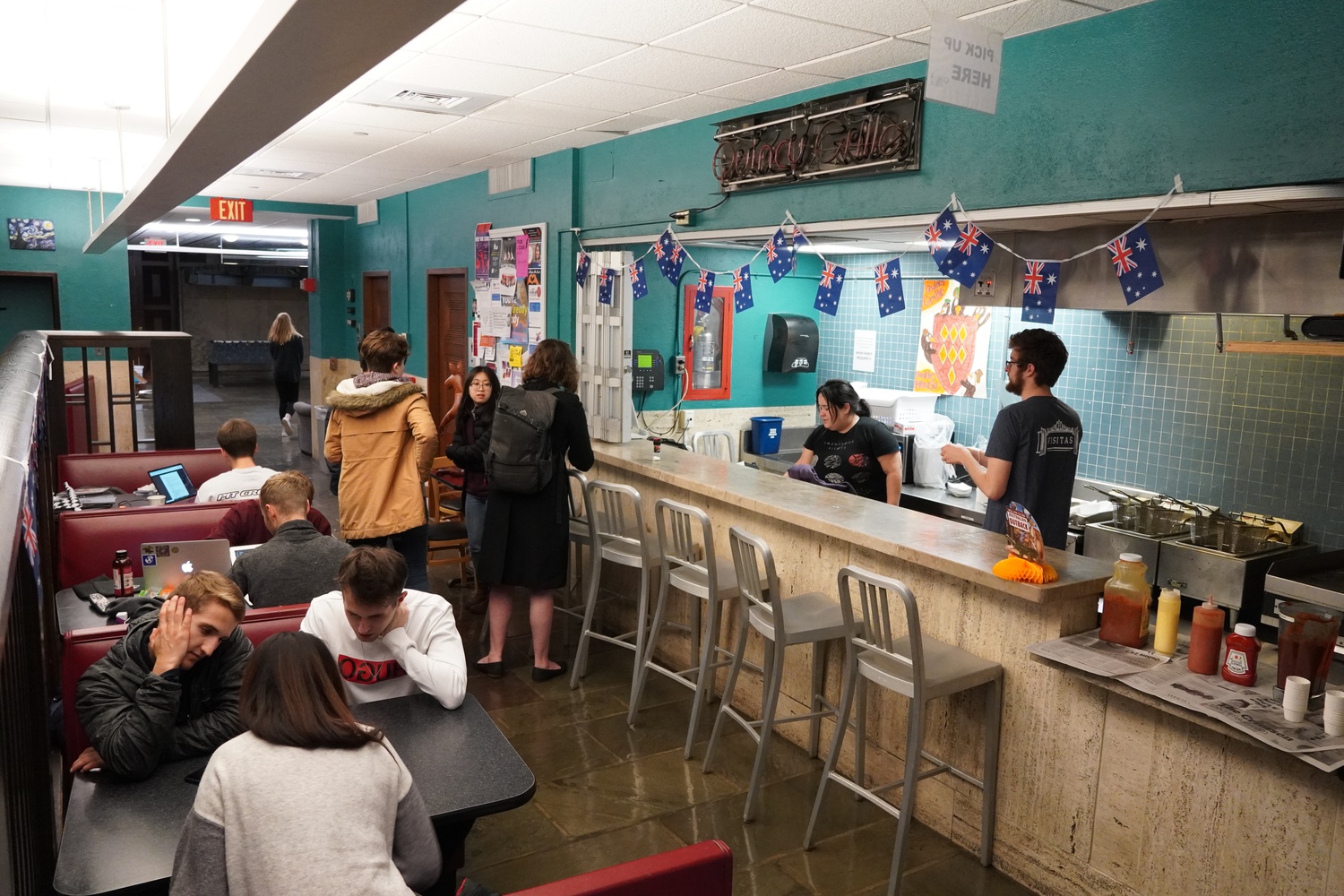 The College Events Board has been hosting events for the upcoming 136th Harvard-Yale Game, including a Grille Crawl, in which students are encouraged to visit all the student grilles on campus. By Pei Chao Zhuo
By Jessica Lee, Contributing Writer

Munching on donuts and facing off on arcade machines, students partook in daily Harvard-Yale Spirit Week events this week in anticipation of the 136th Harvard-Yale Football Game Friday.

Spirit Week is an annual tradition organized by the Crimson Traditions Committee of the College Events Board intended to generate school pride and get undergraduates excited for the upcoming Game, according to CEB member Emily G. Lopez ’21.

Each year, the CEB chooses a theme to center Spirit Week around and plans five daily events preceding the Game. This year, the committee decided on “Road to Victory” as a theme to bring out Harvard students’ competitive spirit as they journey to Yale, Lopez said. The group used competitive race car driving as a recurring symbol of the theme.

“We chose Dave & Buster’s because, first of all, it’s just really, really fun. And it also gets that competitive side of people out because there’s like a bunch of sports games there and like competing games,” said Lopez.

The committee also created a new event called “Ride or DIY” where students could make their own apparel to represent school spirit at the Game. CEB provided bandanas, fanny packs, bracelet making supplies, and decals for students to decorate their own clothes.

“This was very different from anything we had ever done before, as we tried to create more Harvard gear for students because we understand like going to the Coop is super expensive,” said Lopez.

According to Lopez, as of Wednesday, the event with the biggest turnout was “Stay in Your Lane Yale,” an annual tradition featuring Organismic and Evolutionary Biology lecturer Andrew J. Berry performing a roast of Yale.

Held in the Smith Campus Center, the event brought together many students who ate snacks as they listened to an opening stand-up comedy act by Tom L. Osborn ’20, saw the premiere of on-campus comedy group On Harvard Time’s “The Game” video, and watched Berry’s act, which was accompanied by a slideshow presentation.

“What do all Harvard and Yale students have in common? They all got into Yale,” Berry said, reading off of a projected image of a T-shirt in his closing remarks.

Some students who attended the event — including Berry’s students — said they enjoyed the lecturer’s jabs at Yale.

“I have a gen-ed class with Andrew Berry and he’s like one of the funniest people I know,” Elijah B. McGill ’23 said. “I thought [his jokes] were quite on point for his character, and I thought that they were quite funny. Lots of good ammunition, I guess, for any Yale person you meet.”

Overall, Lopez said she is happy with the turnout at CEB’s events throughout the week.

“We love seeing anyone and all people come,” she said. “We really want to focus on spirit and hyping up Harvard and the Game.”