For better or worse, the Harvard team that will step onto the hardwood this week in its first matchup of the 2019-2020 season does not share much in common with last year’s team.
By Ema R. Schumer 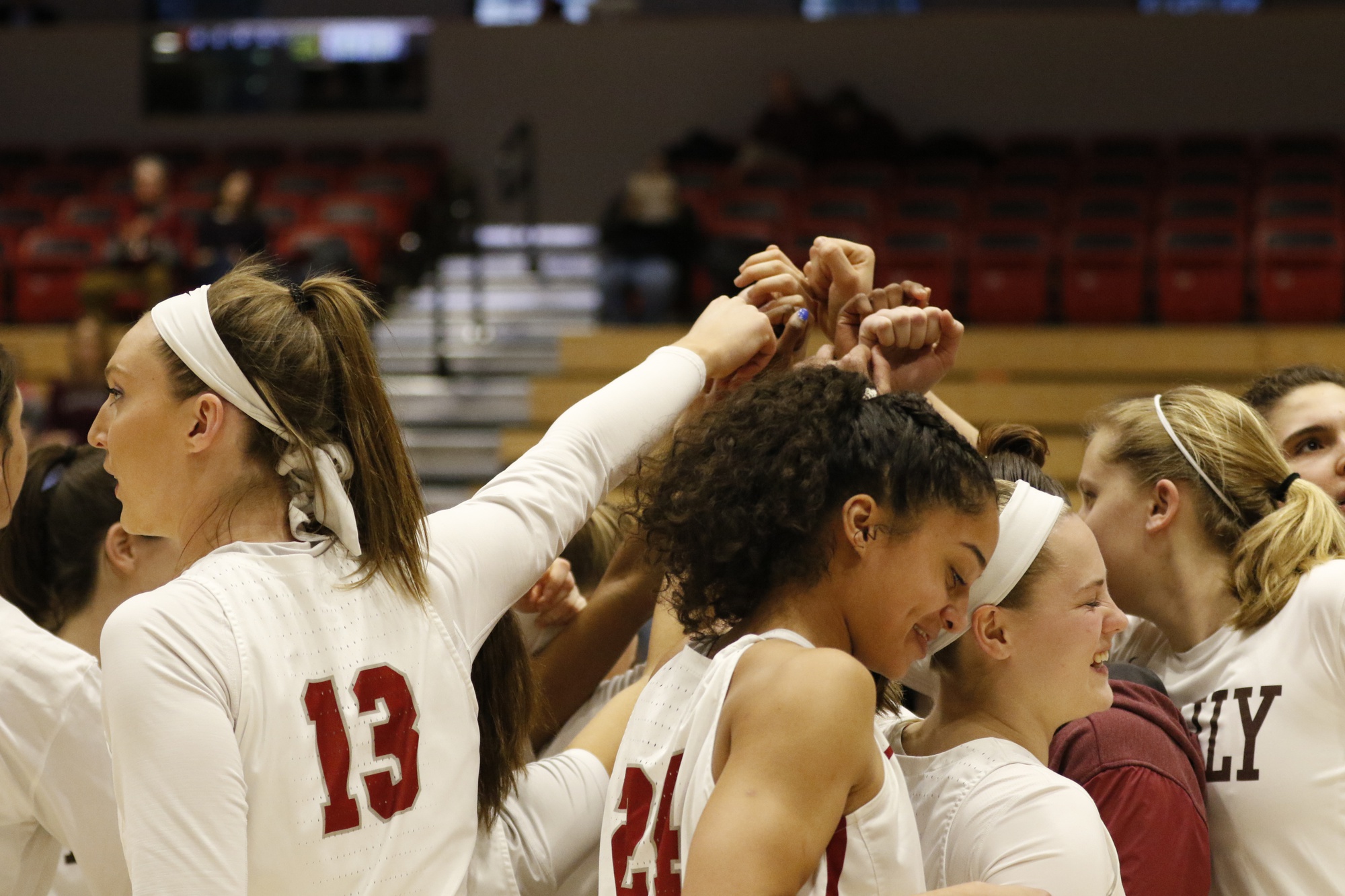 The Crimson will put out a young side this season as it seeks to avenge last season's loss to Penn in the Ivy playoff semifinals. By Timothy R. O'Meara

Although last season ended in heartbreaking fashion for Harvard, this season will offer the team a fresh start.

The team’s competitive play throughout the season, which garnered the squad third place in the league, was belied by a nearly thirty-point loss to Ancient Eight rival Penn in the semifinals of the Ivy League Tournament last March.

At the time, coach Kathy Delaney-Smith described the game as “probably one of the most disappointing games I can remember in the past 37 years.”

Indeed, the rout came as a shock to Delaney-Smith and her team. During the regular season, the Crimson and the Quakers proved even match-ups. Their first contest resulted in a double overtime victory for Harvard at Lavietes Pavilion. At the Palestra in Philadelphia, Penn surmounted the Crimson in overtime.

But with a new season comes a blank slate.

“It's behind me. Once it's over, it's over and we move forward,” Delaney-Smith said.

Though the Quakers and Princeton are perennial conference power houses and defending co-champions, Delaney-Smith emphasized the importance of every league game in a conference that is often highly competitive from the first seed to the eighth. 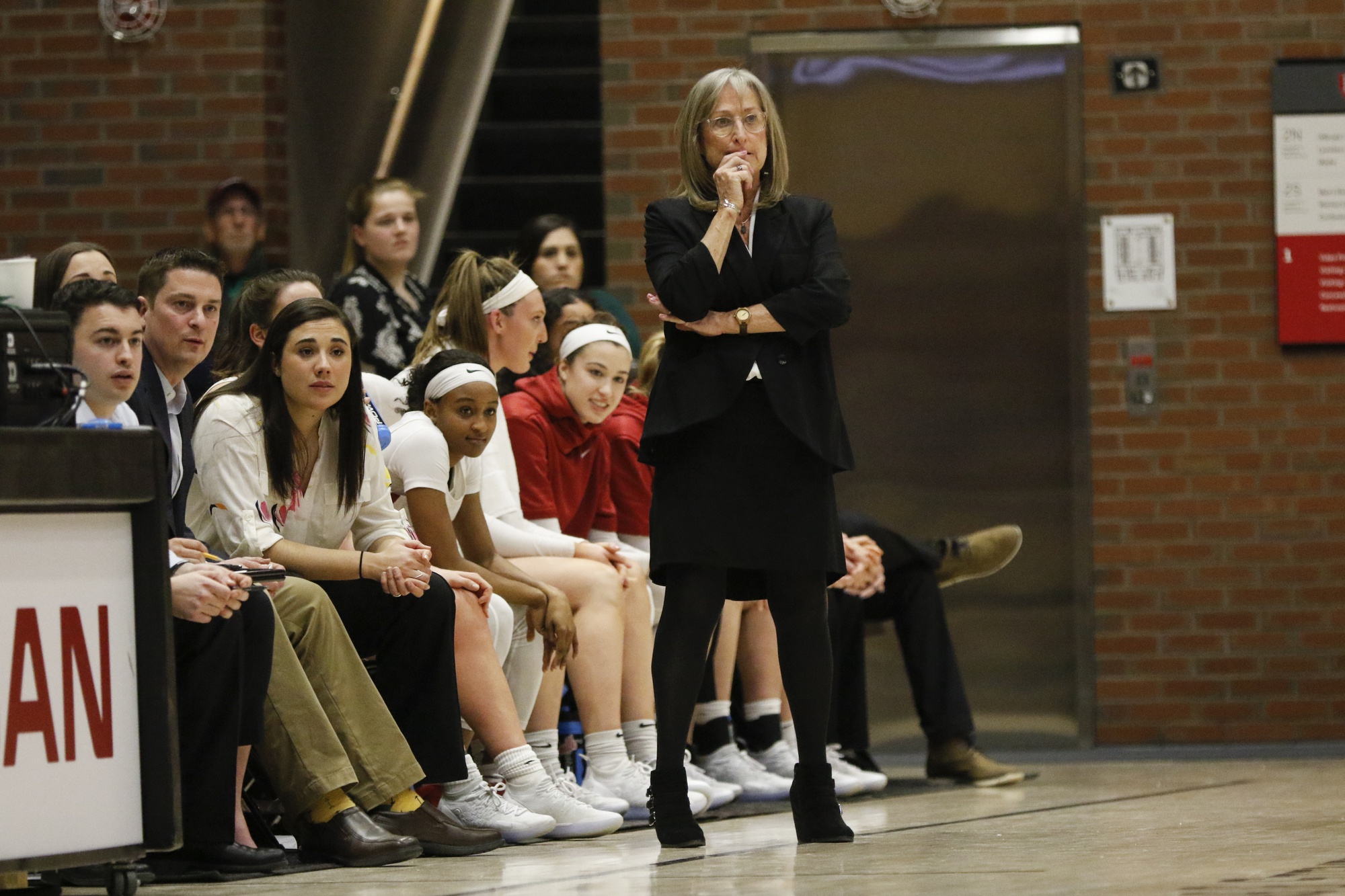 Coach Kathy Delaney-Smith will lead the Crimson for her 38th season. By Timothy R. O'Meara

For better or worse, the Harvard team that will step onto the hardwood this week in its first matchup of the 2019-2020 season does not share much in common with last year’s team.

Indeed, three out of the four top scorers from last season — all guards — will not return to the Crimson this year. They include graduates and co-captains Sydney Skinner ‘19 and 1000-point scorer Madeline Raster ‘19.

Conspicuously absent from this season’s roster is senior point guard Katie Benzan. The Wellesley, Mass. native, who led Harvard in points and assists for the past three consecutive seasons, announced that she will forgo her senior year season with the Crimson to maintain eligibility to play a post-grad year for the University of Texas at Austin.

“I'm sorry that was a choice Katie made, but she feels it's the best thing for her and we're moving forward pretty nicely,” Delaney-Smith commented.

Much of Delaney-Smith’s optimism stems from a precocious and talented freshman class of guards.

“I think [Benzan] was a prolific scorer and a tremendous shooter, but our freshman class is loaded,” Delaney-Smith said. “This may be one of the strongest freshman classes I've ever had. I couldn't be more pleased with their work ethic and their ability to learn the system.”

Delaney-Smith described Stritzel, a 5-10 guard who is the all-time leading scorer for her high school Nazareth Academy in Chicago, as “a bull in a china shop.”

“She just finds a way to get things done and you don’t even know how,” she said. “You look at the stat sheet and she’s leading everybody in all of the stats.”

“She may be the best shooter to ever play here if she continues the way she's going right now,” Delaney-Smith offered.

Other first year guards who will contribute to Harvard’s team include Gabby Donaldson, a Raleigh, North Carolina native who scored 1000 points in high school.

First-year 5-9 guard Sara Park, who shattered records at her high school in McLean, Va., will bring her talents to the Crimson this season. At The Potomac School, Park set all-time program highs in career points, triples, and points in a single game.

A torn ACL will sideline first year guard Gracie Martin. The 6-1 guard, who hails from Biddeford, Maine, was named to the McDonald’s All-Academic Team and All-Star Team in 2018-19.

The newest addition to the roster is 5-11 guard Naomi-Grace Jennings, who walked onto Harvard’s team this season.

The talented first-years will support the performances of returning players, who will take on larger roles this season. Junior forward Jadyn Bush, who led the Crimson in rebounds last season, will likely suit up in the starting lineup for Harvard once again. The Federal Way, Wash. native averaged 8.5 boards per game last season and led the returning class in scoring with 10.9 points per game.

The junior will be flanked in the post with senior forward Jeannie Boehm, who averaged close to 30 minutes per game last season. In her penultimate season, Boehm contributed 8.2 points and 7.3 rebounds per game. 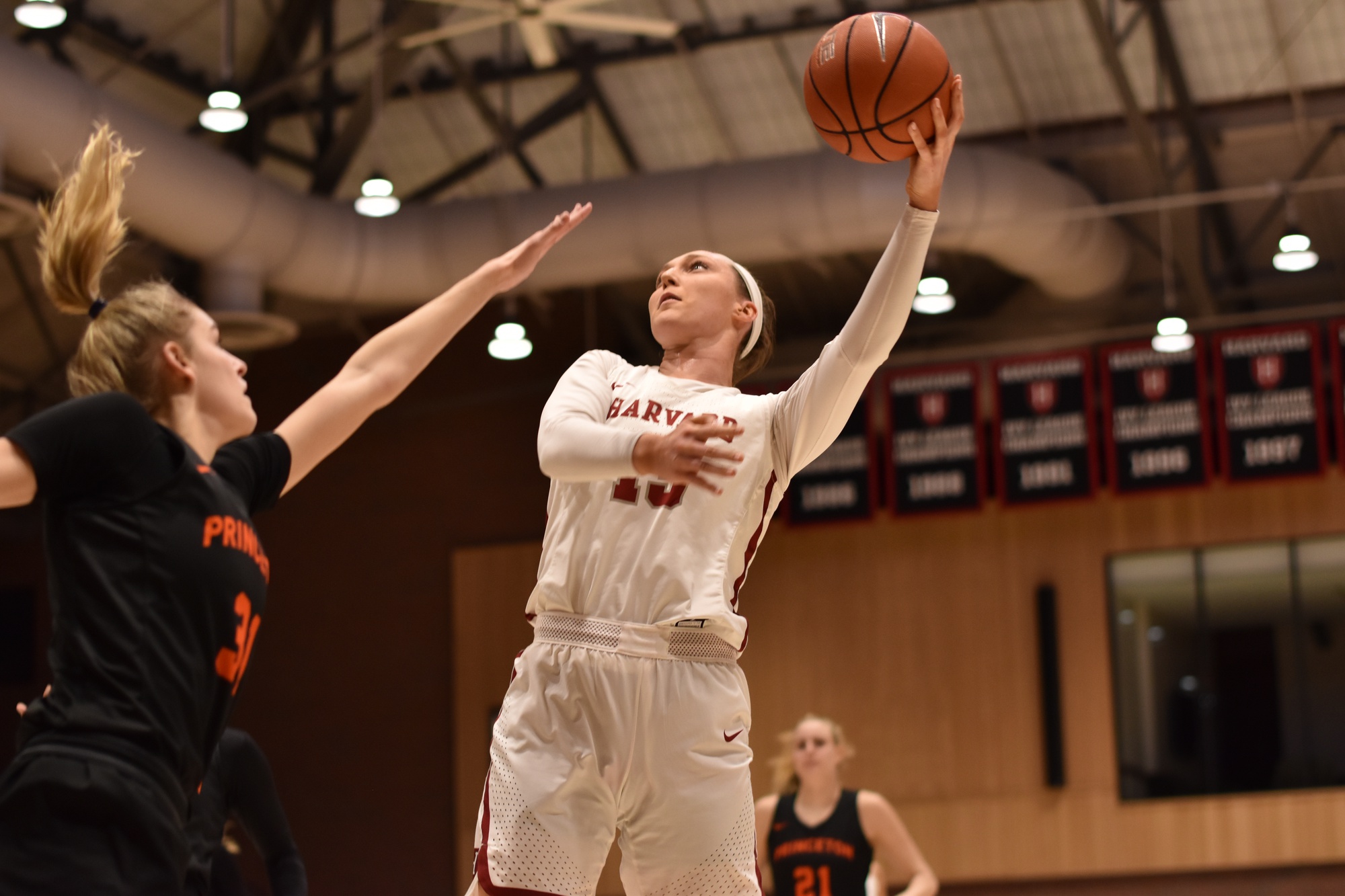 Senior forward Jeannie Boehm will assume a leadership position this year with the team, By Quinn G. Perini

In addition to being an offensive threat, the forward sees her role this season in a leadership capacity through supporting younger players.

“Something I'm looking for from a leadership perspective is [using] my experience and seniority to help us win and [to] do whatever I can to help us win,” she said.

Delaney-Smith also expects sophomore guard Maggie McCarthy and sophomore forward Tess Sussman to offer larger contributions to the team this season. The duo each averaged under ten minutes of playing time per game last season but will both start for Harvard this season, according to Delaney-Smith. 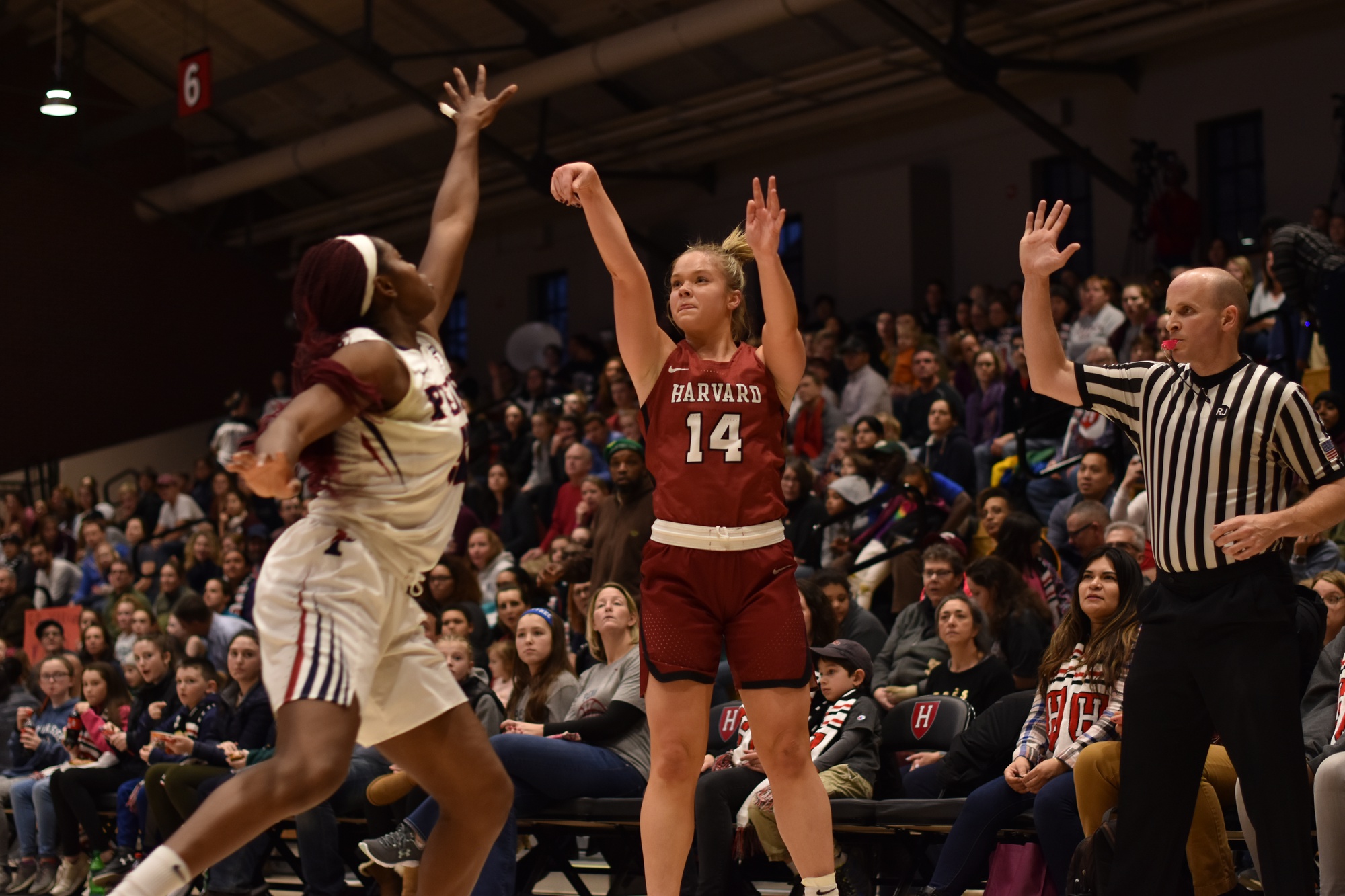 Mackenzie Barta will serve as a co-captain for this team, alongside junior forward Rachel Levy. By Quinn G. Perini

The winningest coach in the Ivy League noted that her team’s inexperience was its greatest liability.

“We have plenty of scorers,” she said. “What we lack is experience. It remains to be seen whether that hurts us or not.”

The Crimson’s first test will take place in the Midwest on Tuesday in a 11 a.m. eastern-time tip off against the Northern Illinois Huskies, who play in the Mid-American Conference.

Delaney-Smith suggested that the Harvard squad may appear a “little behind” in its first contest of the season due to off-season surgeries and preseason injuries. Nonetheless, she said she felt “optimistic” and maintained that “we have the ability to win.”

The Crimson will make it back to Cambridge to host University of California, Berkeley — who Harvard topped 85-79 last season — in a Friday night showdown that tips off at 7 p.m.