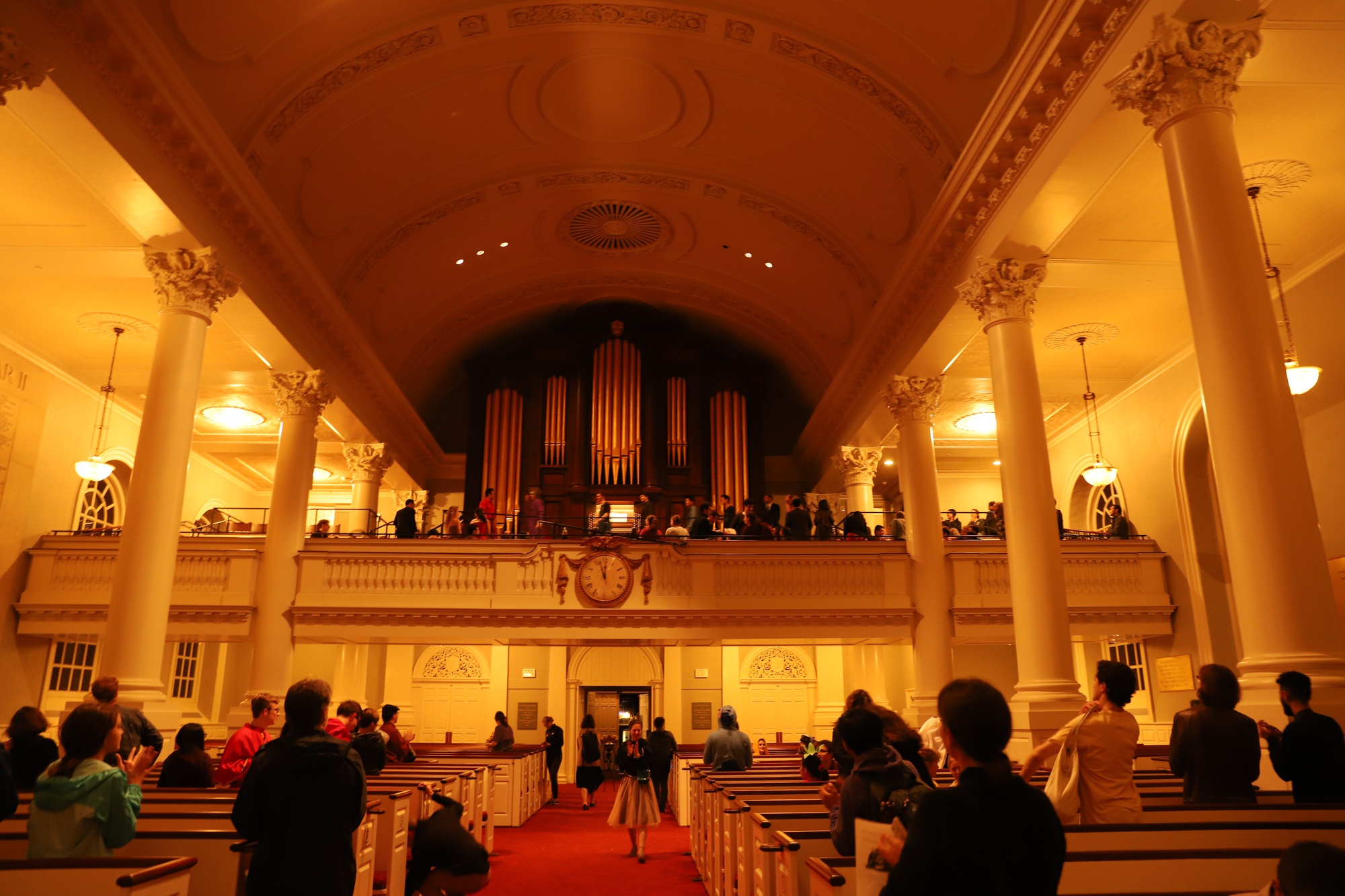 On the night of Oct. 31, the First-Year Experience Office, Memorial Church, and the Harvard Organ Society hosted their annual Halloween Organ Recital. At 11pm, the sanctuary went silent with a single chord.
Advertisement
Advertisement

While the Society’s students are often found on the organ bench practicing or performing, their Harvard peers don’t usually frequent the audience on the ground floor. However, once a year, the annual Halloween recital draws an eclectic crowd of costumed students.
By Tzofiya M. Bookstein

A grinning joker scrambles up the staircase. A strawberry, a Christmas tree, and a soccer player find their seats in the pews of Memorial Church. With a single chord, played at precisely 11 p.m., the sanctuary grows silent. The show begins, and a student, one of a rotating cast of members of the Harvard Organ Society, starts playing an enormous collection of metal pipes encased in wood: one of Harvard’s three enormous organs.

Tonight is the Harvard Organ Society’s Halloween concert. They normally play for a different crowd at a much more reasonable hour.

Earlier that day, I had watched as an older crowd shuffled into Adolphus Busch Hall. Together, we waited expectantly for an unseen performer. As the multilayered organ music suddenly filled the hall, I was struck by the power of a single instrument to produce such a range of sound of such incredible depth. The movement in the hall ceased and the rows of audience members grew as motionless as the Renaissance statues surrounding us.

“It's a really wonderful break in the day, to hear it and to be in this space,” says Kate Judd, an older woman sitting next to me. She lives in Cambridge and often frequents these lunchtime recitals. The event is one of the Harvard Organ Society’s weekly midday performances that features student performers or visiting musicians. While the Society’s students are often found on the organ bench practicing or performing, their Harvard peers don’t usually frequent the audience on the ground floor. However, once a year, the annual Halloween recital draws an eclectic crowd of costumed students.

The lights are dimmed and green. Pixelated projections of ghosts swoop around Appleton Chapel. Two students dressed in red monk’s robes stand out among a larger costumed group from Boston College.

One of the monks explains that he is passionate about sacred music’s “beautiful way of moving like the soul.” He trekked to Cambridge solely for this concert, and pulled his friends along with him. Other undergraduates say that they came to support their organ-playing friends.

“This is my third year coming in around,” Ethan S. Whang ‘21 tells me matter-of-factly. “I'm going to make it a fourth next year.”

While the lunchtime audience, per instruction, held their applause until the end of the recital, this late-night crowd claps after every performance, and student-listeners shout gleefully as their friends’ take their seat on the bench to perform. At the Organ Society’s earlier event, in their regular venue, the performer plays from a balcony above the crowd, hidden. But, in Memorial Church’s Sanctuary, the audience sees each organist’s fingers fly energetically across the keyboard. They engage their whole bodies, twisting themselves to compress the pedals. Large metallic columns dwarf the frame of each performer. The instrument is a behemoth, an alien combination of a few pianos and an oversized typewriter.

Paul H. Georgoulis ’21, a junior who played Bach’s “‘Little Fugue in G Minor” for the audience, tells me that he is dressed as a sexy gorilla-cowgirl. Georgoulis is a pianist by training, but after finding that the pianos on campus were overplayed and overbooked, he changed keys and shifted to the organ.

“There were three world class instruments here on campus that I could practically just walk in and practice on whenever I wanted to,” Georgoulis says.

The opportunity was too good to pass up. Learning the new instrument also drew him into a larger community of organ players and enthusiasts. While the society has had fluctuating membership sizes over the years, Georgoulis speaks positively of the role of the Society.

“Organ is of course a pretty solitary instrument,” he says. “So the only time we really see each other is in club meetings and that kind of thing, but it's a nice community of organists, that all like to love and support each other and get together every once in a while and play for each other like recitals like tonight.”

The Halloween event is the society’s biggest event of the year. Members play a program of spooky music that the audience members will enjoy and perhaps recognize.

While the dramatic organ music might be considered stereotypical for the season, Georgoulis defends the set for the beloved event: “It's a bit of a cliche, but like, it's cliche for a reason,” he says. “It's fun.” Georgoulis hopes that this event will change people’s minds about the organ, an instrument normally associated with churches and choirs.

“It's a lot more fun and a lot more wild than you would expect. You can really like, let it rip on that instrument,” he says enthusiastically. The students here dressed in costumes, irreverently tearing open candy wrappers in the middle of the performance and excitedly cheering after every song, certainly seem to see ー and enjoy ー the organ’s wild side.