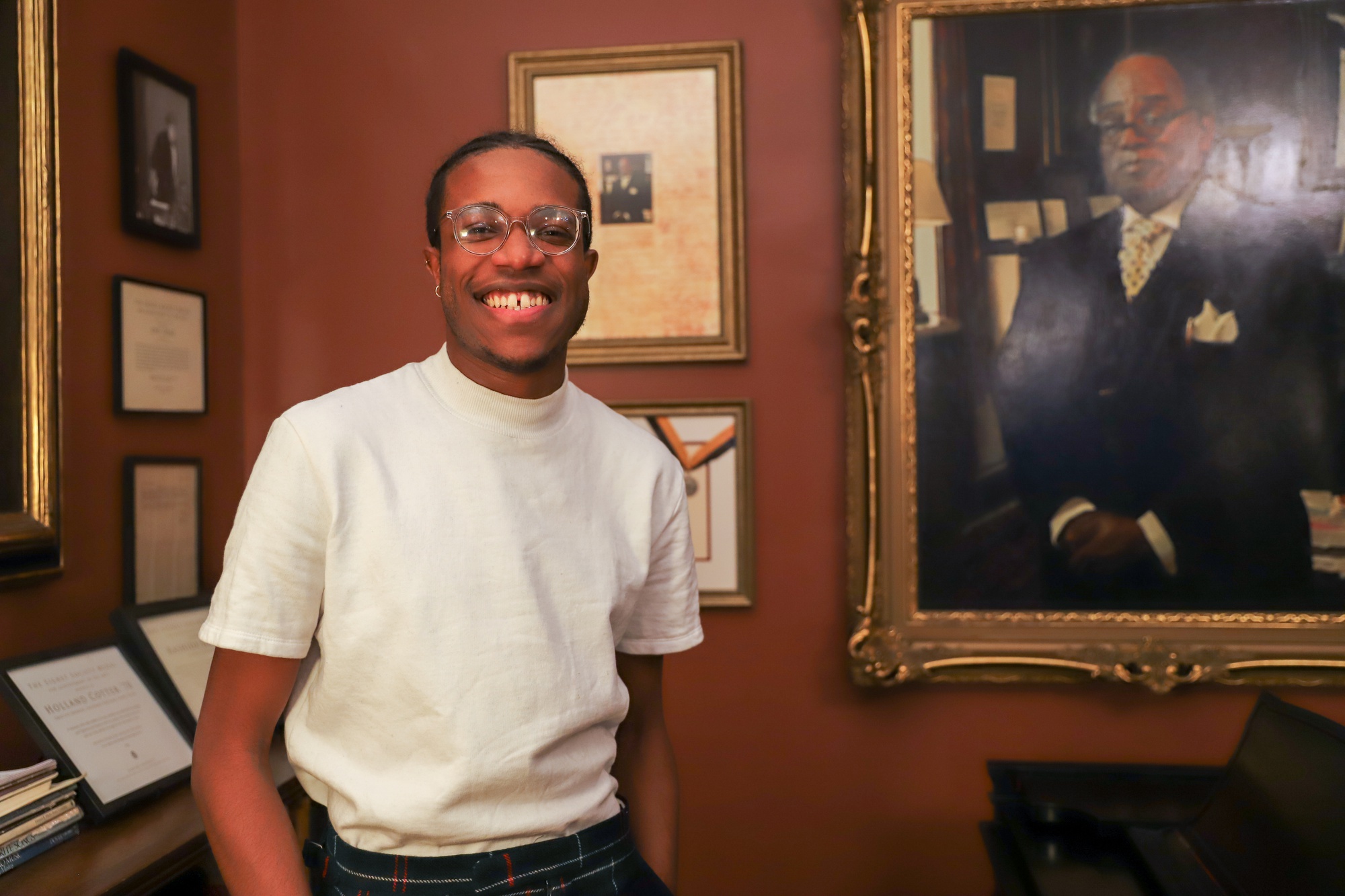 The first house Cahleb T. Derry ’20 lived in had two stories, a wide green lawn, and a baby grand piano. Derry was born in Rockland, N.Y., to Hope Daley, who planned events for Columbia Law School, and Craig Derry, who taught people how to sing.

Derry is wearing a red and emerald Ralph Lauren coat when I meet him. He has chosen a gray stairwell in Winthrop House for our interview. This is his favorite place on campus, though not for its aesthetics — he tells me that the stairwell has excellent acoustics. Derry lives just above, and this is where he comes to sing. 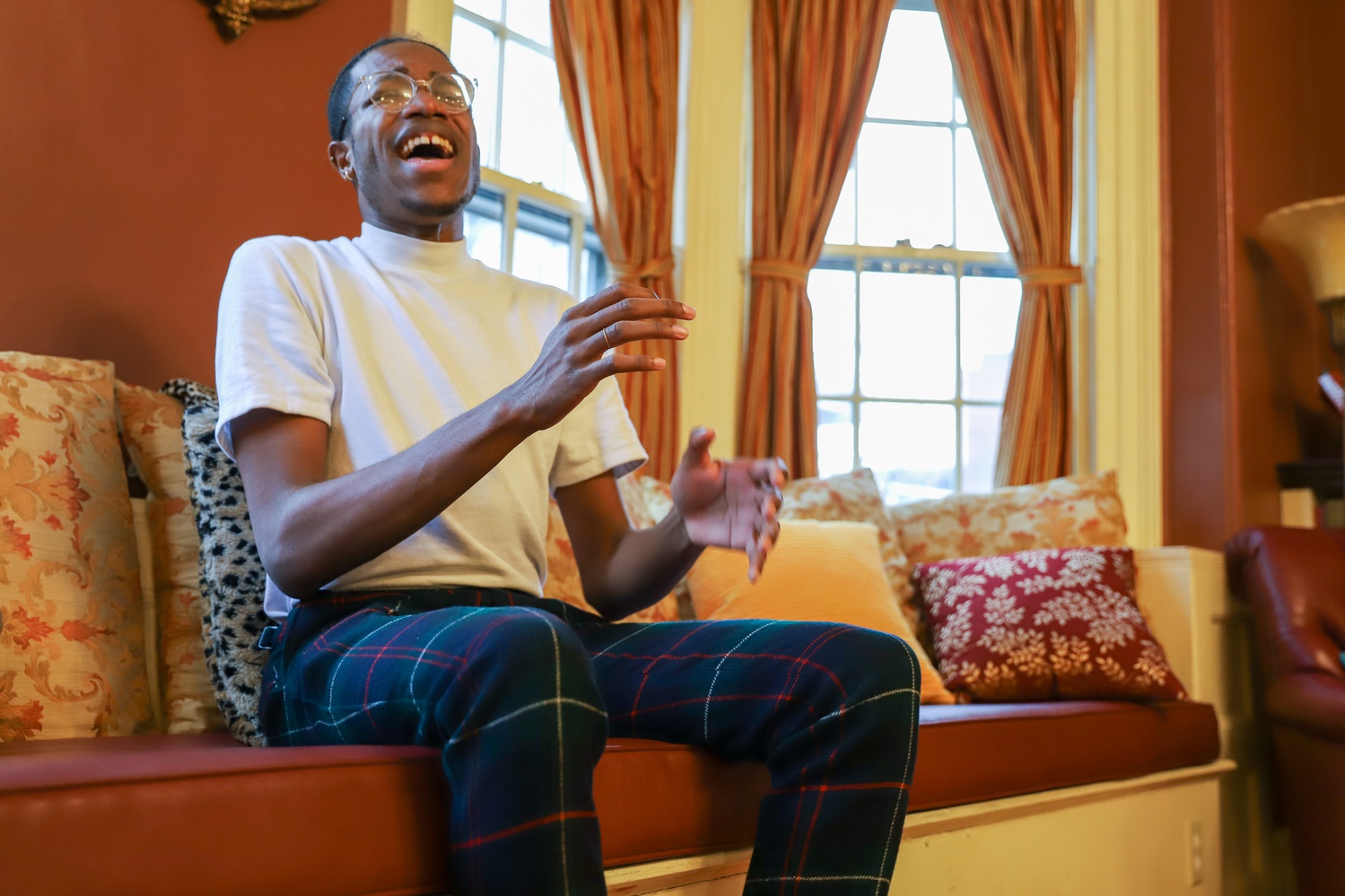 Even though Derry had a baby grand and a father who taught people to sing, it wasn’t until third grade that he realized he had a talent for singing himself. It was dismissal time, but the school buses were late. To pass the minutes, children were told to take turns giving a performance. Derry sang “I Just Can’t Wait to be King,” and remembers thinking, “I kind of like how I sound in my head when I’m singing. I don’t know if people will like it, but I have to try.”

But third grade brought its trials, too. Derry’s mother lost her job, and his family fell behind on their mortgage. A lawyer offered to buy the building, rent it to the family, and sell it back to them when they had enough money again. But the lawyer didn’t end up doing any of those things. One July evening, just before Derry entered the third grade, he went inside for dinner to find the dining table was gone. All of their possessions were in boxes. Derry’s family didn’t have another home for a long time after the house with the baby grand.

As his family moved from basements to cars to hotels and back again, Derry became a competitive Pokemon battler on Youtube and excelled in school. His mother did what was necessary to keep Derry from having to switch schools. Derry tells me her rationale: “Your life is already so unstable, your schooling should be something that’s stable.”

Derry explains that he now understands the risks his mother took. “There are a lot of black women, especially, who are in prison for lying about addresses to keep their kids in the same schools.”

Derry’s roommate steps over us in the stairwell on his way to their suite. They’ve have known each other for much longer than their time at Harvard. They went to Prep for Prep together, the academic “boot camp” that Derry attended through seventh and eighth grade. After Prep for Prep, they were students at Hotchkiss, and soon they will graduate from Harvard together.

Derry is concentrating in History and Literature with a secondary in Women, Gender, and Sexuality. The first part of his thesis is about how Madonna’s “Vogue” functions the show “Pose”. Derry is a Ralph Lauren brand ambassador; he has also worked as an intern at the Office of BGLTQ Student Life, a FAP proctor, and a member of the Lowkeys.

Derry never formally learned to play the piano and he never took singing lessons, but he can play piano and he can definitely sing. “Those are the kinds of things I picked up from my dad, just by being his son,” he says.

“The actual job I want in my real life is to be a talk show host,” Derry adds. He will hold other jobs before that, but, he says, he has a feeling that something is going to happen. “I don’t want to be rich, but I do want to be famous.”

I say goodbye to Derry and walk out of the stairwell. As the door closes behind me, he begins to sing.