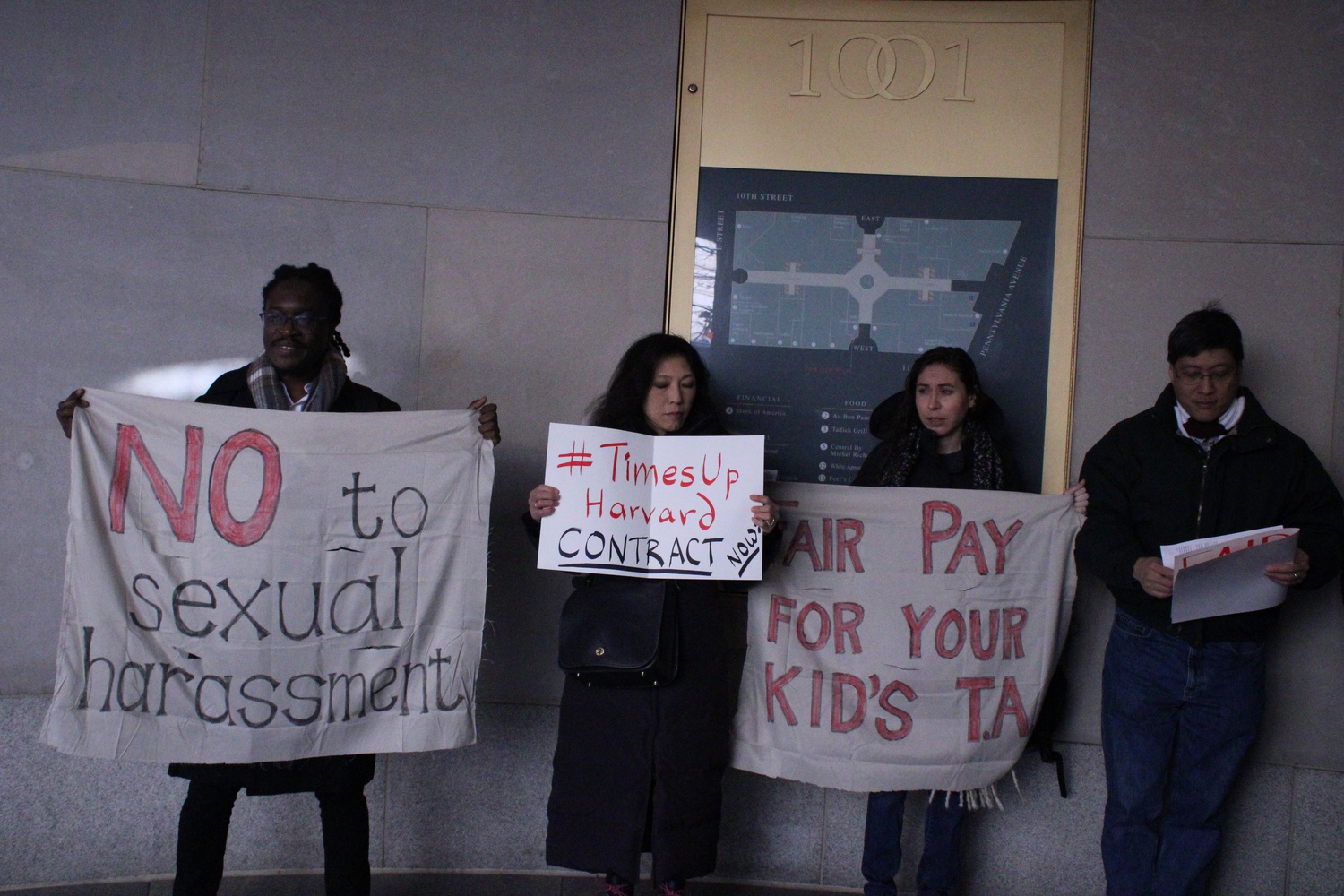 Supporters of Harvard’s graduate student union rallied in four cities around the country Wednesday morning to pressure members of the Harvard Corporation to support the union.

The protests occurred the same day as negotiators from Harvard and the Harvard Graduate Students Union-United Automobile Workers convened for their first bargaining session since the union went on strike over two weeks ago.

Harvard alumni, students, and local supporters gathered at the offices of Corporation members in Boston, Chicago, New York City, and Washington, D.C. around 9 a.m. Eastern time for the demonstrations.

The 13-member Harvard Corporation is the University’s highest governing body. A Wednesday HGSU-UAW press release notes that the Corporation members “have the power to direct the administration to reach a fair agreement.”

“Harvard’s intransigence is creating a widening crisis for the university,” Benjamin L. McKean ’02 wrote in the press release. “We began organizing solidarity actions in Boston, and immediately, alumni and supporters across the country wanted to join.”

University spokesperson Jonathan L. Swain declined to comment on the protests; the four targeted Corporation members did not respond to requests for comment Wednesday morning.

HGSU-UAW has been negotiating with Harvard for its first contract for over a year and a half. After more than 90 percent of participating members voted in October to authorize a strike, members took to the picket lines on Dec. 3. They have remained on strike for 16 days – the longest graduate student union strike nationwide in recent years.

While HGSU-UAW and the University had agreed on 12 tentative provisions before Wednesday’s session, they remained at an impasse on key issues such as compensation, health benefits, and a grievance procedure to adjudicate sexual harassment and discrimination complaints. On Wednesday, the parties added six agreements to that total, though none related to the three key issues.

In Boston, protesters gathered at the office of Harvard Corporation Senior Fellow William F. Lee ’72, who is a partner at the law firm WilmerHale. Lee also served as the Harvard’s lead trial lawyer for a high-profile affirmative action lawsuit against the University’s race-conscious admissions policy last year.

Roughly 10 protesters gathered in the lobby of 1001 Pennsylvania Avenue in Washington, which houses the Carlyle Group, a private equity firm that Rubenstein co-founded. After several speeches from protestors, security guards asked the group to leave and the protest continued on the sidewalk outside.

Samuel S. Klug, a union organizer and History Ph.D. student, said at the Washington, D.C. rally that Rubenstein held responsibility for the University’s position at the bargaining table, asking him to advocate for the union to University President Lawrence S. Bacow and University Provost Alan M. Garber ’76.

“We are here to say, David Rubenstein, Harvard Corporation member, you are personally accountable — personally responsible — for the fact that the Harvard administration has only agreed to one bargaining session after three weeks of this strike,” Klug said at the protest in the lobby. “We are here to say David Rubenstein, it is on you to tell Provost Garber, President Bacow, and other members of the Harvard administration that this will not stand.”

Paula J. Caplan ’69 said in an interview after the D.C. rally that she went upstairs to Rubenstein’s office, where she was told that Rubenstein was out of the office Wednesday. Caplan — who co-wrote a letter last month signed by 45 members of the Class of 1969 urging Harvard to improve pay and job security for graduate students and non-tenure-track faculty — said she was heartened by the protest Wednesday.

“It was really good to know that in various cities around the country, there were these simultaneous demonstrations of protest in support because what the Harvard administration is doing — or not doing — is really unconscionable,” Caplan said.

In Manhattan, approximately 15 people — including members of graduate student unions at Columbia and New York University — gathered outside of Barakett’s Office at Stabilis Capital Management. Four protesters tried to go upstairs to deliver a letter to Barakett, but security guards turned them away, according to Elizabeth C. “Liz” Vladeck ’99.

The group chanted in the lobby of the building, then in the plaza outside the building until they were asked to leave, at which point they continued the protest on the sidewalk.

As the New York rally concluded, the organizers said they would protest at the nearby Harvard Club next if the union’s demands are not met.

The three-hour bargaining session Wednesday comes more than two weeks after the parties’ last session on Dec. 2. In the last meeting, HGSU put forward a package of economic proposals with reduced ask on annual salary raises, support for student workers’ insurance premiums, among other topics. The union and the University scheduled Wednesday’s session last Friday, before which Harvard said it had been evaluating the union’s package.