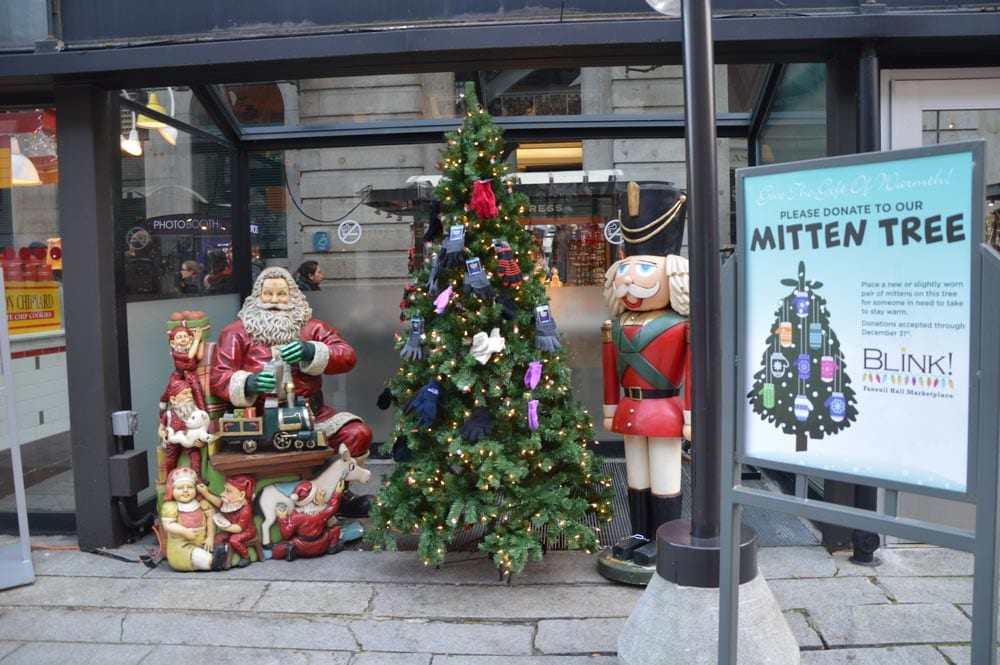 Faneuil Hall's Holiday Mitten Tree offers one way to give back this holiday season. By Courtesy of Faneuil Hall
By Kathryn B. Klein, Crimson Staff Writer

Sleigh bells ring. Tiny lights twinkle and glisten, nestled in needle laden branches and wrapped around curling bannisters. The smell of evergreen trees and fresh snow seeps in from the outside, mingling with the thick scent of firewood turning to cinder and gingerbread cookies baking to a crisp, golden brown.

This is the idyllic winter of storybooks. But on a college campus, the closest one can get to the tinkling of bells is a morning alarm. It can be difficult to chop down an eight foot tall evergreen between 9:00 a.m. class and the club meeting looming in the afternoon, not to mention the challenge of fitting said tree into a dorm room. And don’t even think about lighting a cozy fire in your common room’s fireplace, if your room has one. But nevertheless, holiday spirit can be found all around if you know where to look.

A quick disclaimer: although Christmas is often a ubiquitous signifier of this jolly, wintertime cheer, many of us identify with another faith or no faith at all. Fortunately, many local happenings can be enjoyed as an entirely secular experience, celebrating community, philanthropy, the winter season, and those around us. Now, without further ado, here is a small selection from the many holiday events taking place in the Cambridge and Boston area in the coming weeks.

For those looking to share the warmth of the holidays

Something about turning the calendar page to December imbues many with a strong desire to give back. If you are among them, be sure to check out Faneuil Hall’s Holiday Mitten Tree. There you can hang up a pair of new or gently worn mittens, knowing they will find a wonderful home in the coming weeks.

The goal of the mitten tree is simple according to Edward Hurley, Faneuil Hall’s Marketing Director.

“Last year we decided that we wanted to give something back to the community. Therefore, we decided to install a Mitten Tree for the holidays so that those in need [can] take a pair of mittens to help stay warm,” Hurley said.

The tree is currently up, and donations will be collected until Dec. 31. This is also an opportunity to visit Faneuil Hall’s majestic holiday tree, the site of several other seasonal events, including Tuba Christmas. While this year’s concert has sadly passed, keep it in mind next year if the notion of hundreds of tubas playing holiday tunes sounds like your cup of eggnog.

For those hoping for a more unconventional holiday celebration

Worry not — Boston has one winter tradition that is certainly a bit unexpected, and this year marks its 20th anniversary! The Santa Speedo Run began in 2000 when a group of five men decided to sprint down Newbury Street clothed in nothing but speedos and Santa hats. What began as a small stunt now features hundreds of participants and has raised nearly $2 million for children’s charities in the Boston area.

Participants in the Speedo Run must be at least 21, and the run is limited to the first 700 people who sign up. If the only thing holding you back is that you don’t own a speedo, there’s good news.

“We encourage runners to dress however they feel most festive! This could include all manner of holiday garb (Santa Suits, Yukon Cornelius outfits, Speedos, Reindeer horns, Christmas Onesies, Grinch Green),” the organizers of this year’s run write on their website.

If something more than lack of a speedo is keeping you from signing on, (frigid temperatures, anyone?), you can make an online donation.

For those looking to avoid dreaded holiday travel time

If you are bogged down by final papers and exams and can barely imagine crawling out of the library, here is a solution that requires basically no travel time. Matinee and evening performances of “The Christmas Revels: An American Celebration of the Winter Solstice” will take place Dec. 13-29 in Harvard’s own Sanders Theatre.

Founded in 1971 by legendary concert baritone John Langstaff alongside his daughter Carol, the Revels show celebrates, “the music and customs of cultures around the world.” The show is entirely new each year. While last year’s production featured a Nordic theme, this year’s show will focus on American folk tales and cultural traditions.

“What we do is try and frame the music and the customs, the little rituals that happen in a culture,” artistic director Patrick Swanson said. “Within any given culture, the things that people really appreciate, really treasure about their own culture, frequently end up in songs and games and dances and bits of stories. And that's passed on, usually orally, from father to son and mother to daughter. And that's the stuff that we're interested in.”

The team works with a series of “tradition bearers” to get a first hand account of the world they will feature. This exhaustive research process has a profound impact on the show itself and the people who perform it.

“It was a complete musical immersion for me. And connecting with people who are experts in the field, especially the tradition bearers, helped to shape a lot of the show,” music director Megan Henderson said.

“The audience will leave with a taste of it, but these hundred people, including the kids, who have been up close, experiencing this, [are] I think transformed in some way. It makes people more aware of the fact that these are not others. These are the different versions of ourselves,” Swanson added.

And on that note, regardless of how you choose to celebrate this season, here’s wishing everyone a healthy and joyous new year.

— Staff writer Kathryn B. Klein can be reached at kathryn.klein@thecrimson.com.