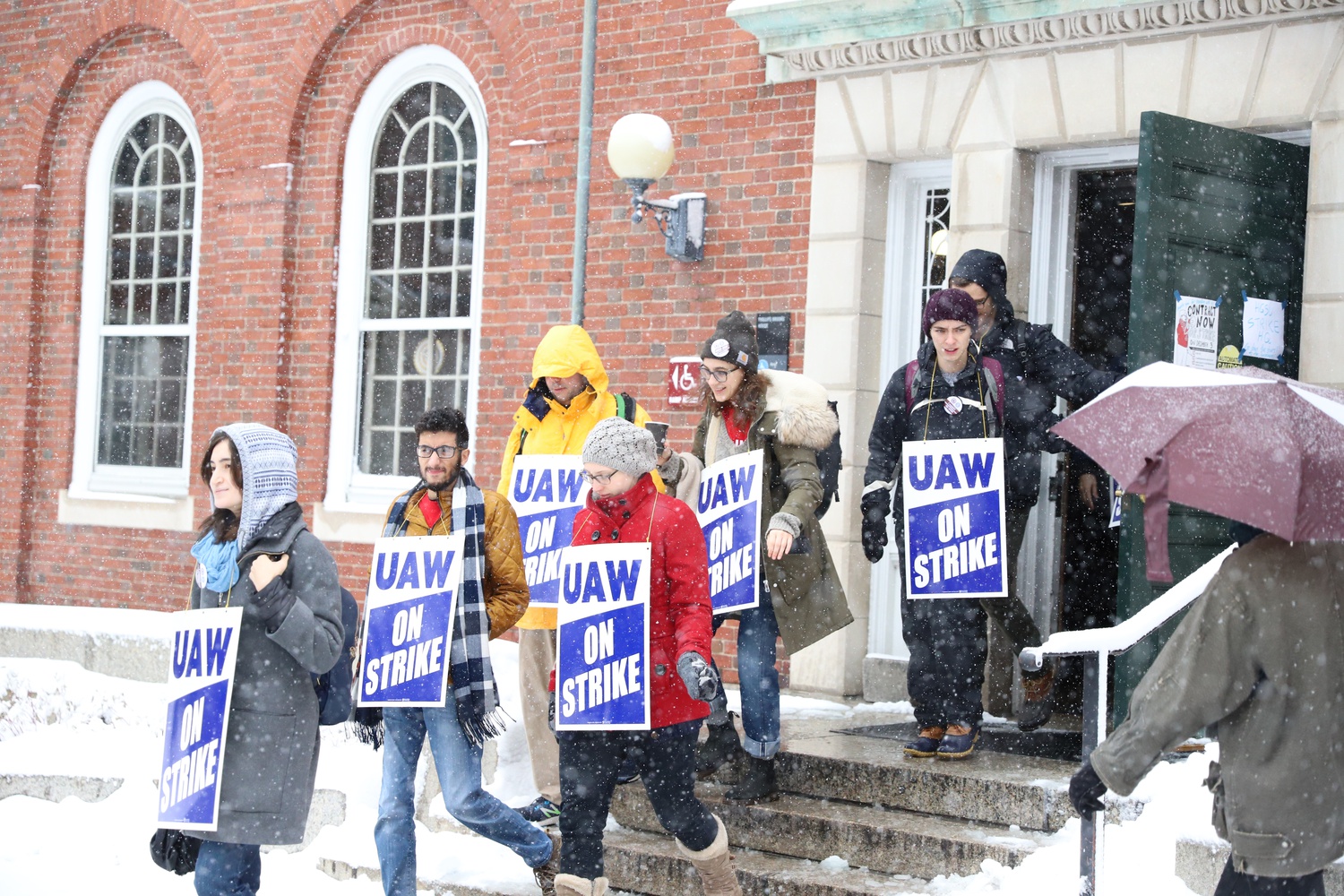 Members of Harvard’s graduate student union, bundled in winter coats and donning signs, braved heavy snowfall to picket in Harvard Yard Tuesday on their first day of their strike.

Carrying signs reading “UAW on Strike” and chanting “What do we want? Contract! When do we want it? Now!” Harvard Graduate Students Union-United Automobile Workers demonstrators marched from their strike base at Phillips Brooks House Association to Massachusetts Hall just after 10 a.m. They spent the rest of the day transitioning between marching routes throughout the Yard.

The strike officially began at midnight on Tuesday after more than a year of negotiations between Harvard and the union failed to yield agreements on key contract provisions. During a bargaining session Monday both sides offered new proposals, but no new agreements were reached.

HGSU announced their Dec. 3 strike deadline in November after voting members overwhelmingly approved strike authorization in late October. Since bargaining began in October 2018, HGSU and the University have held 28 sessions. They have reached tentative agreements on 12 contract provisions, but remain deadlocked on issues including compensation, health benefits, and grievance procedures for sexual harassment and discrimination.

Shortly after the strike began, students from classes across the University walked out to join the picket line and participate in a rally featuring HGSU organizers, politicians, and faculty members on the steps of University Hall. 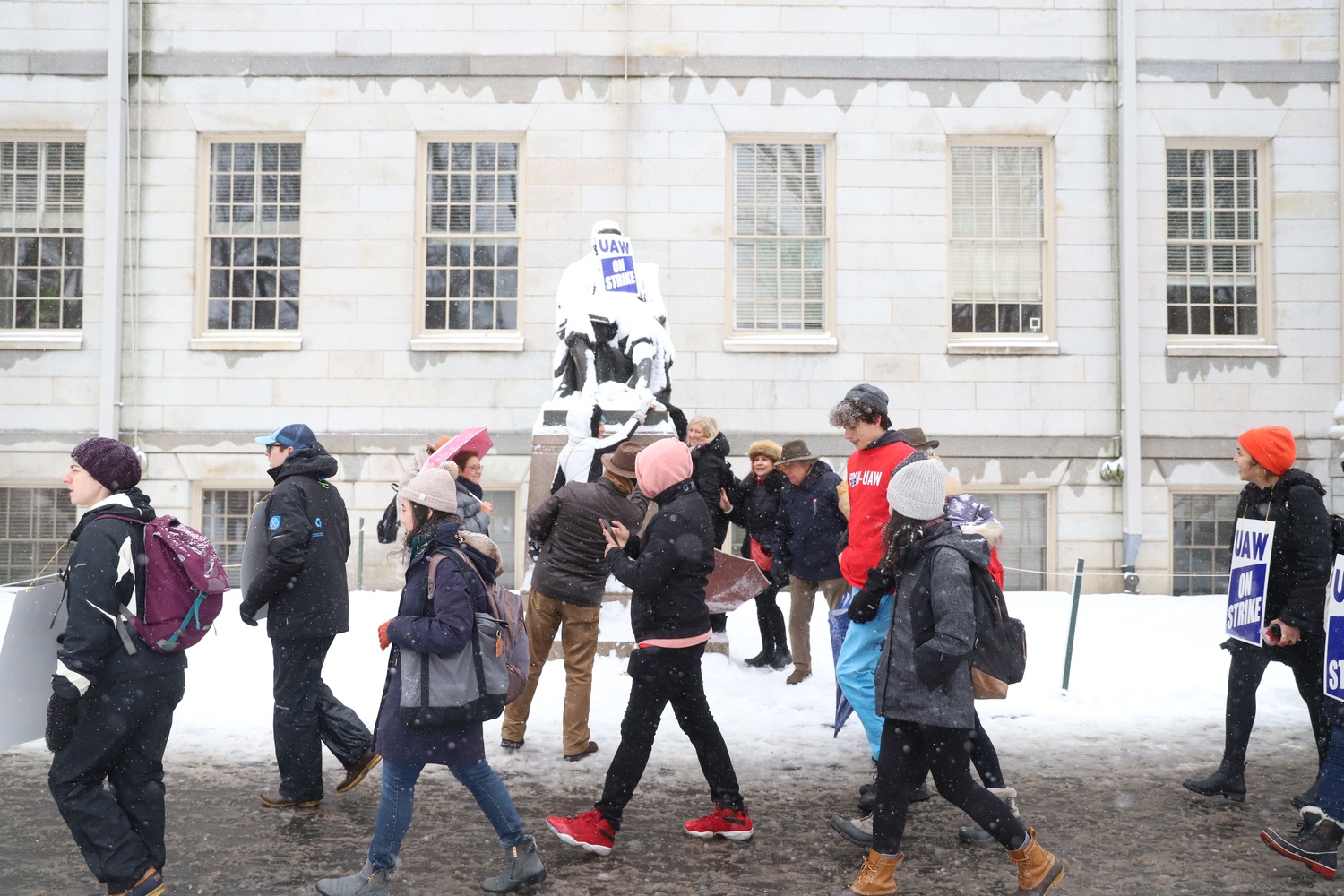 Strikers march past the John Harvard Statue, which bears a sign supporting the union. By Kathryn S. Kuhar

“You are changing the world through your research and through your teaching, and now more than ever, we need you in the classroom, not on the picket line,” Decker said. “I am calling on President Bacow, who has an incredible history of being attuned to social and economic justice. It is who he has been, it is how he has led. He needs to straighten this boat and get it right soon.”

UAW, which serves as the parent union for several university graduate student unions across the country, also sent leaders to support the strike effort.

In her remarks to the demonstrators, UAW regional director Beverley Brakeman told supporters the international union supports its Harvard chapter “all the way.”

“You know what I want to say to Harvard President Bacow sitting over there? ‘Shame on you,’” Brakeman said.

Professor of the Practice of Public Philosophy Cornel R. West ’74, who marched with strikers in a suit but no coat, said that he was not bothered by the day’s below-freezing temperatures.

“You get warmed up by this kind of solidarity,” West said.

Multiple 2020 Democratic Presidential candidates voiced their support for HGSU on Twitter throughout the day Tuesday.

Sanders included a photo of him meeting with union organizers during a labor event he held in New Hampshire last week.

“Last week I met with students from @hgsuuaw, and this morning they began their strike,” Sanders wrote. “I stand with them in demanding Harvard's administration to guarantee student workers a living wage, access to adequate health care, and protection against harassment and discrimination.”

The protest also captured the attention of tourists in Harvard Yard, including 26-year-old Gabriela Junqueira from Brazil.

Ethnic Studies demonstrators holding their own protest at the meeting merged with HGSU when they reached Emerson.

Several protesters attempted to hold their picket signs up to the windows of the faculty meeting.

Hours later, the strike concluded with demonstrators gathering outside Emerson to chant as Bacow and other faculty members left the meeting.

Bacow ultimately left the faculty meeting just after 5:30 p.m. in a waiting car.

As Bacow’s car sped away, demonstrators chanted “Shame! Shame!” before returning to PBHA.