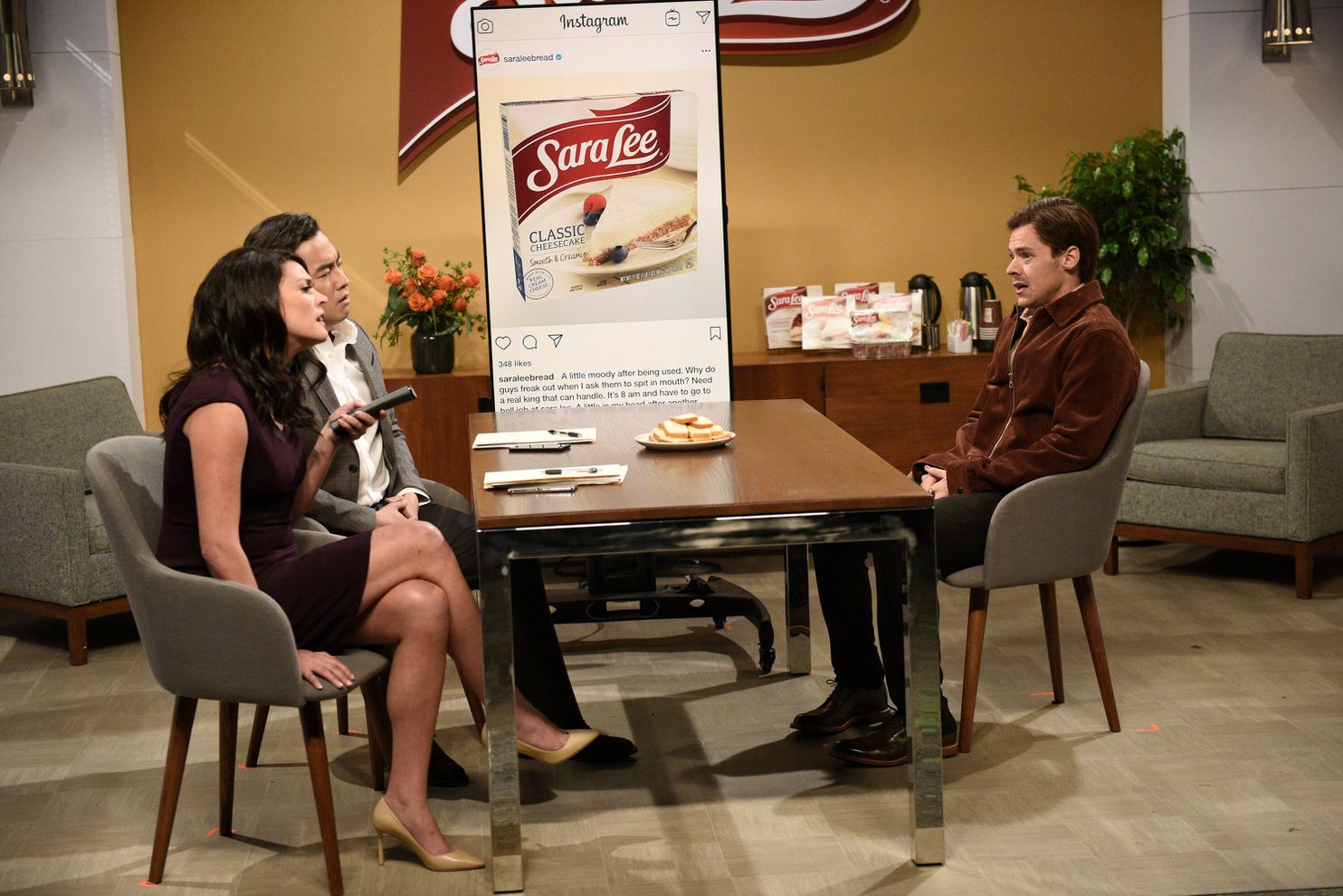 Everyone who wanted to hear Harry Styles say “getting railed to death” on live TV got their wish last weekend. Delivered in an American accent nearly as sexy as his British one, Styles’ played the role of an intern caught leaving sexually explicit messages via the Sara Lee Instagram account. Sara Lee, for the uninitiated, is a bread company known for “its delicious baked goods,” according to the company’s actual Instagram bio. It’s not hard to see why the Internet blew up.

The sketch recounts the talking-to that Styles’ character receives — mostly in response to his thirsty comments on Nick Jonas’ Instagram account, but also his laments about failed threesomes that end up as captions for Sara Lee’s own posts. Notably, he doesn’t show remorse, which is understandable: After all, his character never achieved his dream of getting railed by a “random guy with only 200 followers,” and has to grapple with said failed threesomes. Are there any better coping mechanisms than this?

The actual, real-life Sara Lee Instagram account had to disable comments because people began to flood the account with the same emojis used in the skit — it looks like they’re back now, even though people are showing no signs of withholding their thirsty comments.

There are, of course, a few reasons underlying this latest viral hit. First, it’s an excellent example of the correct way to make homosexuality the centerpiece of comedy without making it the butt of the joke. Finally! Comedy writers, take note: Skit writers Bowen Yang and Julio Torres show that it’s possible to develop a skit about being gay without being mocking and derisive.

Second, Harry Styles is the centerpiece of the nearly four-minute skit. Fans who loved him when he sang “What Makes You Beautiful” back in 2011 are now eight years older: They’re now ready to see, and delight in, the spectacle that is Styles’ unabashed acknowledgements — even if it’s only when acting out a corduroy-clad caricature — that he is both thirsty and dealing with the universal miseries of rejection.

Virality is a curious thing: Much of it is attributable to Twitter, and this video is no exception. People who had never understood Styles’ appeal found themselves descending a YouTube rabbit hole, while others merely marveled at the skit’s genius. The video has all the perfect elements: brevity, relatability, and some element of never-been-seen-before. It will be an integral part of a not-yet-emergent field of studies devoted to memes, Internet culture, and how they both proliferate. Ten years from now, if people dig up the video again, it will still be a hit, with the eggplant, train, and ghost emojis front and center.