'thank u, next' Will Take Its Time And Appreciates Your Patience 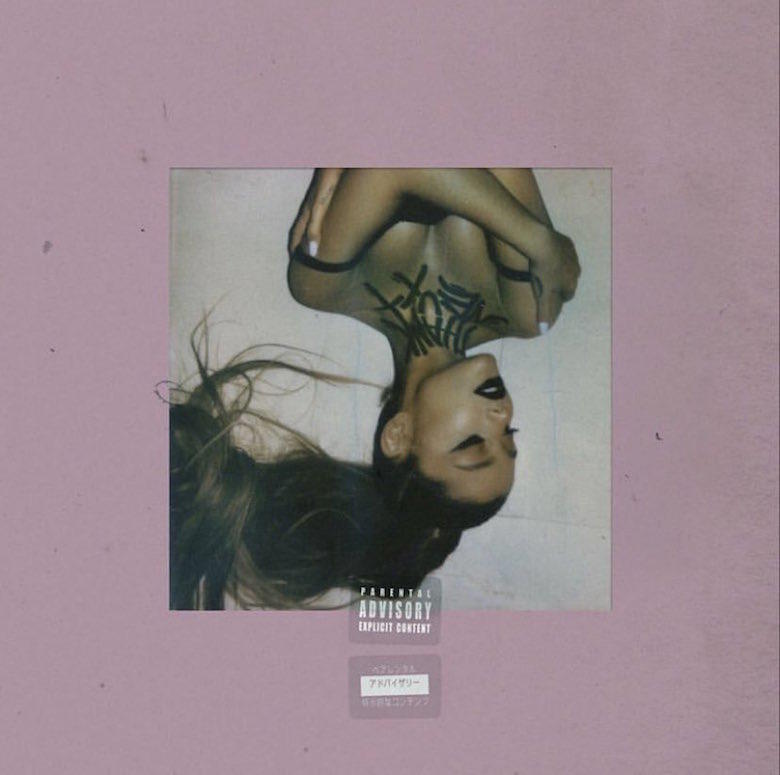 We live in a world enthralled by connection. To feel is to draw eyes, and to invite, if not demand, scrutiny. Take Ariana Grande, whose last few years have seen her consecutive tragedy and heartbreak broadcasted across airwaves and tabloid covers. Grande has been forthright about her use of music as a healing process: Her latest album comes barely a half year after her previous release, “Sweetener.” Embracing the blasé over the saccharine, Ariana Grande’s “thank u, next” redefines grief in the age of celebrity.

In many ways, this record can only be understood relationally as the offshoot of its immediate predecessor. Juxtaposed against the pastel caramel of “Sweetener,” the greyscale, graffitied cover of “thank u next” brings a near-unconvincing level of bite. The albums’ respective designs, however, aren’t actually that different: Taken together, the two tell the story of a life turned, quite literally, upside down. Whereas “Sweetener” meets strife with simple gratitude, “thank u, next” confronts this emotion more aggressively.

What sets this album apart from its predecessor is its production. While “Sweetener” had moments that were overproduced — its first half suffered from the heavy handed funk that producer Pharrell is known for — this new release is correctly conceived. It feels as though Grande understands the type of music she wants to make and is fully equipped to do so: She weaves the towering vocals of her pop work with the moodiness of R&B and a smattering of trap. Fans who worried that her run of room-filling tracks had come to an end should find relief in this release. The funky brass of “bloodline” emphasized by bursts that are almost “Dangerous Woman”-esque and the secretive spontaneity of “bad idea” and its bouncing synths, are a firm reminder that Ariana can still land an upbeat bop.

What’s really impressive about this piece of work, however, is its reckoning with intimacy. Listening through the record, one gets the sense that Ariana is comfortable pulling back the curtain and opening her heart to viewers without it ever feeling disingenuous. “imagine" brings a bout of whistle tones atop light, rattling production. It’s measured and minimalist, bringing a conversationalism reminiscent of a back and forth between two people unaware but also unbothered by those around them who might hear. “needy” is draped in self-awareness, confessing that “I’m obsessive and I love too hard / Good at overthinking with my heart” before melting into a pool of sentimental strings. “ghostin,” a track which likely contends with the feelings she has faced regarding both her breakup with Pete Davidson and the death of her ex-boyfriend Mac Miller, features lagoon-like synths aside layered vocals which call back to the sleep imagery of past track “R.E.M.”

If anything, this album proves that Ariana is an expert at framing. Several of her songs are preceded by samples: “bloodline” includes a quote from her grandmother Marjorie about satisfaction, “in my head” borrows from close friend Doug Middlebrook as he tries to pull Ariana down to earth, and “fake smile” plasters itself with the bitter joy of Wendy Rene’s “After Laughter.” Like the scrapbook cover art of “thank u, next” the single, the album feels thoughtfully cut and pasted together, patched with vignettes, quiet reflections, and notes scribbled in the margins. The best use of this stylistic device is the introduction by drag queen Shangela in “NASA,” proclaiming, “This is one small step for woman / One giant leap for woman-kind,” harkening back to “God Is A Woman.” The track is lofty, whimsical, and assertive, each letter of the acronym delivered with the energy of a grin over one’s shoulder. Ariana knows she contains multitudes, gently positing that the very cosmos belong to her in suggested negotiation with spacetime itself.

The tail end of the album is backloaded with her number one singles, “7 rings” and “thank u, next.” In the context of the entire album, the two are even more appreciated than they were on their own. Outfitted in candor and vulnerability, title track “thank u, next” is wholly unafraid to name drop or hold back. Those who wondered how Ariana could follow up such an in-the-moment cultural phenomenon with an entire album have their answers: Her release encompasses all of the love, patience, and pain that the surprise drop promised. The shift in tone of “7 rings,” though unexpected, also works well within the milieu of the larger album. Its self-aggrandizement is self-aware and defiant of those who feel as though they have the license to criticize her on the content of a single song, to surveil her healing process and police how she chooses to share it without knowing the entire story. People who take umbrage with this track are as in their heads as Doug Middlebrook points out Ariana is. Those who think that this performer truly believes she can spend her way to happiness can rest easy. She knows she can’t — trust me.

The closing track “break up with your girlfriend, i’m bored” is sonically consistent, but unwieldy given the logical exit option the title track would have offered. All things considered though, it really isn’t too out of place. The pre-chorus is silk, the tone is jarring enough to command attention, and the instrumental pulses with the same heartbeat that so many of the tracks in this album have. Yes, it might not have been most people’s first choice to wrap up the album, but an intimate look at one’s emotions isn’t most people’s first choice to mourn.

Break up with your expectations. Ariana is bored.
—Staff writer Rick Li can be reached at rick.li@thecrimson.com.