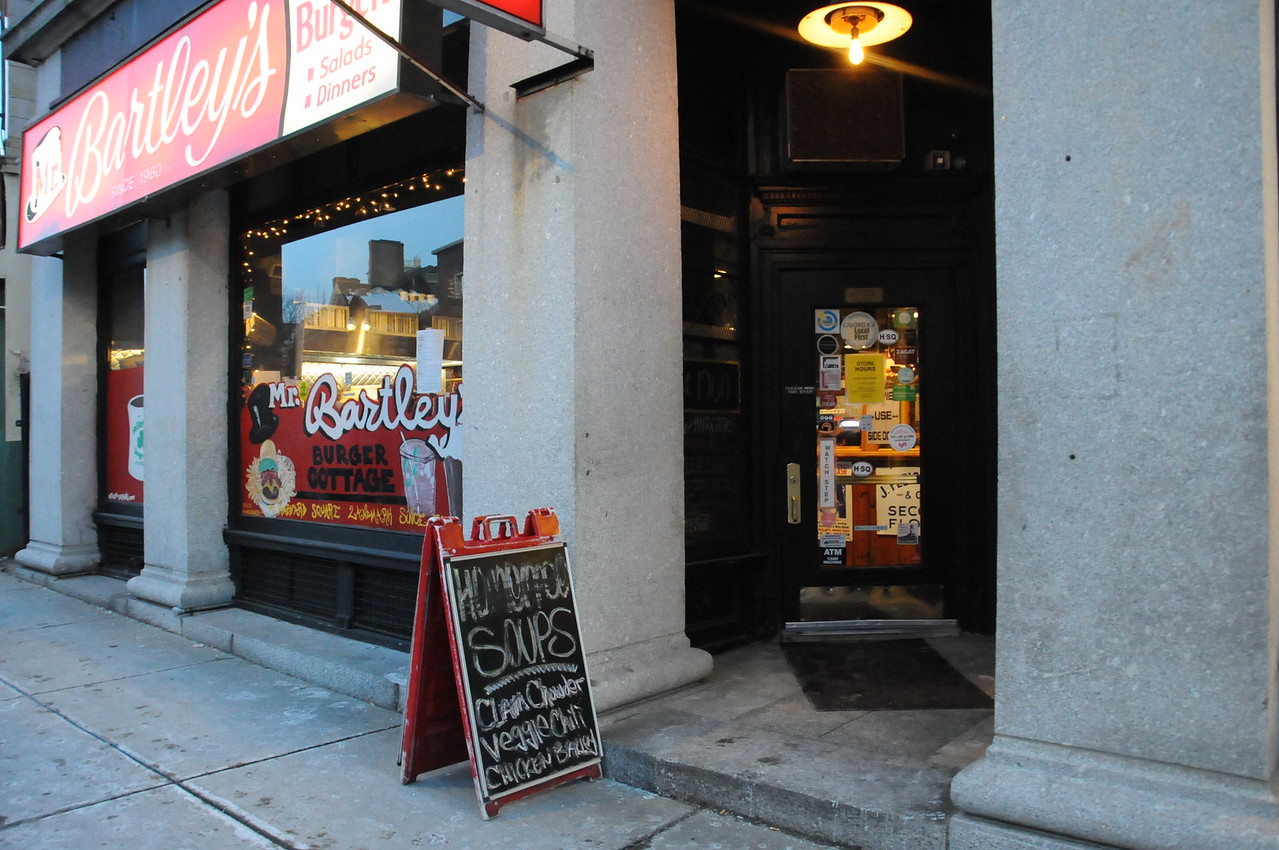 Mr. Bartley's Burger Cottage, a Harvard Square fixture, is facing a lawsuit alleging its entrance is inaccessible to people with disabilities. By Mia B. Frothingham
By Brie K. Buchanan and Peter E. O'Keefe, Crimson Staff Writers

A local man filed a lawsuit against Mr. Bartley’s Burger Cottage and Harvard, which owns the restaurant’s building, earlier this month, alleging that the restaurant violates the Americans with Disabilities Act.

The plaintiff in the case, Andres Ramon Melo, uses a wheelchair for mobility reasons and visited Bartley’s “individually and for personal reasons, and also as a ‘tester’,” according to the complaint, which he filed in federal court Feb. 6. Melo alleges that the restaurant facilities are inaccessible to those using wheelchairs, thus putting the restaurant in violation of the ADA.

Passed by Congress in 1990, the ADA is a federal law meant to provide a clear national standard with enforceable policies to ensure that people with disabilities “have the same opportunities as everyone else to participate in the mainstream of American life,” per the ADA website.

Melo states in the complaint that he encountered several “barriers to access” when visiting Bartley’s. Those barriers allegedly included a raised threshold with no ramp or similar way of access and inaccessible counters and public restrooms. When Melo “engaged and tested” those barriers, he “suffered legal harm and legal injury and will continue to suffer such harm and injury” as long as the building violates the ADA, the complaint states.

The complaint includes a list of nine specific violations that Melo found in the restaurant as well as references to the applicable sections of the ADA. He notes that the list is not comprehensive and asks that Bartley’s be inspected “to determine all of the discriminatory acts violating the ADA,” according to the filing.

The complaint alleges that Bartley’s and Harvard are discriminating against individuals with disabilities by “denying access to, and full and equal enjoyment of the goods, services, facilities, privileges, advantages and/or accommodations of the Facility.”

The current owner of Bartley’s, Bill Bartley, declined to comment.

Harvard spokesperson Brigid O’Rourke wrote in an emailed statement that the University, working in conjunction with experts, could identify “some readily achievable improvements.”

“Harvard is working toward renewing the lease to Mr. Bartley’s Burger Cottage, an iconic Harvard Square business,” O’Rourke wrote. “It is widely recognized that older buildings, particularly those in urban environments such as this one, can present unique challenges for accessibility, but Harvard anticipates that with the assistance of appropriate experts, some readily achievable improvements can be identified.”

Melo is requesting that the court issue a permanent injunction ordering Harvard and Bartley’s to “remove the physical barriers to access” and alter the building so that it complies with ADA regulations. He is also demanding that the defendants pay for his legal costs.

The lawsuit against Bartley’s and Harvard is not Melo’s first attempt to litigate against businesses for alleged violations of the ADA. He often serves as a “tester,” visiting public spaces that allegedly have “illegal barriers to access,” according to the complaint. He then photographs and documents the location while assessing the “extent to which there are illegal barriers to access.”

Melo has been the plaintiff in “dozens” of federal suits at the U.S. District Court of Massachusetts over the past decade, according to his attorney, Edward N. Garno. Melo currently has nine open cases in Massachusetts including the Bartley’s suit, five of which were filed Tuesday.

“He’s an advocate for disabled communities,” Garno said in an interview.

Melo is also represented by attorney Todd W. Shulby of Weston, Fla., who did not respond to multiple requests for comment.

Melo plans to return to Bartley’s in the future to ensure that changes have been made and that the building owners are complying with the regulations stated in the ADA, according to court documents.

–Brie K. Buchanan can be reached at brie.buchanan@thecrimson.com