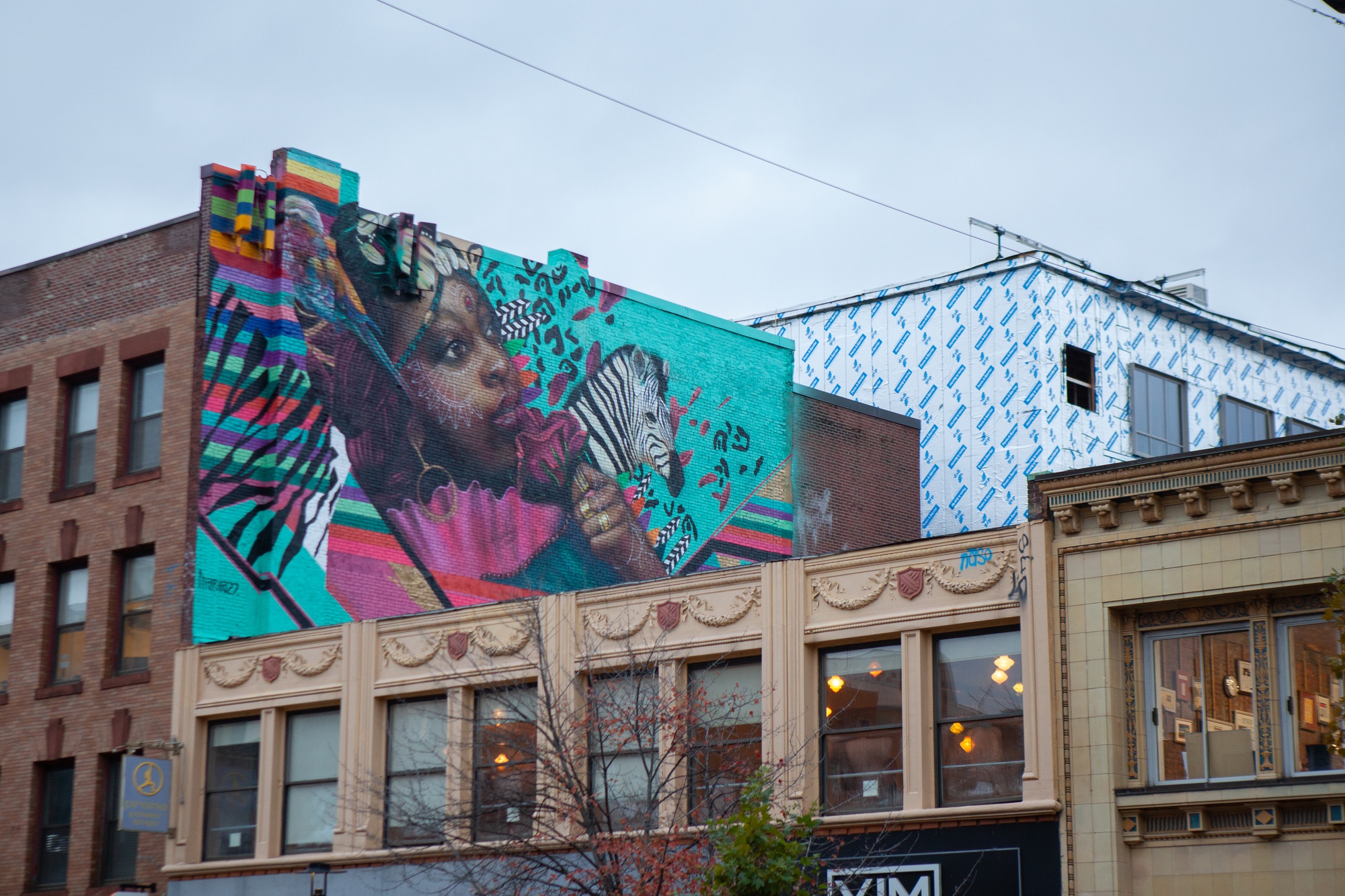 “Each artist is mindful about Central Square, its past, its present, its future,” Monestime says. “The neighborhood is changing, the property ownership is changing. The neighborhood could lose its authenticity, and we don’t want that to happen.”
By Letitia C. Chan and Kai R. McNamee

In a Central Square parking lot behind Pandemonium Books and Games, a vibrant floral mural bursts with lotus blossoms and pastel waves. Nearby, on a wall of the Bank of America building, an urban nightscape reminiscent of a Blade Runner set overlooks the bustling crowds of the Square.

These are the works of Lena McCarthy and Percy Fortini-Wright respectively, two of the 10 Boston-based artists who worked on the ongoing Central Square Mural Project, an initiative spearheaded last August by the Central Square Business Association and the Cambridge Arts Council.

The project seeks to preserve Central Square’s individuality against a backdrop of gentrification, according to Michael Monestime, executive director of the CSBA. “Each artist is mindful about Central Square, its past, its present, its future,” Monestime says. “The neighborhood is changing, the property ownership is changing. The neighborhood could lose its authenticity, and we don’t want that to happen.”

Central Square, which the Massachusetts Cultural Council designated as a Cultural District in 2012 for its diversity of restaurants, churches, and entertainment venues, has long been home to an array of murals. Unlike many past mural projects, however, which were commissioned for municipal properties, these new murals are canvassed on private properties.

Jason Weeks, the executive director of the Cambridge Art Council, recalls local residents’ and businesses’ enthusiasm for the project. “We have so many different creative organizations, we have city-generated artwork, but what we lacked was this opportunity to amplify public art in private space.”

The Arts Council and the Central Square Business Association crowdfunded $25,000 from 132 different donors last October, a sum that the Massachusetts state development company MassDevelopment then matched. All 10 murals are projected to be completed this spring.

Central Square artists have not always received the support of large community initiatives for their work. In 1997, Pasqualina Azzarello undertook an independent project to paint her first outdoor mural in Central Square, a tribute to French artist Marc Chagall on Norfolk Street.

“I went on a walk — a very, very long walk — for three days in a row. I made a list of 30 building owners, and I proceeded to call them,” she says. When 29 of her offers were declined, she did not feel discouraged: “I was so young and naive at the time,” she says, and she was happy to receive one “yes.”

Over the course of the month she spent painting, Central Square locals kept stopping her out of curiosity, and Azzarello told them about her work, receiving hundreds of dollars in coins and bills as tips from her supporters. “That was very real money to me,” she says. “I learned public art creates connections. People want to be engaged.” 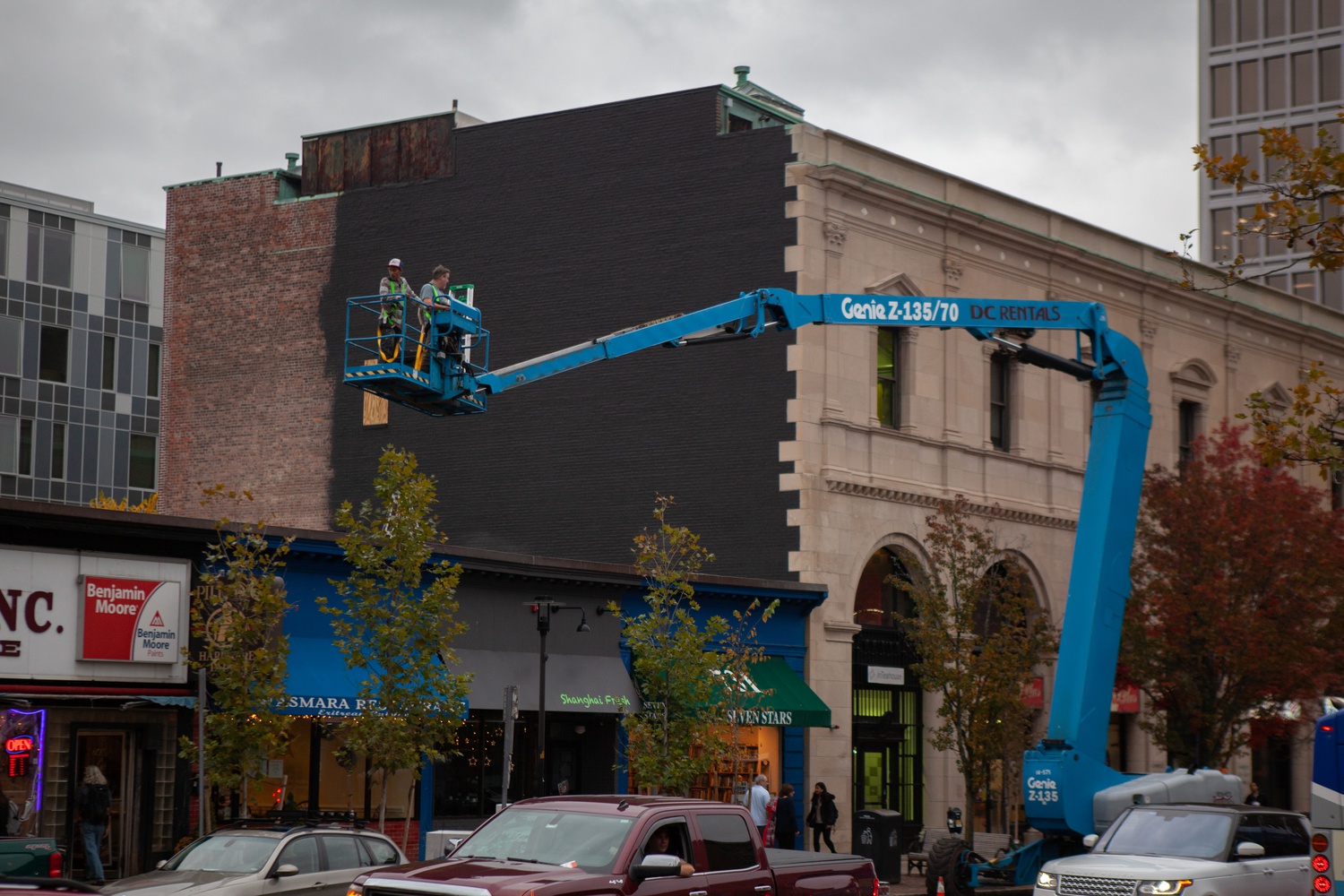 Azzarello’s mural has since been painted over for the new project, but she does not mourn its loss. As murals fade they are replaced by new ones, and artists often come back to make new art in other parts of the square, an invitation Monestime has extended to Azzarello.

The Central Square Mural Project has given a new crop of young artists the opportunity to showcase their work.

Sneha Shrestha, a 2017 graduate of the Harvard Graduate School of Education, has re-energized Main Street and Massachusetts Ave. with gold and purple Sanskrit text that climbs vine-like up the side of a five-story MIT building.

The quote at the center of her painting is from a Nepali poet, who writes about notions of success. In the “melting pot” of the Square, Shrestha said she believes that “[Art] encourages you to have different perspectives and definitions of success.”

Shrestha is a native of Nepal who first came to America for college. She did not have easy access to art as a child, and does not take exposure to art for granted. She opened the first Children’s Art Museum in Nepal, and through her work in the United States, she says that she hopes to express a “cultural aesthetic that is not always apparent in Boston,” thereby “sharing [her] culture in a deeply personal way.”

Monestime explains that all of the artists commissioned for the project are local to the greater Boston Area or have a significant connection to Central Square.

“The first place I ever painted a wall was the graffiti wall in Central Square — even before I painted in Nepal — because I was exposed to street art here,” Shrestha says. “Everything’s come full circle in a lot of ways.”

— Magazine writer Letitia C. Chan can be reached at letitia.chan@thecrimson.com

— Multimedia Chair and magazine writer Kai R. McNamee can be reached at kai.mcnamee@thecrimson.com.