A goal in each period and a shutdown performance in net gave the Crimson the edge in its final home game of the regular season.
By Stuti R. Telidevara 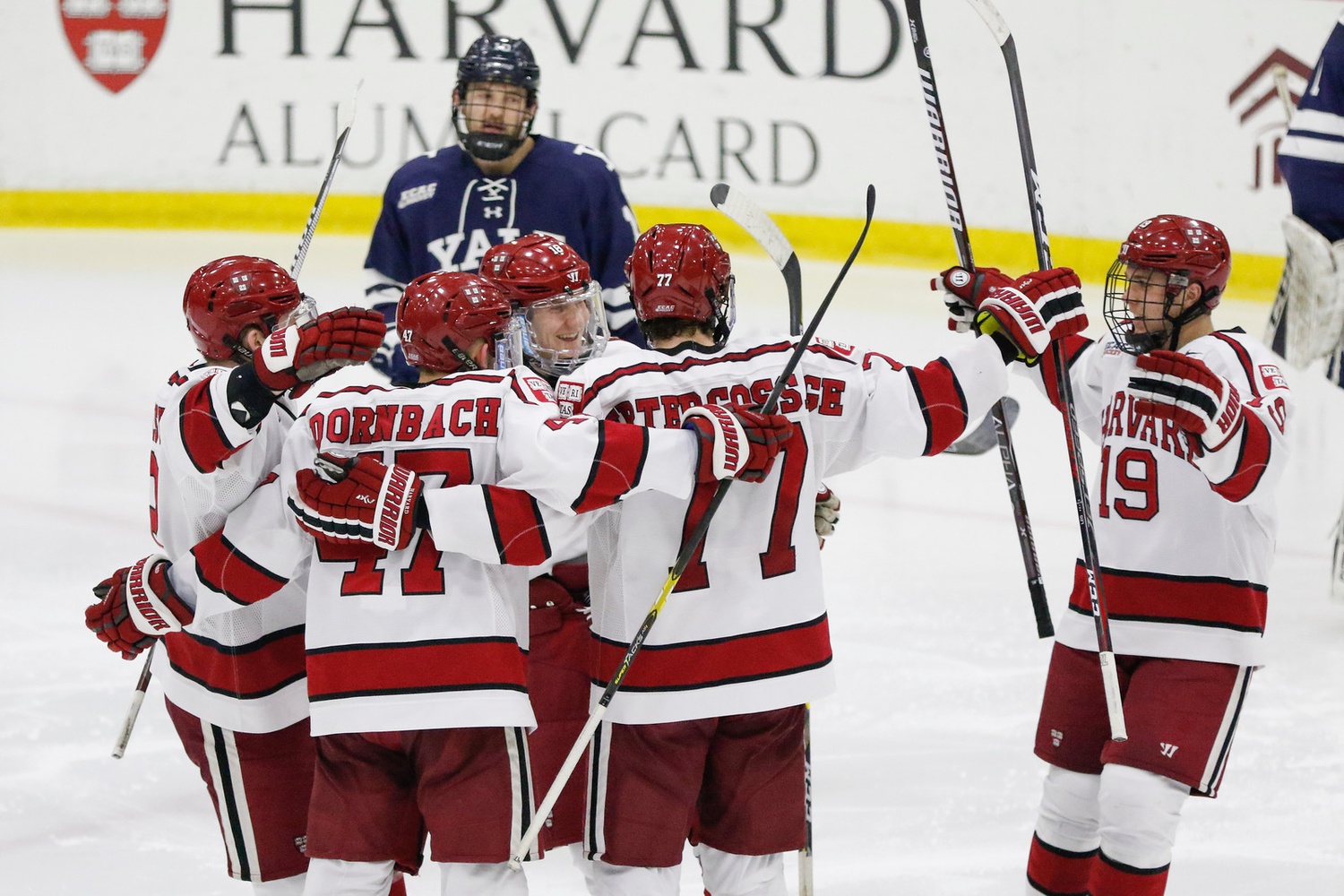 The last time the Harvard men’s hockey team met Yale, in New Haven, Conn., the game ended in a stalemate. Before that, the Crimson hadn’t beaten the Bulldogs in the regular season since Feb. 17, 2017. Add to that the fact that Saturday’s matchup — the game that would decide the season series — was also Harvard’s Senior Night, and you have a contest that’s bound to be a back-and-forth treat.

But the No. 17/15 Crimson (16-8-3, 12-6-2 ECAC) wound up getting the better of the Bulldogs (13-11-3, 11-8-1) early in the first and never looked back. The star of the show was junior net-minder Cameron Gornet, who backstopped the team this weekend in place of injured senior Michael Lackey. Not only did Gornet lead his squad to a 3-0 shutout, he also was awarded the Tim Taylor Cup, given to the most valuable player in a Harvard-Yale contest at Bright-Landry.

"When you come to Harvard, the big rivalry you always talk about is Harvard-Yale," Gornet said. "It's really exciting coming in and sort of sticking it to 'em."

The Bulldogs came out for the first with energy, drawing a penalty less than six minutes into the frame. But the Crimson withstood the early pressure; at the 8:50 mark, the hosts were the ones to break the ice. An offensive-zone faceoff win — courtesy of sophomore Jack Badini, third-best on the draw in the country (65.3%) — saw Badini carry the puck behind the net and pass to rookie defenseman Jack Rathbone. Rathbone made no mistake, picking a corner to beat senior goaltender Sam Tucker and give his team a 1-0 lead.

Rathbone’s snipe is his second in 2019 (5–11—16), wrapping up a two-point weekend. The freshman finished the night with 6 shots to his stat line, pacing Harvard on a night with considerable shot volume (46 SOG).

"We have two [defensemen] that are horses out there in Fox and Marino," said head coach Ted Donato '91. "We have their two understudies in Rathbone and Walsh." 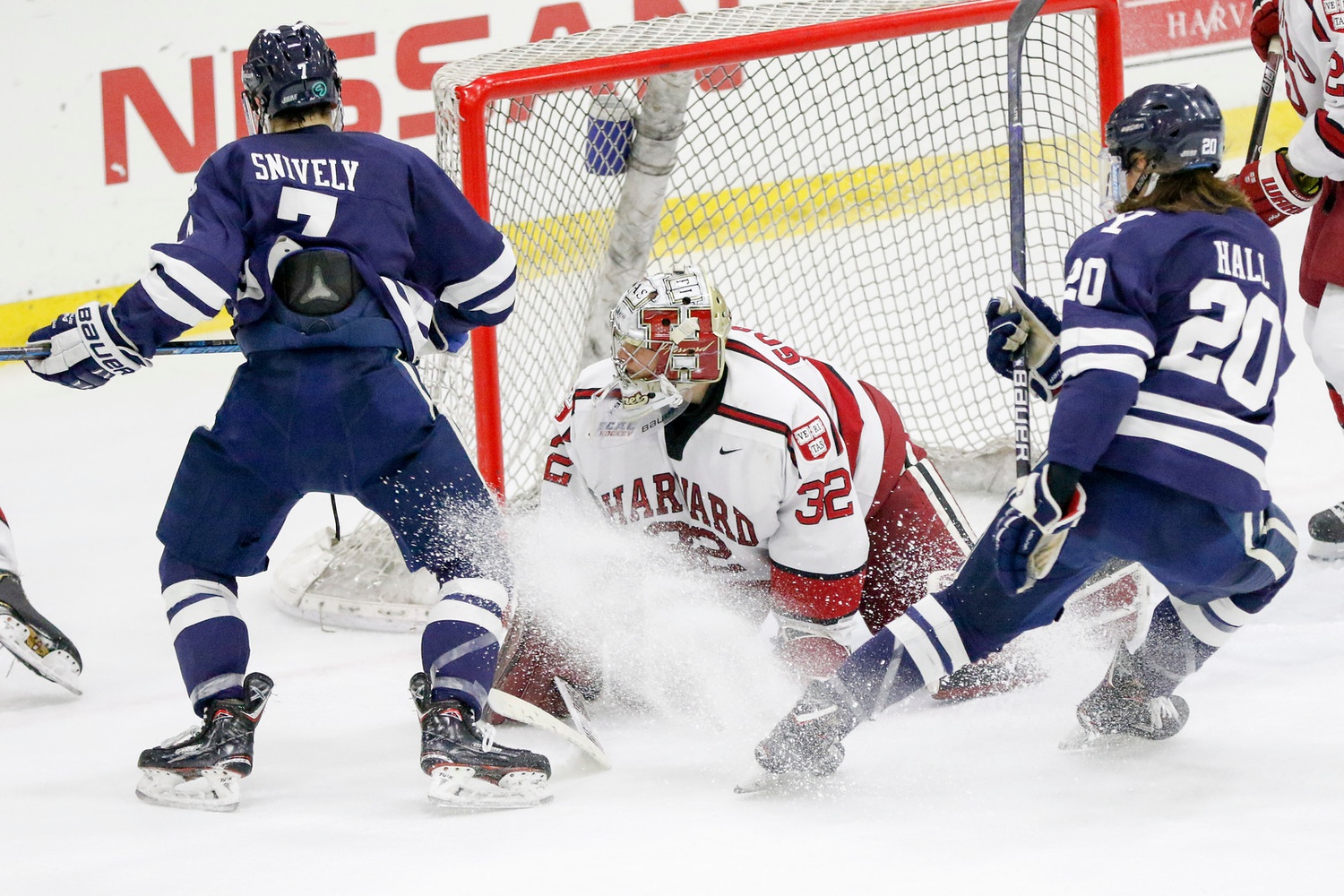 A flurry of penalties closed out the first period, with Yale freshman Justin Pearson taking a seat to cancel out a power play chance for his team. Having the better part of the man advantage to start the second, the Crimson sent out its top unit.

Sophomore blue-liner Reilly Walsh, the team’s leading power play goal-scorer, carried into the high slot only to hit the post with his shot. Junior defenseman Adam Fox was there to scoop up the rebound and dish it to co-captain Lewis Zerter-Gossage, who walked in on Tucker and fired it top-side.

The power play tally was Harvard’s second of the weekend after a recent dry spell, giving Zerter-Gossage his team-leading 16th goal of the season. The senior has netted six goals in his last eight games; though the season is far from finished, Zerter-Gossage has already set a career best for goal-scoring.

"I don't think we were great in the first period on the power play," coach Donato said. "When you have a successful power play...you've got to keep evolving as teams throw different coverages at you.... Tonight we scored a couple of goals, but we generated a lot of chances."

The middle frame featured no more scoring, with the Crimson holding a small edge in shots through the game thus far (24-21). Harvard very nearly found itself ahead by three goals — by a fraction of a second, in fact. Junior defender John Marino put the puck in the net just as the buzzer sounded, and after review the play was ruled no goal.

With just 20 minutes on the clock, Gornet saw another barrage of Bulldog attempts thrown his way, but the junior weathered the storm. The Crimson’s penalty kill is ranked a modest 47th of 60 NCAA teams (77.5%); however, the team did away with another Yale power play chance in the middle of the final frame, en route to a perfect 6-for-6 performance.

Once again, the PK received a helping hand as Bulldogs sophomore forward Dante Palecco was sent to the box for hooking. Harvard was on the man advantage not long after Palecco’s offense. The point-men combined in a play that has become a routine sight for Crimson fans, as Fox, avoiding a Yale player, backhanded the puck to a waiting Walsh. The sophomore’s one-timer zipped past Tucker, extending the hosts’ lead to 3-0.

A no-goal call once a game calls for a shrug and a quick recovery, but two is a surprise. Less than a minute later, Harvard fell prey to another video review, as an apparent tally for sophomore Jack Donato was waved off as a kick.

"You try to not let that affect how you play," Zerter-Gossage said. "Coaches always say, no matter what the result is, get back to the game plan. It's definitely tough, because you've got those thoughts, 'We could be up by one more goal,' but I think we handled it well and kept playing our game."

The final whistle gave Gornet (5 GP, 2.64 GAA, .920 SV%) his first career shutout, sealing a solid weekend for the junior (.969 SV%). Should Lackey remain sidelined for the close of the regular season next week, Gornet has proven that he is an able replacement. 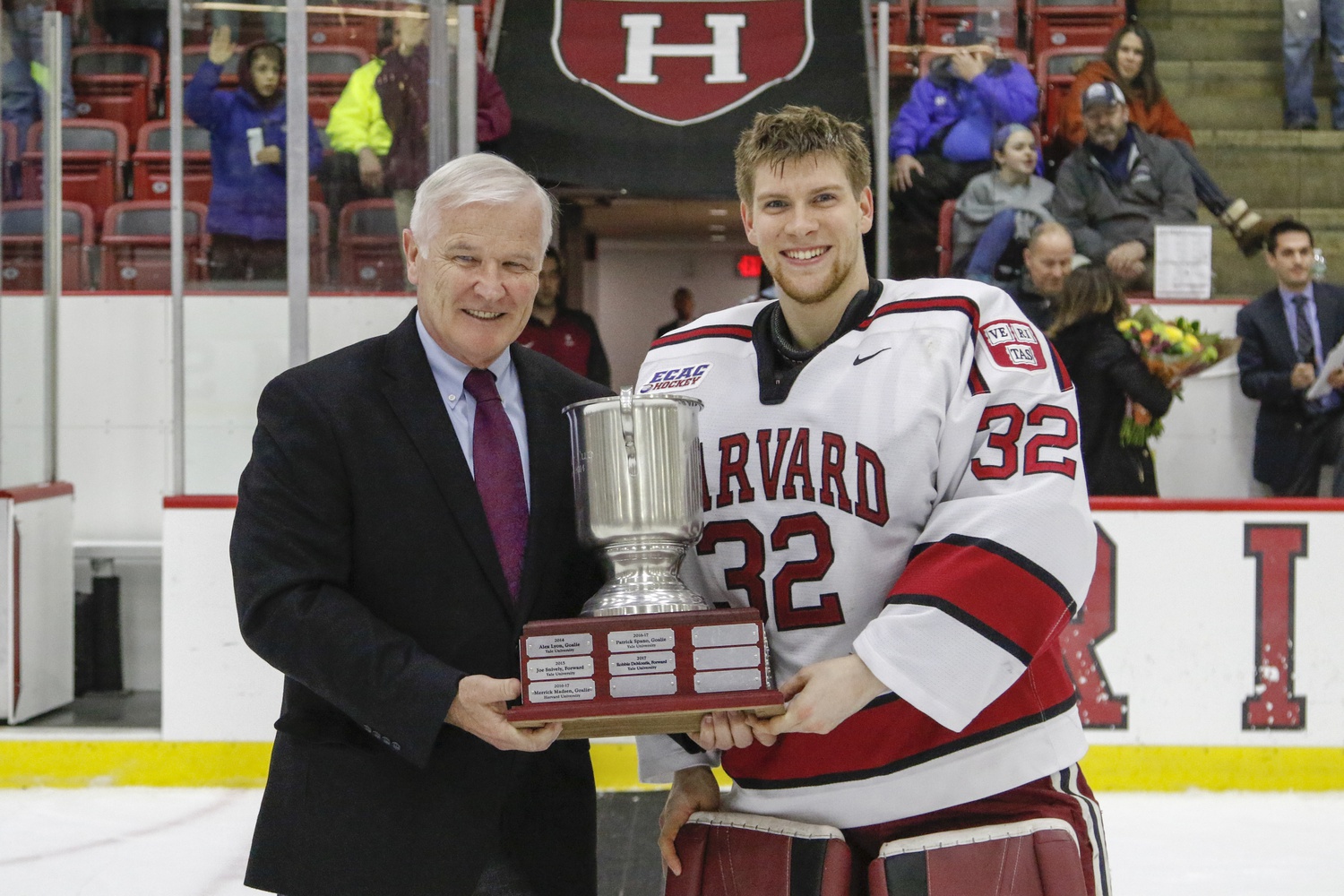 Gornet's performance won him the Tim Taylor Cup, named for the late Tim Taylor '63, who played for the Crimson and went on to coach the Bulldogs. By Timothy R. O'Meara

Several of Harvard’s key offensive contributors are also riding hot streaks. Walsh is running a seven-game point streak (3–7—10). Meanwhile, Fox earned his third three-point effort of the season, giving him 11 points (1–10—11) in his last six contests. The junior paces all players in assists per game (1.11), and also leads all defensemen in assists (30) and points per game (1.41). He and Walsh are first and second in team scoring respectively; the program hasn’t had two defensemen pace the team at the end of the season in the past 11 years.

"It's definitely a luxury to have the talent that we have as our final line of defense," said Zerter-Gossage on the defense corps as a whole. "When you can throw it back and trust that a play is going to be made...it's something that you kind of take for granted as the season goes along. All the points that they're racking up [are] definitely well-deserved, and I don't think it's going to go unnoticed how much they mean to our team offensively and defensively." 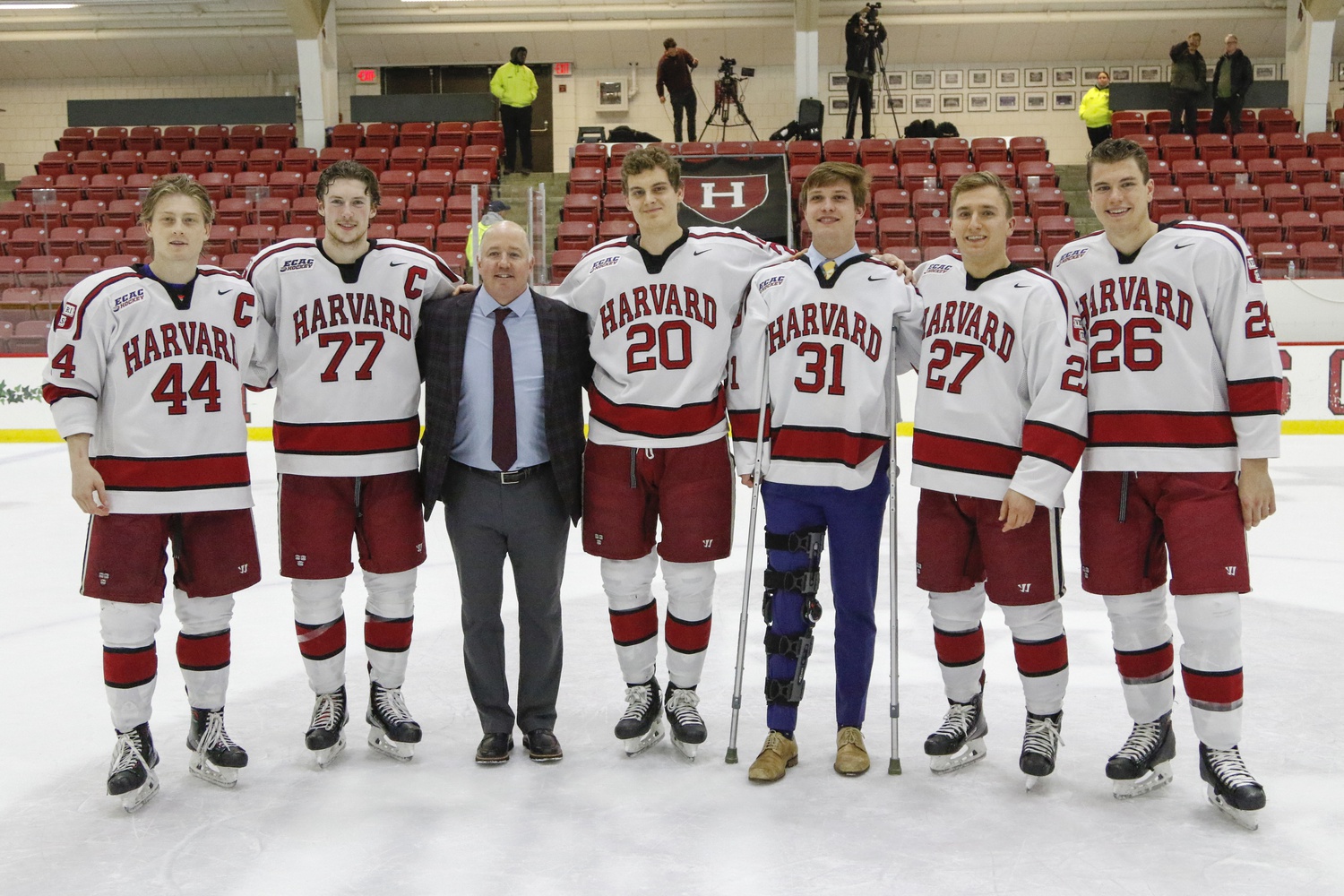 After this season, the Crimson will bid farewell to its six seniors. By Timothy R. O'Meara

The Crimson’s 2019 class also closed the book on the season at home on Saturday; aside from Lackey, the entire senior class dressed for the game. The emotion of Senior Night seems to fire up the team especially, as Harvard has triumphed on the last five occasions. Its seniors have been part of two NCAA Tournament runs, including a 2017 Frozen Four appearance, and won the ECAC Tournament and regular season in 2017 too. Zerter-Gossage leads his class in both career games played (121) and points (39–42—81) as of now.

"Every year when it's Senior Night you don't really think of how soon yours is coming," Zerter-Gossage said. "It's gone by really fast. The way that we handled the game, especially, played a full 60 and played the style that we really want to play going forward...was a really good way to send us off."

The Crimson’s second-place ECAC tie puts the team in a good position heading into its final weekend of play. Its last two contests are against RPI and No. 20 Union; wins against either team would complete a season sweep. More importantly Harvard is still in the running to win the conference outright, as leader Cornell sits only a point ahead and will face second-place Clarkson next week. With the top four ECAC teams neck and neck, anything can happen as the regular season comes to its end.