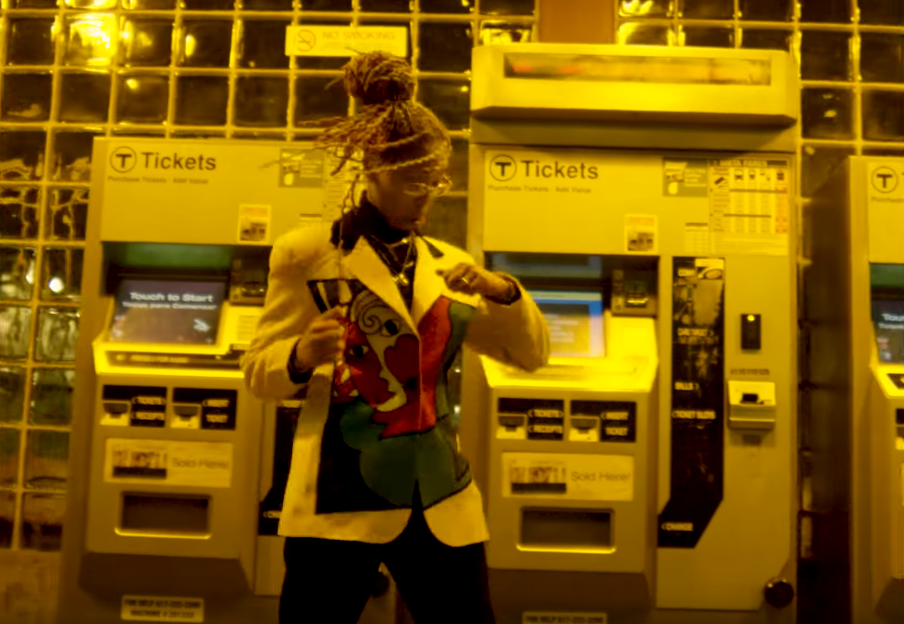 Vintage Lee in her video for “Hennything’s Possible.” By Courtesy of YouTube / Vintage Lee / Tee-WaTT

Boston may not be nationally recognized for its local rap scene, but that’s certainly not for lack of talent. Local rappers, as WBUR reports, have been largely shut out of performing at venues around the city, due to bias against the genre, performers, and fans. There are so many Boston rappers who are well-worth listening to — here’s a small sample of five great, relatively recent music videos from the local scene.

Dutch ReBelle stuns in this music video from her most recent album “Bang Bang” with her cool confidence, clever wordplay, and creative jokes (“Come shoot your shot and get hit with this boulder”), delivered over a beat constructed out of a glittering music box-like sample. The video is imaginatively set in an art gallery with different scenes portrayed as different moving paintings, which helps the visuals naturally segue. Dutch Rebelle has charm to spare — somehow she even makes a Red Sox cap look fashionable — and this release is a compelling demonstration of her prowess and presence.

In “Cheekbones,” a choice cut from Hopeadope’s recently released debut EP “Cute AF,” the rapper impresses with her flexible, imaginative flow and charming sexual candor and humor (“Make her legs go up and down / Then take her ass to brunch”) over a hypnotic house beat. The video, which features Hopeadope campily vamping in technicolor leotards, is equally creative and colorful. Hailing from Detroit, the now Boston-based rapper is bringing exciting new energy to the local scene.

Over a beat that sonically drops the listener into the middle of the boxing ring, Billy Dean Thomas (the self-proclaimed “Queer B.I.G.” ) lands blows (“White folks sleeping on me cause I’m brown / Why they pay less venue don’t reply”) with a fleet-footed flow. The video plays like a victory dance, alternating between shots of Thomas flexing in a slick self-branded boxing robe and sweatshirt and another dancer, who moves with kinetic abandon and a similar sense of hard-fought joy. This title track from Thomas’s debut EP strongly demonstrates their acumen and dexterity lyrically, sonically, and visually.

In Vintage Lee’s excellent single “Hennything’s Possible” from her 2017 debut album “PiMP,” she delivers a charmingly funny anthem to success, being yourself, and of course, Hennessy — with an easy swagger and natural charisma. The track boasts an excellent beat featuring a perfectly icy piano sample that nicely complements her verses. In the accompanying video, she casually dances at locations around her home neighborhood of Roxbury in a sharp yellow blazer with a painted cubist design. She has been receiving some well-deserved national attention particularly for this track, and it’s easy to see why.

In this uplifting track, local rapper and poet Oompa has created an anthem celebrating black and brown women and what they deserve, from joy to power. The track, from her powerfully moving 2016 debut album “November 3rd,” has a warm, lightly gospel sound, with a chipmunkified vocal sample floating helium-light. Oompa’s joyous celebration is resolutely inclusive and intersectional. She has shout-outs to both “hoes” and “CEOs,” as well as to “trans women, pan women, [and the] gender-non conforming.” She is joined by her frequent collaborator and fellow local rapper Cliff Notez, who celebrates his sisters with enthusiasm and pride in an energetic guest verse. The exceedingly charming video for the track was filmed by high school students participating in the Real to Reel Filmschool at RAW Art Works in Lynn. In the video Oompa raps and dances on the T, in front of the Museum of African American History in Roxbury, and in a classroom — she used to teach — among other locations. A number of local artists, including Billy Dean Thomas, make cameos; there’s a list of appearances at the end of the video. The video concludes with Oompa and Cliff Notez at a colorful rooftop party, radiating an easy, yet clearly hard-fought joy: A lovely conclusion to a beautiful, affecting song.

—Staff writer A.J. Cohn can be reached at adam.cohn@thecrimson.com.