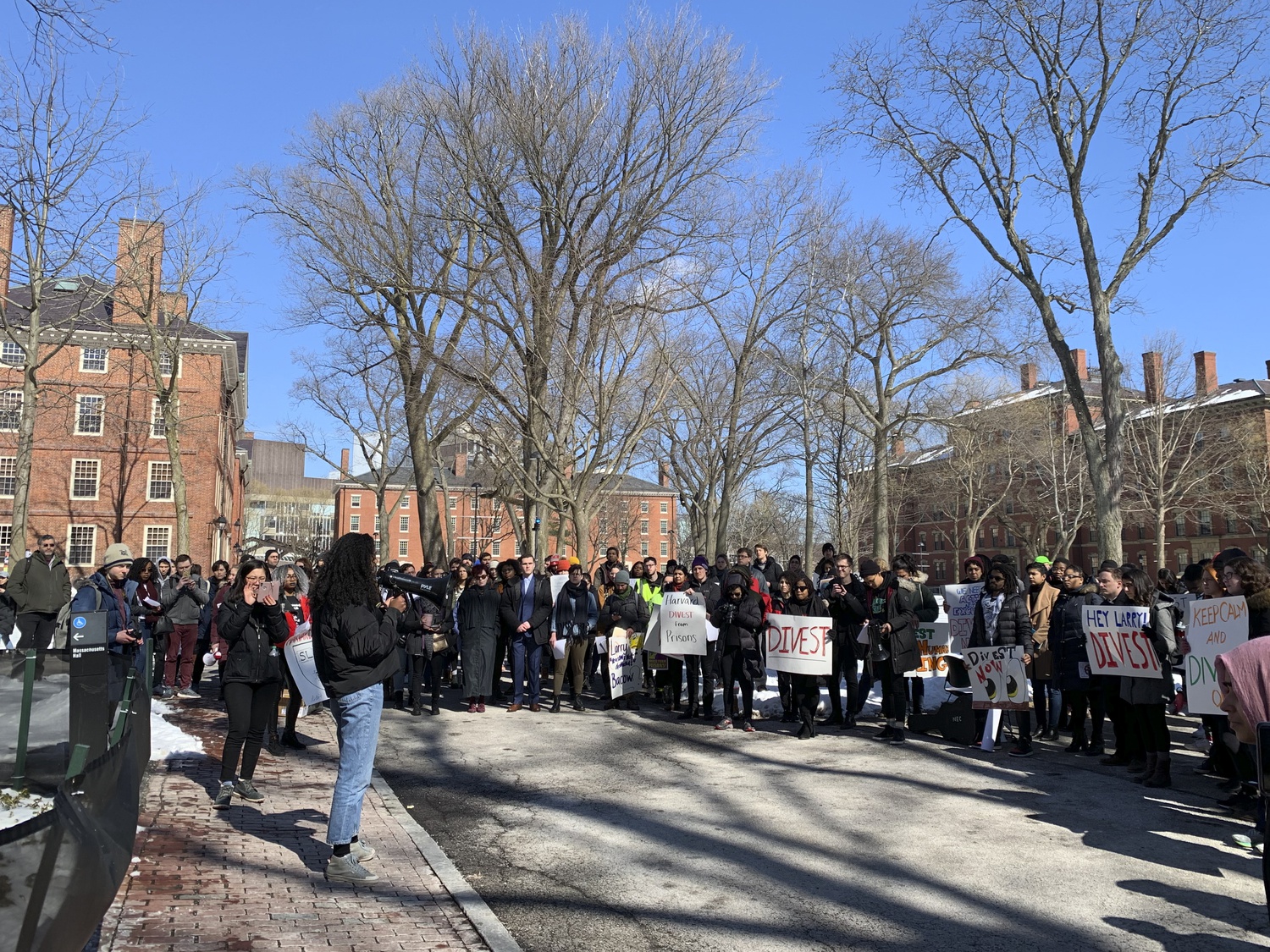 More than 100 Harvard affiliates gathered outside of Massachusetts Hall Friday to deliver a petition to University President Lawrence S. Bacow urging Harvard to disclose and divest its holdings in companies tied to the prison industry.

The rally was organized by the Harvard Prison Divestment Campaign, a pro-divestment organization founded in 2018, and the Harvard Organization for Prison Education and Advocacy, along with campus groups including Act on a Dream, the Black Students Association, and the Association of Black Harvard Women.

The petition, which has garnered nearly 3500 signatures since its release last month, calls on Bacow and the Harvard Management Company — the University’s investment arm — to withdraw its investments from companies with connections to prisons and disclose these endowment holdings to the public. The petition also demands the University reinvest this money towards programs and organizations that benefit “people directly impacted by the prison-industrial complex” in Boston and Cambridge.

Dharma B. Seda Gonzalez ’22, an organizer with the Harvard Prison Divestment Campaign, said the rally was a “culmination of months of work” for the students across Harvard’s schools involved in the movement.

"We're really proud that so many Harvard affiliates agree with us and believe that Harvard should divest,” Gonzalez said in an interview before the rally.

Those at the rally heard speeches from community organizers advocating against mass incarceration and written testimonies from currently incarcerated individuals. Attendees also sang songs like “We Shall Overcome,” and displayed signs with slogans such as “Build People Not Prisons.”

Ralliers braved the cold with enthusiastic chants, punctuating each speech with the words “Back out, Bacow, we want freedom, freedom, all these racist ass jails, we don’t need them, need them.”

University spokesperson Jonathan L. Swain referred to previous statements on divestment in response to the rally and petition.

“The University’s position, as it has stated previously, is that it should not use the endowment to achieve political ends, or particular policy ends,” Swain wrote in an emailed statement.

Since the petition was released, the Harvard Prison Divestment Campaign has built a coalition of support online and across Harvard’s campus. The campaign’s Facebook page currently has more that 700 followers. Professor of the Practice of Public Philosophy Cornel R. West ’74, a prominent scholar and commentator, signed onto the petition and released a statement calling Harvard’s divestment from the prison industry “a moral imperative.”

For several rally participants, the call for divestment was a personal one. During the rally, organizers encouraged attendees to say aloud the names of loved ones currently or formerly incarcerated.

“We do that as a reminder that it is not just about the dollars,” Harvard Law School student and organizer Anneke F. Dunbar-Gronke said. “There are people and lives.”

Harvard’s nearly $40 billion endowment has long been a point of contention for activists concerned with the University’s investments in fossil fuels and companies with connections to the prison industry. For decades, University presidents have reiterated that the endowment is not a means to enact social change — a talking point fiercely challenged by those pushing for divestment. The University did, however, divest from the tobacco industry in 1990.

“Bacow could do more to engage with us and really use his leadership in this situation and represent what his students want,” Buffins added.

Bacow met with activists from the Prison Divestment Campaign last week, a meeting during which he said he did not respond to “demands” but rather to “reason.”

Swain wrote in an emailed statement that in meetings with advocates, Bacow “has appreciated the opportunity to hear their views and perspective.”

Despite not meeting with Bacow Friday, organizers said they believe the rally demonstrated an increased momentum behind the prison divestment campaign.

"There was a lot of power here today and I can tell this energy is going to keep building,” Natanson said.