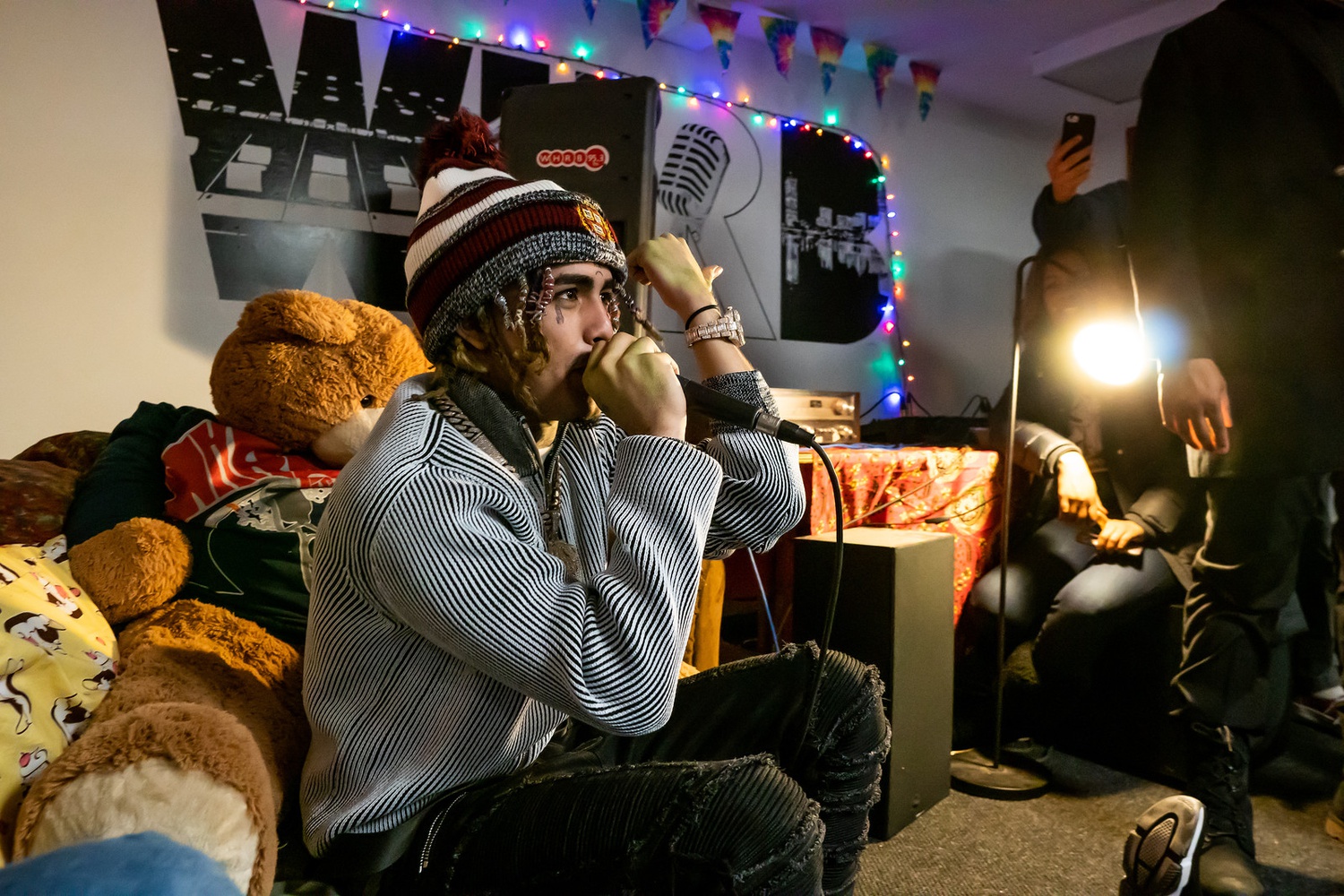 In an intimate setup in Studio B, WHRB member Griffin R. Andres ’21 conducted a live interview with the 18-year-old musician. After the interview, members of the Harvard community who were eager to gain some insider knowledge about Lil Pump participated in a direct Q&A session with the artist himself.

A pop-up shop selling “Harverd Dropout”-themed merchandise set up prior to the live interview and Q&A allowed students to get their hands on their own piece of Lil Pump. The merchandise included sweaters and shirts with a skeletal rendering of the artist in graduation regalia emblazoned on the front.

Students sought to gain some insight on the intersection between Lil Pump, who dropped out of high school, and Harvard. “I hope I just hear him talk about why he named it ‘Harverd Dropout,’ and get some meaning behind the lyrics,” said Madison R. Conklin ’21.

Lil Pump entered the room just after 9 p.m. to jubilant cheers and cries of his signature catchphrase, “Eskeetit,” a condensed version of “let’s get it.” He delivered a mock commencement speech, a follow-up to his initial — but since disputed — claim that he was named as Harvard’s official speaker for Commencement 2019.

Lil Pump employed the style and sentiments of a commencement speech to discuss his ascent to stardom. “It was by no means easy; there were many times when I thought I would not reach this finish line,” Lil Pump stated. “But those struggles have only made this moment even sweeter.”

An interview followed the speech, in which Lil Pump answered specific questions regarding his background and his songwriting process. As a child, Lil Pump explained that his parents did not have much influence on his musical stylings and preferences. “I ain’t listening to any of their music, I listen to my shit!” he said.

The artist also discussed his collaboration with Kanye West on the 2018 hit “I Love It.” Lil Pump attributed the music video costume design to West. “He, like, sent me a text message… and it was like some fucking stick figures in a box,” Pump said. “He’s like yo, I want this to be the costume! They drew it up, and that’s what it came out like.”

Lil Pump addressed a variety of questions posed during the Q&A session that aligned with his persona as a fictitious Harvard dropout. When asked his favorite city to perform in, Lil Pump responded with “Harvard.” The rapper at no point admitted that he did not attend Harvard University. When questioned as to why he chose to “drop out” of Harvard, Lil Pump said, “I dropped out of Harvard to save the fucking rap game!”

The collaboration with WHRB was intentional, according to WHRB President Kiran O. Hampton ’20. Hampton explained that Lil Pump’s team reached out to WHRB looking for a college-associated venue with an underground vibe to align with the style of Lil Pump’s newest album. “I told them WHRB is pretty underground — we’re literally in a basement. I also told them that beyond that, everyone in WHRB is really nice, and we include and welcome everyone,” Hampton said. “He liked that a lot — he’s a pretty inclusive guy and thought it was a good match.”

To an audience of eager Harvard students, Lil Pump’s presence kicked off the weekend. Some students were die-hard supporters of Pump, not just by virtue of his current fame, but because of his music. “I was a big fan of Pump’s work before he was signed,” Nicholas S. Brown ’22 said.

“I came out because I thought it was pretty cool that Harvard’s integrated into the hip-hop culture,” David M. Gonzalez ’22 said.