‘Endlings’ is a Luminous Story about Korean Sea Women, Identity in Art Making, and Wanting More 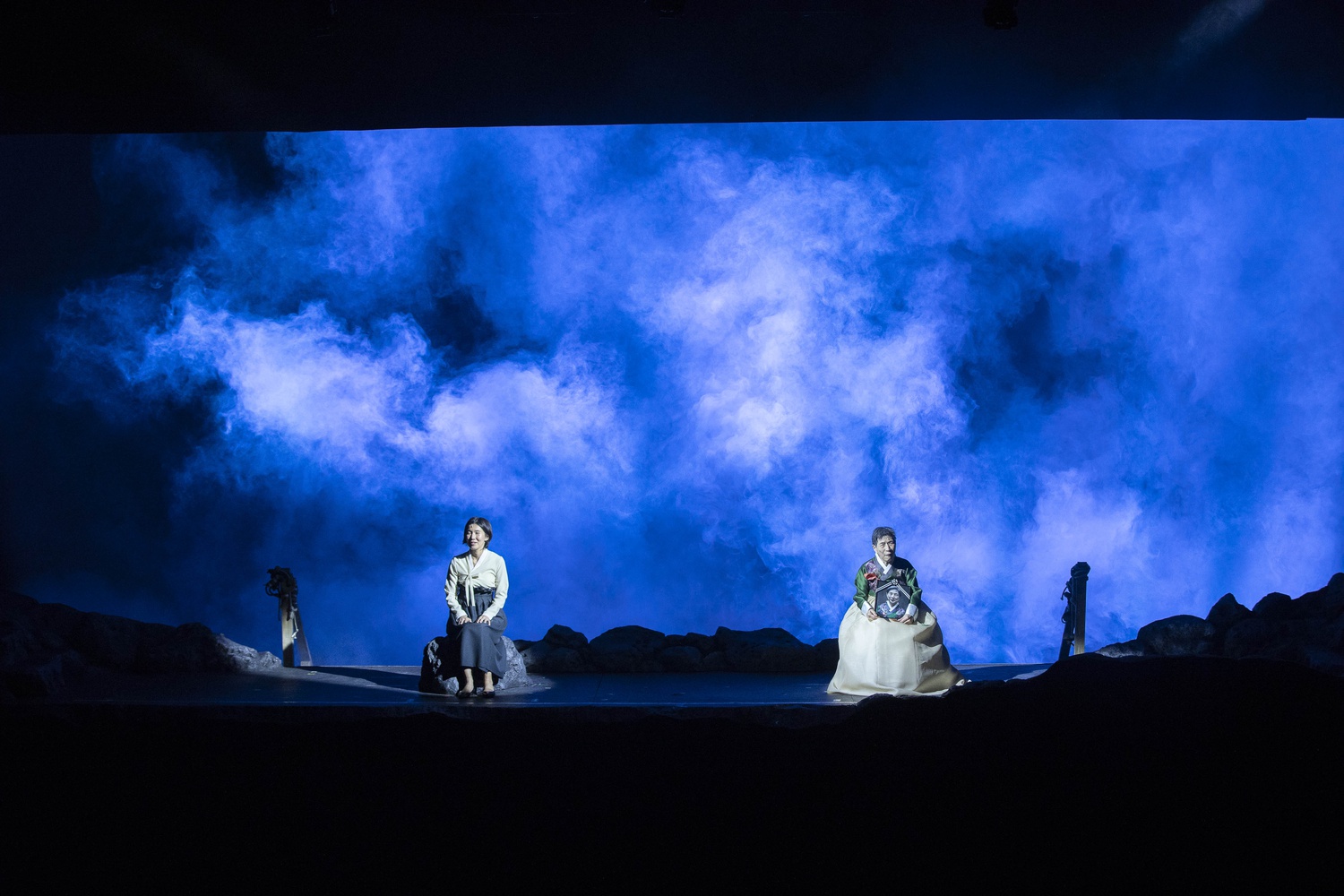 Celine Song used to write “white” plays. “I wanted the world around me to forget that I was an Asian, because it hurt too much to be seen,” Song wrote in the program for “Endlings.” “It made me feel ugly, unloved, and powerless. So I aligned myself with whiteness and patriarchy, both as a person and as an artist.”

But she broke that pattern with “Endlings.” “All I cared about were the words that made me feel good when I put them on the page: 언니… 할모니… 우리 이쁜이…,” Song wrote. The result was a story about three “haenyeos” (Korean divers) and a Korean-Canadian Manhattan-based playwright struggling with questions of “authenticity” in her art. “Endlings” is overwhelming with grief, caustic with its cynicism, and luminously full of story. Despite that Song thought her play would be “unproducible” (her stage directions require actors to dive and swim in “the ocean”), the American Repertory Theater realized it fully, and embedded a blue pool, backlit and ethereal, into the stage. It runs Feb. 26 through March 17 at the American Repertory Theater.

Song carefully tends to so many multitudes in her two-hour play, the first centering on the endlings themselves, the last known individuals of their species, the haenyeos. Go Min (Emily Kuroda), Han Sol (Wai Ching Ho), and Sook Ja (Jo Yang) are the last three Korean sea divers. They spend their days diving in the saltwater, peeling clams and seaweed from rocks around their island. These characters are sharp, and funny, and charismatic in their sardonicism. All older than 70 and the last remnants of a human tradition, they contemplate the temporality of their situation: “Who will inherit my life? No one, I hope. I wouldn’t wish it on anyone.” And yet, letting go is so bitterly difficult. When one haenyeo dies, another reflects. “That bitch. Going off to die before me. Younger than me. That’s fucking stupid,” Go Min says, trying to convince herself that she doesn’t miss her friend, who dies with no family, with only two other elderly sea women to remember her. But Go Min’s mourning is palpable, so intensely aching with sorrow in the undercurrent of the biting dialogue.

And her yearning is too. All three sea women have so much want: for a glimpse of the Manhattan skyline, for sex with a husband who died too young, for one’s grandchildren to never have to miss them across oceans and countries. “You miss your grandma? Your halmoni? Don’t,” Han Sol says over the phone. “I don’t miss you. I don’t miss you at all,” she lies.

On the other side of the world is Ha Young (Jiehae Park), a Korean-Canadian playwright living in Manhattan. Her story is not separate from the sea women’s — in fact, she is the woman writing about them, a sort of subversive, meta-commentary on the nature of playwriting. Young pulls the strings to their lives. She cheerfully narrates the haenyeos’ lives, introducing them with embarrassing optimism and simplicity, before pulling back into her own life and delivering a monologue about the story of her immigration. We don’t visit Young again until the second act, when she sits with her white husband (who literally wears a sign that says “White Husband”), and talks about writing the play.

This is when the story subverts itself, becoming more than a tale about three Korean sea women, but a tale about what it means to be writing about three Korean sea women as a Korean-Canadian Manhattanite. White Husband asks Young about why she wanted to write this play, and she bounces between different ideas (“I just wanted to tell… As a member of…”) before coming to her conclusion: “I was Machiavellian. I was cynical. I decided to write this play because I was trapped.” Young talks about accepting white patronage (“I took their money and free food…”) while needing to reject white gaze (“They wanted to devour me whole, like a wolf tracking a sheep”). “Endlings” isn’t just about the endlings. It’s about the struggle of writing plays for yourself but working in a system that requires you to write them for others. It’s about the question of “authenticity” in art.

“Endlings” grapples these questions a lot more gracefully than this review does, because while it deals with heavy topics, the play never loses sight of its characters or its story. “Endlings” is beautifully constructed from page to production. Its very set — a half subterranean masterpiece — is a testament to the ingenuity of stage design. And it’s always complicating itself with endless facets, trying to find ways to push both its architectural and storytelling boundaries further. In the first scene of the first act, the moon (or the sun), overwhelms the stage in all its luminescent glory. “Forget the ocean before it’s too late,” Go Min says. By the last scene, it’s clear that the daily work of the haenyeos is just one thread of the incredible network Song has strung across oceans and borders. In a moment that dissolves the rules of reality, Han Sol and Ha Young sit next to each other, talking about wanting: wanting to take up space, wanting to win, wanting to forget, wanting to be forgotten, but most importantly, wanting to just be. “Let me just exist,” they repeat to each other, with the full force of mist and smoke glowing behind them. “Let me just exist.”