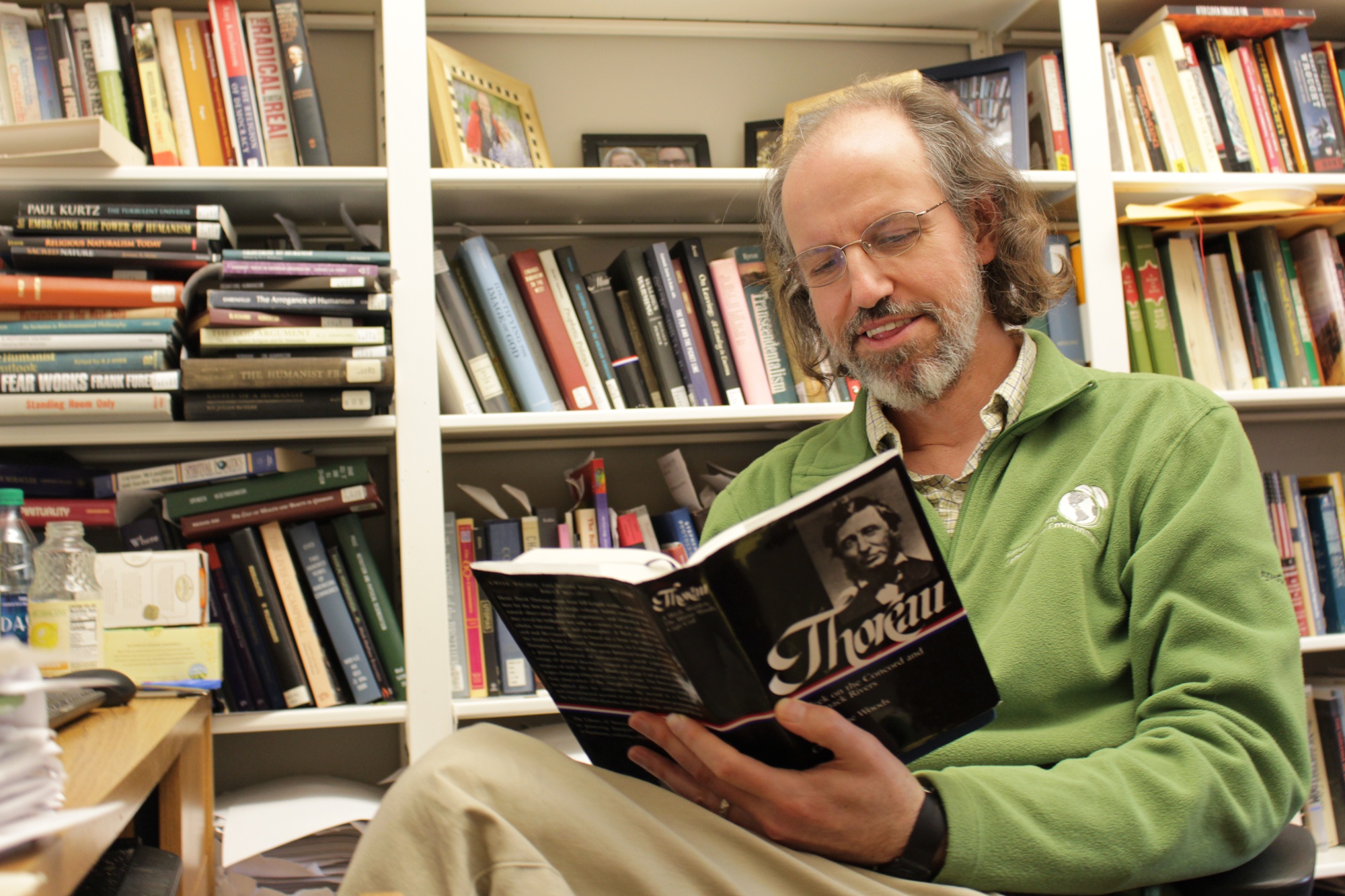 Dan P. McKanan’s ’89 work outlines anthroposophical teachings concerned with the biological and spiritual interconnectedness of agriculture. “There's an understanding that certain spiritual forces stream down to earth from various cosmic realms, and the farmer is working with those spiritual forces,” he explains.
By Hannah C. L. Ezer and Tyler T. Johnston

Several people have called Dan P. McKanan’s ’89 office a fire hazard. Stacks of books are crammed into every corner. Some are relics from his time in graduate school, both at Vanderbilt and the University of Chicago; others are renewed yearly from the Harvard Library.

McKanan is currently the Unitarian Universalist Senior Lecturer at the Divinity School where he teaches classes including HDS 2005: “Theology without God” and HDS 2773: “Religion and the Left.” Lying atop a stack of books in the center of the room is his most recent publication, “Eco-Alchemy: Anthroposophy and the History and Future of Environmentalism.” In the book, McKanan traces the environmental history of anthroposophy, a Christian spiritual tradition that dates back to the nineteenth century and is understood as a spiritual science rather than a religion.

McKanan’s path to anthroposophy was twofold: his early interest in both sustainable agriculture and intentional communities — a label which includes communes, kibbutzim, and ecovillages — led him to the spiritual philosophy.

His involvement with the former began while he was at graduate school. McKanan started working in community supported agriculture (CSA), a share-based and community-focused model of farming that offers greater insurance for farmers. He purchased a share in a farm and later learned it was a biodynamic farm, which is a form of alternative agriculture linked to anthroposophy. “In most major cities, the first CSA farm was biodynamic, because a very significant source for the CSA idea was people in the anthroposophical movement trying to connect the agricultural ideas of the movement with the economic ideas,” he explains.

In addition to agriculture, McKanan worked with intentional communities — groups of people living and working toward a common purpose. McKanan first joined the International Communal Studies Association because of his prior work studying the Camphill Movement. The movement aims to bring together children and adults with and without intellectual disabilities in supportive, residential communes and is based off of anthroposophical ideas.Today he chairs the ICSA’s board.

“It's kind of a model of reverse inclusion where instead of saying, ‘how can we make mainstream society, mainstream neighborhoods, more hospitable to the people with intellectual disabilities?’, the Camphill model is: ‘how do we create communities that center the distinctive needs and gifts of people with intellectual disabilities and invite other folks, people who are not labeled as having a disability, to share in the work of creating community?’” McKanan says.

McKanan resists common narratives in his study of intentional communities and anthroposophy. “One big debate in communal studies is about is the relationship between longevity and success: Is it appropriate to measure success in terms of longevity?” McKanan asks. “And I would say the majority of communal studies scholars are invested in the idea that you shouldn't [conflate the two], that a community can be successful even if it doesn't last very long.”

In addition to his study of anthroposophy, he also explores the intersection of spirituality and civic life through American political left. His 2013 monograph, “Prophetic Encounters: Religion and the American Radical Tradition” outlines the prominent and often-overlooked religious dimension to the American Left from the 19th century to the present. His goal, as he explains it, “[was] to correct the notion that all the religious energy is on the right side of the political divide.”

He also aims to add nuance to a generalized narrative that there is a sharp divide between the religious left and secular left. Instead, he argues that religion is often deeply intertwined with progressive movements and political beliefs. Though he acknowledges that the United States has been relatively successful in separating church and state institutionally, he often repeats a maxim learned from Martin E. Marty, his graduate school professor: Church and state ought to be separate, but religion and politics never can be.

Society doesn’t organize itself into neat categories such as religious and secular, McKanan believes. “Depending on how you define religion, people's deepest values are religious values," says McKanan. "And if you're not going to bring your deepest values to bear in your political engagements, what's the point of the politics?”