Even Though ‘Venezuela’ Repeats, Don’t Look Away 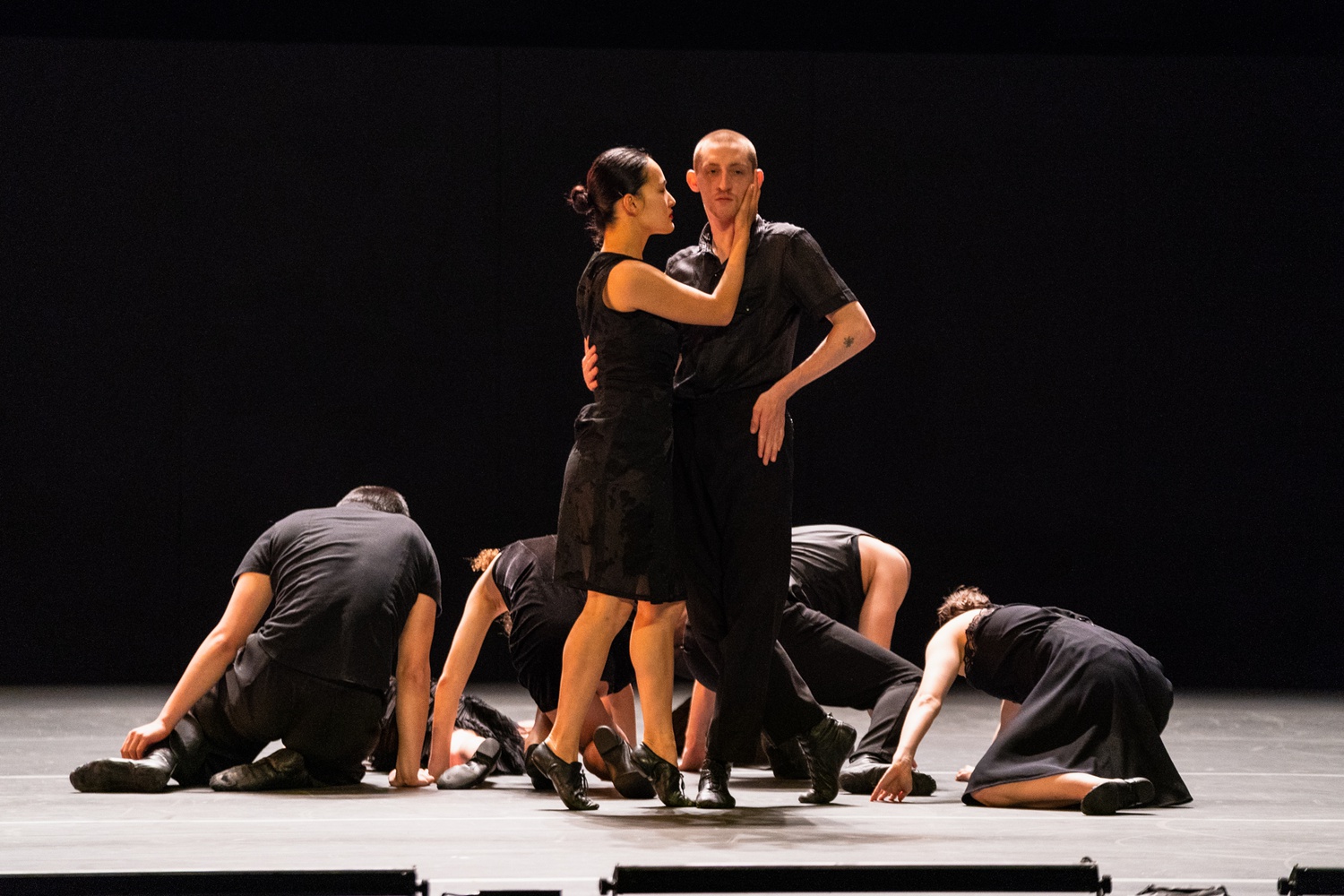 Watch any outstanding performance, and you’re bound to want to see it again. Especially in a meticulous dance performance with imperceptible gestures and surprising sounds, movement can become easily overwhelming and fleeting for the viewer, making the idea of a rewatch all the more enticing.

Similar to Naharin’s other choreographed performances, “Venezuela” breaks down into distinct sections within the 40-minute show. At the performance’s start, a clump of eight dancers face upstage and sway slowly. Eventually, they burst into rhythmic gestures and sensuous tangos. After a brief blackout, the four dancers straddle the backs of their partners who crawl up and down the stage, evoking the image of camel riders trekking gingerly through the desert. This slower section gives way to dancers rapping along to B.I.G.’s hit “Dead Wrong” and skipping frantically on and off the stage with the energy of children at the playground. At the end, dancers whip out flags in a mesmerizing unison section and finally showcase their individual solos.

As expected in a repeated performance, the second half of “Venezuela” closely parrots the sections from the first half. Even with an entirely new cast and changes in individual solos, the phrase work and movement quality stay eerily the same. Viewers can relish the opportunity to rewatch segments, such as the melodic skipping and the powerful flag beating, and scrutinize the performance for small details they may have missed the first time.

But keeping the two 40-minute segments entirely the same would be boring, which Naharin is well aware of. While the cast barely changes the actual movement, most of the production details dramatically shift. The trance-like Gregorian chants constant in the first half change to songs that arguably work better with the expressive movements. Heavy metal song “Bullet in the Head” by Rage Against the Machine accompanies the angry flag section while Indian folk song “Ae Ajnabi” by A.R. Rahman and Sampooran Singh Gulzar plays alongside the camel riders. Along with the refashioned music cues, lighting changes and new props make the viewer see supposedly similar sections with fresh eyes.

The skipping section, in which a flurry of dancers slowly pick up speed, emerges as a standout. In an impressive display of athletic endurance, dancers skip across the stage in random patterns without faltering, all the while remaining calm and playful. Batsheva’s dancers, known for their explosive gestures and uninhibited movement, shine as artists and athletes in the solo section. As a crescendoing harsh noise plays in the background, dancers move with unrelenting confidence, flexibility, and grace. The energizing solo section offers one of the rare moments in “Venezuela” where the company dancers can individually show off their breathtaking feats of control and emotion.

Repeating the dance also offers the audience a chance to revisit how Naharin peppers the performance with provoking details. During the second half of “Venezuela,” dancers intensify the types of props, by using flags with Palestine’s colors, and loudly rap controversial lyrics from B.I.G.’s hit “Dead Wrong” instead of just whispering it as they do in the first half. Depending on the audience’s knowledge of world politics and familiarity with English, these production choices impact viewers differently. While certain audience members might perceive the rap’s crude lyrics as offensive, others who have become used to similar lyrics might remain unaffected. And furthermore, if non-English speakers listened to the rap, such as when the company performed in Israel, audience members could tune out the lyrics all together.

Ultimately, such subjectivity means that the performance exists not just in two versions, but instead can be experienced in as many distinct ways as there are viewers. By confronting the audience with bold production choices that change depending on perspective, Naharin forces viewers to react instantaneously to the props, music, lighting, and movement, and to grapple with the fact that they perceive the performance through the lens of their own values.